Wednesday’s Would You Rather Question: Language or Music→

I know, it’s not Saturday and here I am writing you a letter. It’s a topsy-turvy sort of day in the kasbah and I’m going to run with it. Also, I’ve got some stuff to say and when I have stuff to say, it usually ends up as a journal entry or in a letter.

But first, what a couple of weeks you’ve had with all of the Star Trek: Into Darkness premieres, press junkets, and talk show interviews in London and America. You’re one busy guy, even hopping across the pond in the middle of filming Sherlock to appear on talk shows in the States.

About those American talk shows… yeah, the David Letterman interview is still haunting me, too:

“Are you new to making major motion pictures?”

“So when you spend time at [a high] altitude, does that do brain damage? Or is that just temporary?” (asked after you talked about hiking in Nepal) to which you turned to the audience, smiled, and gave the brilliant response, “Let the good people be the judge.”

Don’t worry, my shoulders should return to their normal state once they relax from all of the cringing I did on your behalf.

Stating the obvious, you are a far better person than I to graciously endure all of those inane questions. Some people (not naming names) would probably be banned from all future talk show interviews after responding with incredulous facial expressions and undignified answers generously sprinkled with expletives.

Had I known the abysmal state of my country’s talk shows (Ellen DeGeneres, my personal fave, aside), I would have sent advance warning to you. Deepest apologies for failing you, friend. I would say I owe you one but then you’d ask for directions to the writing cave and the game, though a bit more understated these days, is still most definitely on.

Nevertheless, I’ll attempt to make it up to you. I have come up with a short list of questions that, in my humble opinion, are decent alternatives to the questions you’re repeatedly asked during your interviews. Here are just a few off the top of my head:

Question #1: What swear words were going through your head when you were doing some of your own stunts in the movie? (Yes, I know, all of them will be bleeped out when the interview airs on t.v. That’s o.k. They can be for my ears only.) 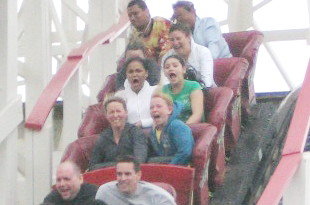 I do my own stunts, too.

Question #2: Did you get to keep any of the tight, form-fitting costumes you wore in the film? (Just wondering. No particular reason.) (Well, if you’re going to press me on it, I’m just trying to discern if you were inspired to create your own disguise collection after getting a glimpse my extensive one.) (Fine, yes, there are various other reasons, too. Let’s just leave it at that. Geez, you’re not supposed to interrogate the interviewer. Or make her blush.)

Question #3: If the up-coming Star Wars film were to be made into a musical comedy and J.J. Abrams offered you a key role in it, would you take it? (You often say you’re up for new challenges and what could be more challenging than singing while pushing the Millenium Falcon into hyperspace? Nothing, that’s what. Except maybe performing in the musical Top Grease and flying fighter planes. No, I haven’t written that script yet. I’ll get to it when you tell me you have some spare time coming up. Wait a second, how did this become an interview about me?)

Feel free to print these off and hand them to the next talk show host prior to the interview. Or if you prefer, I can interview you – in disguise, of course – since I know the questions by heart. Either way, any interview done henceforth will undoubtedly be a huge improvement over the Letterman Incident. You’re welcome.

The other reason I’m writing to you is because I finally went to see Into Darkness. In IMAX 3D. Which means I was literally sucked into outer space and dropped onto the Enterprise with you, Kirk, and Spock. I’m still feeling a little weak-kneed and jet-lagged, so my review will be brief and to the point:

I don’t believe any further explanation is necessary.

FOR THE LOVE OF STARS AND SPACESHIPS…  So Much Chilling, Villainous, Badassery To Savor Up Close.

On Such A Big Screen.

And In Surround Sound. 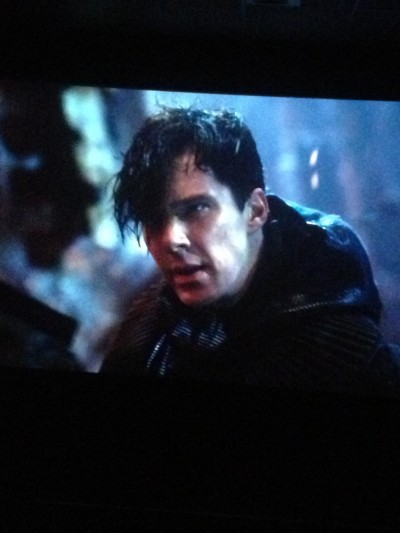 You can totally rock the ’80’s punk look, friend. In futuristic outer space no less. Your talent knows no boundaries.

If I were to take my review up another notch, I would say I’m glad I didn’t ruin my experience of the film by inadvertently stumbling across any spoilers before seeing it. I liked having a bit of mystery waiting for me as it started, even after waiting all that blasted time. I really loved how the complexity of the ethical and moral dilemmas allowed Kirk’s character arc to deepen in this film more so than in the first.

I also thoroughly enjoyed the snarky, witty banter between Kirk and Spock and comic relief from Scotty at just the right moments. Your performance was haunting – the perfect tone for a villain with a vengeance.

And then there were the scenes where John Harrison got under Captain Kirk’s skin with just a few disarming sentences delivered in that rich, deep voice.

My only complaint? There weren’t enough scenes like that.

There are tons of other reviews out there that can elaborate on the film’s merits better than I, so I’ll leave it at that. And besides, you know how I’m affected by your performances to give anything other than a blatantly biased account. I will say this, friend – even after all this time, I’m still incredibly inspired by the depth and range of your talent and your seemingly endless supply of passion for your craft.

Perhaps New York Times’ A.O. Scott says it best in his review of the film:

“Mr. Cumberbatch, pale and intense, has become the object of a global fan cult, and it’s easy to see why. He fuses Byronic charisma with an impatient, imperious intelligence that seems to raise the ambient I.Q. whenever he’s on screen.”

If this theory holds, I should have an I.Q. that’s off the charts and half way to outer space by now.

16 thoughts on “Dear Benedict: On Apologies, Interviews, & A Tiny Review”

Wednesday’s Would You Rather Question: Language or Music→