← The Cliffside Villages of the Cinque Terre

The super creative and talented Laird Sapir and I started a conversation on Twitter a while back in which we wondered what Shakespeare would have put on a mix tape if he had lived during the 80’s when making them for your paramour was all the rage. After much discussion, we decided he would have loved the big hair bands, glam rock and monster ballads and then created a playlist that you can listen to over at Laird’s blog.

Having solved that, we naturally began to wonder about what some of the other authors would have put on their mix tapes to their loved ones. Turns out we didn’t have to wonder for long. Virginia Woolf has been beatin’ down the kasbah door and has been lurking about over at Laird’s trying to get in on the Author Mix Tape Series. She’s even named her cover band – Ginny and the She-Woolfs – and has given herself a Cyndi Lauper-esque makeover in her persistent attempts to be heard. We eventually gave in and conceded to make her a playlist so she could get down with her bold self in the afterlife.

Here’s the run-down of Ginny and the She-Woolfs’ playlist that you’ll find when you click over to Laird’s blog where you’ll be able to listen to all of these great songs: 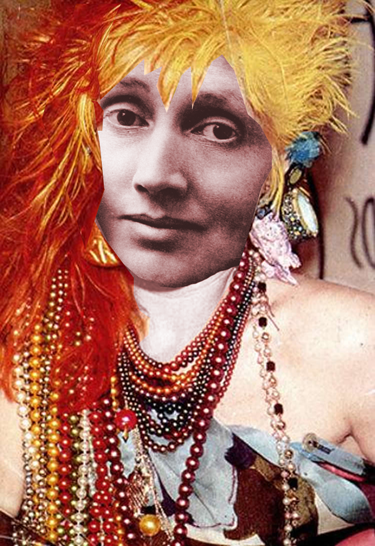 Go-Go’s: We Got the Beat

The Pointer Sisters: I’m So Excited

I hope y’all will hop over to Laird’s and get down with your bold selves, especially since it is a certain classy British actor’s birthday today. If that isn’t a reason to dance, then I don’t know what is.

8 thoughts on “If Virginia Woolf Made a Mix Tape”

← The Cliffside Villages of the Cinque Terre