← A Monkey, a Helicopter, and a Cup of Tea

Wednesday’s Would You Rather Question: Time or Money→

For those who have been hanging out in the kasbah with me for any length of time, you know how I love to do a bit of research about the places I’m going when I travel. A recent trip to the Wizarding World of Harry Potter (WWoHP) in Orlando, Florida was no exception. Since we were going to WWoHP for only one day, and because it is an extremely popular place to go in the summer months, I wanted to know the best way to see as much as possible before the crowds became too overwhelming. 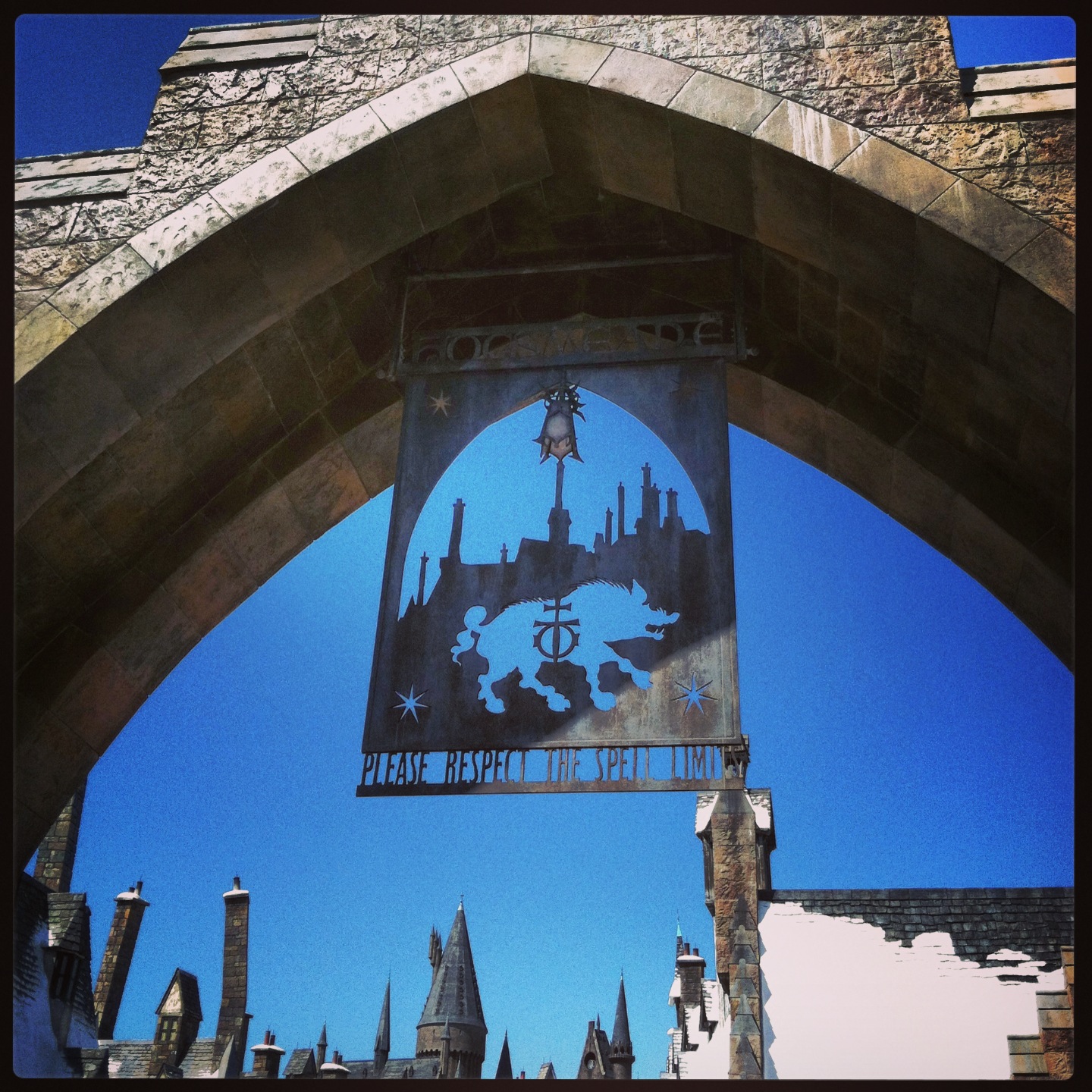 My nerdtastic research abilities took me to a number of websites and all of them agreed on one thing: get early admission tickets, do as much as you can before the mid-morning rush arrives, then go back again in the evening to see everything else. The website that I used the most in my planning was the Orlando Informer: Insider’s Guide to the Wizarding World of Harry Potter. This site has the skinny on the layout of the park, the best times of the year to go to the park, as well as strategies to minimize the amount of time you spend waiting in the lengthy lines for the rides. It was a veritable fountain of knowledge honed and crafted by some serious fans and theme park-goers. 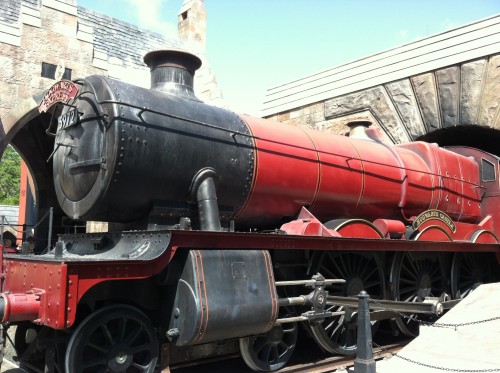 Luckily for you, magical readers, I am going to crack open my nerdy traveling notebook for you to share the strategies we used for getting the most out of our time at WWoHP.

Don’t argue, just do it. Seriously. I am not a package-deal kind of traveler, mostly because I don’t like the limitations that they place on me for crafting my own itinerary. BUT, if you book a package deal with Universal, you automatically get free early admission to the park. Early admission allows you to start your wizarding day off an hour earlier than the rest of those poor schleps who can’t get in the park until the official opening time. This means shorter lines and the chance to see more of Hogsmeade and the shops before the crowds begin to swell.

I, of course, did some independent research to see if buying separate hotel and park tickets would save me money. I thoroughly (and somewhat obsessively) scoured the interwebz and can tell you without a doubt that the Universal packages are a pretty sweet deal. There are hotels for every budget (we stayed at the Holiday Inn across the street from the park, thus eliminating the need to wait for shuttles). Simply go to the Universal website and start planning your adventure. Easy peasy.

2. Get up early and actually use the Early Admission tickets

I’d be lying if I said I wasn’t as excited as the 13 year-old about going to the Wizarding World of Harry Potter. That excitement was put to good use because it is what dragged me out of bed at the humid crack of dawn (o.k., maybe it wasn’t that early, but anything before 8am feels like the crack of dawn) so we could head over to the entrance to Islands of Adventure theme park (which contains WWoHP) to join the other Harry Potter fanatics in line for early admission to the park. 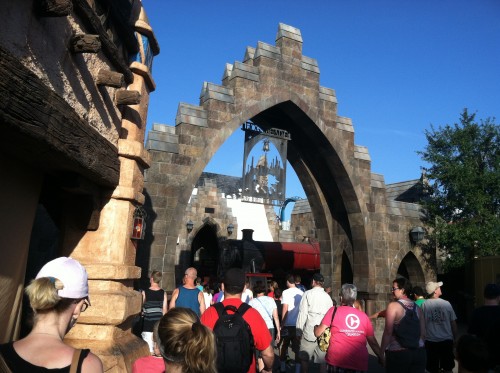 Fans of all ages were practically buzzing in anticipation at getting to see Harry Potter’s world come to life. Sure, there were a couple hundred of us waiting with our faces pressed against the clammy metal gates hungrily eyeing the Universal Studios workers for any signs we’d be let in soon. But that small crowd was nothing compared to the crowds that filled Hogsmeade by mid-morning, making it really challenging to not spill our Butterbeers on ourselves as we walked down the cobblestone street.

Bottom line: get up early, down your coffee as you hustle over to the gates, and savor the opportunity to see the amazing amount of detail put into creating Hogsmeade and Hogwarts castle before there are hoards of people blocking your way. You’ll be so glad you did.

Not every ride or attraction is open for early admission, but of the ones that are, the Forbidden Journey (the ride inside the castle) and Olivander’s Wand Shop are the two that will develop the longest lines in the shortest amount of time after the park opens. The wait in each line can be upwards of two hours of standing in the hot sun when the park is at its busiest. 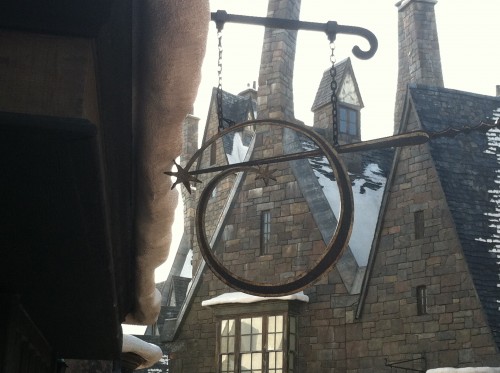 Armed with this knowledge, the 13 year-old and I planned ahead of time which of the two we would go to first. She was very clear that she absolutely needed to go to the wand shop to see Olivander and to buy her own wand. So we did just that. We scurried through Hogsmeade to Olivander’s and were the second group of 25 to enter the shop. By the time we were done there (a total of 30 mins, most of that spent deliberating on a wand), the Forbidden Journey ride line was already about an hour’s wait. We got in line for that because it was only going to get longer as the day went on.

After the Forbidden Journey, we went on a few other rides with relatively short lines and then had some time to pop in and out of the Hogsmeade shops before the crowds became too much to maneuver through.

4. Have a sense of humor, be kind to your fellow wizards, and have fun

That pretty much sums it up. Everyone is there for a love of Harry Potter and to experience it in a whole other way than the books and the movies. Remember that as the fifth person has stepped on your toe or elbowed you in the back. Remember that when you’ve been standing in line in the sun for an hour. Remember that as you notice all the kids of all ages looking to the adults for role models on how to maintain their patience.

Crowds are at their biggest in the middle of the day anywhere in the park. In the WWoHP, that is when it is most difficult to see anything. Numerous sites recommend going early and seeing/doing what you can, then leaving WWoHP and checking out the rest of Islands of Adventure (Jurassic Park is pretty fun as is the Marvel Comics section), then returning to WWoHP in the evening when the crowds have died down a bit. After seeing as much as we could in WWoHP, the 13 year-old and I wandered over to Jurassic Park for a fun water ride, snacked on some ice cream, found another water ride (by then it was really, really hot), and by late afternoon decided we’d had enough of theme parks for the day. 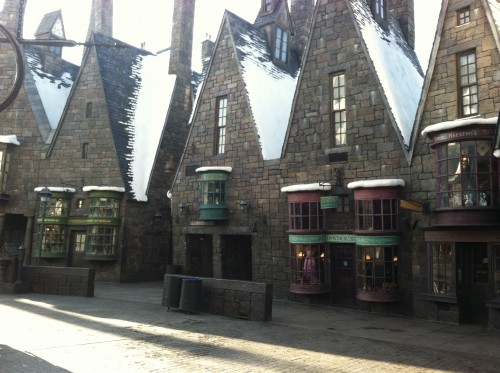 In the early stages of planning this trip, I worried we wouldn’t be able to do everything in one day and very nearly bought us the two-day pass. But in the end I’m glad I didn’t spend the extra money for another day at the park. We were able to see all of WWoHP in the span of a morning and had no need to return later in the day. Actually, we saw everything we wanted to see in Islands of Adventure and left just before a huge summer thunderstorm rolled in and closed many of the rides for a few hours anyway.

So, what were my favorite parts of WWoHP? Aside from EVERYTHING, I’ll break it down for you:

* The attention to detail in every cobblestone, shop window, costume, and magical element was amazing. I guess I shouldn’t be surprised since it’s a theme park owned by a Hollywood movie studio, but it was so realistic that you actually felt like you were in Hogsmeade and could at any moment run into Harry, Ron, and Hermione. 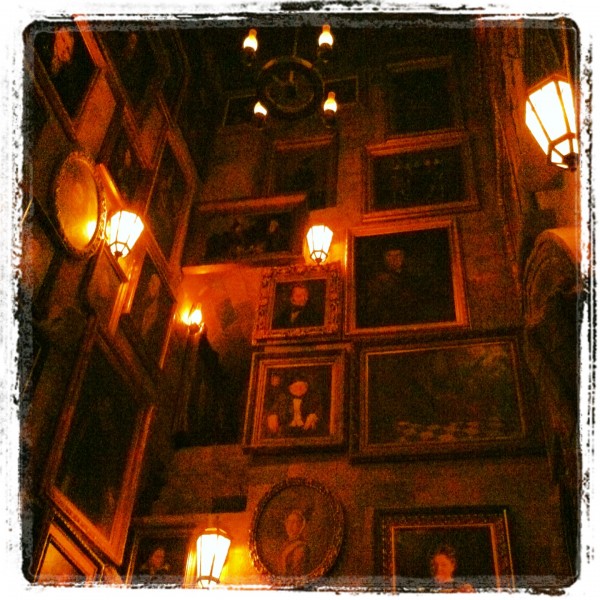 * Only 25 people can enter Olivander’s Wand Shop at any one time because once inside the darkened room, Olivander comes out, selects one kid from the crowd and just like in the book and first movie, helps him discover which wand is his (complete with subtle special effects that are so cool). Even though the 13 year-old wasn’t the “chosen one”, she loved experiencing this wand selection process and was even more fervent about finding her own wand. 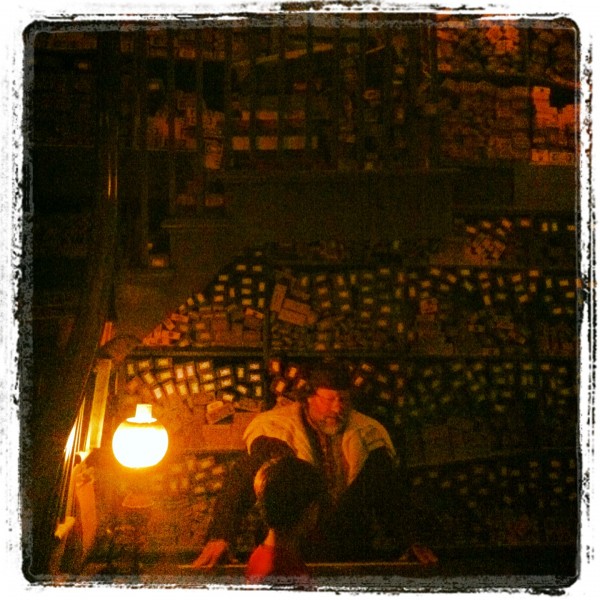 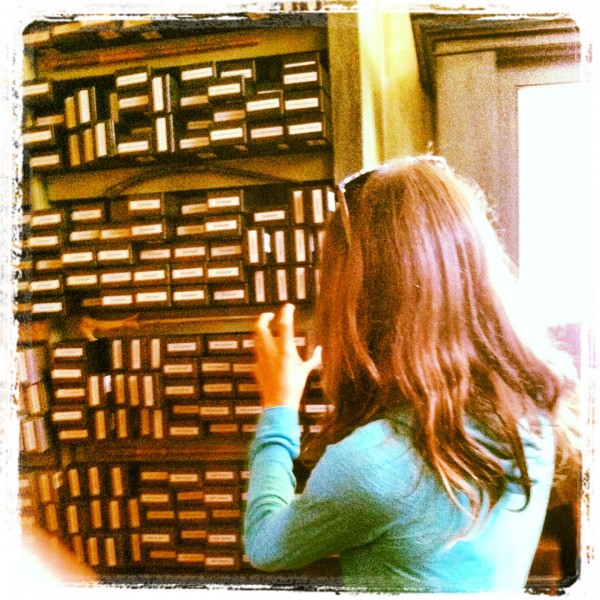 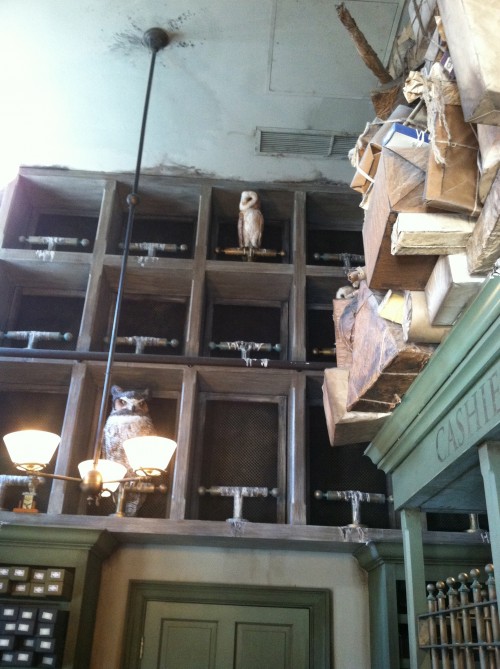 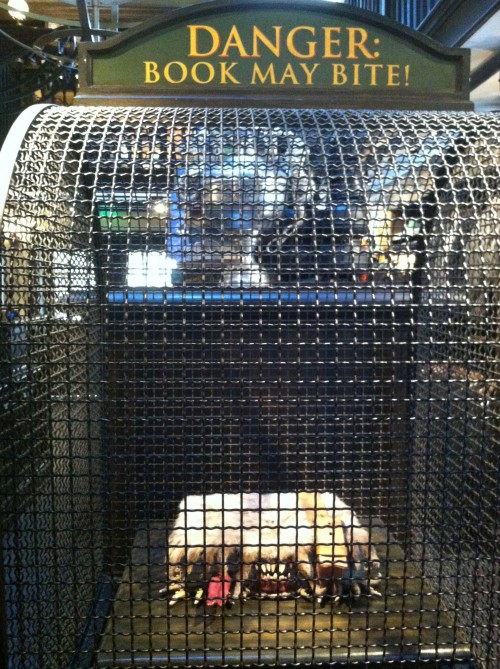 * Eating lunch at the Three Broomsticks (which was used as the set in the movies) and enjoying a butterbeer made the experience all the more fun. 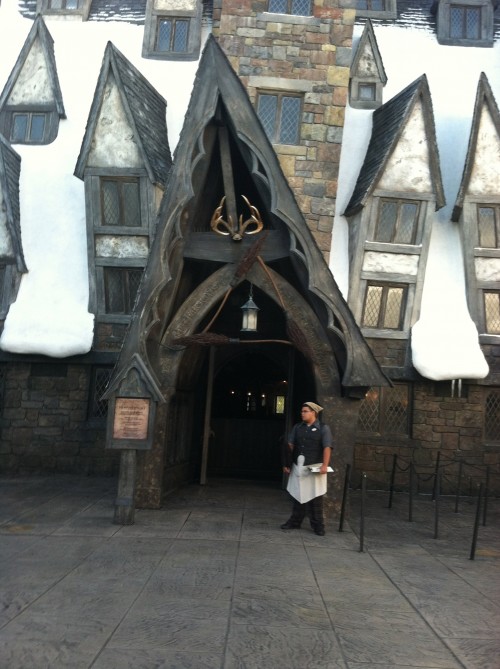 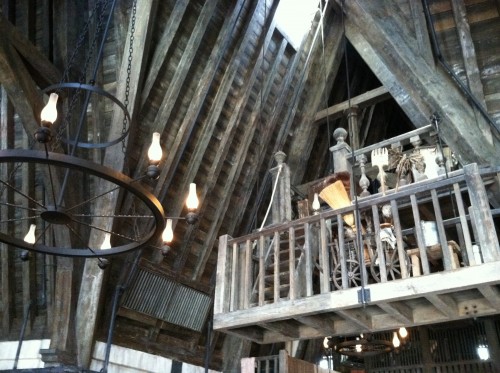 Inside the Three Broomsticks 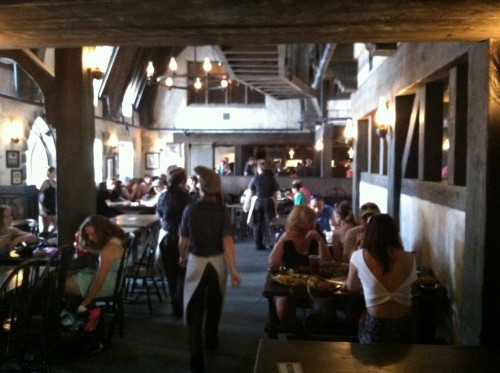 Inside the Three Broomsticks

* Zonko’s Joke Shoppe and Honeyduke’s Sweets Shoppe were the two stores you could go inside and shop around in, just like Harry and his pals could in the books. They were meticulously designed and decorated down to the last tiny detail. Next door to these shops were store fronts that contained animated figures or creatures. A Quick Quotes Quill feverishly scribbled away on a note pad in one window, while owls hooted in another. 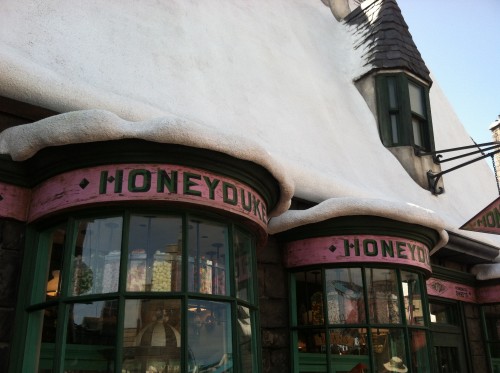 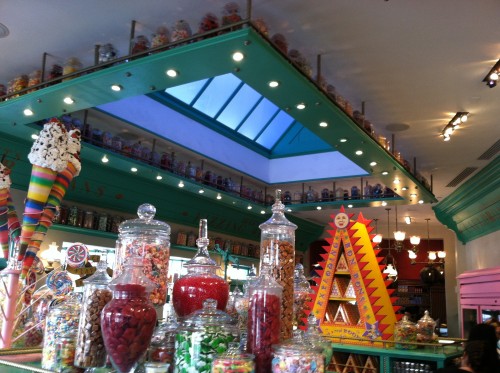 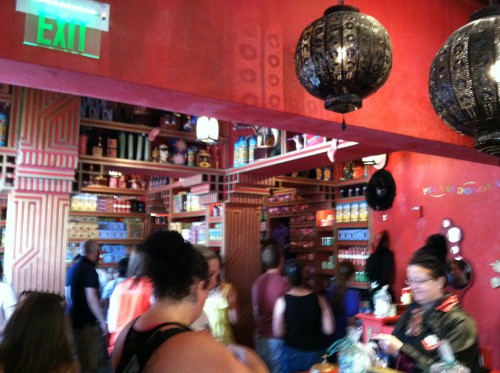 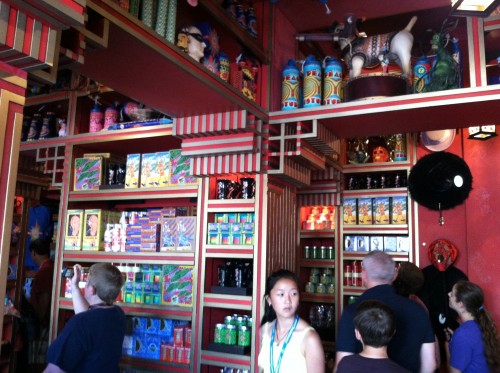 * The castle. It. Was. So. Cool. And the holograms of Harry, Ron, and Hermione inside one of the classrooms (that you wander through while waiting in line for the ride) are so realistic, I did a double take just to make sure the actors themselves hadn’t shown up for a special viewing just because me and the 13 year-old had traveled a gazillion miles to get there. 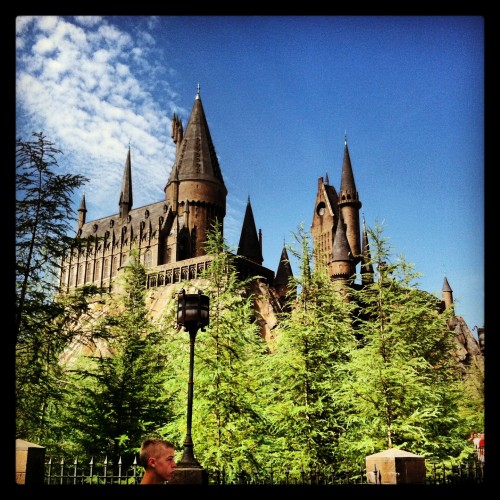 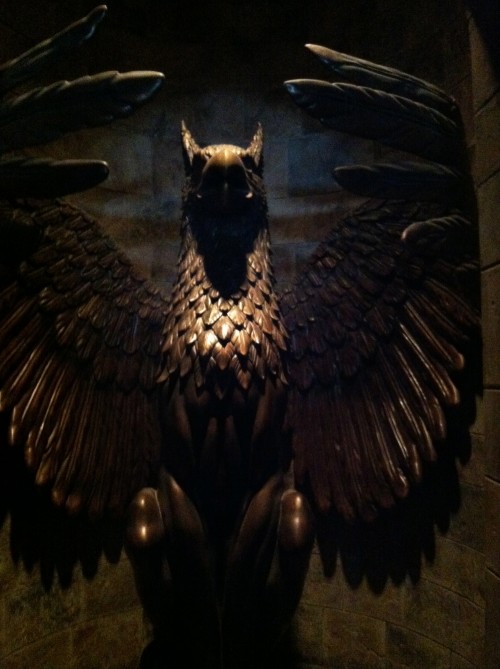 So, in the end was it worth the extra driving time from Savannah (where we had been visiting friends), expense, getting up early, and waiting in long lines? Absolutely. Do you need more than a day to enjoy the Wizarding World? Not in my opinion. Instead, save your dough for buying a wand, a broom, a Gryffindor uniform, an owl, a cauldron, some spell books, and a trunk to carry it all in.

Of the many Harry Potter fans out there, has anyone made it WWoHP? If so, what did you think of it? Anyone planning to go to the theme park in the near future? Have any of you perfected your apparating skillz or a supply of Floo powder they’d like to give me to make it easier to return someday soon? Hang up your cloak, then sit, sip, and share your wizarding thoughts. I always love to hear from you.

← A Monkey, a Helicopter, and a Cup of Tea

Wednesday’s Would You Rather Question: Time or Money→