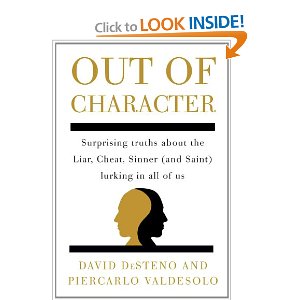 I recently finished reading the non-fiction book Out of Character: Surprising Truths About the Liar, Cheat, Sinner (and Saint) Lurking in All of Us by David DeSteno and Piercarlo Valdesolo. Usually I am more drawn to fiction books, but my book group had recently chosen a non-fiction book and I’m glad I had the chance to branch out a little and read something different.

The book jacket (and Amazon), gives this description: “A surprising look at the hidden forces driving the saint and sinner lurking in us all, Out of Character reveals why human behavior is so much more unpredictable than we ever realized.”

While the authors fail to directly provide in the text any statistical information for the reader (thought they do provide the list of published studies and experiments in the back of the book for the reader to look up on her own), I found myself very intrigued by some of the conclusions drawn by the authors:

2. The things we deem “bad” seem to hold more weight in our minds than those we deem “good”. When someone who seemed good/virtuous/honorable commits shameful, awful acts, our confidence in not only that person, but also in ourselves is shaken and we feel like we were fooled into believing their “good” image in the first place. With our confidence undermined, we begin to question our ability to judge others. We often come to the conclusion that the person’s true character must have been hidden from us before and now is revealed by his current fall from grace.

We rarely view one good act as proof someone had good character all along, yet most of us are ready and willing to do the reverse. Those marked as ‘bad’ can do something nice now and again and our opinion of them doesn’t change, but for a person of seeming high value, all it takes is one slip for us to claim that his or her character is inherently flawed.

3. Throughout our evolution as humans, in order to survive we had to categorize other humans based on their behaviors. (For example: I saw that guy from the other tribe wielding a machete against my tribemate for no apparent reason when we were out hunting, therefore that guy is a homicidal maniac and should be avoided.) According to the authors, this has led to us labeling our fellow humans as having one inflexible character trait or another.

Our minds ‘see’ different colors of character – noble, sleazy, trustworthy, unreliable – based on certain actions, but then make the mistake of assigning a person that label unequivocally. So if we define a person as noble and then she does something petty, we assume she’s acting out of character. In our minds, noble, just like purple, is a distinct category; it can’t bleed over into something else.

4. Character is varied and travels along a continuum based on our psychological needs and the push/pull of our selfless (or long-term, planful) and selfish (or short-term, immediate) desires. None of us is “fixed” in one state for long. External factors and internal interpretations of those factors move us back and forth along the continuum, influencing our choices and ultimately, our behaviors.

So-called swings in character are to be expected; exceptions are the rule. There are no firm boundaries for character, only a scale that can shift, and shift quickly, moving us to a new ‘color’ along the spectrum of vice and virtue.

5. The authors point out that once you’ve accepted that character is flexible and that there are distinct psychological mechanisms at work competing to drive your behavior,  you can begin to look at how you can influence your behavior. They are quick to point out that willpower alone is not the answer because we can’t solely rely on instincts nor can we rely solely on our sense of reason. According to the authors, both are susceptible to external influences, our prior experiences and our internal state of mind. Rather, we should be looking out for subtle cues (e.g. current emotional state, awareness of what all of our senses are picking up) that may drive us to making certain choices. 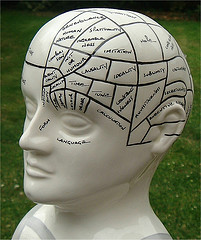 All of this psychological examination got me thinking not only about the out of character things I’ve done in my own life (that’s a post for another time, readers), but also about the protagonist in the novel I am currently working on and how I portray the various aspects of her character. I started thinking about her character on the continuum that the authors wrote about – not just what she would predictably do given XYZ situation (because that would be in character for her and therefore more believable) – but rather what would seem out of character for her, what would give her a higher level of dimensionality that is truer to who we are as people and to who she is in the story.

Taking it a step further, what about the antagonist in my story? What could I have her do/think/say that would give the story a less predictable course and more dramatic tension? Is it o.k. to have more than one character behave out of character or does that muddle the whole thing into an unbelievable, and therefore unreadable, story?

Obviously, I have a lot to think about.

What about you, intelligent readers? Do you like to read stories with characters that do something out of character or is it too jarring or unbelievable? And for the writers among us, have you ever experimented with having your characters behave uncharacteristically? Has it helped or hindered your writing process or story? What do you all think about the authors’ conclusions that I’ve highlighted above? I’d love to hear about it!

10 thoughts on “The Flexibility of Character”