← Visiting Old Friends Between the Pages Once Again

Wednesday’s Would You Rather Question: Thoughts or Emotions?→

Tender Is The Night is the second book on my list of 50 classic books I’ve chosen to read as part of The Classics Club Challenge (which you can read more about here). I chose it because I really enjoyed The Great Gatsby and wanted to read more by F. Scott Fitzgerald. 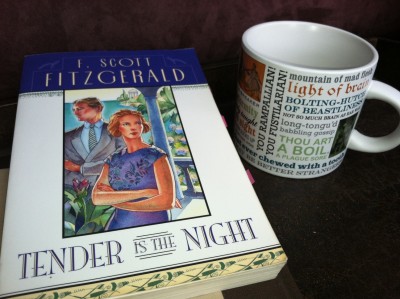 A literary vignette: Fitzgerald and my Shakespearean insults mug.

Here’s the Amazon synopsis: Set on the French Riviera in the late 1920s, Tender Is the Night is the tragic romance of the young actress Rosemary Hoyt and the stylish American couple Dick and Nicole Diver. A brilliant young psychiatrist at the time of his marriage, Dick is both husband and doctor to Nicole, whose wealth goads him into a lifestyle not his own, and whose growing strength highlights Dick’s harrowing demise.

Dick is eventually ruined–professionally, emotionally, and spiritually–by his union with Nicole. Of all his novels, Tender Is the Night is arguably the one closest to his heart. As he himself wrote, “Gatsby was a tour de force, but this is a confession of faith.”

Tender Is The Night is touted as a semi-autobiographical book for Fitzgerald whose wife, Zelda, was struggling with her own mental health issues at the time this was written. It is even said that the clinic in Switzerland where Dick Diver was practicing was inspired by the Swiss institution where Zelda had been hospitalized.

I’m probably committing literary blasphemy typing this since Tender Is The Night is hailed as one of the Fitzgerald’s greatest novels and I’ll be struck down by a bada$$ librarian/English major wielding a taser in the shape of a book, but… I just didn’t care for this one. Perhaps I’m taking the content too literally and not seeing the thematic forest for the trees. I’ll concede there were some beautifully written passages and Fitzgerald’s lyrical writing is superb. It’s through Dick Diver’s inevitable downfall Fitzgerald wove what was undoubtedly his own deep sadness at watching the woman he loved being tormented by her own mind and being powerless to stop it. This, in my opinion, is Fitzgerald’s greatest achievement with this novel.

The descriptions of the parties and socializing that took place on the French Riviera in the 1920’s were so well crafted I could almost feel the breeze blowing across the sea and sun-warmed sand beneath my feet. Fitzgerald masterfully evokes such vivd imagery that you can’t help but be drawn in and feel like you’re a guest at the gatherings, eavesdropping on the conversations and casually spying on the other guests.

On the flip side, however, I had a really hard time looking past a few things that just didn’t sit well with me. Like the way Dick Diver seriously crossed some ethical and professional boundaries by being the doctor for his wife’s mental health treatment. Or the way Nicole’s initial diagnosis came about and later, when it’s revealed why she had her initial breakdown, how that reason is simply overlooked. And then there’s Rosemary, the up and coming Hollywood starlet who is practically shoved into the arms of the very married Dr. Diver by her own mother.

I’m probably missing the point of this story and am showing my literary ignorance with this review. I really did want to like this book. I truly did. But… I simply didn’t.

Sorry, Fitz. I’ll give your other books a try and won’t hold this one against you. Promise.

Up next on The Classics Club Challenge List: The Shadow of the Wind by Carlos Ruiz Zafón.

Now it’s your turn: have you read Tender Is The Night? If so, what did you think of it? If not, have you read any other of Fitzgerald’s books? Do you have a favorite? Are you reading any classic books right now? Sit, sip, and share. Don’t be shy. I always love hearing from you.

6 thoughts on “Tender Is The Night by F. Scott Fitzgerald: A Classics Club Review”

← Visiting Old Friends Between the Pages Once Again

Wednesday’s Would You Rather Question: Thoughts or Emotions?→