← Wednesday’s Would You Rather: Vast & Shallow vs Deep & Narrow

The End, For Now→

I recently signed up for the Classics Club Book Challenge (you can read more about that here) and chose Franny and Zooey by J.D. Salinger as my first book out of the fifty on my list to read. Franny and Zooey is actually two interrelated stories that were first published in the 1950’s in The New Yorker magazine, and then later combined in book form in 1961. 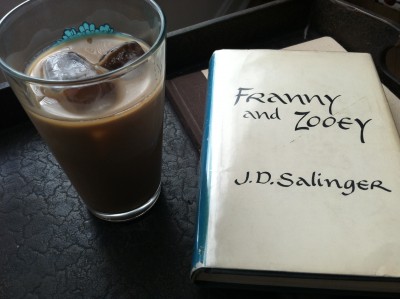 A little Salinger with my iced mocha

In the first story, aptly titled Franny, we meet its namesake narrator. Franny is a highly intellectualized and brilliant college-age girl who is visiting her boyfriend, Lane, at Yale for the weekend. The whole of her story primarily takes place in a cafe where Franny tries to explain to Lane how she has recently read a book about a Russian monk who discovers the “Jesus prayer” and how by repeating it without stopping, it will become a part of you and ultimately bring you inner peace. Interspersed in her explanation of the prayer is her frustration with what she sees as the arrogance and idiocy of teachers and classmates, and the phoniness that seems to surround her everywhere on campus.

Lane doesn’t quite understand what Franny is trying to say and pulls back from her in the conversation. This only makes Franny try harder to explain where she’s coming from and why she’s wanting to say the prayer over and over. Eventually, she excuses herself to go to the bathroom (all the while whispering the prayer under her breath) and on the way there collapses in a nervous breakdown. When she wakes up, she is still quietly and repetitively saying the prayer.

In the second story, Zooey, we meet Franny’s next older brother, in the family’s New York City apartment where Franny is now recovering from her breakdown. Franny and Zooey are the youngest of seven children, all of whom were once kid geniuses who appeared on popular radio quiz shows. In this longer portion of the book, we are taken deeper into the dysfunction of the Glass family and how the Glass children each has coped with their overly intellectualized upbringing. Zooey seems to have similar views about the world as Franny but, as the reader discovers through their lengthy, philosophical discussions, appears to be in a better emotional state to live with it.

Without revealing too much and subsequently spoiling the ending, Zooey finds a way to overcome his own self-destructive demons to reach out to his sister and help her recover.

At first, I didn’t think I was going like this book as much as I liked Catcher in the Rye. I felt like I was dropped into Franny’s story without enough information to really connect with her before she had her breakdown. But the further I got into the book, and especially into Zooey’s part where the dysfunctional family dynamics and expertly interwoven backstories were revealed, I grew to like it more and more.

Both Franny and Zooey have striking similarities to Holden Caulfield, but are different enough so you don’t feel like you’re reading Catcher only with differently named characters. At the center of both books is the question of how do we live an ethical life in spite of being surrounded by a world filled with unethical people who lack integrity or are choosing to remain ignorant to the corruptness around us? Zooey attempts to help Franny see that above all, even though she can’t change everyone around her (and attempting to do so is its own form of egotism and arrogance), she can live her own ethical life with integrity for no other reason than it’s the right thing to do.

For a short book, it packed a lot of philosophical punches into tightly turned prose. Color me envious, Salinger. Oh, how I crave to be able to write like that. Someday…

Whenever I read a book, I like to place little post-its on the pages where I find a particularly interesting turn of phrase, sentence, or, at times, an entire paragraph that I envy the author for crafting. Here are a couple such gems from Franny and Zooey:

I loved this description of Franny and Zooey’s mother: “The door opened, and Mrs. Glass, a medium-stout woman in a hairnet, sidled into the bathroom. Her age, under any circumstance, was fiercely indeterminate, but never more so than when she was wearing a hairnet. Her entrances into rooms were usually verbal as well as physical.”

And this one of Zooey speaking to Franny: “An artist’s only concern is to shoot for some kind of perfection, and on his own terms, not anyone else’s.”

Overall, I really enjoyed the book once I became absorbed in the main characters backstories. Salinger’s talent at showing the reader a character’s flaws and personalities through sharp, witty dialogue and creative descriptions is something I greatly admire and strive for in my own writing. I also appreciated how he was able to take what could have easily been the self-indulgent and dry existential angst of two young adults and instead crafted complex and relatable characters grappling with profound philosophical and ethical questions that many, if not all, of us have at least considered and struggled with from time to time.

Next up from the list of 50 classics: Tender is the Night by F. Scott Fitzgerald.

Any Franny and Zooey fans or J.D. Salinger fans out there? If you’ve read it, what were your impressions? If you haven’t read it, would you pick it up now? Sit, sip, and share. I always love to hear from you.

8 thoughts on “Franny and Zooey by J.D. Salinger: A Classics Club Book Review”

← Wednesday’s Would You Rather: Vast & Shallow vs Deep & Narrow

The End, For Now→