← Wednesday’s Would You Rather Question: Near or Far

Wednesday’s Would You Rather Question: Romances or Finances→

This week’s Friday prompt amongst my writer/blogger friends is:

If you could have one magical item, what would it be and why?

I considered many a magical object when pondering this question. Having just been to the Wizarding World of Harry Potter at Universal Studios in Orlando, Florida, several easily came to mind. But the one that rose to the status of most coveted is: 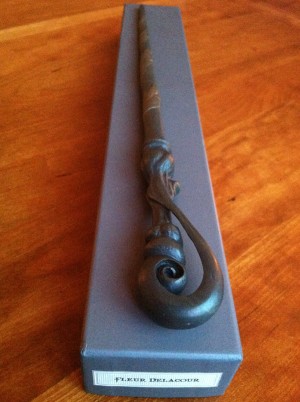 Sure, it’s a bit obvious, but a wand is highly versatile, allowing its user to conjure any number of spells to perform acts of trivial banality (for example washing the dishes, folding the clothes, paying the bills, cleaning out the litter box) or acts of great wonder (like, say, lighting the night with hundreds of fireflies in a tragically firefly-less backyard).

If the owner of a wand were the charitable and kind sort of wizard, she could also use her wand to help others. Neighbor can’t reach that jar of pickles on the high shelf? A friend needs her lawn mowed? Co-worker’s desk could use some tidying? Done. Done. And done. Voila!

If only these posts would come true…

Be sure to check out these other posts to find out which other magical objects are most coveted:

Ellen Gregory – If I Could Have One Magical Item…? That’s EASY

Siri Paulson – If I Could Have One Magical Item

Now it’s your turn, magical readers. What magical object would you choose to have in your possession. The magical pillows are fluffed and the magical tea has been steeped. Sit, sip, and share. I always love to hear from you.

18 thoughts on “Most Coveted Magical Object”

← Wednesday’s Would You Rather Question: Near or Far

Wednesday’s Would You Rather Question: Romances or Finances→