Wednesday’s Would You Rather Question: First Dibs or Last Laugh?→

It’s been a while since I shared a travel-related post, mostly because I’ve been busy slinging words into the manuscript (I’m painfully close to The End), and partly because I’ve not had time or money to get outta Dodge as of late. I’ll resume those posts when I’m able to, but for now I’m gonna shake things up a little. Instead of going international on y’all, I thought I’d keep it local and share some of the things that make my town the quirky, odd place it is by having random “Keepin’ It Weird” posts. Living in a town that kicks off its yearly celebration with a Slug Queen contest (think elaborate costumes, song and dance routines, as well as “bribes” to the judges followed by a grand parade through downtown), I’m thinking I just might have some material to work with here.

I’ll post a photo or two of something odd, weird, whimsical, or funky in my town and then ask you, imaginative readers, to come up with some captions. I may or may not give a brief story to go with the photos, depending on the need for an explanation.

What do you get for participating? The knowledge that you’re forming more and more creative synaptic connections in your brain, the adoration of your fellow Kasbah readers, and the esteemed glory of coming up with the perfect caption. Also, someday you might be asked to send me a photographic example of “Keepin’ It Weird” in your own town for me to post in the Kasbah.

So, without further ado, here is this week’s photo: 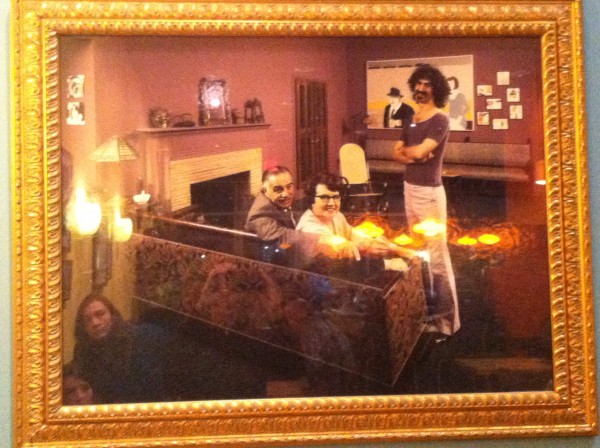 So what say you, creative readers? What caption(s) can you think of for this framed photo that hangs in one of my favorite casual eateries in town?

(Please excuse the poor photo quality – it was rather difficult to get one without the glare of the overhead lights whilst awkwardly leaning over other patrons eating their dinners. Also, see if you can find the 12 y.o. – she inadvertently photobombed my photo with her reflection.)

I hope you’ll give it a whirl and play along. Pull up a pillow, have some tea, and share a caption. As always, I love to hear from you.

Wednesday’s Would You Rather Question: First Dibs or Last Laugh?→