Wednesday’s Would You Rather… Question: A Life of Change or Consistency→ 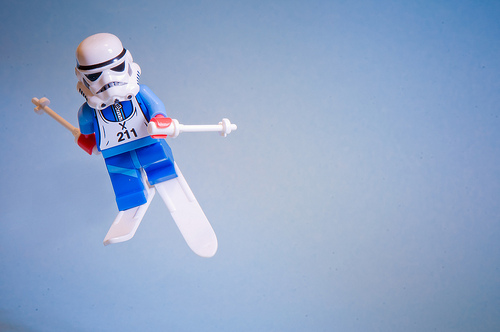 As I mentioned in my recent letter to a certain classy British actor, I went on my first downhill ski adventure this weekend. I have been on several cross-country ski outings, but I had not given myself the chance to learn how to ski down the side of a mountain. When I heard that the 12 year-old’s cross-country team needed chaperones for a day-long ski trip, I seized the opportunity to see if I had what it takes to become a skier.

We arrived at the ski resort with just enough time to get our gear from the kind people behind the rental counters. I had never worn downhill ski boots and was amazed at how difficult it was to walk in them. The 12 y.o. and I clomped around the rental room with the grace of a pair of newborn Storm Troopers as we tried to determine if we had the right fit. We stared in awe at the other people who could walk from one side of the room to the other with relative ease, not once stopping to tell their companions “this is going to make getting to the bathroom a bit awkward.” Those other people, the ones who called themselves “skiers”, were talking and laughing and swapping stories with words like “powder” and “drop offs” and “hot toddy” in them as though they had full mobility in their lower extremities. 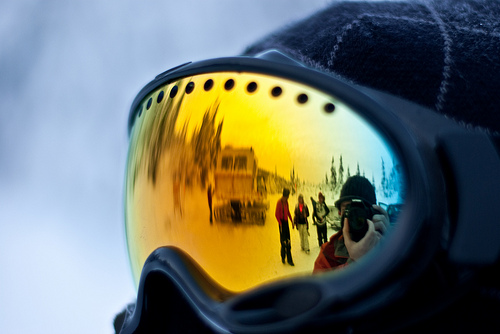 We’re in the club. photo credit: pheochromocytoma via photopin cc

When it was time to wobble outside for our lesson, the 12 y.o. stepped outside, quickly threw an arm over her face and yelled, “My eyes!” She had, of course, forgot to bring her sunglasses and couldn’t see a thing. We clomped back inside the rental room and asked our friends at the counter if we could also rent some ski goggles. The older man who had helped us acquire our boots considered my question for a moment, then darted his eyes to the right and then to the left. Satisfied he was safe, he pulled out a shoe box from beneath the counter. Before he removed the lid he said, “The owner would prefer people to head upstairs to the store to buy some goggles.” He paused, sizing us both up and down to see if we were worthy. Then he took the lid off the box, handed a pair of goggles to the 12 y.o., and said in a low, conspiratorial tone, “You can borrow these. But you didn’t get them from me.” We gave him a knowing nod and trudged outside, both of us feeling like we were just initiated into The Ski Club, which I believe is kind of like Fight Club, except instead of exchanging punches, members are given secret goggles with amber-colored lenses.

We joined our motley group of fellow beginning skiers: a pair of six year-olds who delighted in falling down every chance they got (which was often), a young high school boy who considered the instructors’ lessons “mere suggestions”, and a displeased-looking trio from India who appeared to be brought there by their host on “a fun cultural outing”.

Then, for the first HOUR we were instructed to take microscopic side steps up the side of the bunny hill and then, MAKING YOUR SKIS INTO THE SHAPE OF A PIE WEDGE – I SAID A PIE WEDGE, NOT A WEDGIE, PEOPLE – gently ski down the bunny hill. Repeat 80,000 times or until you are exhausted and fall over in a heap in the snow. Whichever comes first. 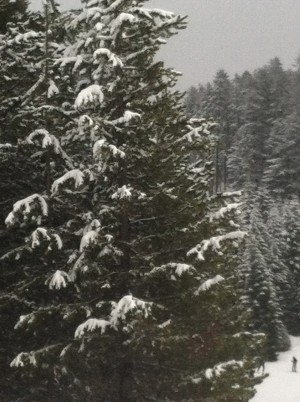 By the time this portion of the lesson was over, the people from India had bailed, the six year-olds disappeared into a snow bank somewhere, and we were left with the “I make my own rules” high schooler. Our instructor, Gene, told us we had finally graduated to “The Magic Carpet”. My ankles were starting to throb inside my Storm Trooper boots, but I wasn’t about to wimp out on a chance to get on something as mythical sounding as *The Magic Carpet*.

We swished and wedgied our way to the sacred spot at the base of the real bunny hill (apparently we had been practicing on the baby mole hill). Gene revealed to us The Magic Carpet, which was not a carpet at all, but a moving walkway in the snow, just like the ones at the airport. It was indeed magical in that it transported you to the half-way point of the bunny hill, allowing you to save your energy for practicing your PIE WEDGE ski stance on the way down. I stared at it in awe. And then the snarky voice in my head reared up and was all like, “FOR THE LOVE OF SNOWMEN AND PEPPERMINT SCHNAPPS WHY DID I HAVE TO PRACTICE SIDESTEPPING UP THE BABY HILL 800,000 TIMES WHEN THERE WAS A MAGIC CARPET THAT COULD DO IT FOR ME??? WHY, GENE??? WHY???” 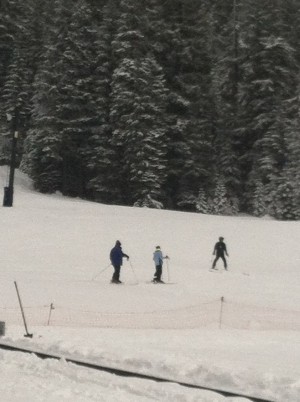 The mythical Magic Carpet is in the foreground

I successfully shushed the snarky voice in my head, not wanting to jeopardize my chances for a ride on The Magic Carpet. I got in line behind some obnoxiously skillful four year-olds who had apparently mastered the art of skiing so quickly they’d spent most of their morning lesson riding The Magic Carpet and smoothly swooshing down the bunny hill. I ignored their little smug looks and stepped onto The Magic Carpet for the short, yet blissful and gentle ride to the top.

After a few runs down the bunny hill, my ankles were registering their revolt by sending pulsating stabs of pain with each step I took. Unfortunately, my delicate, twiggy ankles could not be more securely fastened in the Storm Trooper boots and as such, they were suffering. I was certain that I had shed several layers of skin inside the boots and any further swishing and pie wedging down the bunny hill at -2.3MPH was only going to make it worse. I had been ignoring it because I wanted to finish the lesson with a ride on the ski lift and, at the very least, a run down the bunny hill from the tippy top. Sadly, not even a ride on The Magic Carpet could convince my ankles to take one more step. I told Gene I had to sit out the last half hour of the lesson because my ankles were rubbing in my boots and were now painfully sore.

Thinking I was your typical newbie wimp, Gene told me I was doing great and to stick it out just a little longer. It was clear he wasn’t going to let me give up so easily, so I had to take it up another notch. If I was a writer worthy of the title, I was going to need to do better than “sore ankles” as a lame description. That’s why I told Gene, thanks, but no thanks because my ankles felt like they were being bludgeoned by cheese graters dipped in acid inside my boots of death. Gene gave me a concerned look from behind the amber lenses of his ski goggles, which I’m sure meant he felt sorry for me and my poor ankles. He said something about there being a first aid area in the lodge and then resumed the lesson the 12 y.o. and Defiant Boy. 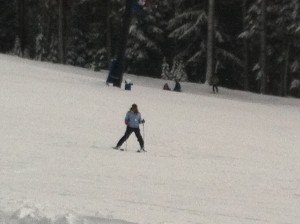 The 12 y.o. and her stellar skiing

The 12 y.o. finished her lesson with a successful ride on the ski lift and a run down the bunny hill. I finished with two slightly bludgeoned ankles and a smidge of my pride still intact. The 12 y.o. swished and swooshed gracefully to the door of the lodge while I hobbled and limped my way back, only barely avoiding the temptation to walk the last 100 yards barefoot in the snow instead of keeping my ankles in the boots of death for one second longer. As soon as I made it inside to a bench, the Storm Trooper boots came off. I think I yelled hallelujah or maybe something inappropriate for all the stares I received in the rental room, but I didn’t care. My ankles were FREE.

If I hadn’t been so wounded, we would have spent the afternoon practicing our pie wedges and impressing everyone with our newly learned skills. As it turned out, the 12 y.o. had had enough of skiing for the day and after a leisurely lunch in which we regaled our friends with our tales of conquering moles and bunnies, we packed up and headed home. It wasn’t quite the ski outing I had in mind for us, but we did learn a lot and had some fun.

Would we go skiing again? We both agreed we definitely would. I, of course, will pack seven pairs of socks, twenty-four band aids, two neck pillows (one for each ankle), and the ethically and sustainably harvested fur of one Yeti to shove in my Storm Trooper boots to protect my delicate, toothpick-sized ankles. I may also give snowboarding a whirl to see if it’s any easier to master and to give another instructor the chance to hear my brilliant descriptions of pain and suffering.

How about you, adventurous readers? Any tales of conquering the slopes, bunny-sized or not? What adventures have you taken that didn’t turn out as planned, but left you willing to give it another go? Any advice for those with delicate ankles who would like to ski or snowboard for longer than a couple of hours? The tea has been steeped, my ankles are under wraps, and the pillows are fluffed. Come share your ideas, suggestions, and thoughts. I always love to hear from you.

Wednesday’s Would You Rather… Question: A Life of Change or Consistency→