← Letters from Benedict: On Flash Mobs, Copenhagen, & the Perception of Truth

Wednesday’s Would You Rather… Question: Choose Your Own Adventure→

Letters are among the most significant memorial a person can leave behind them.
~Johann Wolfgang von Goethe

If you’ve been around the kasbah for any length of time, you not only have my sympathy, undying gratitude, and a sense of loyalty rivaled only by Downton Abbey’s Mr. Carson (is there nothing he won’t do for Lady Mary or Lord Grantham?), but you probably also possess a keen awareness of my affinity for letter writing. Any kind of letter can send my quills a-quivering: endearing sentiments scribbled on a post-it, postcards from far off lands, a thoughtfully worded email, and of course, the best of them all: the hand written letter you receive in the mail.

Letter writing is the only device for combining solitude with good company. ~Lord Byron

When I think of the time and effort it takes for someone to put pen to paper or fingers to keyboard to compose just the right combinations of words while thinking only of that particular person, I’ll confess I get a bit giddy. To me, notes and letters are like sharing little pieces of ourselves, even if it’s just a few lines scrawled on a torn scrap of paper and tucked in an envelope. 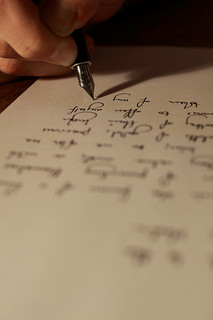 Or don’t you like to write letters. I do because it’s such a swell way to keep from working and yet feel you’ve done something.  ~Ernest Hemingway

That’s why when I first read about The World Needs More Letters movement a few months ago, it was so heartening to read about someone doing good in the world through something as simple as writing letters to strangers. I was also impressed that the founder, Hannah Brencher, wasn’t asking for anything in return. Just a giving of compassionate, unconditional love in the form of a supportive, caring letter. Done freely and without strings attached. To people she’d never met.

There must be millions of people all over the world who never get any love letters… I could be their leader.  ~Charlie Brown

But then I got busy with my own life, the site slipped into the shuffle of things, and I forgot about it . Then, this past week it popped up again in my inbox when it was featured on the fabulously uplifting and inspirational website, The Daily Good. I first heard about this great website through reading Kait Nolan‘s blog and loved the idea of getting something in my inbox every day that showed me the good in the world and the inspiring stories of others doing amazing things. I signed up and now look forward to reading more about the good to temper all of the chaos and tragedy going on around us.

What a lot we lost when we stopped writing letters. You can’t reread a phone call.  ~Liz Carpenter

The organization The World Needs More Love Letters is all about sending out handwritten letters to anyone in need of one. Through their website, you can request a letter be sent to someone you know for any reason. Their team of letter writers then distributes the requests and letter writing magic happens. Within a short period of time, the recipient receives an anonymously handwritten letter in the mail with words of inspiration or encouragement that also lets them know they are cared about and they matter.

I’ve decided to pursue joining their team and lending a hand in writing some letters as a way not only to give a little something back, but also as a way to honor and celebrate the one year anniversary of *officially* claiming my identity as a writer. If anyone else has a love of letters and has an interest in writing words of encouragement to strangers, I’d love to have you join me and would be the first in line to cheer you on.

For now, I’ll leave with a song to inspire you to write more letters:

And how about you, fine readers? Are any of you a fellow letter writing devotee? Did any of you have a pen pal when you were younger? Also, does anyone else use letter writing as a excuse to buy more office supplies like I do? Come have some tea and share your thoughts. I always love to hear from you.

← Letters from Benedict: On Flash Mobs, Copenhagen, & the Perception of Truth

Wednesday’s Would You Rather… Question: Choose Your Own Adventure→