Despite what the Mayans and the Apocalypsters predicted, 2013 has arrived and with it, the first Wednesday of the year. That also means it’s time for the very first Would You Rather question.

Last week I asked y’all which would be the better setting in which to get some career-defining work done: a remote cabin in the woods or an apartment in a major city. I’m not sure if it’s because many of you who left a comment are writers, but the votes came in heavily weighted on the side of the cabin. For many of you, the lack of distractions was the biggest reason for choosing the country retreat. One person was undecided and one person simply stated she would go wherever there wasn’t internet access so she wouldn’t be tempted to play Song Pop. Oh, the evils of the internet…

Since my college days of yore, I’ve always found it easier to work when surrounded by the background hum of others talking and espresso machines frothing, not to mention the wafting scent of delectable scones fresh from the oven. I have fond memories of going to my favorite cafe, planting myself at my usual table near the window, getting that first cup o’ joe, and then settling into my studies. Before I knew it, hours had gone by and it was time to go home and ingest something other than caffeine and sugar. I loved how my clothes would smell like freshly brewed coffee long after I’d left. Oh, and I also got some studying done, which was pretty sweet since that’s why I went there in the first place. 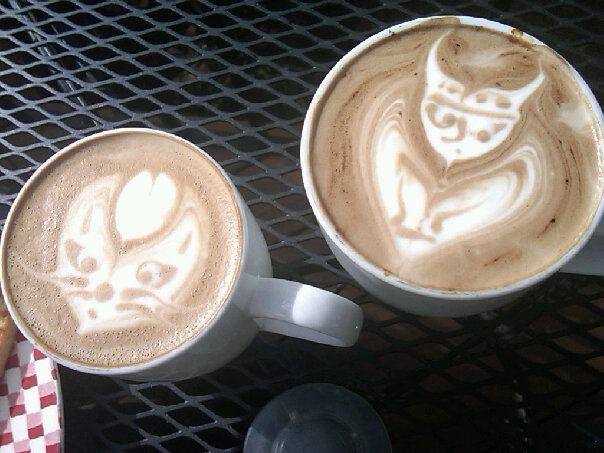 Amazing foam action at one of my favorite local cafes.

All of that is to say that even though a city would have temptations galore to distract me at every turn, I think I’m a city mouse at heart. I love a good long break at a country or mountain retreat and nothing clears the head like a vigorous hike or a swim in a lake. But, I think I would ultimately find the peace and quiet a little too… quiet. Give me a noisy cafe to write in any day. Give me the beat and the pulse of a city with great food and abundant resources like libraries, book stores, and interesting people watching wherever you go.

Now that that’s settled, let’s move on to this week’s Would You Rather question:

be incredibly physically attractive but exude an extremely bothersome odor

be hideously unattractive but have a scent that is irresistible?

(*The fine print: You cannot undergo to plastic surgery of any kind nor can you can you marinate yourself in perfume or cologne.)

What will you choose, lovely readers? Phenomenal attractiveness with a repellant odor or atrocious looks but a scent that lures ’em in? Go ahead and ‘fess up – what happens in the kasbah, stays in the kasbah. Kinda like Vegas, minus the all the lights and the shows. Also, I should note there aren’t going to be any buffets, mostly because I don’t like them. (Yeah, I said it. I’m anti-buffet.) But other than that they’re practically identical. So, please share your thoughts, if for no other reason than it will stop my rambling.

10 thoughts on “Wednesday’s Would You Rather… question: Looks vs. Scent”