Wednesday’s “Would You Rather…?” question: Super Powers vs. The Wand→

I was recently tagged by the delightful author, Liv Rancourt in The Next Big Thing, an interview in which writers are to answer ten questions about their current work in progress (WIP). (Be sure to pop over to Liv’s to read her answers to The Next Big Thing here.)

The Next Big Thing has been hopping around the blogosphere for a while and I’ll admit I was hesitant to jump in and share the details on my WIP. It wasn’t until I sat down to answer the questions that I discovered why I had been so reluctant. Beyond feeling shy and nervous about sharing my story idea, I’m not entirely sure if this is going to be the first story I’ll publish in some way. The idea for it has been dancing around the fringes of my mind for a while and when it finally came together in a somewhat coherent form, I knew I had to write it down regardless of its publishing potential. It may not be The One, but it’s what I’ve been working on in the depths of writing cave for the past two months. 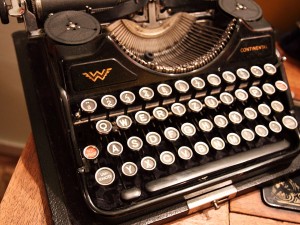 With that out of the way, let’s get on with the interview:

What is your working title of your book?

I’ve been struggling with this for some time. For now, the not-so-great working title is ‘Let Us Go’. It is from ‘A Love Song by J. Alfred Prufrock’ by T.S. Eliot. I think my subconscious is trying to tell me something because I can’t seem to come up with anything else.

Where did the idea come from for the book?

For the past couple of years, I have been fascinated by what it must be like to live the life of someone who rose quickly to fame – the endless press junkets, the interviews, the things you lose or have to give up, and the things we non-famous people take for granted as we go about our daily lives. For nearly as long, I’ve also been itching to write a story from two different first person narrators. I also like to write and receive letters. (Shocking, I know. But I’m a bit of a foolish romantic when it comes them.) About three months ago, these three ideas mingled in my funny little brain, then quickly became BFF’s and are now pushing me to write the story.

What genre does your book fall under?

Young Adult Contemporary Fiction that dips its toes in the waters of Suspense.

Which actors would you choose to play your characters in a movie rendition?

This is a tough one. The two characters who tell the story are nineteen year-old Oliver and seventeen year-old Athena. I can picture them in my head when I write, but I haven’t associated them with specific celebrities.

Alex Pettyfer could pass for Oliver, though he doesn’t exactly capture him. The closest I could come up with for Athena is Emma Stone. You can check out my Pinterest Story Board (here) to see their photos.

What is the one-sentence synopsis of your book?

Two lonely teenagers – Athena, who survives her life by hiding from her dangerous past, and Oliver, who struggles with what fame has taken from him – find friendship in what began as an uncommon fan letter sent in a book. But when Oliver’s fame accidentally shines a light on Athena’s dark past and threatens her safety, they both must decide if it’s a relationship worth risking everything for.

Yes, I know it’s two sentences. It’s not great, but it’s getting there. Like every other aspect of this novel this, too, is a work in progress.

Will your book be self-published or represented by an agency?

Not sure. I have to see what I think of the novel when I’m done. As I mentioned above, this novel might not be The One I choose to put out into the world regardless of publishing options.

How long did it take you to write the first draft of your manuscript?

What other books would you compare this story to within your genre?

Since I’m being pressed to give an answer, I will bend the rules a bit and compare it to a movie and a book: The Shop Around the Corner (the movie You’ve Got Mail is based on) meets Will Grayson, Will Grayson (by John Green and David Levithan). (For fans of the book: While music will feature in my novel, I regret to say there will not be a musical as awesome as “Hold Me Closer, Tiny Cooper” in it.)

Who or what inspired you to write this book?

See above answer to question #2. Also, I plead the 5th. That’s allowed, right?

What else about your book might pique the reader’s interest?

There will be humorous, snarky banter, and those awkward, yet funny moments when two friends realize they’ve fallen for each other. Also, there will be some sad parts and some scary parts and some angry parts. Lots of feelings going on in there. Kind of like a lot of other novels you may have read or seen. Really, it’s like every other book out there except this one will have my name on it and maybe the order in which the feelings appear will be different. Actually, that’s probably not true because the feelings will appear in a logical order because who wants to read a story in which the characters totally hate each other at the end? Not me, that’s who. Let’s just say my characters have SOME feelings at the end but I don’t want to spoil it for you so I’m not going to say what they are. IF I publish this story, and IF after all of this you decide to read it, then you’ll find out how it ends. Does that answer the question?

Since many of my writer friends have already been tagged, I am going to break the rules once again and tag just one writer: my friend and critique partner, Ben Grieger. Be sure to stop by his insightful blog and say hello.

21 thoughts on “From the Depths of the Writing Cave”

Wednesday’s “Would You Rather…?” question: Super Powers vs. The Wand→