← Wednesday’s “Would You Rather…?” question: Rudy vs. Clarence vs. Buddy

Congratulations on accomplishing your word count during NaNoWriMo last month! I’d be happy to continue a vigilant watch over the kasbah in order for you to keep up your writing momentum in December. Whatever it takes to assist you in getting that manuscript DONE. Mind you, I am traveling quite a bit these days for The Hobbit premiere and for Star Trek 2, but I will make time to ensure all is well here. In fact, it might serve as a nice, quiet place of respite to regain some sanity and rest.

Your sanity, on the other hand, continues to concern me the longer you stay in the writing cave. Case in point: fingers??? Really? Out of all possible words in the English language, THAT is your second Favorite Word? I learn something new about you every week.

I’ll admit I was intrigued enough by last week’s letter that I searched out Neil Gaiman’s reading of The Graveyard Book, the very one in which you discovered your affinity for the word fingers spoken in a British accent, to hopefully hear what is so interesting about that word. While I could say fingers to myself all day and not hear what the big deal is, I thought I might better understand your penchant for it if I heard it directly from the master author himself:

While I couldn’t hear what was so amazing about fingers, I did enjoy Neil’s reading and the story. And speaking of Mr. Gaiman, starting in January 2013, you can listen to the radio play of Neverwhere that I’m in on the BBC iPlayer. I can’t guarantee that aluminium or fingers will be said, but it should be enjoyable nonetheless.

I’m glad you liked the trailer for Star Trek 2: Into Darkness which came out this week. Maybe ‘liked’ isn’t quite the emotion you intended to convey in the brief letter you sent after viewing it. There were a great number of exclamation points and capital letters in there. To answer your most pressing question, no, the trailer wasn’t put out five months before the movie’s release just to cause you angst or to torment you. It’s supposed to build excitement and anticipation. The angst and torment are just bonuses.

All the same, thanks for saying I ‘owned it and rocked it with skillful bada$$ery’ in the trailer. I don’t think I’ve ever been given such an eloquently worded compliment.

To show my appreciation, I have a surprise for you. No, you can’t see it just yet. It’s still in the works. Please continue to ignore the boarded up area in the corner of the kasbah. All will be revealed in time. Very soon.

I know, I’ve asked you to have patience about a great many things, like waiting for the next series of Sherlock, the U.S. releases of previous work I’ve done, and the releases of movies I’m in that are yet to come. I promise you won’t have to wait as long for this. Yes, it has something to do with the kasbah. No, no, there’s no need to go re-read my letters from November just to look for clues. 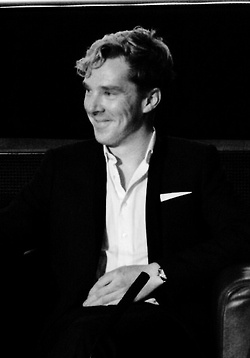 ~ Distraction at its best. I know, not fair, but then again I’m not the one with the hidden writing cave.

Say, doesn’t that novel of yours need some attention? Weren’t you just talking about doing NaNo Lite to get it done by the end of the month? I thought so. Best get back to work on it. Like you always tell me, it won’t write itself.

← Wednesday’s “Would You Rather…?” question: Rudy vs. Clarence vs. Buddy