← Letters from Benedict: On Rockin’ the Kasbah, King-Style

Wednesday’s “Would You Rather…?”: The Kitchen [Chat] Sink Session→

My talented friend and author, Liv Rancourt, is in the Kasbah today filling in for me while I’m relaxing at the beach in North Carolina (post forthcoming). So, today I’ve fluffed the kasbah cushions and dusted off the soap box so she can give her perspective on this election season.

I have no manners. Really. You’ve been gracious enough to invite me to be a guest at the Kasbah, Tami, and here I am talking about politics.

Told ya. No manners.

It’s an emotional time of year, you know? Regardless of who you’re voting for, there’s a preacher out there somewhere who’s convinced you’re going to burn in hell because of it. I know, because he was at my church last night.

A friend sent me an e-vite to an Election Night event she’s hostessing at our favorite neighborhood pub. Because alcohol and strong feelings are always such a great combination. The husband even suggested we have a few people over Tuesday evening to watch the returns. I reminded him of the last time we had a dinner party on election night. The wrong guy won and it was about seven years before we saw our guests again. 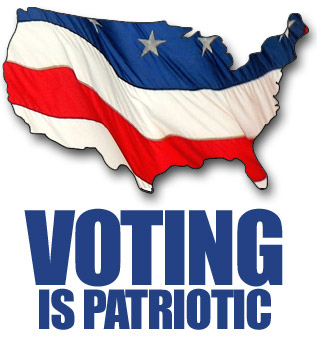 Anyone who has had the opportunity to vote in more than a couple of elections knows the incredible euphoria of having a guy you believe in step into the most powerful position on earth. You’ve probably also gone to bed knowing the world was going to end because the other guy won. And more than likely you’ve seen your Golden Boy fall flat on his ass in ways you never would have imagined.

The new wrinkle this year is the mail-in ballot phenomenon. Here in Washington State, the mail-in option is the only option; no more going to the community center to check out how my elderly neighbors are doing and eat stale cookies to celebrate the one democratic gesture we all share. It makes me sad. Stepping into the voting booth was a little like going to confession, without the Hail Mary’s afterwards. Putting a stamp on an envelope doesn’t have the same sense of ritual.

Apparently, though, there’s a virtue in mailing in your ballot well ahead of the deadline. I’ve been scolded by more than one of my friends – seriously scolded – because I haven’t mailed mine yet. It’s filled out and will go into the mail before Tuesday. It will. I promise. If I sound defensive it’s because I am, a little. I need to remind these friends that my one vote will count the same as their one vote, even though the state tallied theirs last week.

You know what I’m looking forward to more than anything else? Two weeks from now when the dust has started settling and we can all get on with our lives. Love him or…not…we’ll have a President. There’ll be enough Senators and Representatives to fill the houses of Congress. We’ll know which ballot measures will stand and which will go back to the drawing board. Our creaking democracy will turn another page and we can all go back to staring with sick fascination at whatever crazy thing Honey Boo-Boo has done this week.

Thanks for playing hostess, Tami. You make the best tea & crumpets in town.

Thanks for keeping tabs on the kasbah for me today, Liv! And to all my fair readers here in the U.S. as we approach election night, regardless of which party or candidate you affiliate yourself with, remember that we’re all in this together. Get that ballot out, do your part, and vote.

But wait! There’s one more treat from Liv!

She has recently released her short story, The Santa Drag, and sent us an excerpt to whet the appetite. Yes, it is a bit early for Christmas-related themes, but do indulge yourself in Liv’s fabulous writing and then give yourself an early present by downloading her story. You’ll be glad you did.

On a particularly busy Saturday, I was tired and thinking more about a double shot of espresso than I was about the pile of kids who wanted to sit in my lap. The weak winter sun was making its circle over the atrium where the Christmas Village was set up, and my roommate Shauna was buzzing by every so often to giggle at me from the sidelines. She was trying to get all of her Christmas shopping done in one day, which was a good trick for someone with as many fertile brothers and sisters as she had.

“Come sit on Santa’s lap.” Maya, the photographer and kid-wrangler, invited the next kid in line approach my golden throne. Well, it was fake gold, but the kids didn’t know that.

“No,” said a little girl with a stubborn crease between her brows. She was dressed in Seattle’s version of Christmas formal, a stiff, red velvet dress, likely made from organic fabric dyed with beets and rose hips. On her feet were two-toned leather MaryJanes that probably cost sixty-five dollars. At least the green corkscrew ribbons tied around her blond pigtails looked like they belonged on a child. I made myself as approachable as possible, getting down to her level and producing a big smile.

“Come on, Thula,” her mother said, tapping one French manicured nail on her cell phone. “Go sit up there with Santa so we can take your picture.” She sounded as if this was just one more thing to knock off the list.

“It’s okay, sweetie.” Maya put on her encouraging smile. Maya was a tiny thing, barely bigger than most of the kids we saw, with long dark hair, a tiny gold hoop pierced through one nostril, and bugged-out eyes that looked like they’d been molded out of chocolate. She was non-threatening as an adult could possibly be. The kid stared at her and bit down on her bottom lip. At least she wasn’t crying. Yet.

“You want to come tell Santa what to bring you for Christmas?” I kept my voice pitched down somewhere under my sternum. It helped that I had one of those raspy lady voices that earned me a permanent spot in the tenor section whenever I sang in choir.

Sometimes less is more when you’re dealing with preschoolers. We went back and forth for several minutes until  the kid went from biting her bottom lip to letting it pooch out and tremble. Never a good sign. Finally, after a ton of coaxing, she was more-or-less close to me,  squatting down on the other side of one of the big pretend presents that ringed my throne. That was good enough for her mom, and Maya snapped a picture.

When she was done, the little girl glared at me from behind the big, glossy red ribbon that topped the present. “Bring me a baby brother,” she bellowed and took off running..

Mom’s glare was meaner than the kid’s had been. Hey, it’s not like I made any promises.

The kid ran full tilt past the pseudo-Tyrolean houses that made the Village, and out through the crowds of shoppers. She stopped in the middle of an open space and cut loose, her sobs echoing around the smoky glass dome that covered us. We could hear her carrying on until she and her mom got swallowed up by the Ross store at the end of the north hallway. The whole place fell into a bit of a hush when she was gone, as  everyone exhaled in relief. This close to Christmas, none of us needed a crying child to ratchet up the stress level.

A young mother was next in line. She came into the Christmas Village and positioned a slightly damp baby on my lap, moving as if something hurt. The baby was so young that Mom still looked a little pregnant under her loose denim-blue shirt. Or maybe she was already pregnant with number two. I’m not so good with the principles of baby production. Well, I understand the basic concepts, but haven’t had that many opportunities to put them into practice.

The brief quiet was interrupted by a yodeling squeal that I recognized. I stared into the crowd until I caught Maya looking at me funny. I stuck on a smile as close to my normal, jolly-Santa shtick as I could get, and she settled back down behind her camera. The reason for my roommate Shauna’s squeal had me completely rattled. In the two or three beats I’d looked out from behind my wire-rimmed glasses as Mack-the-girl, I’d seen Shauna giving someone a big hug. A really handsome someone. Joe McBride. Joseph Timothy McBride. The actor. The real-life, got a soap opera gig and several commercials and you saw him in Scream 2 actor. The only guy I ever really loved.

Ooh, now she’s got a problem! Will Mack turn all Creepy-Kringle? Will Joe recognize her? What’s a Santa to do?  😉

The Santa Drag is available from Still Moments Publishing, Smashwords, and Amazon.

Liv Rancourt writes paranormal chick-lit and romance, often at the same time. She lives in Seattle with her husband, two teenagers, two cats and one wayward puppy. Liv’s day job is in a hospital where she works as a neonatal nurse practitioner, and where holding the babies is one of the biggest perks. She has also fronted a rock band and studied Gregorian chant. All of these experiences have given her great material to work with, and she’s thrilled and excited to be able to share her stories with you, the reader.

← Letters from Benedict: On Rockin’ the Kasbah, King-Style

Wednesday’s “Would You Rather…?”: The Kitchen [Chat] Sink Session→