Wednesday’s “Would You Rather…?” Question: Dolphins vs Wolves→

Instead of going on a train ride to Ostia Antica (which you can read more about here), an archaeological site that is said to rival that of Pompeii, we decided a better way to end our amazing Italian adventures was to make peace with Rome on our last day.

I didn’t want to leave Italy on a down note and Rome, while being an amazing city full of antiquities, architecture and archaeological wonders, felt a bit harsh in other areas. The subtle “Italian indifference” (as we called it) that we encountered in the other cities felt more like extreme annoyance, intolerance and in some cases, borderline hostile, during our time in Rome. I didn’t want to skip out of the city only to return at dinnertime, a time which had become stressful for both of us due to the intolerant and annoyed servers at the restaurants. Mappy was all set to go to Ostia Antica on her own, but I had to make peace with Rome another way. She decided to forge ahea and left, but then returned moments later saying she didn’t want to end her time in Italy doing something on her own. So, as a compromise, we decided an afternoon walking in the lush gardens and greenery of the Villa Borghese seemed to be the ideal antidote. 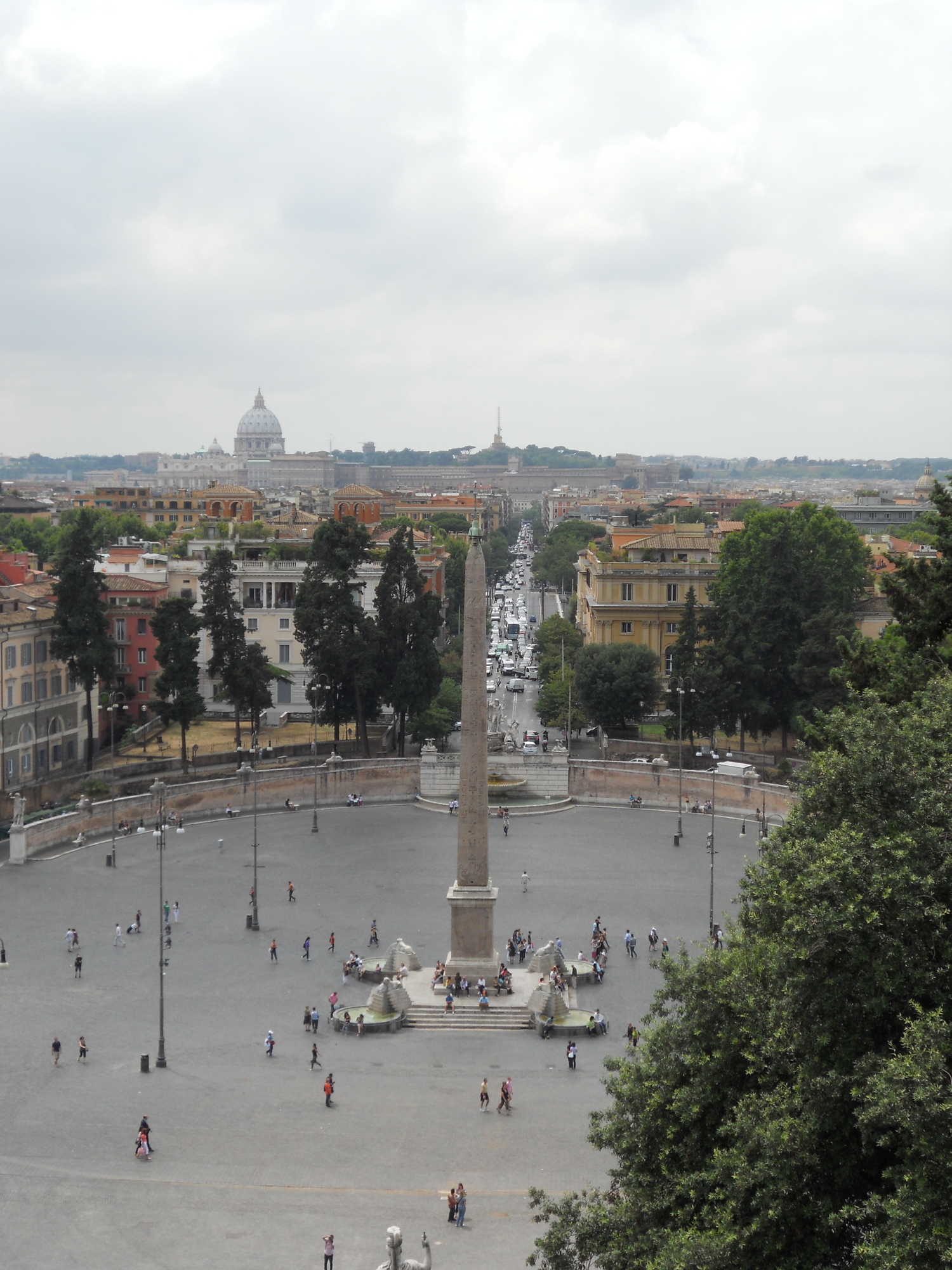 Piazza del Popolo as seen from the Borghese Gardens

The Villa Borghese Gardens is Rome’s second largest public park and is located just north of the Spanish Steps and the Piazza del Popolo, the People’s Square. Cardinal Scipione Borghese, nephew of Pope Paul V, is responsible for turning his former vineyard into the most extensive gardens built in Rome since Antiquity, a process he began in 1605. Initially, the grounds were divided into three sections: a wooded area, a more artistic area with statues and sculptures, and a third section that was to be more wild and “natural”.

Over the next few centuries, the gardens were altered to be more like a formal English garden. Towards the end of 18th century, an artificial lake was built in the middle of the park. In the lake is an island on which sits a small temple dedicated to Aesculapius, the God of healing. 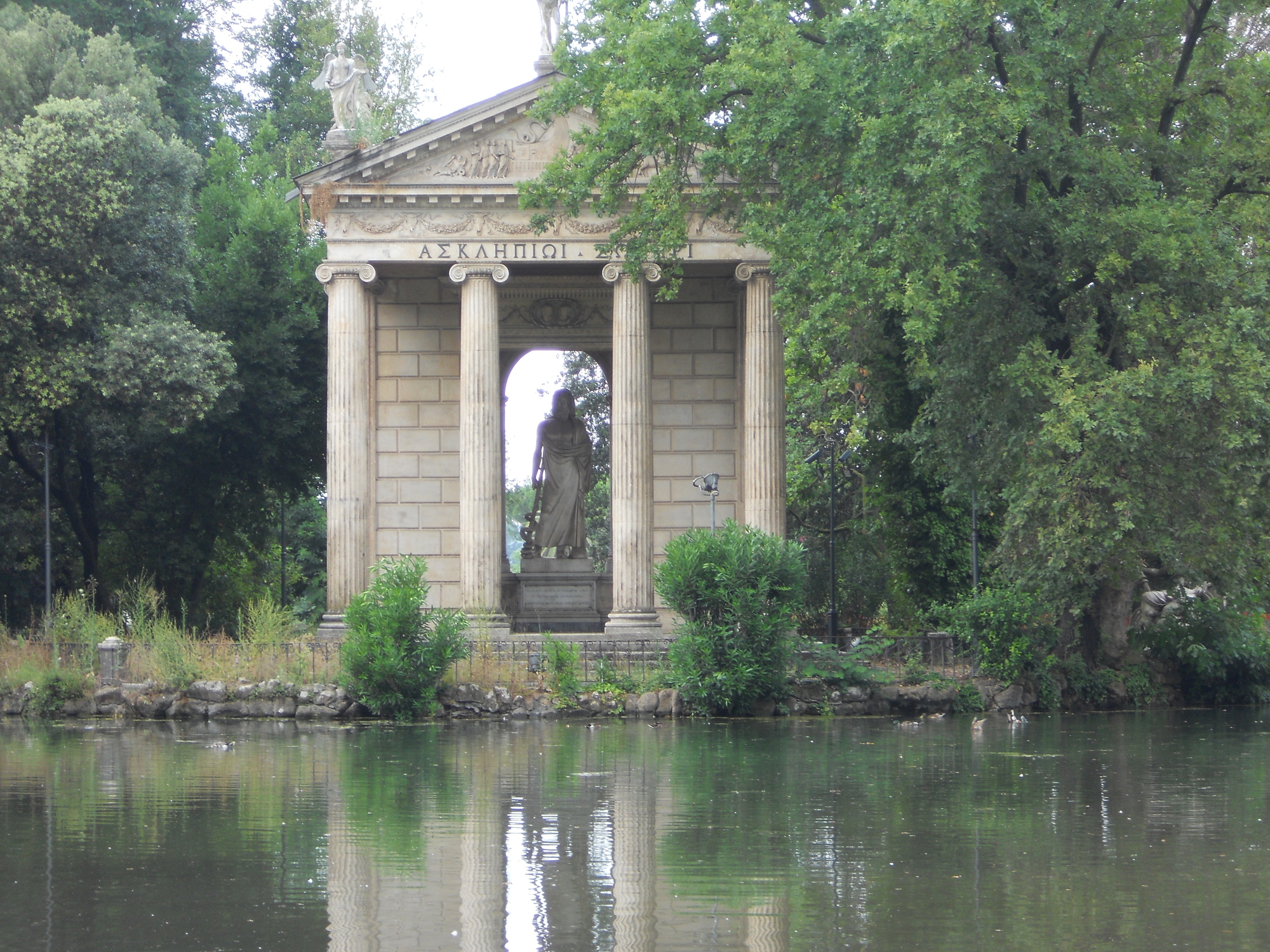 The Borghese estate also contains several villas that currently house museums. According to the site, A View on Cities, the Borghese park is “Dubbed the ‘park of museums’ [and] is also home to several museums. The most famous is the Museo e Galleria Borghese, [the Borghese Museum and Gallery], housed in the Villa Borghese, the building after which the park is named. It has a collection of sculptures with some important works by Canova and Bernini. The Galleria Borghese also houses a collection of paintings from several masters including Titian, Rubens and Raphael.

The Galleria Nazionale d’Arte Moderna, [the Gallery of Modern Art], is located at the grounds of the 1911 World Exposition. The museum has a collection of 19th and 20th century paintings. It contains mostly works from Italian artists. Not far from the Galleria Nazionale d’Arte Moderna is the Museo Nazionale Etrusco, [National Etruscan Museum]. It displays a collection of pre-Roman objects, mostly Etruscan, excavated around Rome. The museum is housed in the Villa Giulia, a villa built in 1553 as the summer residence of pope Julius II. The park also contains an amphitheater (the Piazza di Siena), an 18th century arch (the arco di Settimio Severo) and a botanical garden.”

We stopped in the bakery across the street to get a lunch and then treated ourselves to a cab ride to the outer edge of the Borghese gardens. We walked and reminisced about our favorite moments on the trip. We sat and ate our lunch while listening to the wind in the trees. We took photos and pretended we sat around city parks in the middle of a Tuesday afternoon all the time. 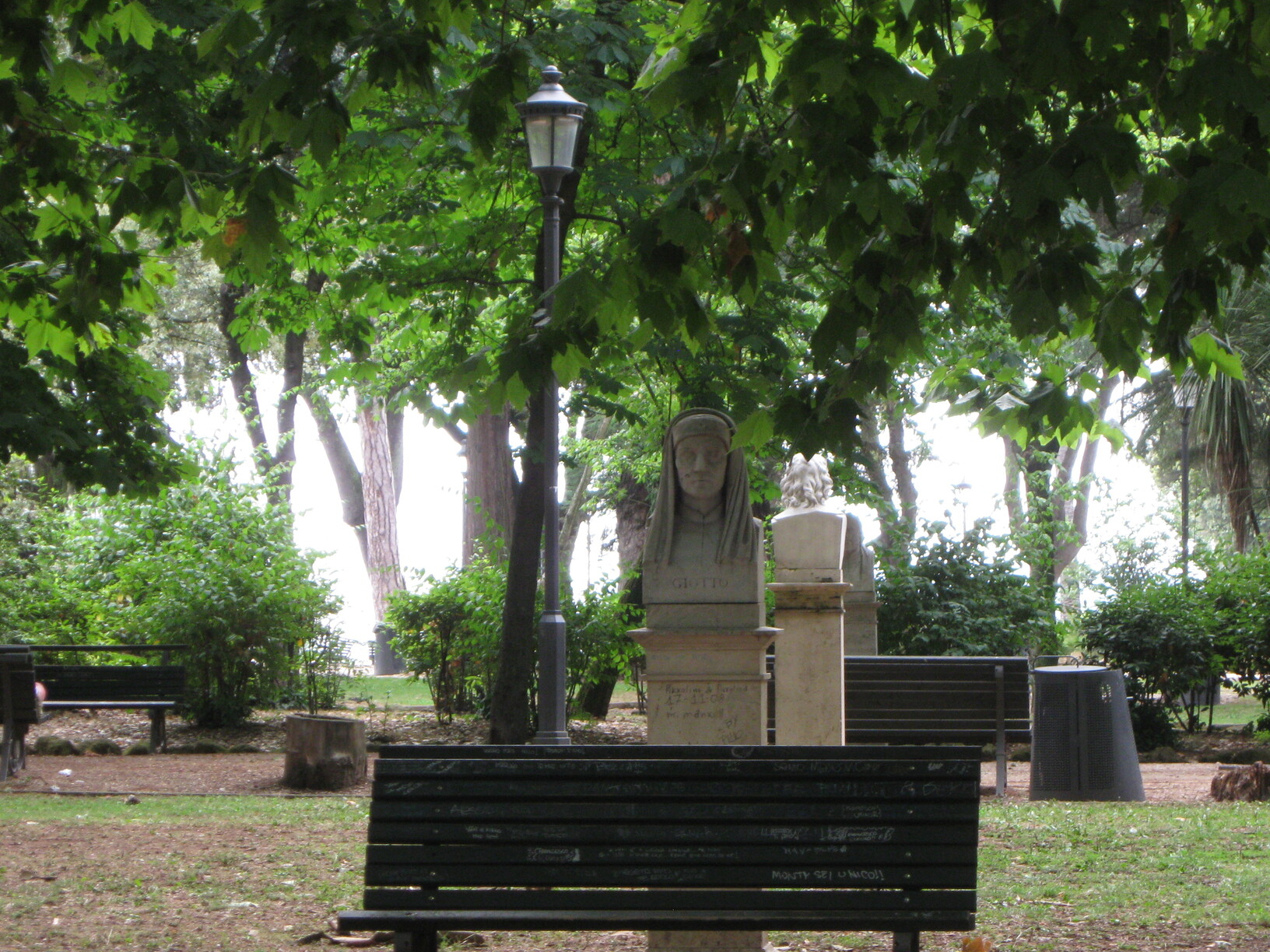 While we were interested in what was inside the museums, we were kind of burned out on them, too. We had been to eight different, massively large art museums since arriving in Italy, and that didn’t count the art we enjoyed at the eight different basilicas we had also visited. A missed opportunity to see some of Italy’s finest art? Maybe. But we were pretty content with how we chose to spend our day. 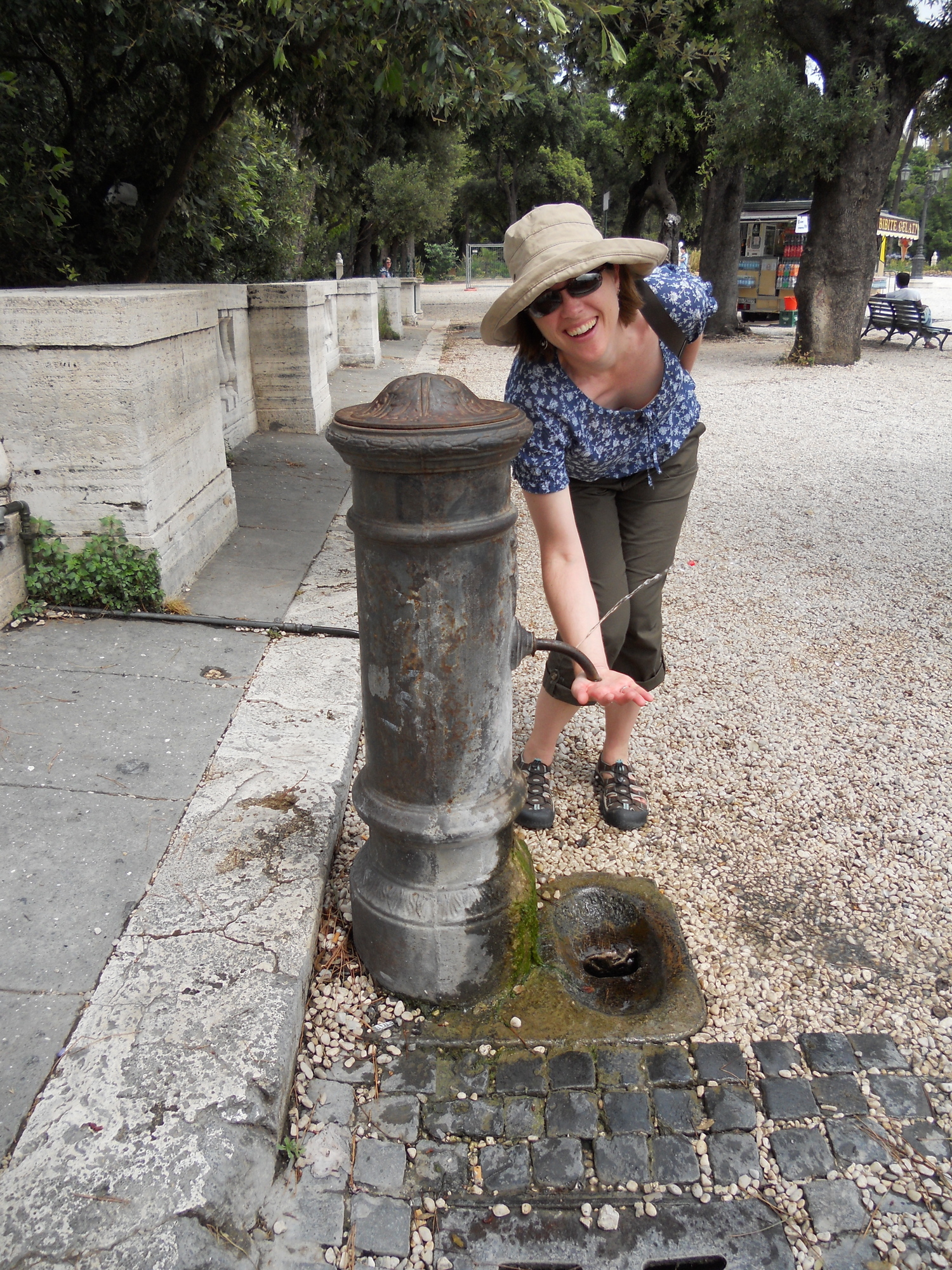 A typical Roman drinking fountain. The water is continually running from an aqueduct to the numerous fountains all over the city. When you place your hand under the spout (and block the flow of water going that direction), the water squirts out a hole on top of the spout, allowing you to drink from it.

Later, we rented a two person bike and pedaled it as fast as it would go (fast being a bit of a stretch here), laughing the whole time at how ridiculous we looked. But I didn’t care. I was enjoying Rome and Rome was letting me do it without pretension or annoyance or looks askance. I wasn’t worrying about trying to navigate the customs and social mores of the city. I was making peace with a city that at first, didn’t feel so welcoming. I was saying good-bye, not only to Rome, but to Italy herself, on my own terms. 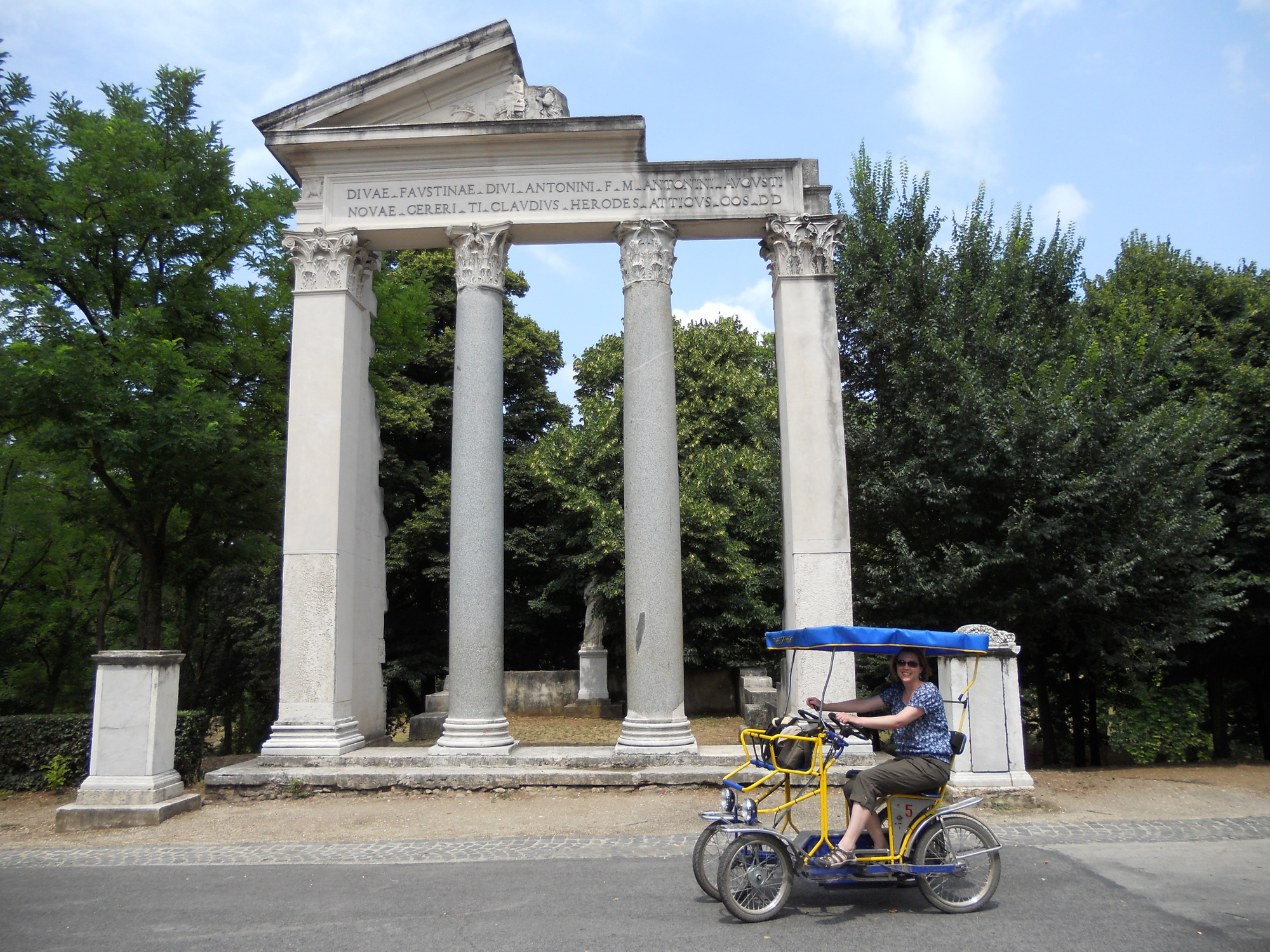 That evening, feeling both refreshed from an afternoon in the park and sad that our travels were about to come to an end, we finally found a restaurant that had a server who smiled at us and joked around with us. While the food wasn’t as good as some of the other places we had been to, the service was so much kinder that it really didn’t matter. A server smiled at us and that totally made our evening.

The next day we left, feeling somber and wishing we could stay longer in our favorite places, though our adventures didn’t stop as soon as we left Italy. On our flight home, a passenger on board our flight from Munich to Toronto experienced heart problems and required emergency medical assistance. The pilot made the decision to land in what seemed like the ends of the Earth, but was really a remote area of Iceland. Because of regulations stating that the airplane needed to be re-inspected before we could take off, we were forced to sit on the runway for 4 hours. (It wasn’t like there was an enormous queue of planes needing inspection. As far as I could tell looking out my little window, there appeared to only be about 3 or 4 other planes. Go figure.)

Unfortunately, we arrived late, missed our connecting flight, and had to spend the night in Toronto courtesy of Canada Air which, by the way, was a delightful airline in a scenario like this. Canada Air not only handled everything efficiently and quickly, but also paid in full for our hotel room, dinner that evening and breakfast the next morning. (I shouldn’t have been amazed at this since this is what an airline should always do, but I was.)

With relatively few mishaps or misfortunes, the trip went as smooth as it possibly could. We made some new friends along the way, ate some seriously delicious food, sampled a gelateria’s worth of gelato flavors, drank some awesome wine, and gazed upon some of the world’s most amazingly beautiful art work and archaeological wonders.

Italy was all that I hoped it would be and more.

I can’t wait to go back someday.

Many thanks to all of you fine readers for joining me on my Italian adventures. I am planning one more post about Italy featuring my best tips for making travel there easier and more enjoyable. If you have any lingering questions or want to know more about any of the cities I’ve visited, please let me know in the comments. As always, I’d love to hear from you.

Wednesday’s “Would You Rather…?” Question: Dolphins vs Wolves→