Dear Benedict: On Making Sacrifices & Taking One for the Team→

As you may remember, last week I participated in the What’s Your Chocolate blog hop (you can read more about that here) and I promised one lucky commenter a trifecta of chocolatey goodness delivered to his or her doorstep from yours truly. I was so impressed by all of the chocolate fiends out there who stopped by the kasbah, took a few moments to read my chocolate coated words and left a comment. Thank you!

But before I get to the randomly drawn winner (it’s called suspense, people), I want to take a moment to give a super big shout out to some fellow writers who have recently released their books. I’d be lying if I said listing them here on the walls of the kasbah was a purely altruistic gesture on my part. This is also a way for me to round them all up in one place so I can add them to my To Be Read pile and not miss a single one.

There have been so many recent releases in my circle of writer friends that I’ll be grouping them by genre (or as best I can group ’em), and spreading the shout outs over the next few weeks. This week’s featured genre: Young Adult.

While I haven’t had the opportunity to read any of these yet, I follow these writer’s blogs and am so, so, so looking forward to reading their books. Here they are, in no particular order, five new or recent YA releases with direct links to Amazon, the author’s blog or website, and a brief synopsis:

Witches inhabit our world, organized in covens and hiding behind a shroud of secrecy–the Veil.

Skye’s London coven sends her to Seattle’s Greenwood High to find the Singularity, an unusually gifted witch who may break the Veil and trigger a dangerous new era of witch-hunting. Things get complicated when Skye meets a charming new classmate, Drake. Skye’s job becomes even trickier when she clashes with Jane, an intimidating rival witch.

Drake falls for the mysterious Skye, but odd accidents, potion mix-ups, and the occasional brush with death kind of get in the way of romance. Once he discovers Skye is a witch, he goes to war for her, even though his only weapons are a nice set of abs and a sharp sense of humor.

Fighting off wicked Jane and the other dark forces hell-bent on seizing the Singularity’s immense power, Skye and Drake will risk everything to save the covens.

Going on a date has never been harder.

Nothing can explain to Aydan Fulbert how she survived the savage attack in the woods. Why her left eye, instead of being blinded by the injuries she’d sustained, had simply turned a shocking shade of silver. And nothing can explain the fact that she can hear the Stranger speaking in her mind – or that she can answer him back without using her mouth.

Nothing can explain it – unless he’s telling the truth.

Nothing can explain the things the Stranger knows about her – things that she, until just a few hours ago, hadn’t known herself: that she’d healed faster from her injuries than was humanly possible. That the cruel family she’d been raised by isn’t biologically hers. That her stepfather is now hell-bent on bringing her to his own form of justice for a crime she didn’t commit.

Nothing can explain it – unless she’s telling the truth.

Nothing can explain why she so easily agreed to go with the Stranger. Why she didn’t find the notion of another world ludicrous and impossible. Why she didn’t cut and run the minute he explained where he wanted to take her.

Nothing can explain it – unless she believes he’s telling the truth.

Aydan knows she’s being intentionally naive. She knows her decision to follow the stranger is at best, reckless. At worst, deadly.

…unless he’s telling the truth.

Crimson in the Very Wrong Fairy Tale by Liz Jasper

Crimson has a strategy for surviving high school. Blend in. Don’t cause trouble.

It works pretty well—until her sixteenth birthday when her long-lost father shows up and all hell breaks loose.
Literally.
It turns out that he is a demon king, which makes Crimson…a princess. Of Darkness.

Her castle is a sulfur-reeking cavern underground. Her Princess Training has nothing to do with tea and crumpets. Prince Charming isn’t rushing in to save her. And, to top it off, she still has to go to high school.

She can’t tell anyone the truth, not even her best friends. To survive, she will have to risk everything and use a cunning she didn’t know she possessed. And even then there’s no guarantee she or anyone she cares about will be alive tomorrow—for neither Hell nor high school comes with a manual.

(not technically considered YA by the author (it’s Literary Fiction/Coming-of-Age), but we meet the main character when she is 14 and since I make the rules in the kasbah, I am including it here)

Fourteen year old Willa Burkett has been waiting her whole life to leave Hoosick Falls, a nowhere place that fails to hold even a single good memory.

But, when a series of vengeful incidents stir Willa’s mother Stella to impulsively pack-up and go, it is only to find themselves stranded in yet another ugly, near extinct town, only now, with a broken down car and no ready way out. Unable to move on until an alternate plan shows itself, they accept a job working for Omega Pearl Bodie, proprietress of the Moonglow motel, a long forgotten, steadily decaying relic, where mostly nothing happens, except now, when everything does.

It is here in this place of desperate loneliness and restless boredom that Willa will have her world rocked to the core in ways she doesn’t immediately comprehend understand.

The craziness of the life she’s left behind all but eclipsed by the dark turn of the here and now, as Willa attempts to keep one step ahead of the ever-twisting whims of a mother prone to keeping secrets and telling lies, a murderous arsonist returned to the scene of his earlier crimes to dole out revenge one fiery victim at a time, and Jesse Truman. An unknowable boy with indigo eyes that Omega Pearl has hired as handyman at the Moonglow, who Willa longs to save, if only she understood what it is he needs saving from.

When Vee is picked to be a player in NERVE, an anonymous game of dares broadcast live online, she discovers that the game knows her. They tempt her with prizes taken from her ThisIsMe page and team her up with the perfect boy, sizzling-hot Ian.

At first it’s exhilarating–Vee and Ian’s fans cheer them on to riskier dares with higher stakes. But the game takes a twisted turn when they’re directed to a secret location with five other players for the Grand Prize round. Suddenly they’re playing all or nothing, with their lives on the line. Just how far will Vee go before she loses NERVE?

I’m so excited for all of these authors! If their stories sound like your cup o’ tea, click the links and get yourself one or two or five. Then fluff a pillow here in the kasbah, put your feet up and settle in with your shiny new book. I know they’d appreciate it.

And now, without further ado, the randomly selected winner of the chocolates is… 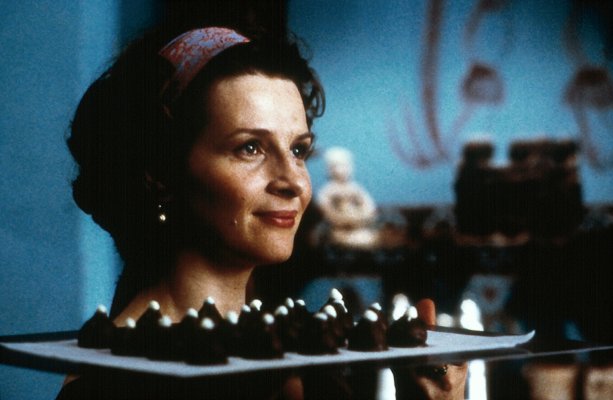 “Can I interest you in some nipples of Venus?” ~ image credit: moviespicdb.com

No, silly. Juliette Binoche is not the winner.

The luck of the draw goes to…..

Yay! Looks like being the first to comment worked in your favor with the chocolate gods and goddesses, Sara.

(No, I didn’t rig it that way just because she commented first. This was a random drawing, readers. RANDOM. Just a name drawn out of my cowboy hat. Pinky swear.)

Confectionary congratulations! I hope you enjoy them as much as I do.

And now it’s your turn, smart readers: Do you know of any recently released or soon-to-be released YA books that I’ve missed? (And deepest apologies if I missed listing your book. Let me know if I did and I’ll add it to the post ASAP!) Have you recently read any good new releases (of any genre) that you want to give a shout out to? Sit, relax, and have some tea while you share them in the comments below.

20 thoughts on “Embracing Goodness With Chocolate and Books”

Dear Benedict: On Making Sacrifices & Taking One for the Team→