And Though She Be But Little→ 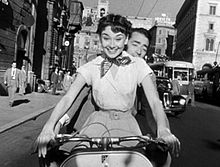 Joe: …why don’t you take a little time for yourself?
Ann: Maybe another hour.
Joe: Live dangerously. Take the whole day.
Ann: I could do some of the things I’ve always wanted to.
Joe: Like what?
Ann: Oh, you can’t imagine. I-I’d do just whatever I liked all day long.
Joe: You mean things like having your hair cut, eating gelati…
Ann: Yes, and I’d sit at a sidewalk cafe and look in shop windows. Walk in the rain, have fun and maybe some excitement…

After a brief overnight stop in Orvieto (which you can read about here), Mappy and I boarded our last train to the final stop on our Italian adventure: Rome.

As the train approached the city, we came to the realization that Rome was going to be quite different from the other cities we had visited. We shared the six person couchette, train car, with two middle-aged women and an elderly man and his wife. When the three women left the train car to walk around a bit, the man quickly wrote something on a small piece of paper and handed it to Mappy. She unfolded it to find his name, phone number, and the best times to call when his wife was not home because she was “Sicilian and easily made jealous.” The man went on to lament how difficult it was to be married to such a woman, though he was looking over his shoulder every few moments for his wife’s return and nervously told Mappy several times to put the piece of paper away so his wife wouldn’t see.

Such was our introduction to Rome. 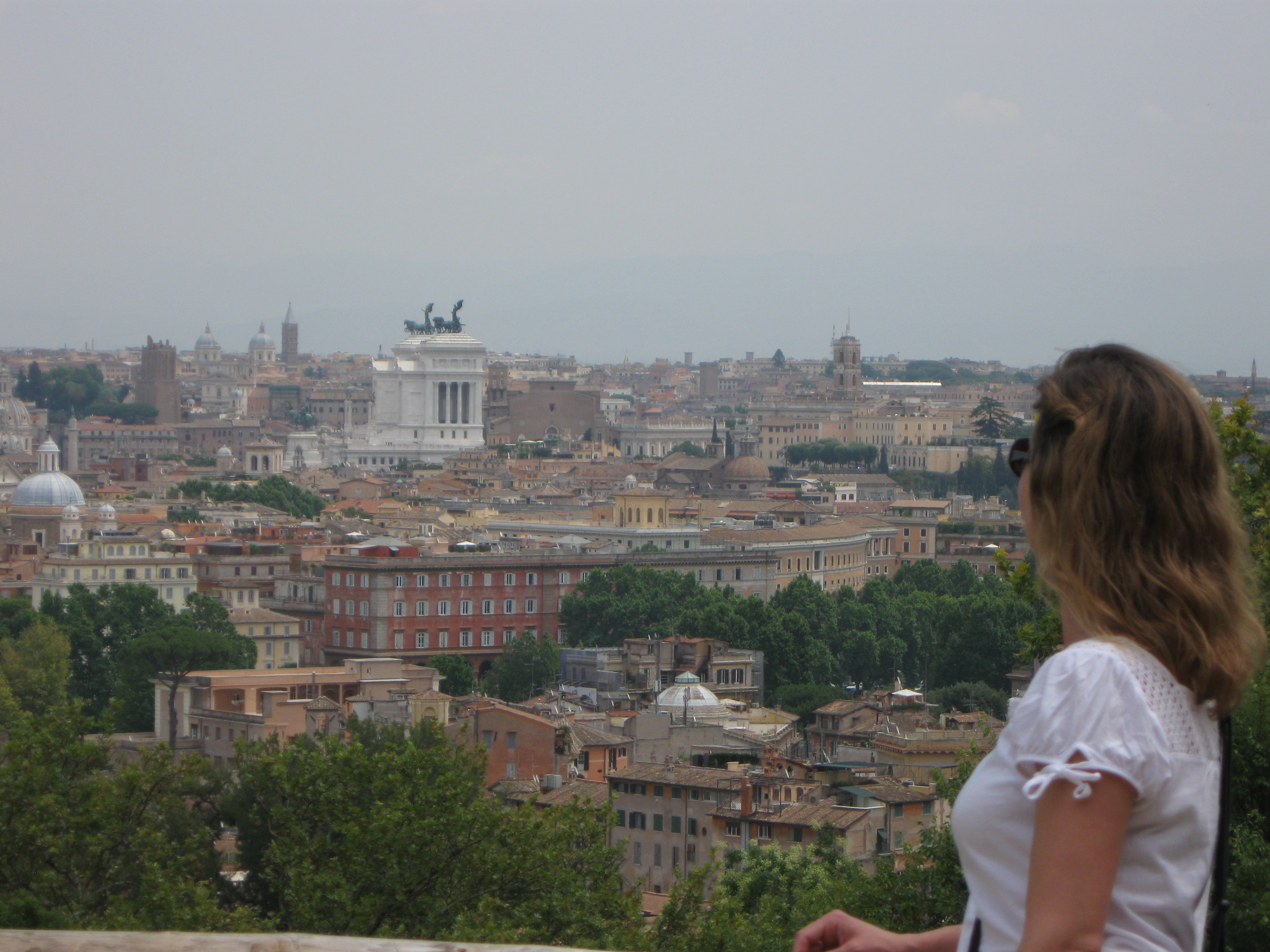 Rome is filled with an astounding number of ancient sites, layers upon layers of history woven through its tangled web of cobblestone streets, more Vespas whipping past you than you’ve ever seen in one place, and arguably the most fashionably dressed men and women outside of Paris or London. It is a huge city requiring more than a day or two to see its grandeur. It also demands your patience, a sense of adventure, a flexible schedule and, if you’re not Italian or don’t speak the language well, a swift checking of your ego at the door because it will get mightily bruised by an extreme indifference towards foreign tourists.

I recommend arriving in Rome with a plan for sightseeing to use as a general guide because there is so much to see and some places are closed on Sundays or Mondays. I also recommend going online well in advance of your trip and buying entrance tickets to the Vatican museums, Sistine Chapel, and St. Peter’s Basilica (which I will get to in a later post). Furthermore, I would also consult a guide-book like Rick Steves’ or his website for up to date information on the best sightseeing passes so you can avoid the very long lines at sites like the Colosseum. (We bought the Archeologia Card for €22 which gave us entry into all the major archaeological sites as well as all four branches of the National Museum.)

It’s also a good idea to have a decent map (and perhaps a friend like Mappy who is good at reading it), an understanding of the where the neighborhoods are in relation to each other, and a willingness to get a little lost from time to time because it’s gonna happen anyway, so you might as well enjoy it. 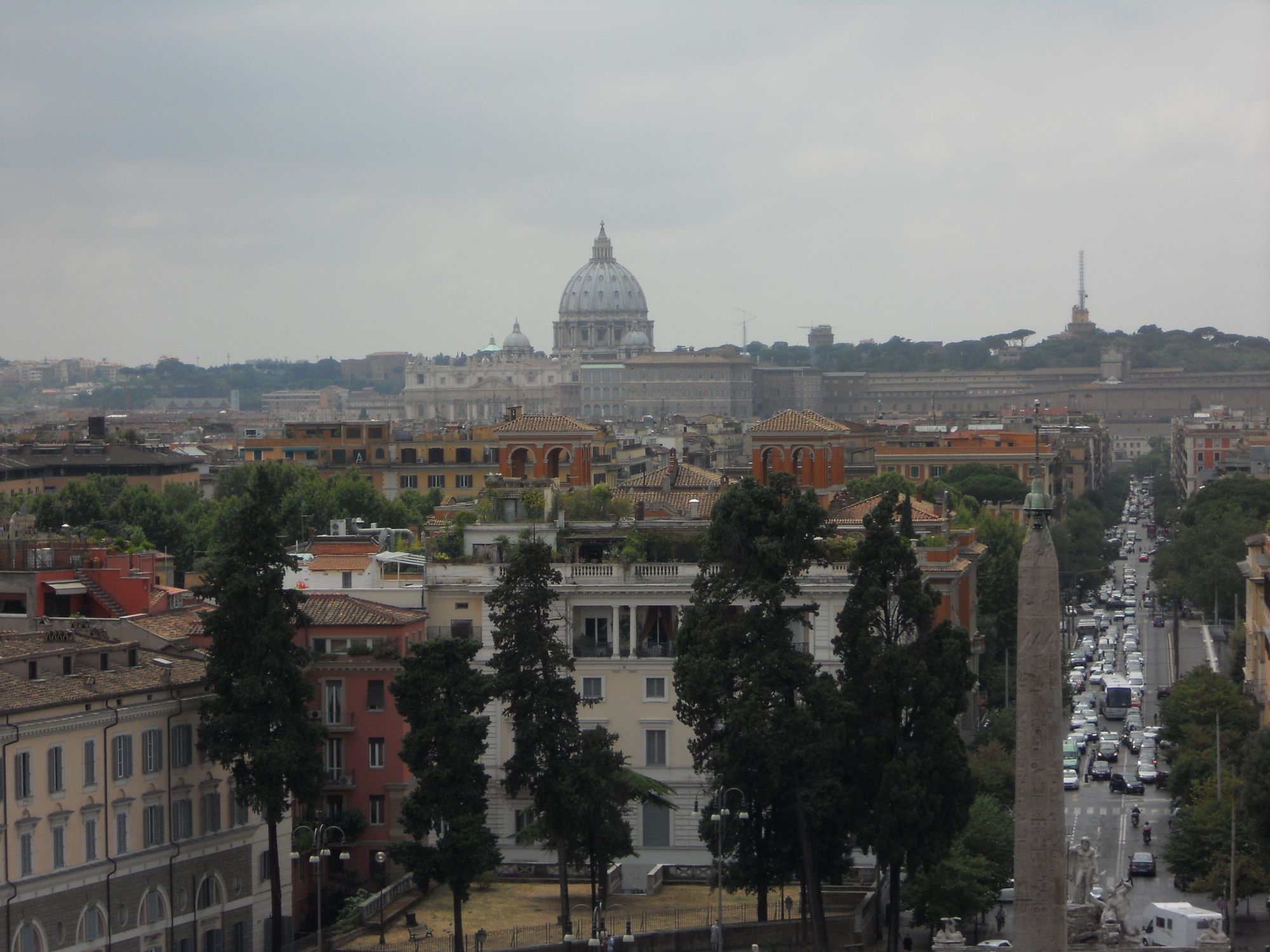 After a quick cab ride from the train station, we arrived at Roma Trasteverina B & B run by Giorgio, a friendly, English-speaking, twenty-something guy who renovated the apartment-style B & B to the lovely place it is today. It is located in the Trastevere (pronounced trahs-TAY-veh-ay) neighborhood, across the Tiber River from the hustle and bustle of the more touristy parts of Rome, though in easy walking distance to many sights. I chose this neighborhood as our home base for precisely those reasons. The Trastevere neighborhood has long been a working class area, though it is slowly succumbing to gentrification with its increased popularity. It is a lively area with lots of shops, restaurants, and places to sit and people watch. Each night we were there (including Sunday) the streets were busy with families, couples, and groups of friends playing in the parks, seated at the outdoor restaurants, and taking an evening passeggiata.

On our first evening, Mappy and I went to a restaurant recommended by our host and while the food was quite good, we were a bit baffled as to the lack of personable service. We spoke our best Italian, followed all customs and social mores as best we knew them, and yet our server acted as though we were annoying her on purpose. We chalked it up to some of the Italian indifference that we’d experienced in other places and hoped things would improve at other restaurants over the next several days.

The next day we were up bright and early because my friend, Anne, was flying in from Germany to spend the day with us. (You can read here for more stories about Anne and my time in Germany.) I was so excited to see her and to get to spend some time exploring Rome with her. She arrived with a small carry-on suitcase filled with my favorite German chocolates to share with my family and for Mappy to share with hers. The Romans may have been indifferent to us but at least we now had lots of chocolate to soothe our wounded egos. 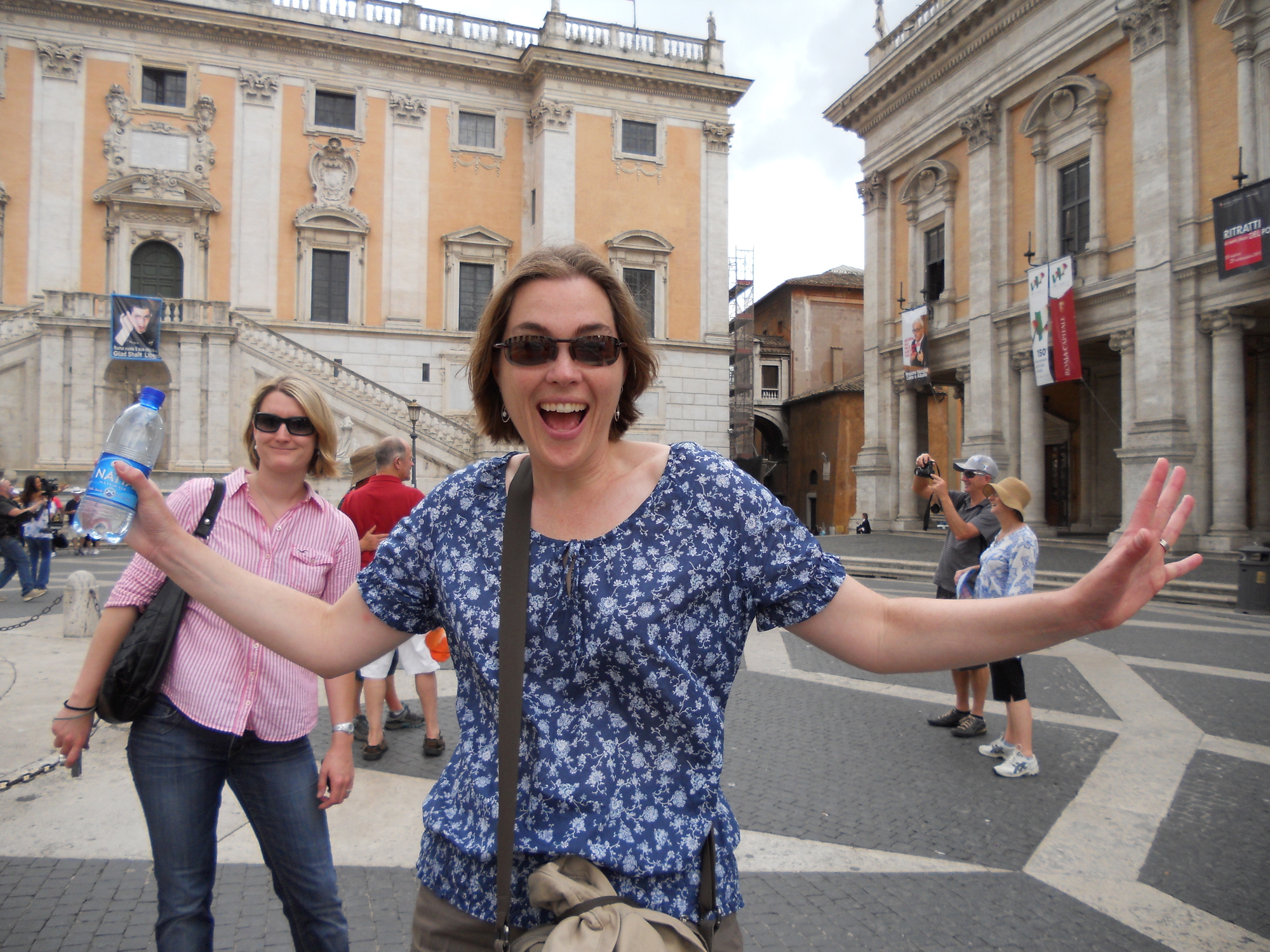 Yay for friends from Germany who bring suitcases of chocolate!

For our first day in Rome, I planned for us to tour the Colosseum and the Roman Forum. Instead of spending a small fortune for a guided tour through these sites, I downloaded Rick Steves’ free audio guides on to our ipods. The three of us wandered through these ancient sites listening to the informative information and sometimes cheesy anecdotes. Doing so allowed us to not only save some money, but it also enabled us to walk at our own pace and take photos as often as we wanted.

The Colosseo, Colosseum, is a 2000 year-old structure that sits smack dab in the middle of what’s refered to as Ancient Rome. Built around 80 A.D. at the height of the Roman Empire, much of what is seen today is the outer shell as well as concrete supports, arches, and columns that make up the massive four-story structure. It took us about an hour to wander through all of the areas open to the public. There are tours you can pay for to be taken to the lowest levels of the Colosseum if you wanted to see more of it than from the middle and upper walkways. 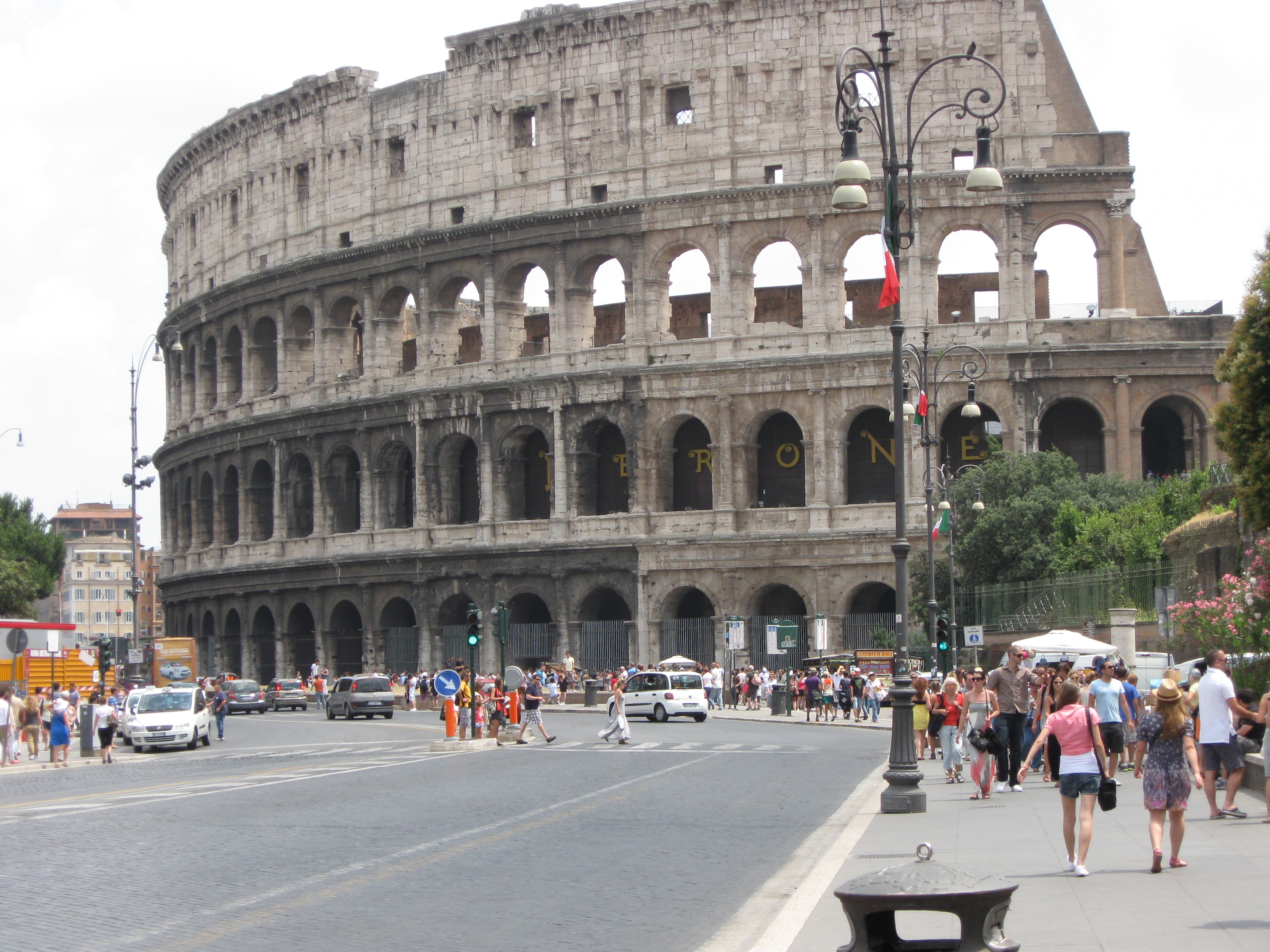 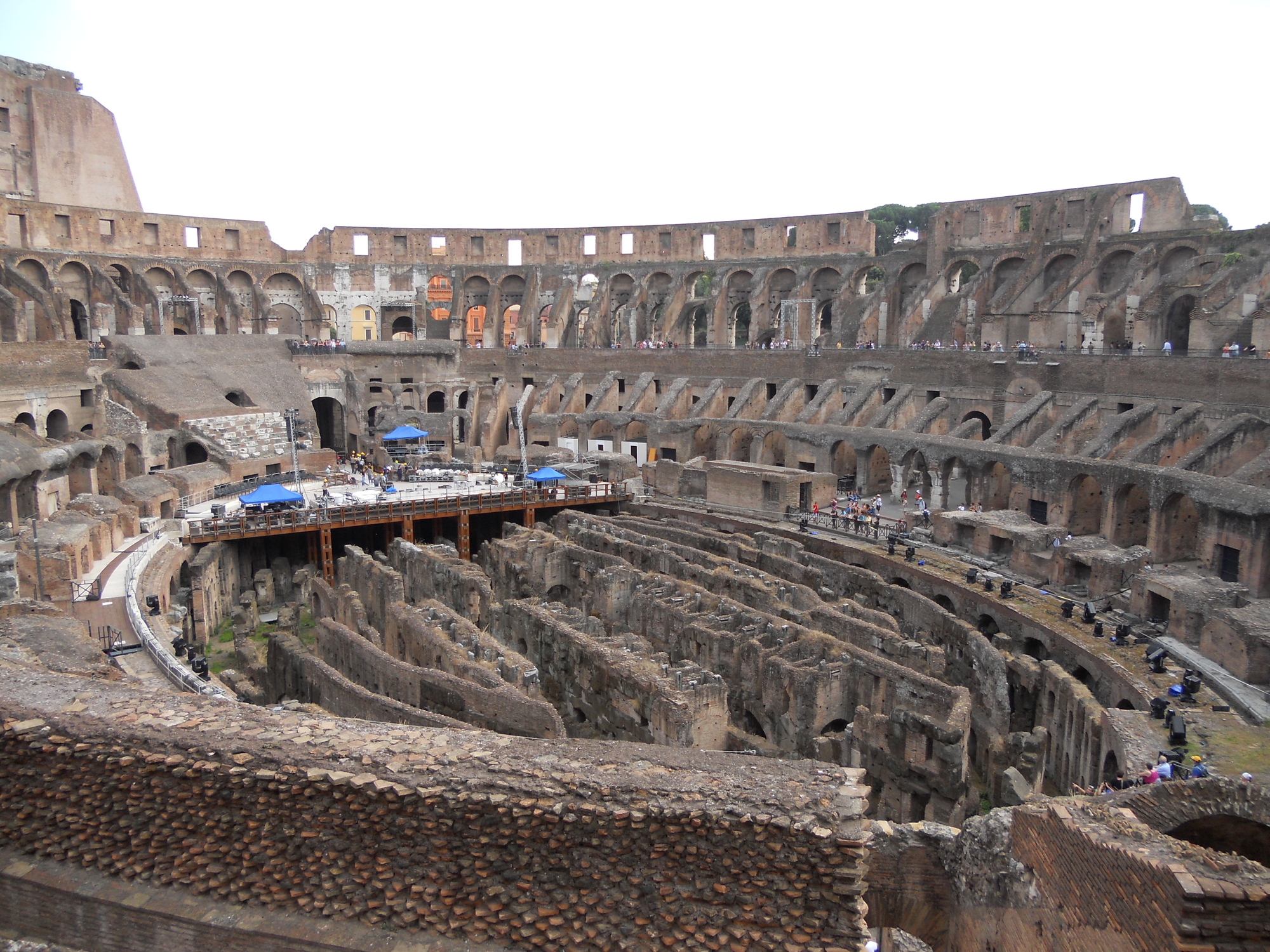 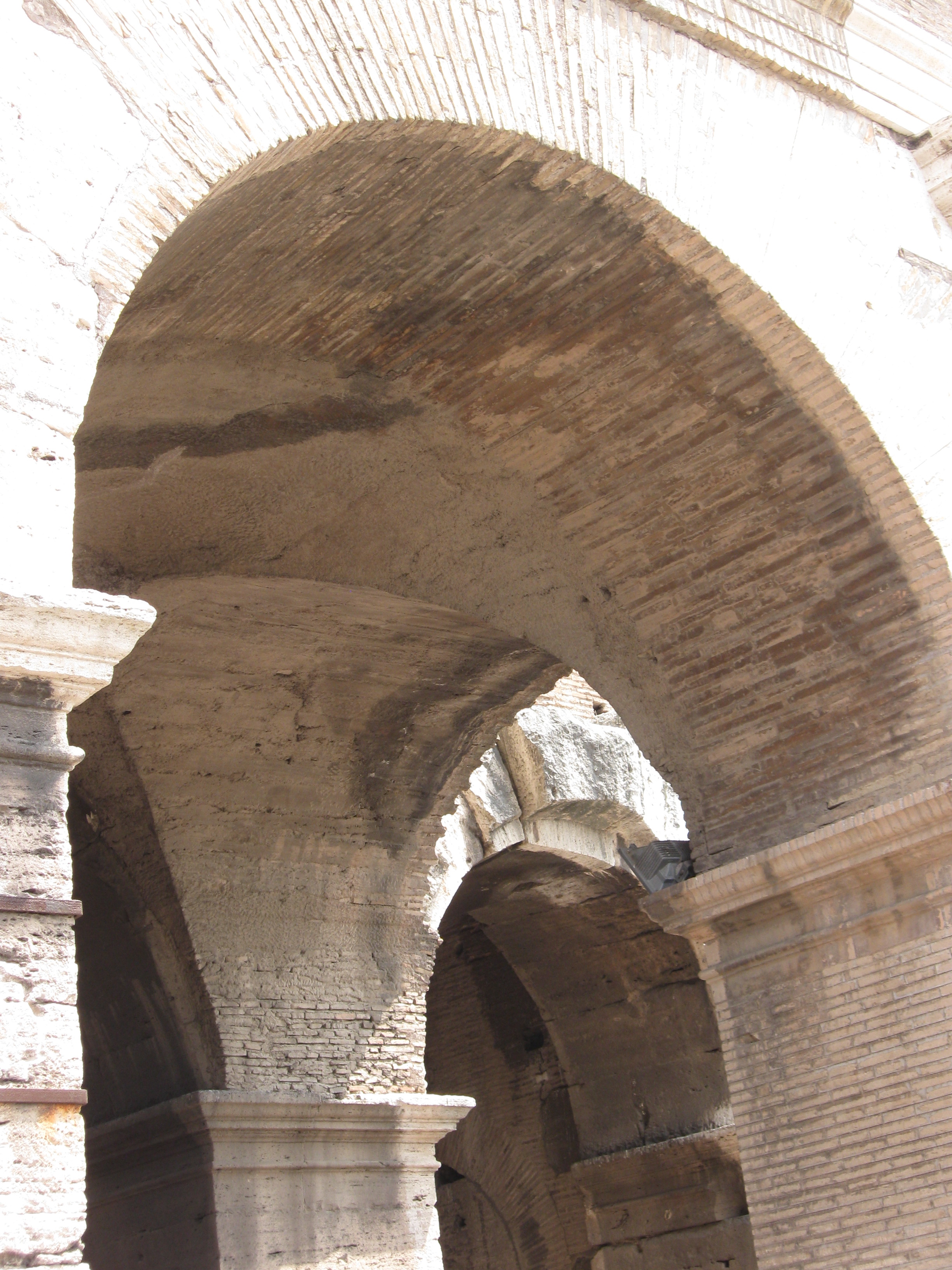 The Colosseum is both a feat of Roman engineering and a sight to behold. Soaring archways and the meticulously placed stone work seem to not only defy the passage of time, but also the harsh brutality of the events that took place there.

We next went to the Foro Romano, the Roman Forum, the political, religious, and civic center of Rome. This is where Rome’s most important temples were located and where processions, parades, demonstrations, speeches or elections took place. 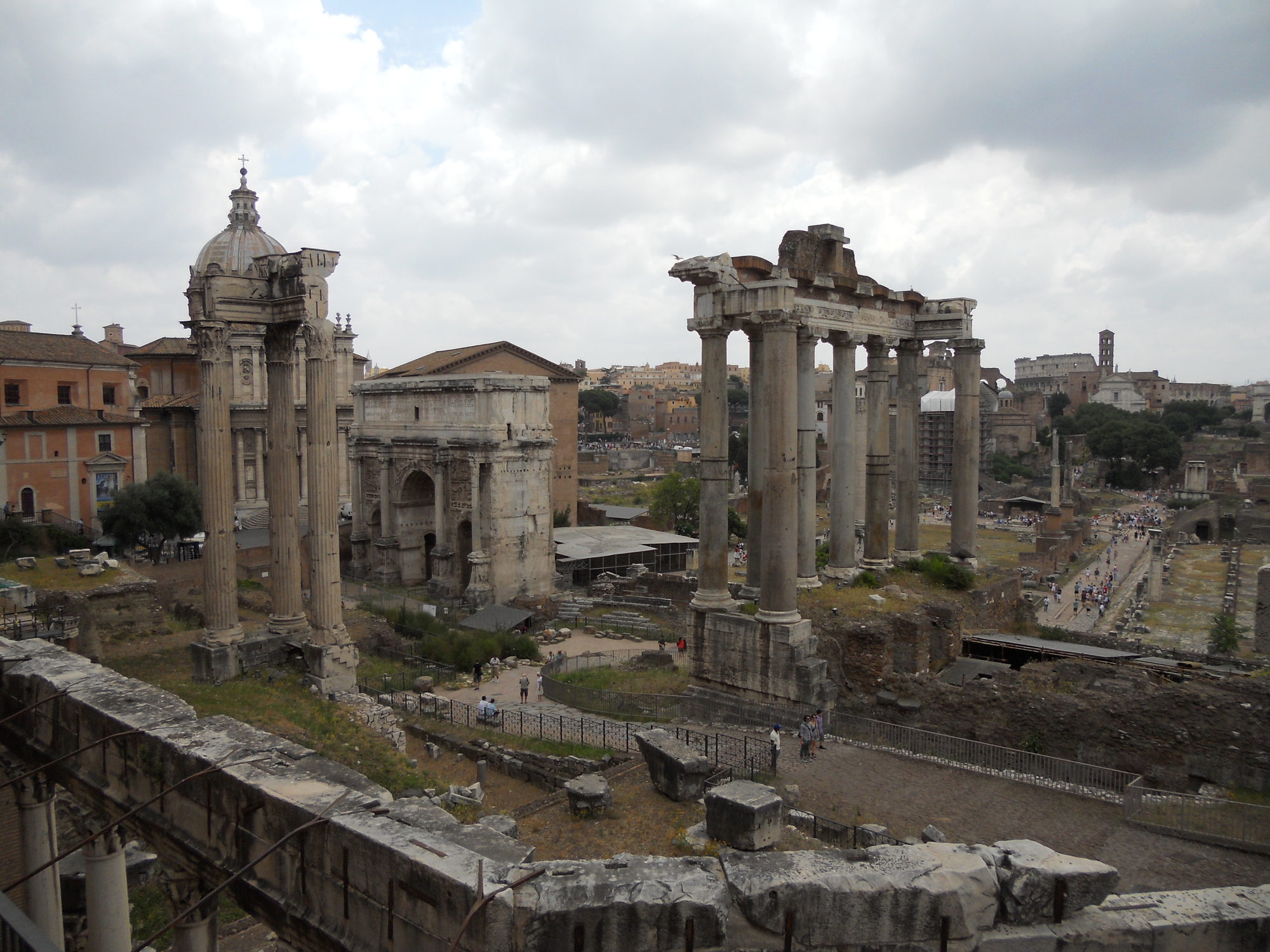 Our audio guided tour was so helpful to have because there are not many markers or signs posted to discern between the rocky remains of one building from another. It took us about an hour to walk through what was considered the heart of the Roman Empire and take it all in at a leisurely pace. Even though most of the buildings have fallen into ruin, it was still an amazing thing to wander over the same cobblestones and pathways that the ancient Romans once took two millennia ago on their way to creating, debating, and politicizing many of ideas and concepts that are still utilized today. 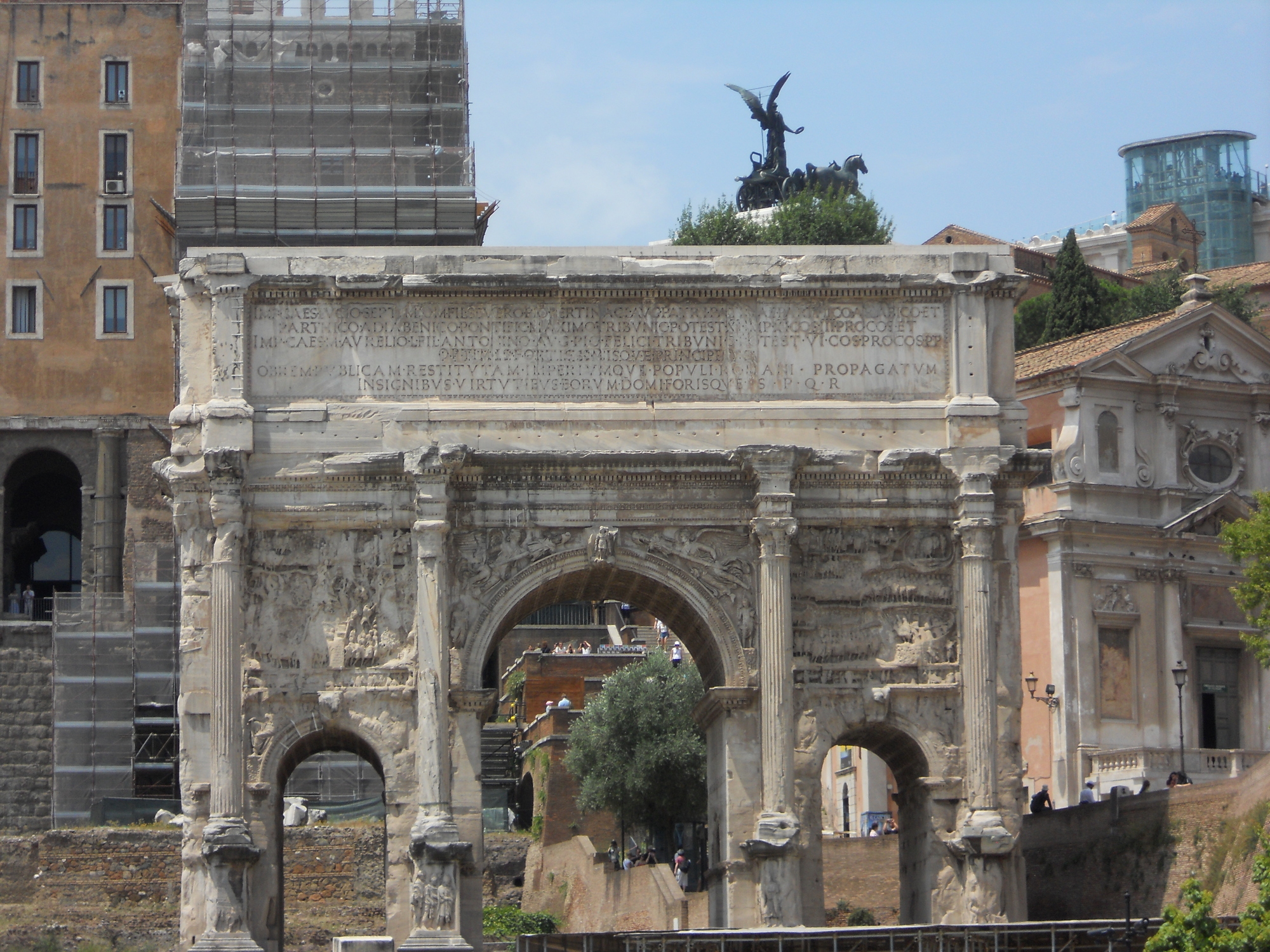 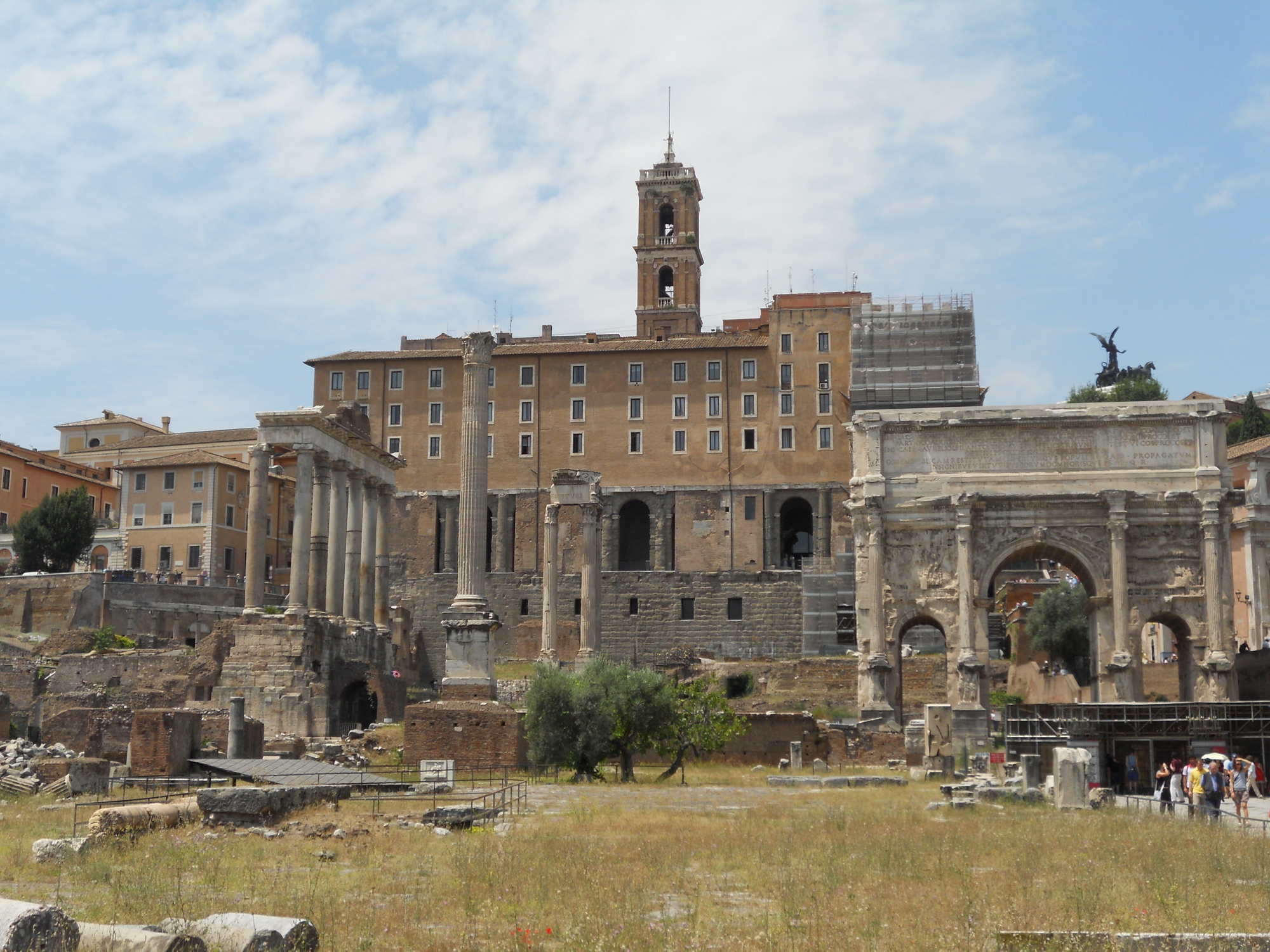 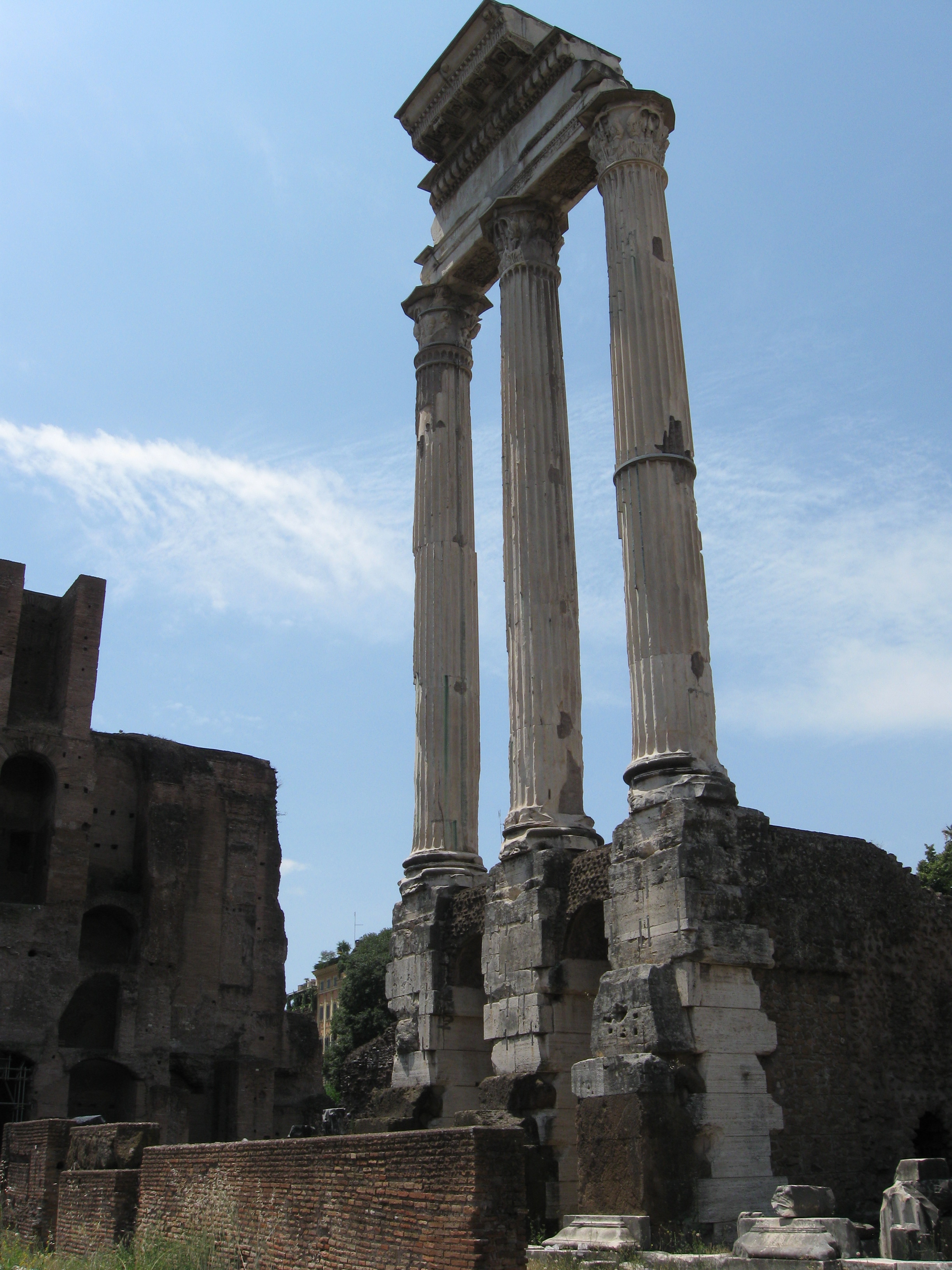 By the time we wandered back to Trastevere, it was late afternoon and we were starving. Unfortunately for us, many restaurants were closed because it was now too late for lunch and way too early for dinner. After what felt like a decade to find a place that was open, we feasted on some good pizza, cooled our sweaty brows with some chilled Italian wine, and didn’t care one bit if the server looked askance at us as we laughed about our poor planning.

Over lunch, Mappy and I regaled Anne with our tales of Siena and the ever-complicated Palio (you can read more about that here, here, and here) in honor of the historic horse race that was to take place that very evening. We had promised Luciano, our B & B host in Siena, we would watch it on t.v. As soon as we were done with lunch, we hastily purchased some bottles of Prosecco at the nearby Enoteca, wine shop, and hurried back to our B & B to find it on our t.v. While our host’s contrada did not win, the three of us cheered mightily for them anyway while waving our Valdimontone flags. 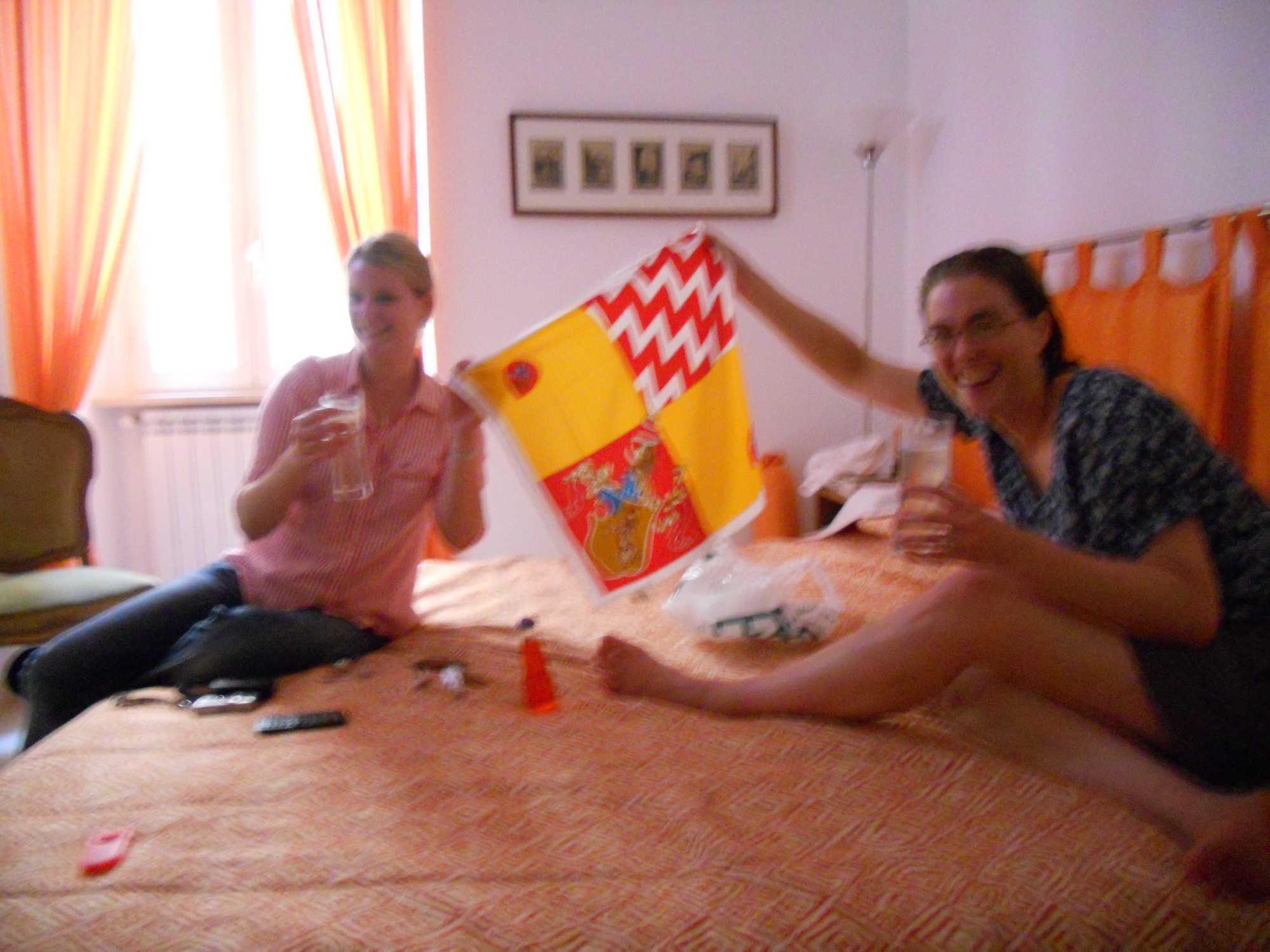 Worn out from miles and miles of walking, Palio cheering and, truth be told, too much Prosecco drinking, we all turned in early. I was disappointed to do so since I really wanted to take the ‘Night Walk Across Rome’ guided walk from my travel book, a walk that would have taken us from the Campo de’ Fiore (big marketplace) through the heart of the city and then all the way to the Spanish Steps. But it was not to be. Mappy quickly fell asleep and Anne had an early flight back to Germany the next morning so that adventure would have to wait for another evening.

In my next post on Rome, I’ll share about our trek out to the catacombs and what we saw when we eventually took the ‘Night Walk Across Rome’.

And how about you, adventurous readers? Has anyone been to Rome? Or had a desire to go to Rome? If you’ve never been, what are some preconceived notions you have about the city? Has anyone else been there and experienced the attitude of indifference like Mappy and I did? Sit, relax, and let’s chat. As always, I love to hear from you.

And Though She Be But Little→