← Letters from Benedict: On Privilege and Prejudice

Continuing on with our Italian adventure, Mappy and I boarded the shortest – and only – train from Siena to Orvieto, a small town in the Umbria region of Italy. This would not have been such a big deal if there weren’t twice as many people on board as there were seats. It’s a good thing we got there early. 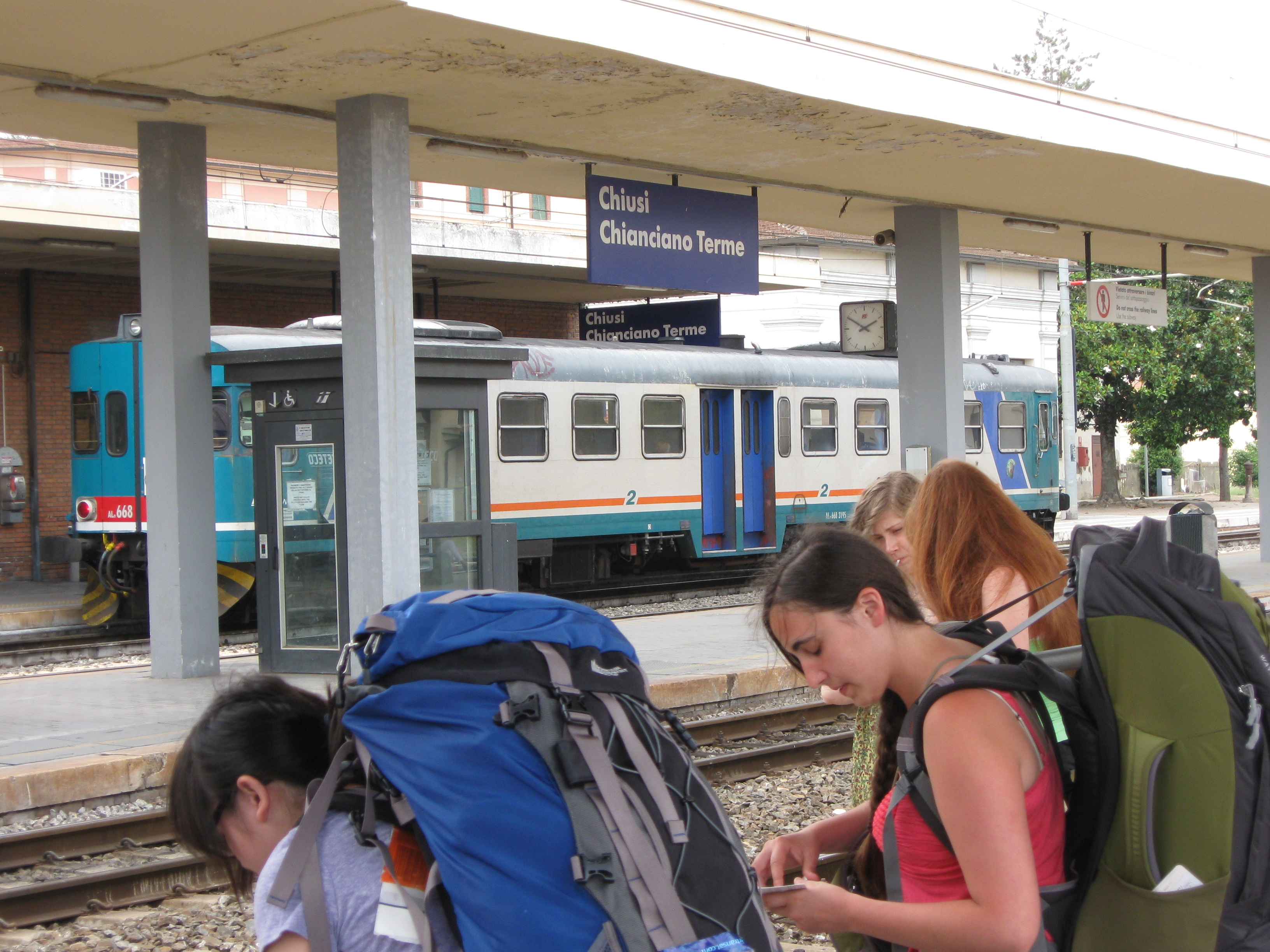 The single car train from Siena

Orvieto was a one night stop over for us on our way to Rome. I wanted to get a small taste of the Umbria region and Orvieto seemed like a good place for us to go because a) it was on the train line (important for us since it was our only means of transportation) and b) it has an underground system of Etruscan and medieval caves and tunnels that sounded fascinating to explore.

Rick Steves describes Orvieto in his Italy 2009 guide-book as sitting “majestically a thousand feet above the valley floor on a big chunk of tufa, a very easy-to-dig volcanic rock. While a regional power in the Middle Ages, it was also one of the major dozen Etruscan cities centuries before Christ. Some historians believe Orvieto may have been a kind of Etruscan Mecca (locals are looking for archaeological proof — the town and countryside are dotted with Etruscan ruins).”

The Etruscans founded a civilization around 700 BC in what today is known as the Tuscany and western Umbria regions of Italy. It was assimilated into the Roman empire around the 1st century BC. It is thought among scholars and archaeologists that early Rome was predominantly Etruscan until approximately 396 BC, though much of what is known about the Etruscans is derived indirectly from both Roman and Greek sources. The Etruscans are thought to have created the literal and figurative foundation of Rome.

As I’ve said before, archaeology and ancient cultures fascinate me so Orvieto was a must-see on my list when traveling in Italy. It is a small town, easily seen in a day and known for it’s Classico (white) wine, its grand Duomo, and the colorful ceramics produced by the many artisans living there. We arrived in the late afternoon and were not scheduled to leave until late the next day, leaving us ample time to explore the narrow, winding streets of the Umbrian village up on the hill. 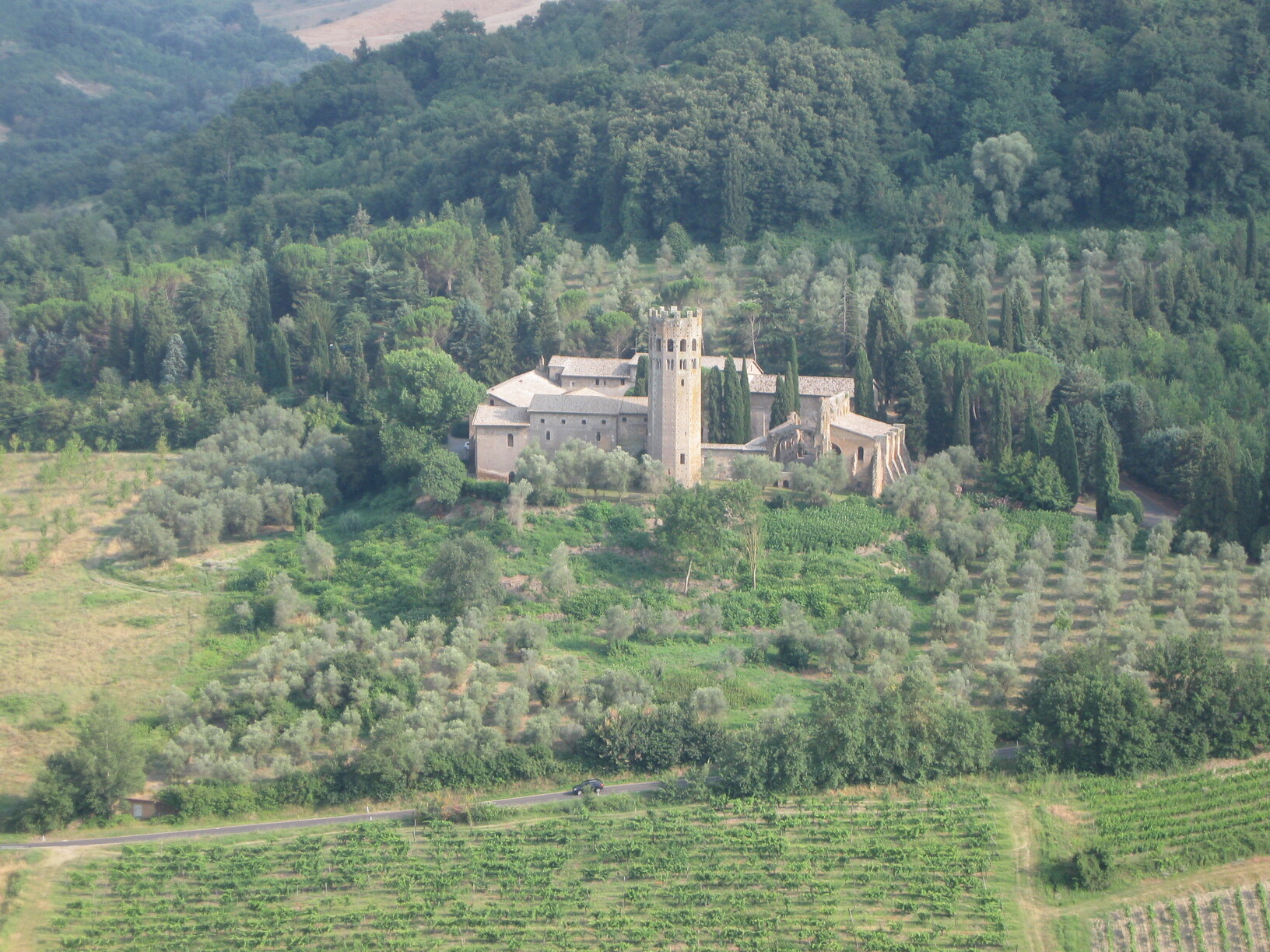 The train arrives at the foot of the hill (in the part of town referred to as “lower town” – or the more modern part) next to where you can buy and board the funicular that will carry you to the top of the hill to “upper town” (or medieval part of Orvieto). From there, it is an uphill walk to the town’s main piazza (Piazza del Duomo) or you can catch a bus that will take you there in a matter of minutes. 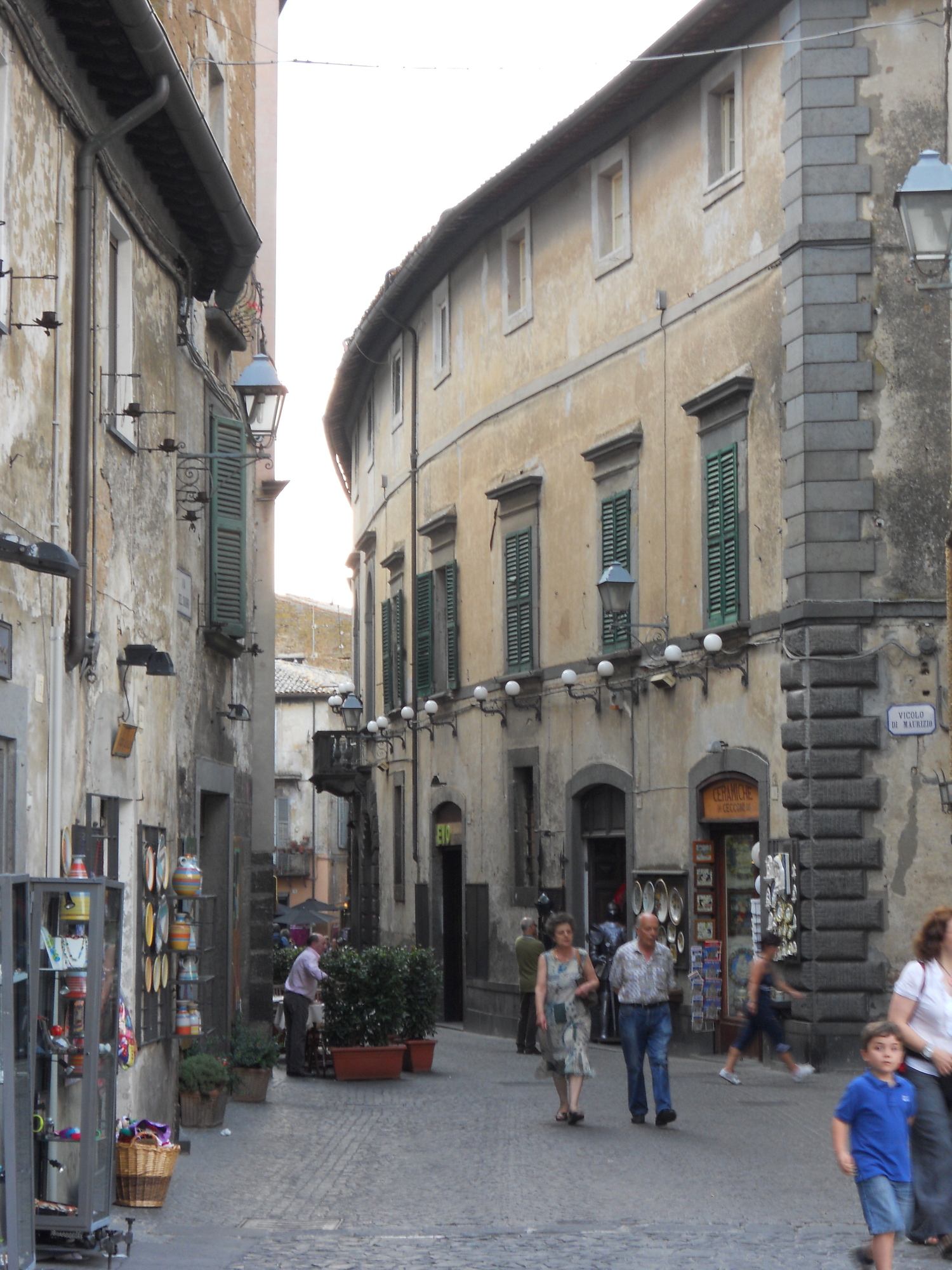 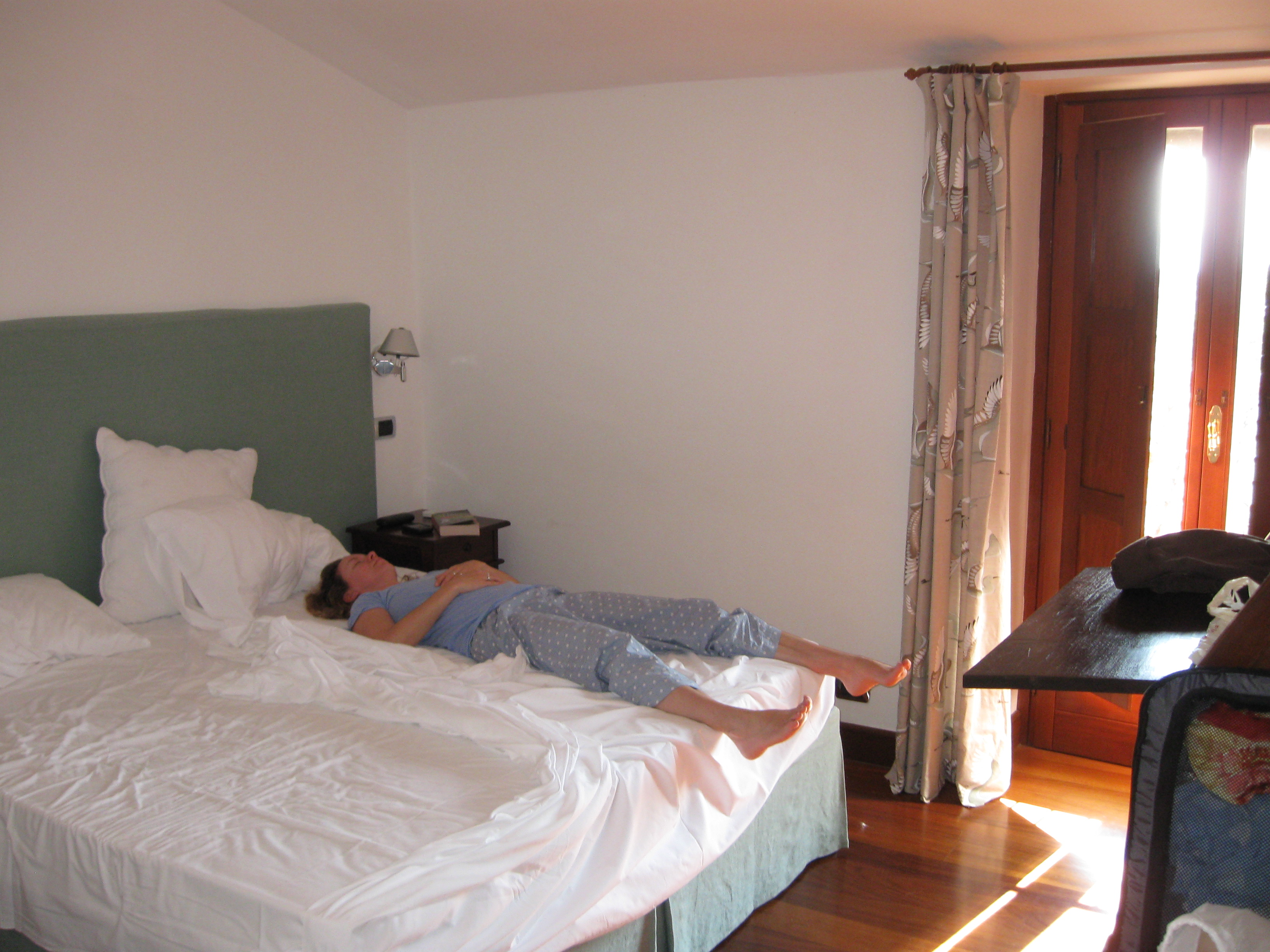 Our lovely room at B & B Sant’ Angelo. That bed was really comfy and hard to get out of the following morning…

That afternoon, Mappy and I bought tickets for the Underground Orvieto Tour, an hour-long tour of a portion of the extensive, labyrinthine Etruscan and medieval caves that snake through the tufa beneath the medieval/upper town. Our guide took us several hundred feet underground into the original Etruscan caves where the remains of an olive press stood as well as two 130 foot well shafts originally dug by the ancient Etruscans. 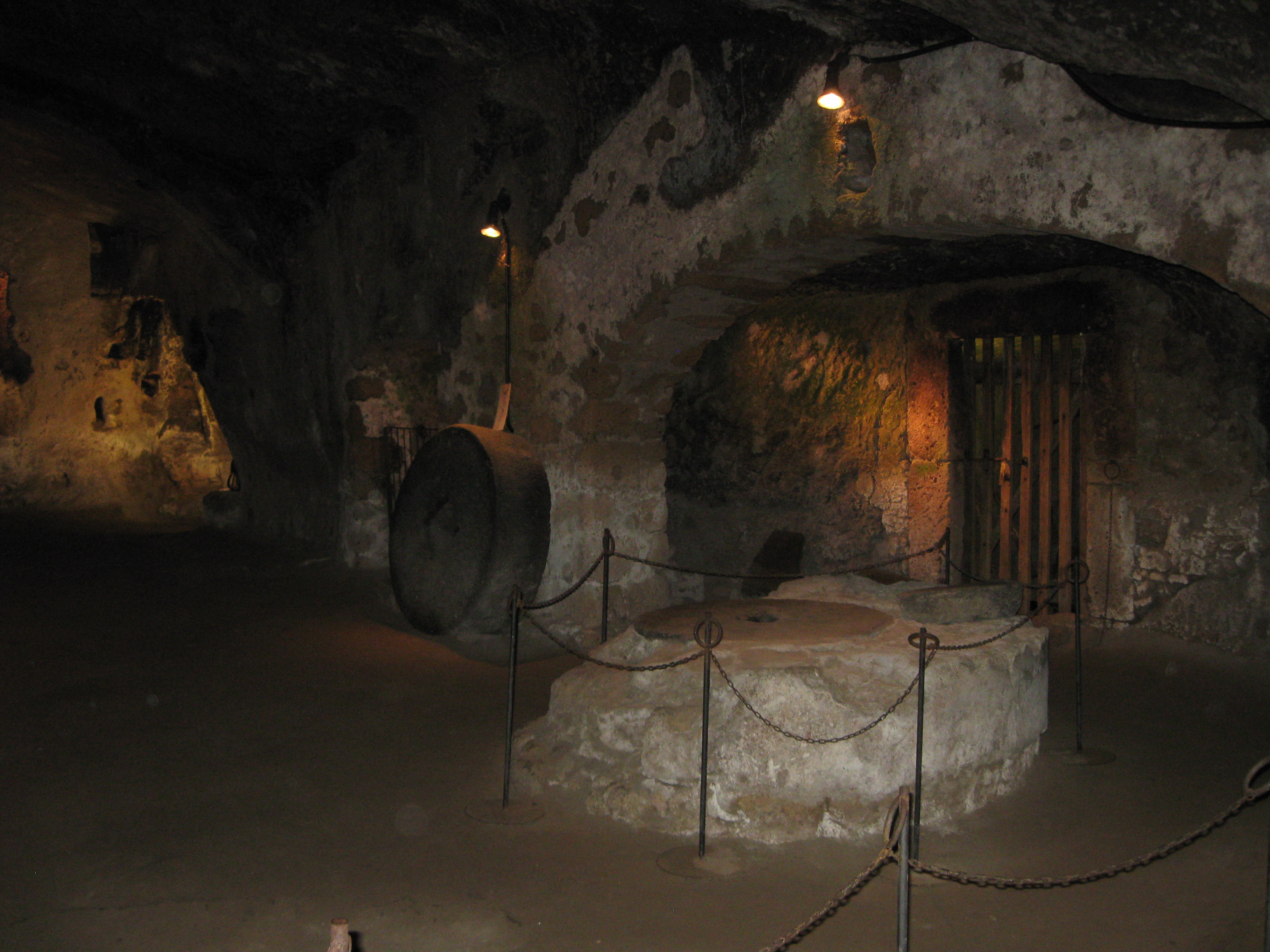 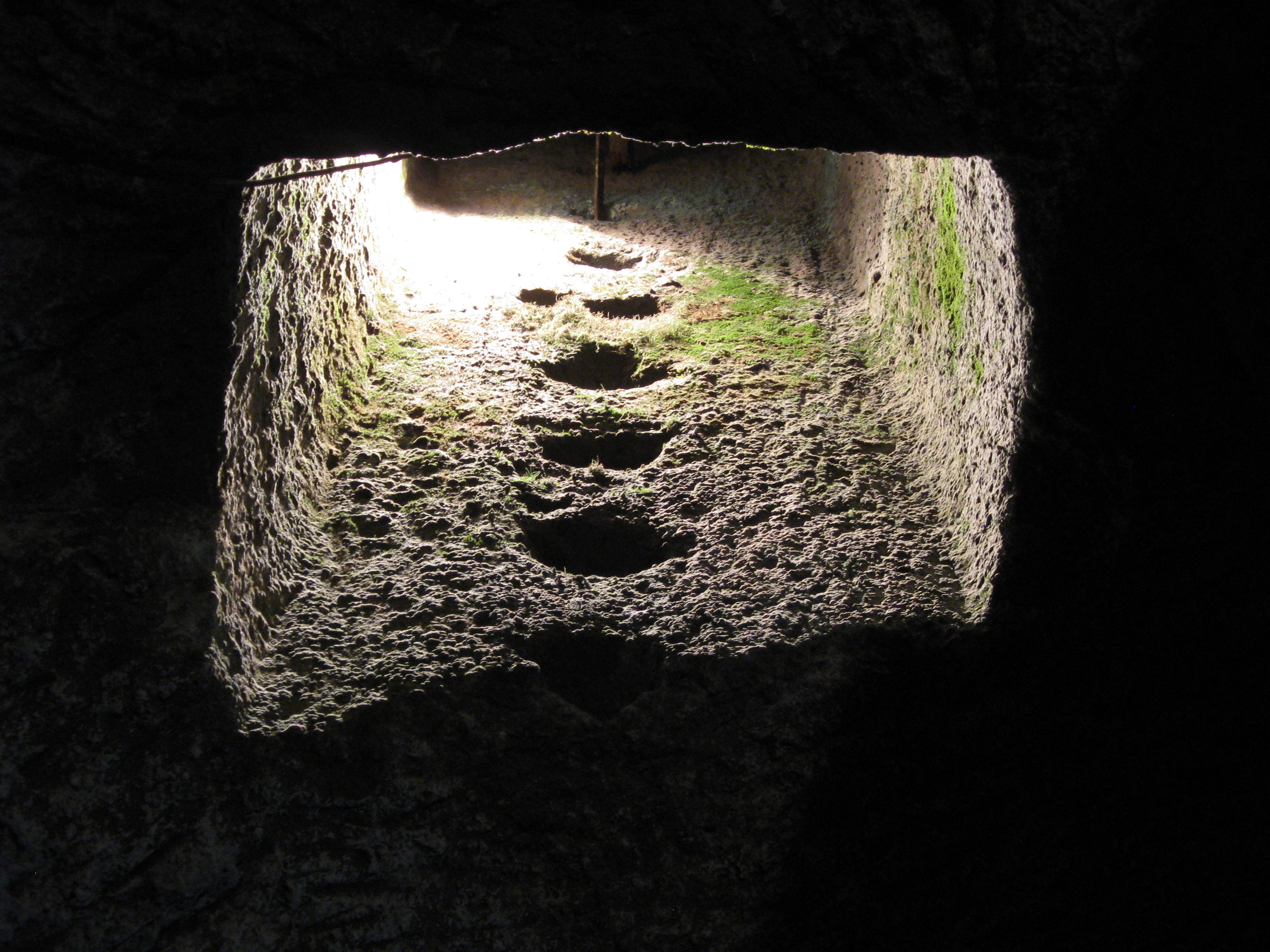 Our guide also explained that the beneath the homes of many of the city’s noble families were secret escape tunnels carved in the soft rock to be used as emergency escape tunnels in the event of an attack. The tunnels would lead to a point a safe distance away from city walls.

While the tour was interesting, it didn’t delve into the archaeological and historical aspects of the caves and tunnels as much as I would have liked. In a relatively short amount of time, we were above ground again. On the bright side, this left us more time to explore the small town and, of course, scope out the best gelato. 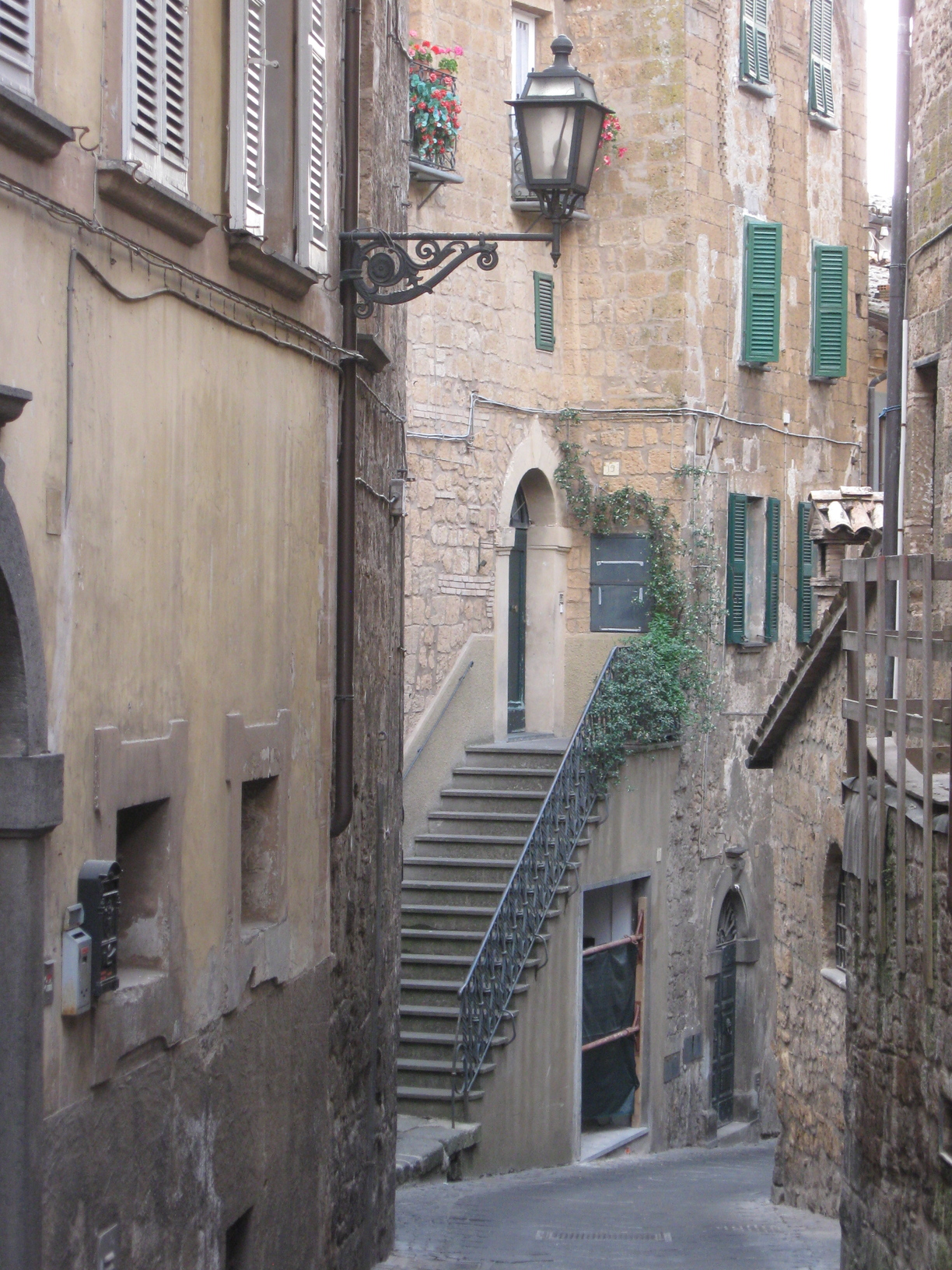 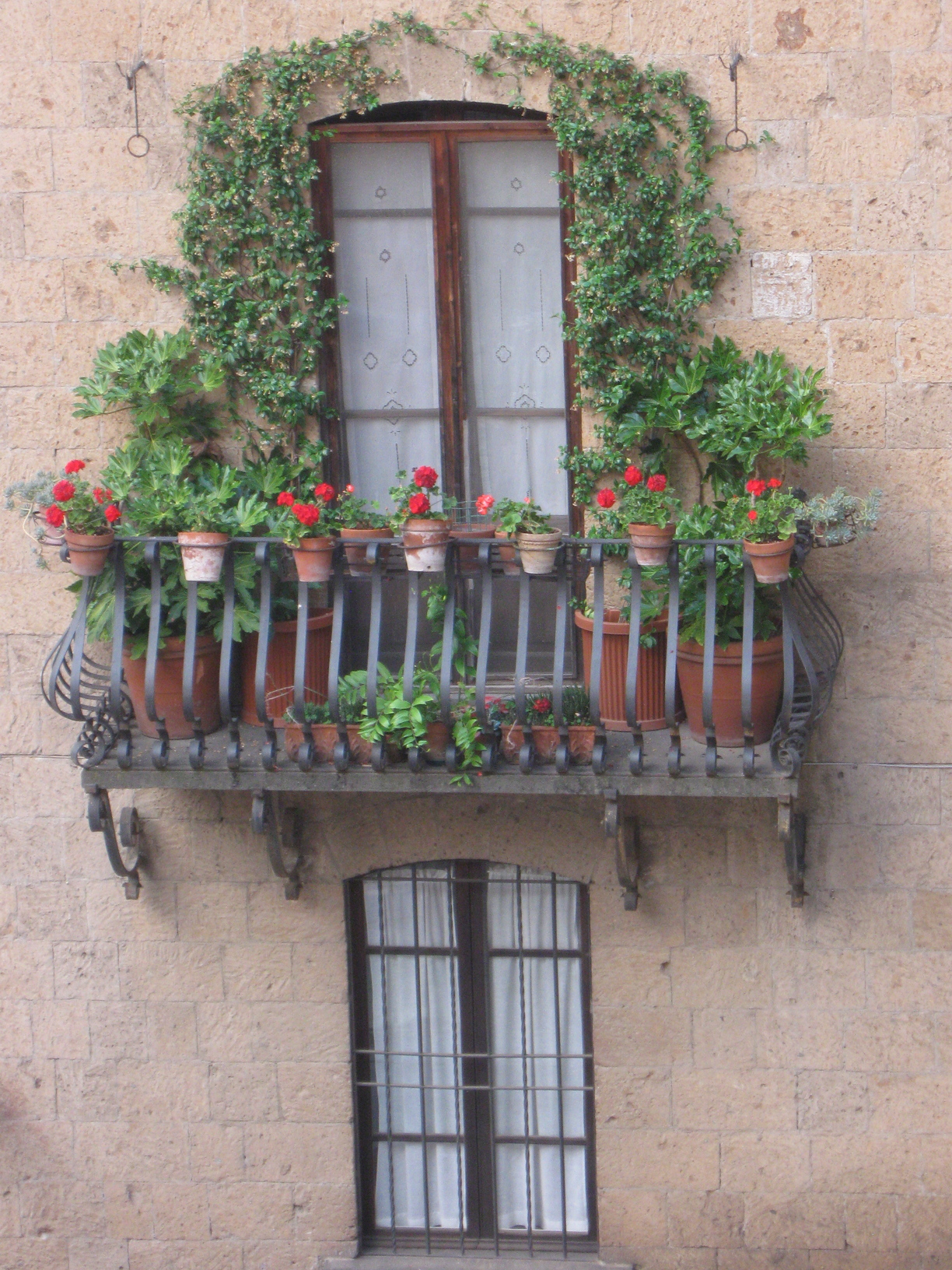 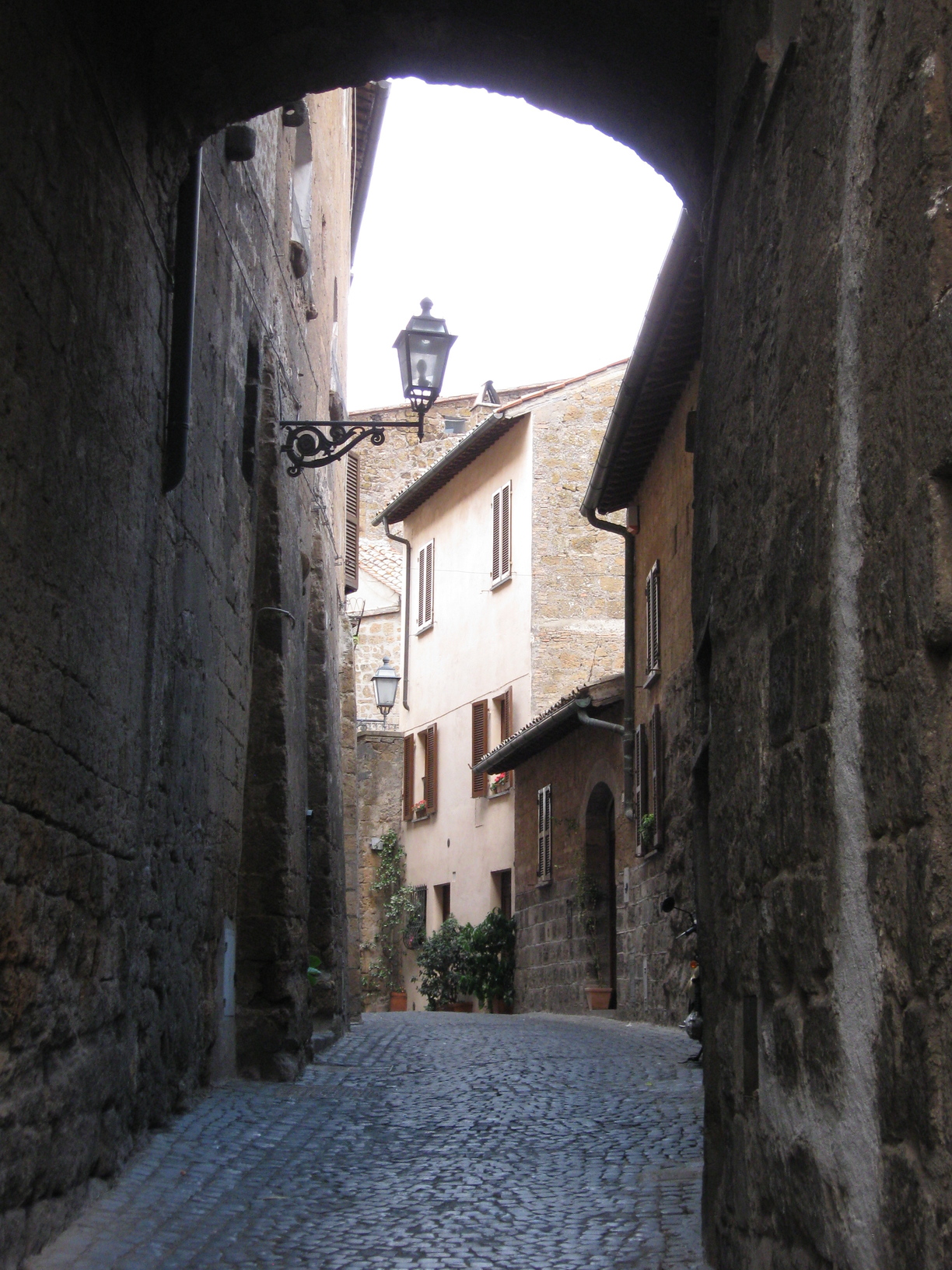 During dinner, Mappy shared that she was still hoping to fulfill her goal of seeing someone she knew while we were in Italy. We both knew it was a long shot to be in the same place at the same time in a country as big as Italy as someone you knew from the U.S. But when we were walking back to the B & B later that evening, the stars must have aligned to grant her wish because Mappy stopped in her tracks in the middle of the Piazza del Duomo, pointed and said, “Oh my god, I think I know that guy.” As it turned out, a college friend of hers was in Orvieto with his wife on a month-long tour of Italy. We were both floored by this coincidence. Her travel mojo definitely deserved a raise for that feat of serendipity.

The next morning we decided to explore the inside of the Duomo, the Gothic-style cathedral built in 1330 in the center of town, as well as the Museo dell’ Opera del Duomo, the Duomo museum located next door to the cathedral. 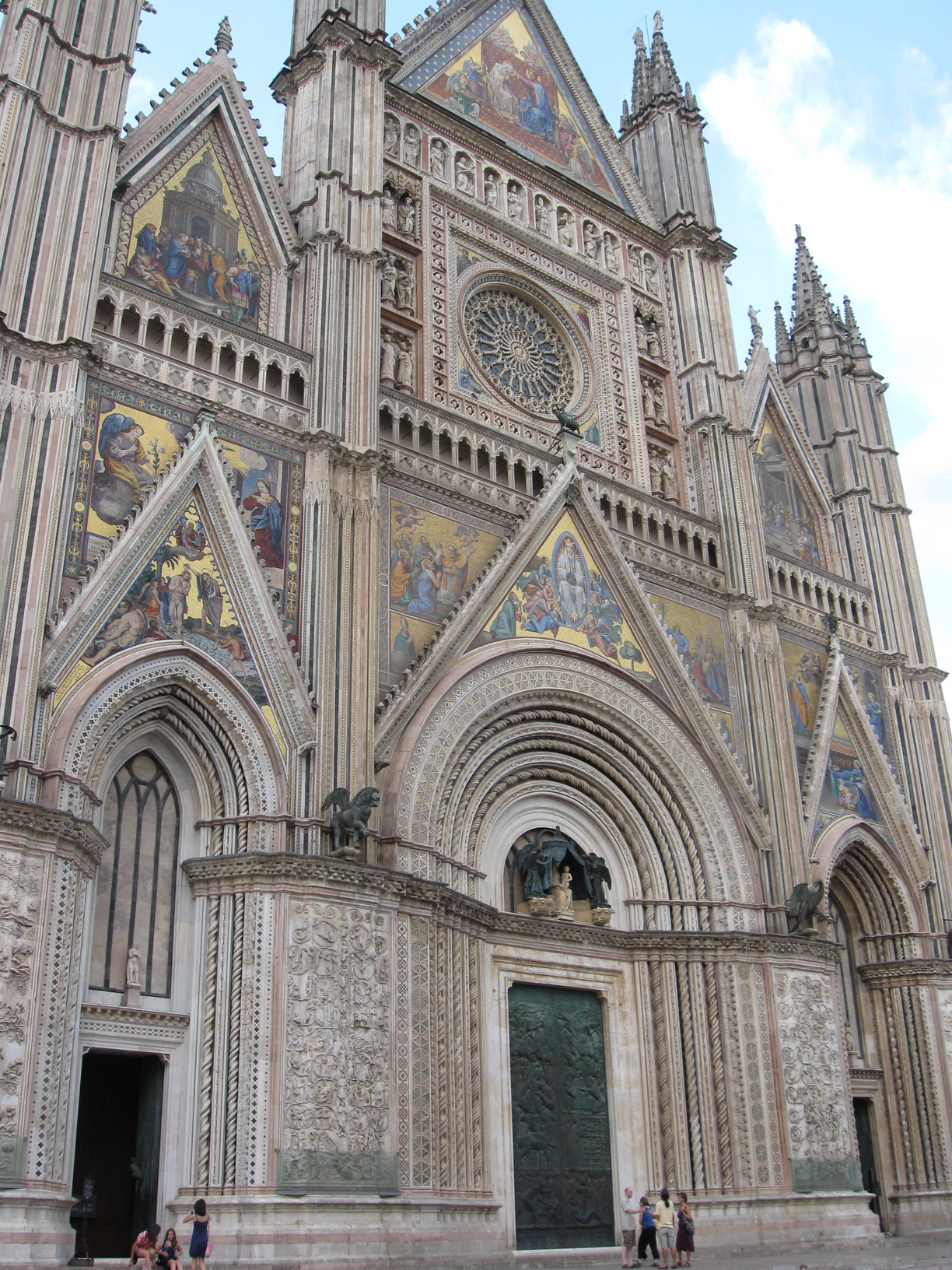 Facade of the Duomo

The facade of the Duomo is colorfully ornate and is fronted by four massive marble pillars carved with biblical scenes that tell the story of the world according to the bible (one pillar each for Genesis, Old Testament, New Testament, and Revelation).

The interior of the Duomo is spacious and open. According to Rick Steves (Italy 2009 edition), the architect created the illusion of a bigger space than appears by making the nave wider at the back and narrower at the altar so that it seems to be a longer distance than it is to the front of the cathedral. I didn’t notice this when I visited the Duomo. Rather, I was more interested in the twenty or so art students who were scattered about drawing architectural segments of the interior of the cathedral. Sneaking a few peeks over their shoulders, I caught glimpses of some amazing drawings in the making.

Back outside, we sat for a while on the steps of the Duomo to observe some of the every day goings-on in the Piazza del Duomo. Mappy did some of her own drawing while I watched with fascination a nun playing soccer with two pre-teen boys. I loved how it all seemed like no big deal to any of them to have a pick up game of soccer like that in the piazza in the middle of the day. 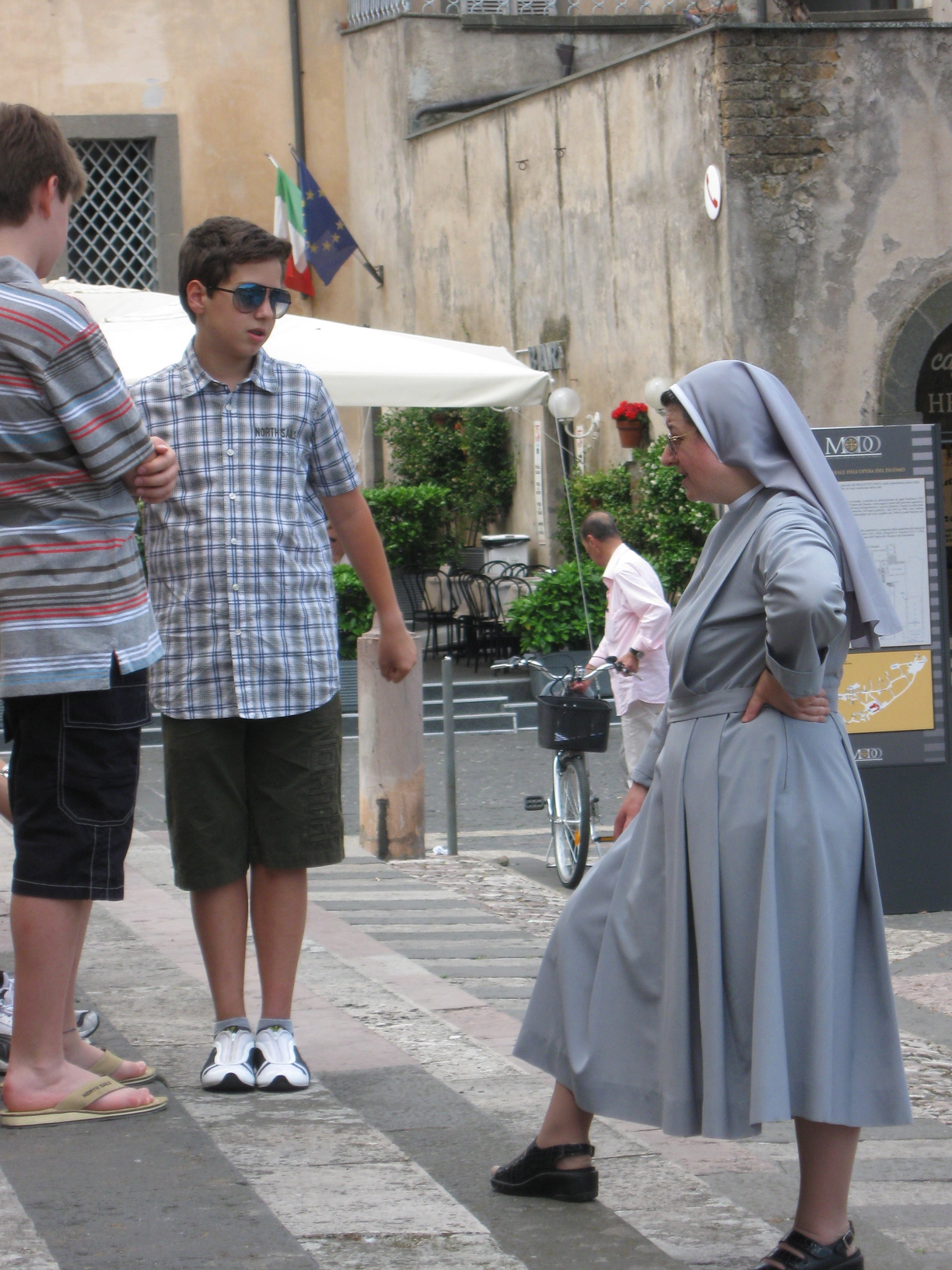 Mappy and I both wanted to buy some ceramic pieces before we left since it is one of the things for which Orvieto is known. Lots of small shops lined the main street and the colorfully displayed wares were everywhere you looked. What we soon discovered, though, was that unless you knew exactly which piece you were going to buy and you had every intention of buying it, you would be scrupulously watched and hovered over whenever you entered a shop to just browse.

Mappy had learned in her Italian culture class that in Italy it is frowned upon to do what Americans often do when shopping: touch things, examine them from many angles, and then put down the things you had considered buying but then decided against. Even though we weren’t being “typical Americans” in this way, the shopkeepers in nearly every shop not only watched us carefully when we entered, but they were also scowling and glaring at us the whole time, as though they were daring us to pick something up and break it. It was very intimidating and made us both feel very uncomfortable. We did end up buying a few things, but we felt as though we were treated like boorish criminals and left Orvieto feeling sour about the experience.

After some more gelato to soothe our wounded egos, we spent the remainder of our time in Orvieto just wandering the streets and taking photos. Aside from the treatment we received in the shops, Orvieto was a delightful, quieter stop on our tour of Italy.

Next up, I’ll share what we did over five interesting days in the heart of Italy: Rome.

And now, fair readers, it’s your turn to ask those burning questions and/or make intelligent comments. The kasbah floor is open and the tea is ready. I’d love to hear from you.

17 thoughts on “The Underground World of Orvieto”

← Letters from Benedict: On Privilege and Prejudice