← Letters from Benedict: On Freedom in the Kasbah

During breakfast on our third day in Siena (you can read about the first and second days here and here), our B & B host, Luciano, told us the Palio contrade horse assignments were to take place in Il Campo, the main square. He was going into the city to see it so we decided to tag along for a ride. Luciano dropped us off at the  Porta Romana and we headed off to Il Campo to check out this ceremonial event. 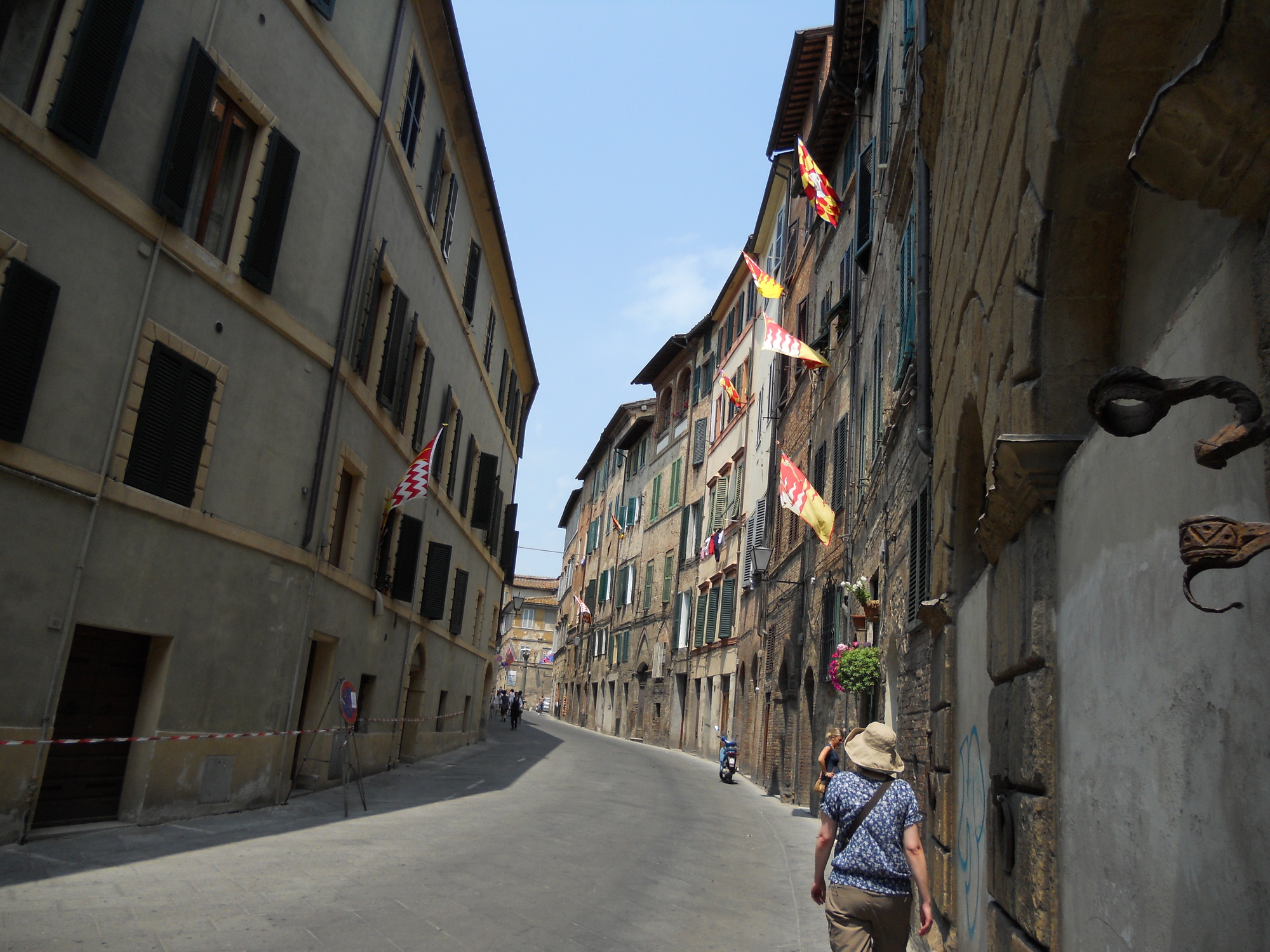 Obviously, the whole thing was in Italian so we didn’t understand everything that was said, though it was very clear that this process (as with all of the other ceremonies and traditions having to do with the Palio) is done with great loyalty to your contrada. To give you a sense of how deep the ties to one’s contrada run, here is an excerpt by Cristina Fassio who wrote about Siena and the Palio for Slow Travel Italy:

“Every year, on a contrada’s Saint’s Day, all the babies born during the year are baptized. This is done at the fountain of the contrada and has nothing to do with the church. You are given your fazzoletto (scarf) that you will keep with you for life. You are also given your “certificate” for lack of a better word. You are now a Contradaiola. You are one for life. Your brothers and sisters of the contrada will be with you forever, through good times and bad, at all of the great events of your life as well as the little ones. They are your family. They will protect you. 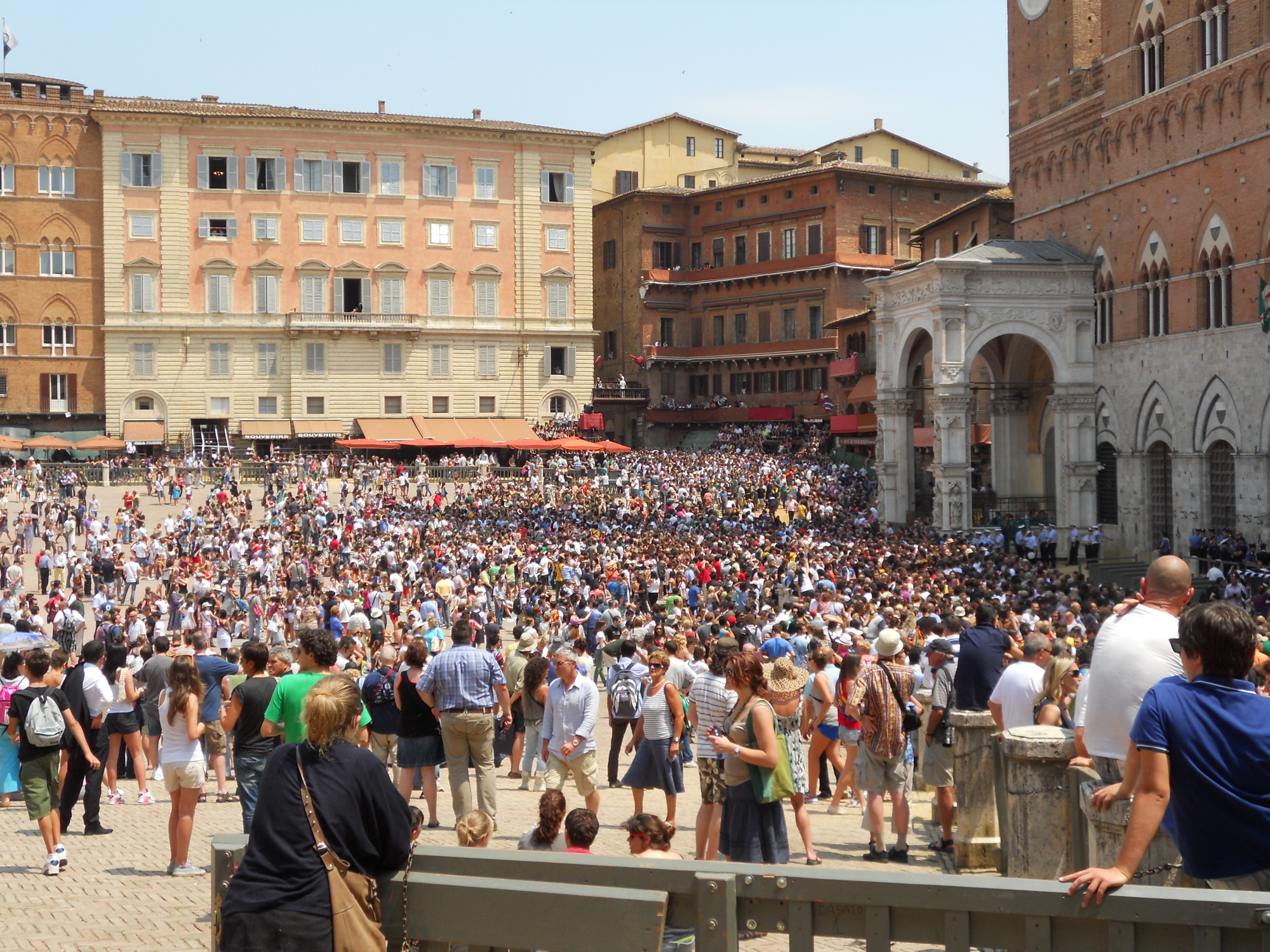 The crowd gathering for the horse assignments in Il Campo

Three days before the Palio, the horses that will run in the Palio are selected during short trial runs at midnight. The order in which they are chosen designates which number (1 through 10) they’re given. Those numbers are then put into a drawing for later that morning. The mayor of Siena selects a number and a name of a contrada before a crowd of Contradaioli. If the horse drawn for a contrada is a good one, then there is much cheering and clapping. If the horse is not such a good one, then the people are still cheering but not as loudly or joyously. 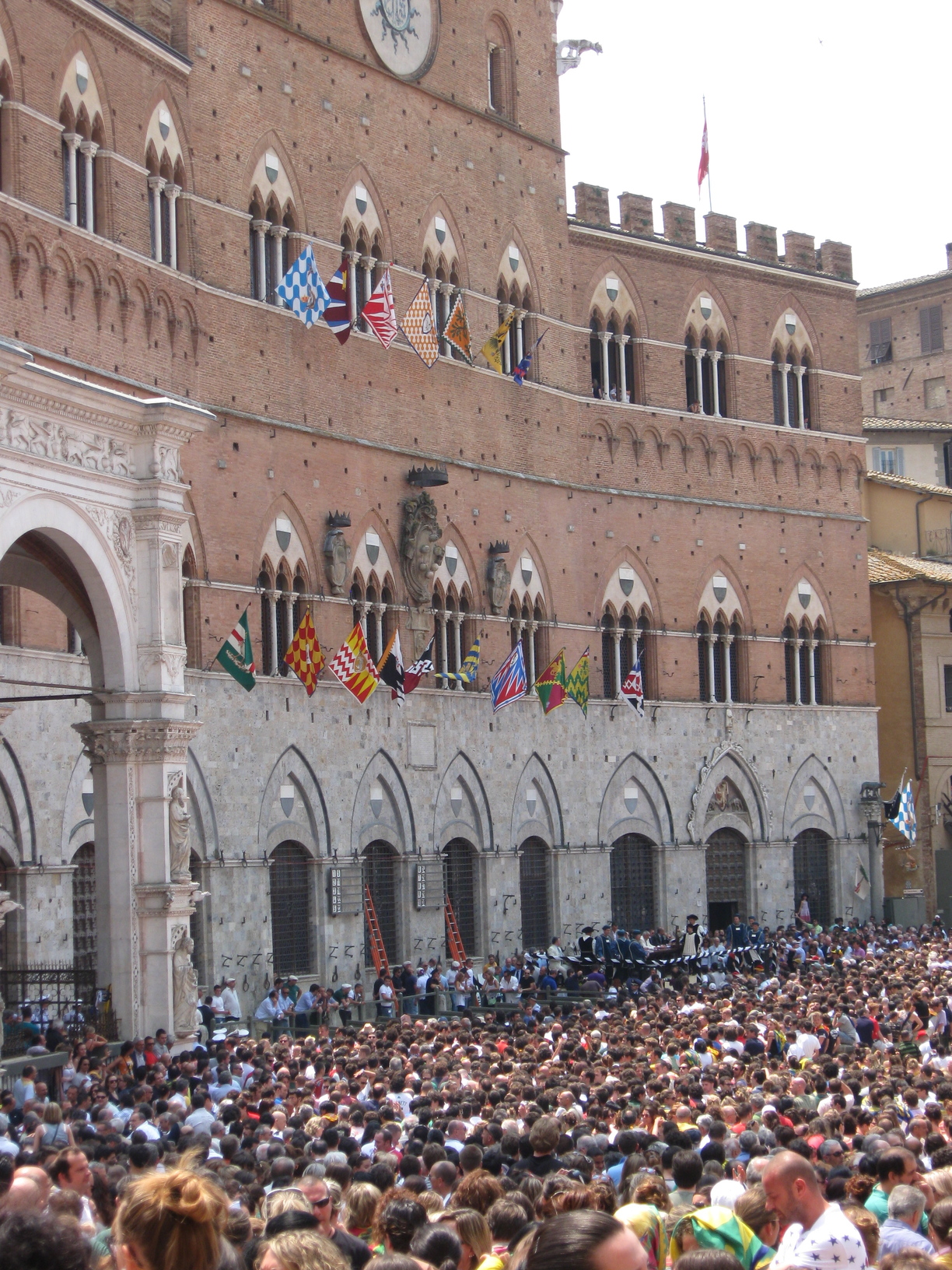 Palazzo Pubblico (City Hall), Il Campo. The flags of the ten competing contrade are hung below the seven flags of those who aren’t competing during that Palio.

The traditions of the Palio have endured over centuries and are still carried out much in the same way as they were in the 1300’s when the first race was held. The fanfare, the passionate cries of joy (or frustration, depending on the horse drawn), and the comraderie were amazing to witness.

Mappy and I were giddy with the excitement of it all and promptly went and bought a Valdimontone scarf for ourselves as a show of support for our hosts’ contrada. Of course, they were a touristy version of the real fazzolettos given to true members of the contrada, but we were happy with them nonetheless. When Luciano picked us up that afternoon, we excitedly showed him our scarves like little kids coming home from school with some new artwork. I think he was touched by our gesture of loyalty.

Later that evening, our last night in Siena, Mappy and I had bought some food in the city to bring back to Il Canto so we could have another sunset “snack” outside on the rooftop terrace where we had shared some Prosecco with Luciano the previous night. 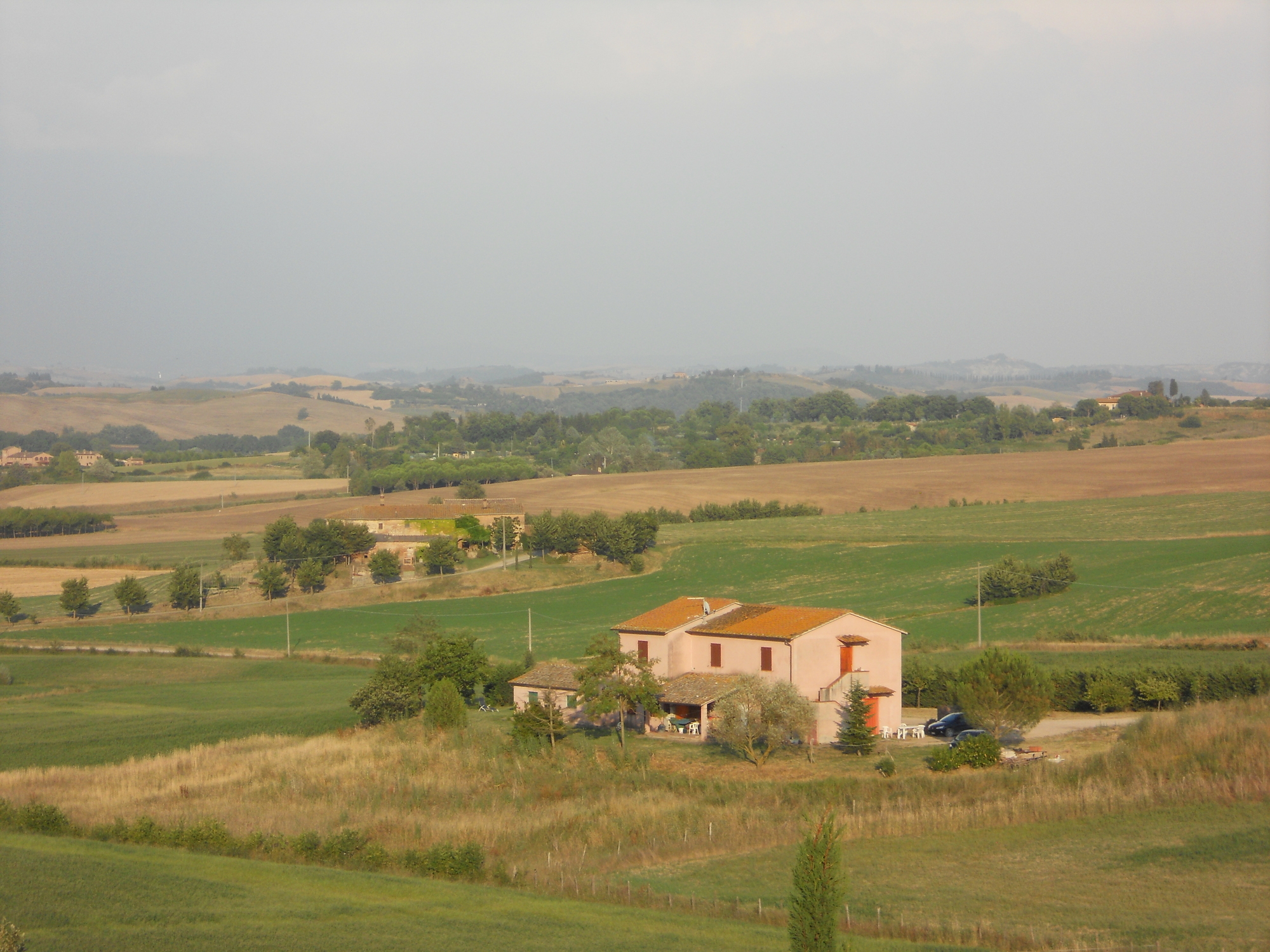 View from the rooftop terrace

We were feeling quite reverent and solemn about ending our time in Siena and spent much of the dinner recounting our favorite parts. A gentle breeze cooled us, the food was wonderful, the scenery idyllic. It was shaping up to be a lovely last evening in Tuscany.

And then the bird from hell showed up.

You may be tempted to think the following story is all fear-based hullabaloo caused by my F.A.B. feature (read more about that here). And you would be oh so wrong.

As Mappy and I sat contentedly on the rooftop terrace, sipping our Prosecco, eating our fine food, minding our own business and not bothering any creatures, a small black bird began his slow, insipid intrusion into our meal. At first, he just perched on a nearby chair and stared at us with his beady eyes. This was creepy but I was willing to ignore it as long as he stayed over there. 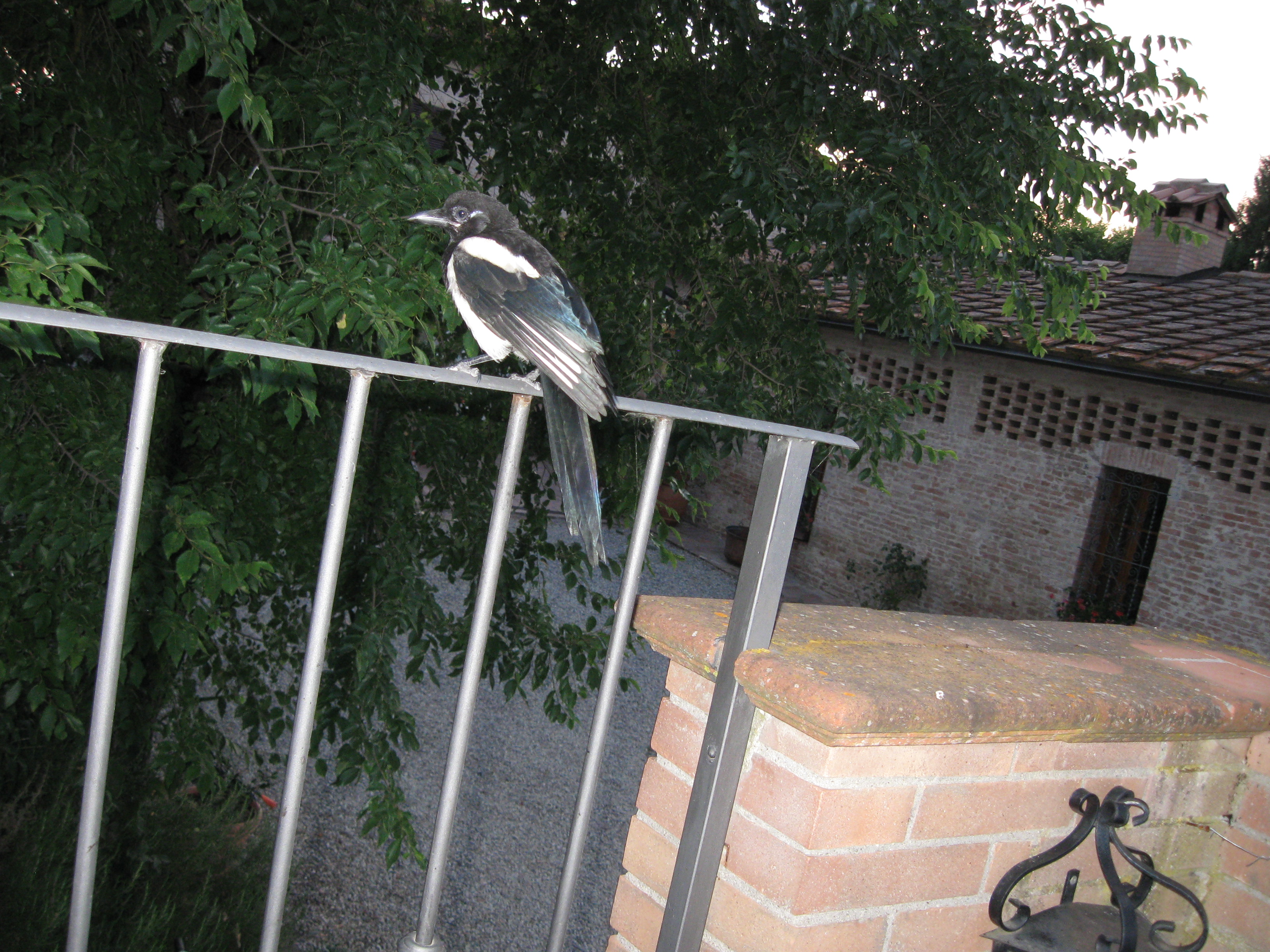 But then he hopped closer and closer until he eventually tried to land on our table right next to me. Mappy tried numerous times to shoo him away but the @#$%& bird had it in for me. He would fly off for a few minutes, only to return by *casually* swooping at our heads. (I say casually because it wasn’t like in Hitchcock’s The Birds or anything like that. It was more like “Hey, I’m gonna tease those ladies with a little bird acrobatics and really freak out the short one.”) 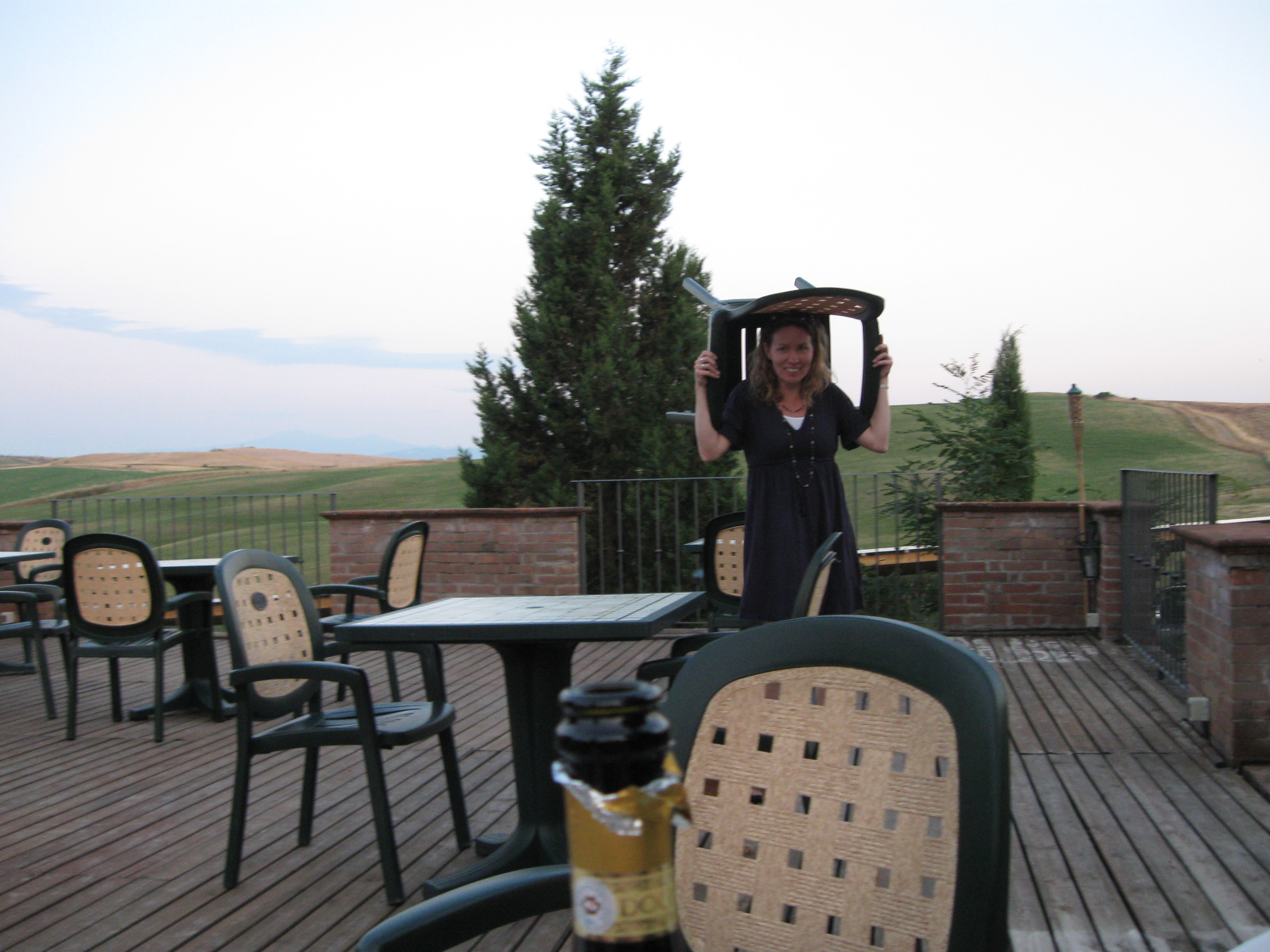 We then moved to the upstairs loggia where we had eaten our ‘snack’ the first night at Il Canto. Thinking it was the food that drew the bird from hell to us, we took only the Prosecco out there to enjoy the last of the sunset. 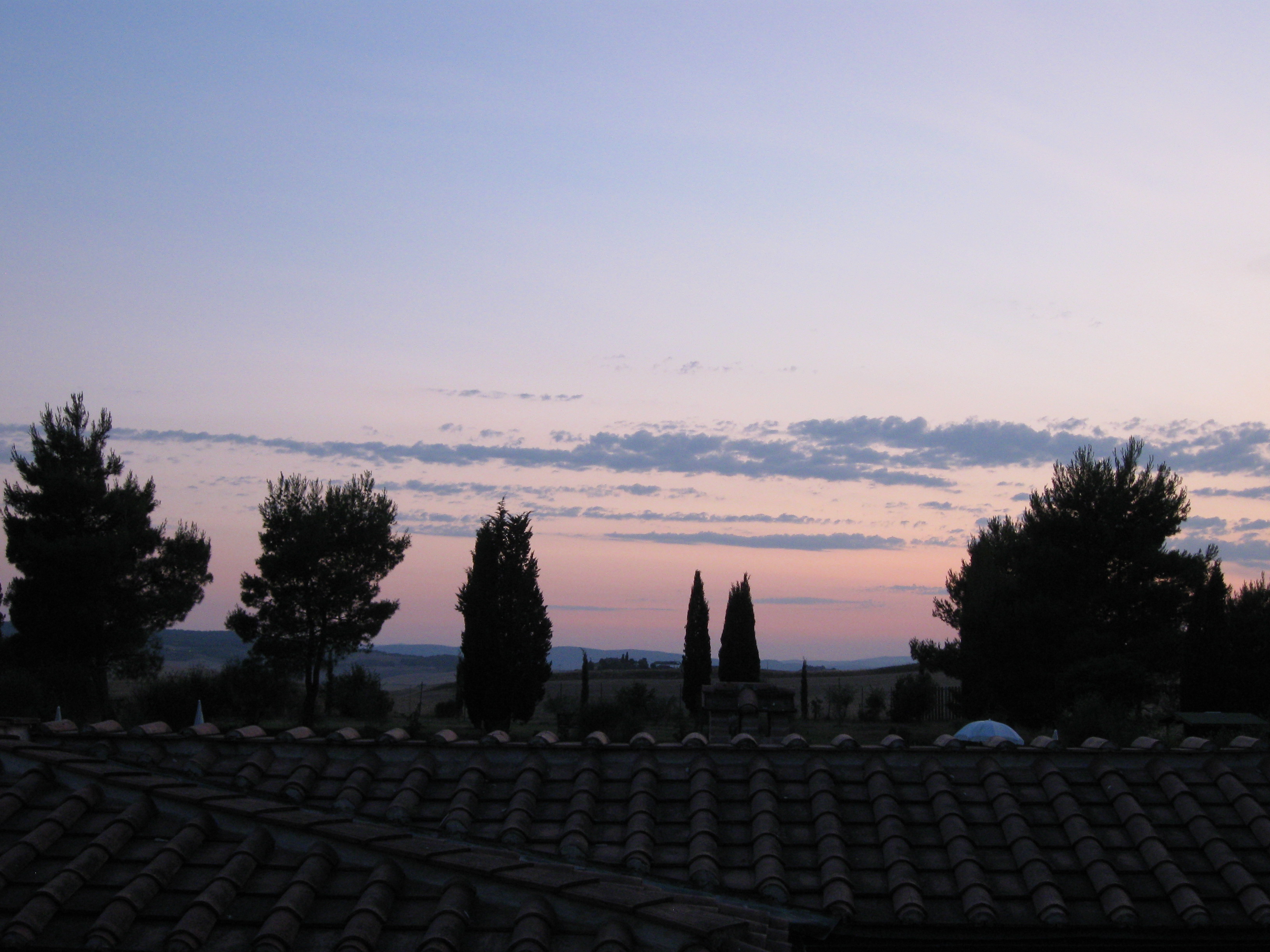 Guess who showed up moments later? No, not a certain classy British actor or Brad Pitt with beignets. 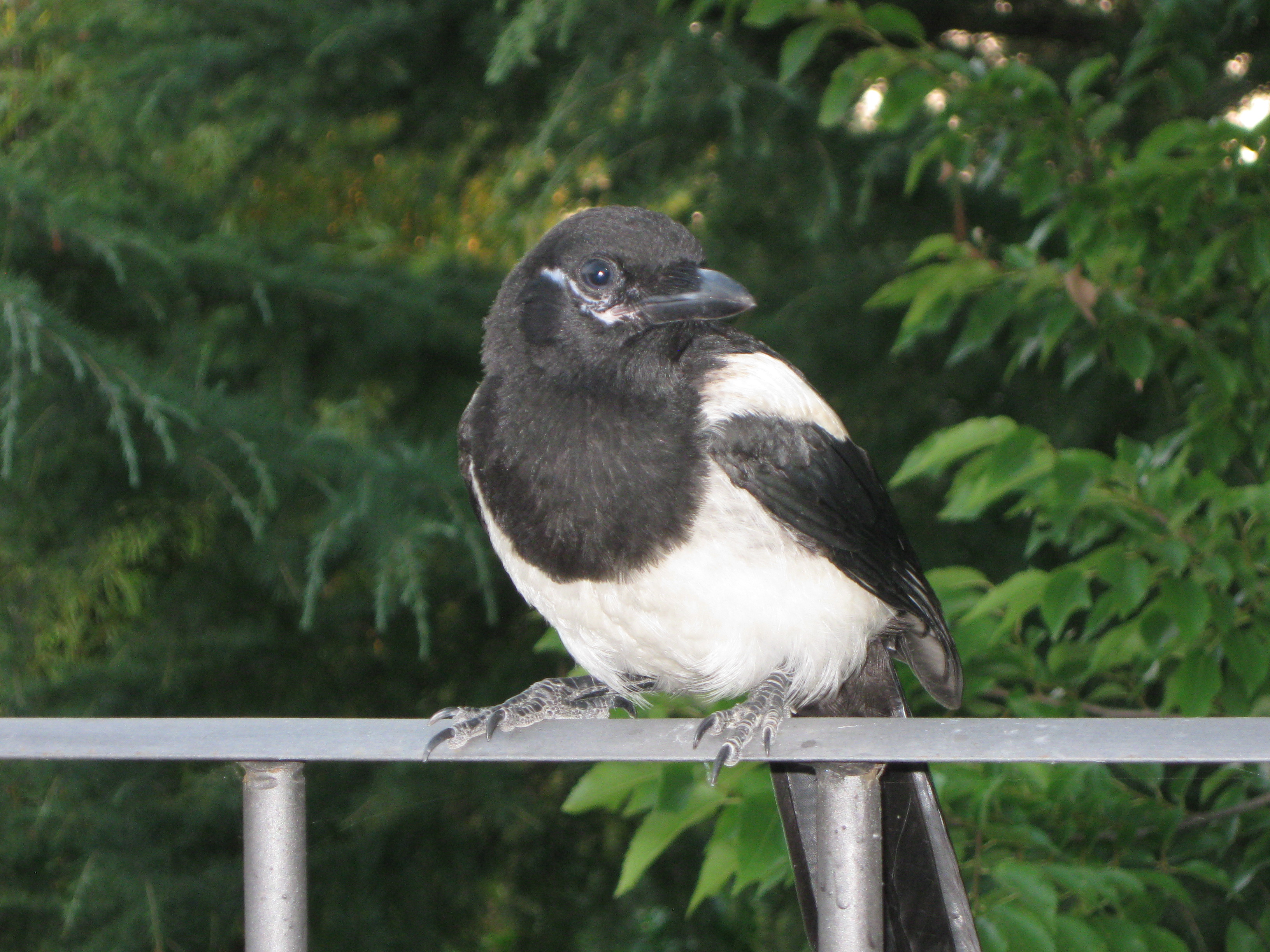 Mappy surmised he must be someone from a past life with whom I had unresolved issues and wasn’t it nice of him to give me this chance to work things out? While this would support my theory of ‘my people’ coming from the Mediterranean region (more on that here), I was too busy fighting for my life to remind her of that. I can’t remember exactly what I said in response, but the subtext beneath the swearing was “I respectfully disagree with you.” We finally gave up our seats on the loggia and went inside to start packing for our departure the next day.

Siena is an amazing place to explore. With deeply rooted traditions and warm, welcoming people, it should be at the top of everyone’s must-see list when visiting Italy.

My advice? Read as much as you can about the city before going. Plan to walk everywhere and if you’re staying outside of the city in a hotel or B & B, rent a car (in nearby Florence) so you aren’t relying on your hosts to drop you off at psychiatric hospitals disguised as ‘drop off points’ by one of the gates. Wander through as many of the contrada as you can so you can see their individual cultures and traditions. And if you’re invited to a festivity or dinner, by all means go, even if you won’t know anyone and can’t speak the language. Attending the Palio dinner was one of the big highlights of our trip.

And whatever you do, watch out for birds with past life scores to settle. Just sayin’.

And now it’s your turn! Any lingering questions about Siena or the Palio? Any one else been tormented by a bird with attitude? I’d love to hear from you!

6 thoughts on “Siena, Part 3: The Palio is Still Complicated”

← Letters from Benedict: On Freedom in the Kasbah