← Letters from Benedict: On the Olympics, Magic 8 Ball, & the Ace of Hearts

Letters from Benedict: On Freedom in the Kasbah→

On our second full day in Siena (you can read about the first day here), Mappy and I explored more of Siena during the day, taking in the festive air coursing through all of the contrade over the upcoming Palio. Then, for dinner that evening Laura and Luciano had graciously invited us to their contrada’s church dinner, probably because we were the pathetic guests without a car to get back to the city to feed ourselves. Not wanting to impose any more than we already had, we tried to respectfully decline but they insisted we would be welcome at the festivities and should join them. 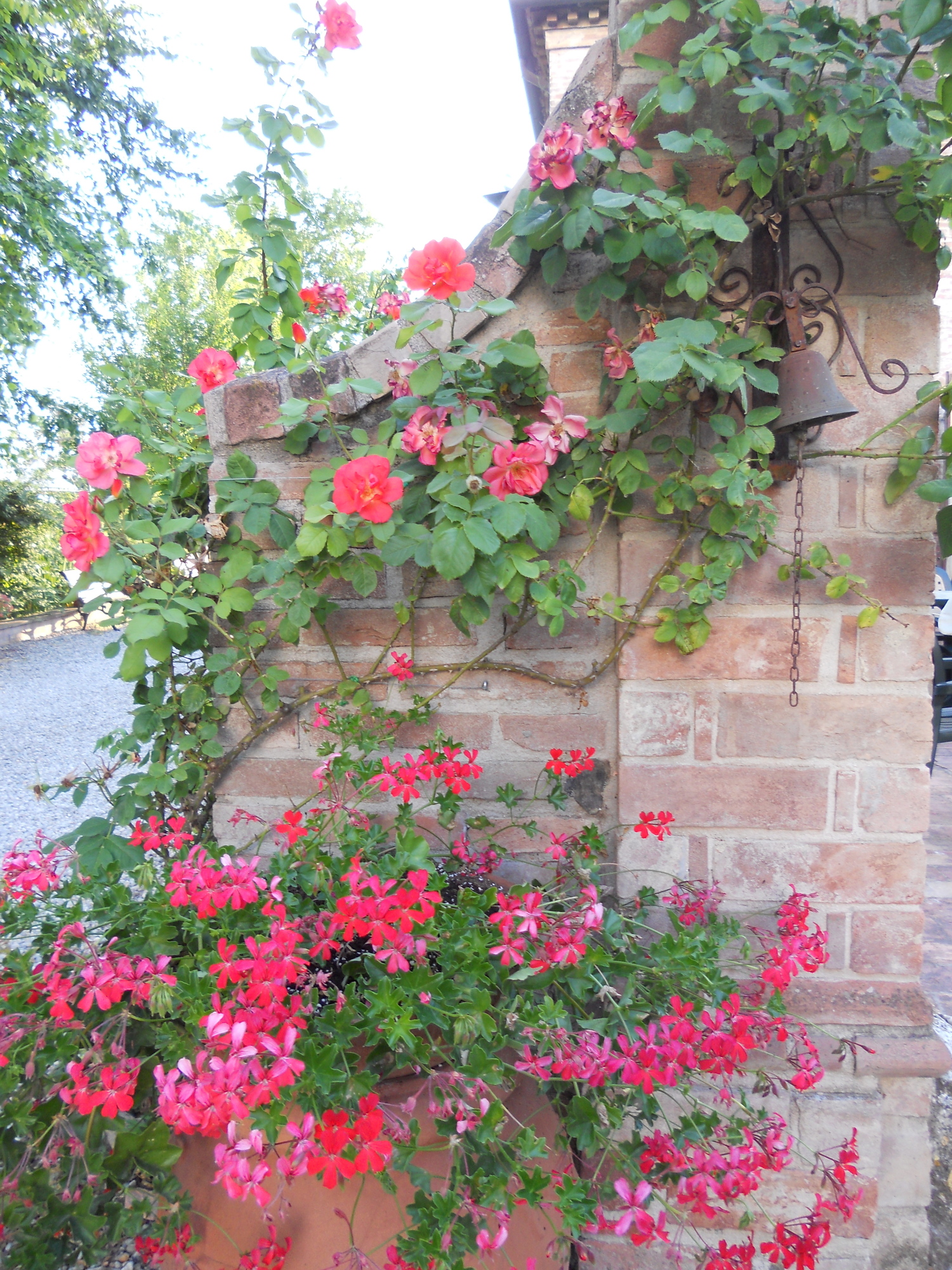 As concerned as I was for being a big, fat transportation idiot having to rely on their kindness for rides, I was totally excited for the chance to be a part of a big, Italian feast. Mappy, on the other hand, worried we would be crashing a party where we would feel awkward not knowing anyone and wouldn’t be able to make conversation with people because we didn’t speak the language. I reminded her we were in Italy to experience the culture in every way we could and what better way to do that than going to a contrada dinner during the week of Palio? As long as we attempted to speak Italian, I figured we would be fine. Besides, Laura and Luciano were insisting we go and an opportunity like that doesn’t come along every day. Mappy finally agreed and we accepted the invitation.

That evening’s ride into the city was with Laura and her fourteen year-old son, Marco, who spoke excellent English and tolerated all of our questions about being a teenager in Siena. Intelligent and charming like his parents, Laura beamed at her son’s ability to talk with us so fluently.

When we arrived at the contrada, Marco ran off with his friends and Mappy and I followed Laura up to the church. The cathedral in Valdimontone, Santa Maria dei Servi, is a large and formidable yet austere-looking structure. Valdimontone is located in the southeast corner of Siena and because of this, the cathedral has a tower that was used to watch for invaders coming across the land. 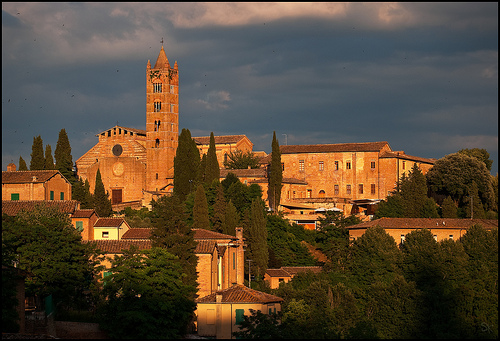 Long rows of tables covered in white tablecloths with enough seating for at least 200 lined the front lawn of the church. People mingled outside, in front of the church, and on the patio. Laura, of course, knew just about everybody and stopped often to greet friends with kisses on the cheek. The real action, though, took place inside at the church bar.

The church has a bar? Inside? As in part of the building? Yeah, I was pretty amazed at that, too.

And it wasn’t just a small table with some wine being poured into small cups. It was a full bar, like you’d see in a restaurant or a pub, complete with beer on tap, liquor bottles lining the wall, and a seeming endless collection of wine being served by bartenders. Laura ordered us a cocktail at the bar and though it was a bit too bitter for my tastes, sitting on the patio while waiting for dinner, watching the sunset over Siena, observing children play, and hearing the raucous sounds of cooks yelling and laughing with each other in the kitchen more than compensated. In fact, it was one of those moments when everything seems scarily close to perfect. 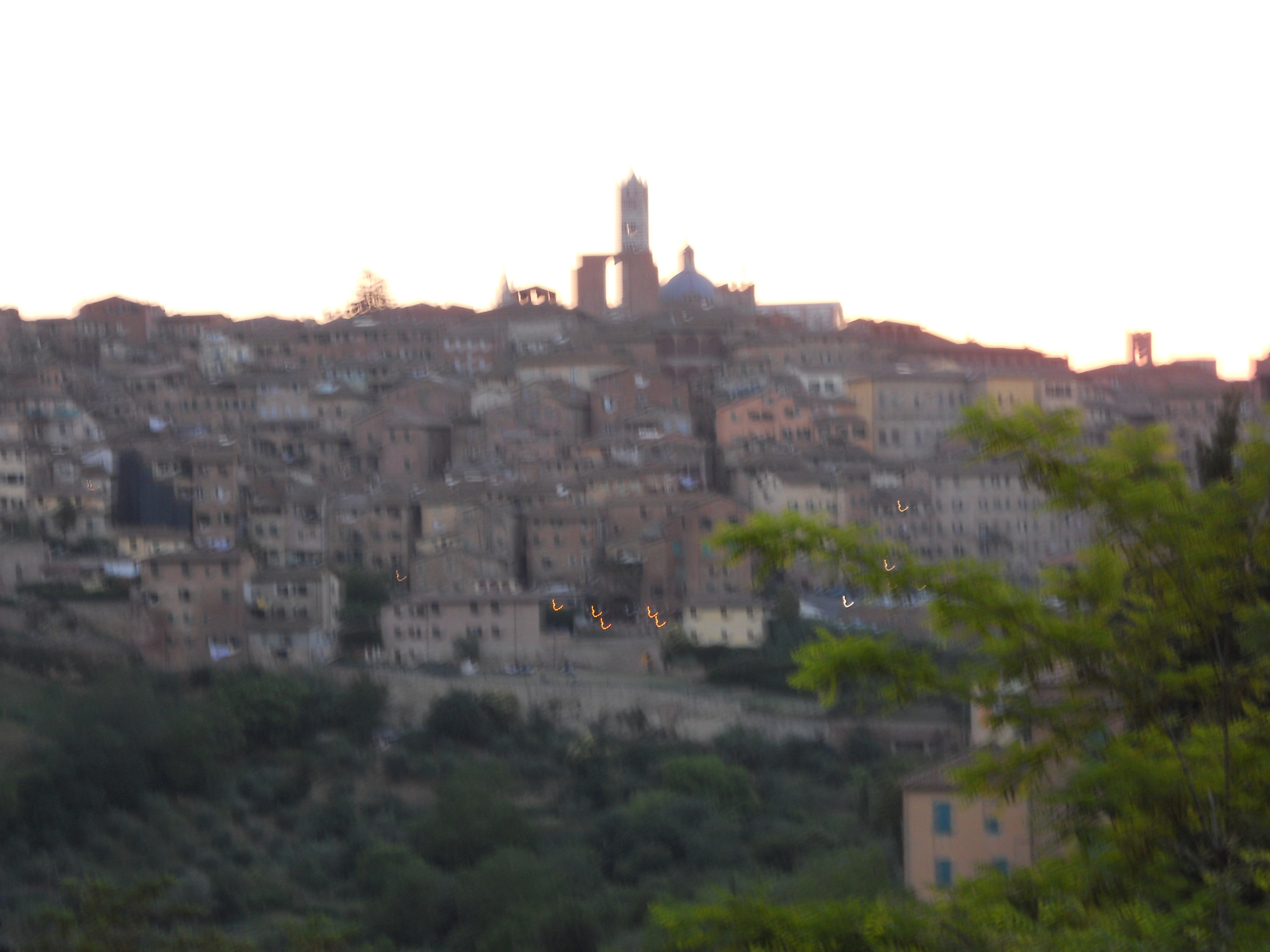 Blurry view of a glorious sunset over Siena. Note to self: learn to take better photos at dusk.

I wanted to capture all of this with my camera, but Mappy pointed out that since we were guests, we probably shouldn’t snap photos like a couple of tourists merely observing the festivities. Not wanting to offend anyone, I reluctantly agreed with Mappy and only took a couple of photos (a blurry sunset photo above) and one other (which you can see further down in the post).

At dinner, there were assigned seats and because we were last-minute guests, we weren’t seated next to Laura or Luciano. As the first course was passed down the long tables, Mappy and I smiled politely to the people on either side of us, trying to strike up conversations as best we could. At one point, a very sweet guy named Luca happened to sit down next to Mappy and because he spoke the most fluent English, we ended up talking to him most of the night. Not that the other people around us weren’t friendly, but it really is difficult to converse with a group of strangers who have all known each other for most of their lives when you don’t even speak the same language. Despite the language barrier, though, I felt very welcomed there.

The multi-course meal consisted of fruits, vegetables, breads, prosciutto, pasta, and dessert. All of it was delicious. Luca took on the role of interpreter as well as seeing to it that we got the best bottles of wine for our section of the table, thus affording us the chance to sample several different varieties. Before the serving of dessert, he also made sure we got a shot of the rum and of the espresso handed out to everyone. 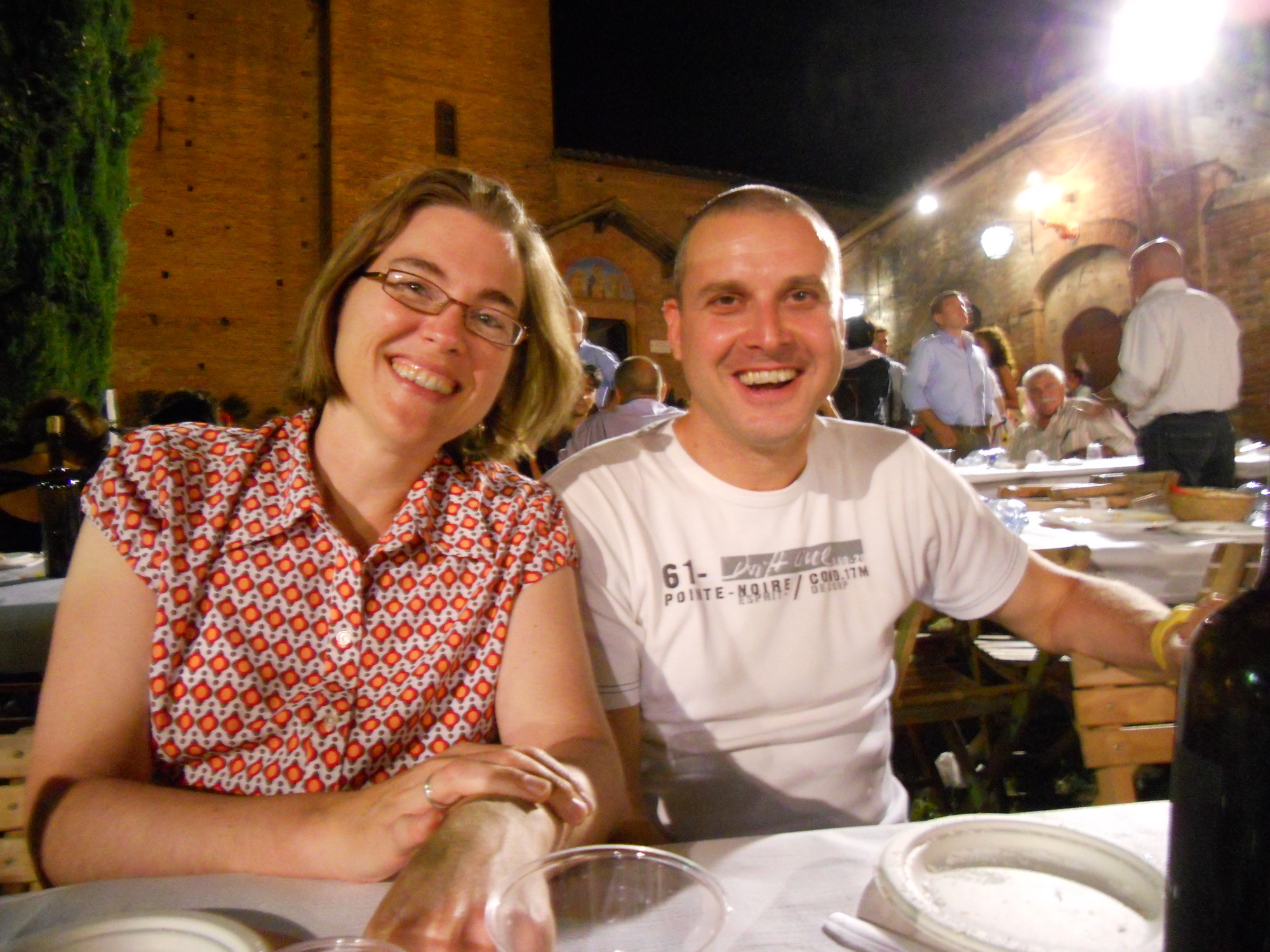 Mappy and Luca, our personal interpreter, sommelier, and rum/espresso wrangler

Luca also gave us some lessons in Italian throughout the meal. Of all the phrases and words he taught us, our favorite was the one we asked him for that would be most similar to the popular, snarky ‘whatever’ used frequently in the U.S. He said the closest Italian phrase to that is non c’e’ male (pronounced non chay MAH-lay, which translates to “it’s not bad”). It became our most used phrase for the rest of the trip even though we were pretty sure we weren’t using correctly most of the time. Train running late? Non c’e’ male! Restaurant crowded? Non c’e’ male! 80 year-old man hitting on you while his wife is nearby? Non c’e’ male! (More on that in a future post.) Using it made us feel just a teensy bit more Italian.

Because Laura and Luciano were going to stay at the church until the wee hours of the morning, we figured we would take a taxi back to the B & B when we had finished with dinner. And once again Laura and Luciano insisted they help us out in this way. They had arranged a ride for us at midnight back to Il Canto del Sole with Gianni, their gardener. Because we were having such a good time eating, drinking, talking and listening to the rowdy songs being sung, we weren’t paying attention to the time. With just ten minutes to spare, we ran from the church into the darkened city like a pair of inebriated Cinderellas to meet Gianni for our  ride back to the B & B.

Of course, the winding, dimly lit streets of Siena looked a lot different at night and we got turned around several times, having to ask a couple of Sienese women in Italian to point us in the right direction to the  Porta Romana. When we arrived, Gianni was as cool as a cucumber, leaning against the van having a smoke and not the least bit concerned we were ten minutes late. Gotta love the Italians and their flexibility with time, especially when it’s in your favor.

After profusely thanking Gianni for driving us, we let ourselves into the B & B, still wound up from the night’s fun. In the main lobby, we met an American family who had arrived later than expected only to find no one available at Il Canto to check them into their room. Feeling emboldened by my newly acquired Italian phrases, I took it upon myself to call Luciano (I had his phone number in my cell phone so we could call him when we’d arrived in Siena) to let him know he had guests waiting. Luciano said he would be there soon and thanked me for calling.

Mappy and I brought the tired family up to the loggia and kept them company until Luciano arrived. Once he had them settled in their room, Luciano invited us to share some of his homemade Prosecco out on the upper patio in the garden where we could sit under a canopy of stars on a perfect Italian summer night (my words, not his, though if he would have said it in Italian I’m sure it would have sounded much more poetic).

We chatted a while with Luciano and when we had finished our glasses of Prosecco, he walked us over to the edge of the darkened garden to show us the amazing light show being put on by the fireflies. Then, as we all said buonanotte, good night, he handed us the bottle of Prosecco to finish as we desired.

We were already smitten with Siena as well as our adorable B & B hosts, but now we were totally and completely head-over-heels in love. And I’m pretty sure, even a year later, that it wasn’t just the wine/rum/espresso/Prosecco bringing out the love. It was the best night in Italy so far.

In my next travel post, I’ll share how we spent our last day in Siena before heading to Orvieto in the Umbria region of Italy.

How about you, lovely readers? Have you ever been invited to a big, festive meal when traveling abroad? If so, when and where was it? What was it like? Would you have gone to the contrada dinner even though you didn’t know the language well and knew no one? Please take a load off and sit a while in the kasbah. It’s always great to hear from  you.

6 thoughts on “Siena, Part 2: Palio Dinner in the Contrada”

← Letters from Benedict: On the Olympics, Magic 8 Ball, & the Ace of Hearts

Letters from Benedict: On Freedom in the Kasbah→