← Letters from Benedict: On Maps, Photos, and the Trip Around the Sun Challenge

Cusack in the Kasbah→

On our second full day in Florence, Mappy and I had planned to climb the 463 steps to the top of the Duomo (dome) at the Basilica di Santa Maria Novella. (Click here to read about our first day in Florence.) We woke up early in order to get in the notoriously long line before it got too lengthy and wrapped around the massive basilica. 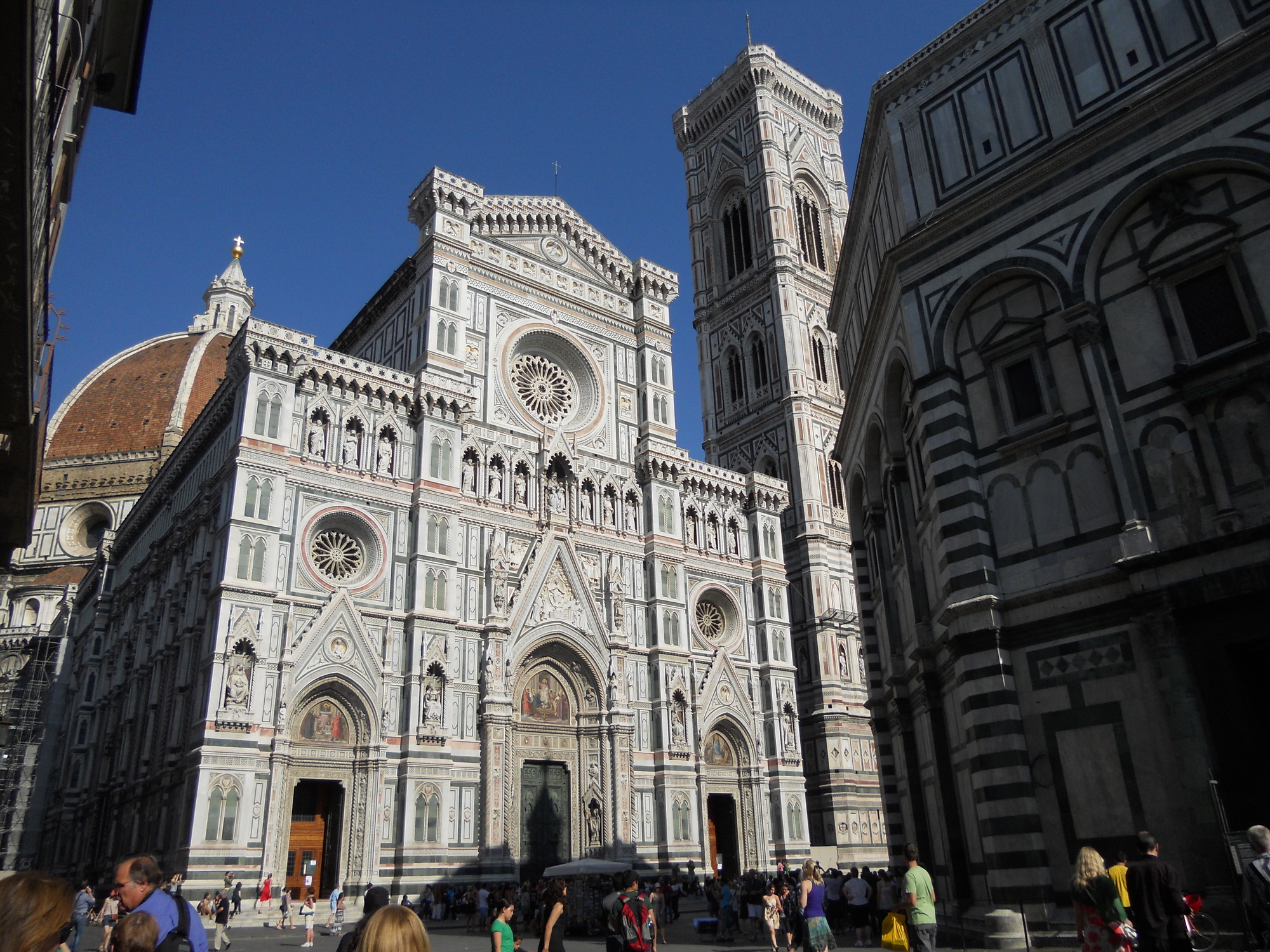 Our cappuccinos and pastries were consumed in what we came to learn was the swift Italian fashion and then we scampered across Piazza della Repubblica to the nearby Piazza del Duomo. Sure enough, a line had already started forming though it was only going down one side of the basilica. We stood in stationary line with the other tourists for several minutes before word spread to the back that the steps to the Duomo were closed because of the holiday in honor of San Giovanni, Patron Saint of Florence. The day was already quite warm so we took that to be a blessing in disguise for saving us from a sweaty hike to the top. Still, it would have been pretty awesome to see all of Florence from up there.

Luckily the Galleria dell’ Accademia was still open, a fact I knew to be true because I had also booked tickets for our entry before leaving the U.S. (just as I had done for entrance the day before to the Galleria degli Uffizi). Getting into the Accademia can be tricky in the busy summer months and just like at the Uffizi, the line can be so long that you might not get in at all on the day you want to go. Since our Duomo plans were thwarted, we decided to walk around Florence a while before having a leisurely lunch and then heading over to the Accademia at our reserved time.

The Galleria dell’ Accademia is much smaller than the Uffizi making it quite easy to see and enjoy all of its treasures in less than an hour. The major attraction at the Accademia is, of course, Michelangelo’s grand marble sculpture, David. Completed in 1504, David stands 17 feet (5 meters) tall and was originally intended for placement on the roof of the Duomo. (This is why his head and right hand are larger and seemingly disproportionate to the rest of his body – so he would appear proportional to viewers below.) 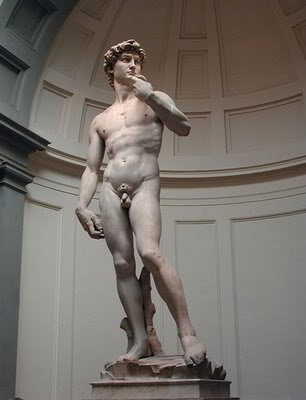 To think of one man sculpting this majestic figure out of one piece of marble over the course of three years was and still is astounding to me. It’s as magnificent as all of the guide books claim, which is why there are hoards of people standing at his base and gawking up at his finely sculpted shape. If you are patient (and why wouldn’t you be – you’re in Italy!), you can eventually make your way to the base and get an up close and personal view of him. No photographs are allowed, though that didn’t stop people from trying and subsequently getting yelled at in Italian.

It was mid-afternoon by now and Mappy and I chose to go to the market and create our own dinner to eat at our B & B. On our way back from the market with our dinner makings, we walked past the Palazzo Vecchio (Old Palace) – Florence’s town hall – where the copy of the David statue stands in the Piazza della Signoria. A large crowd had formed in the piazza and being curious travelers, we decided to see what was going on. 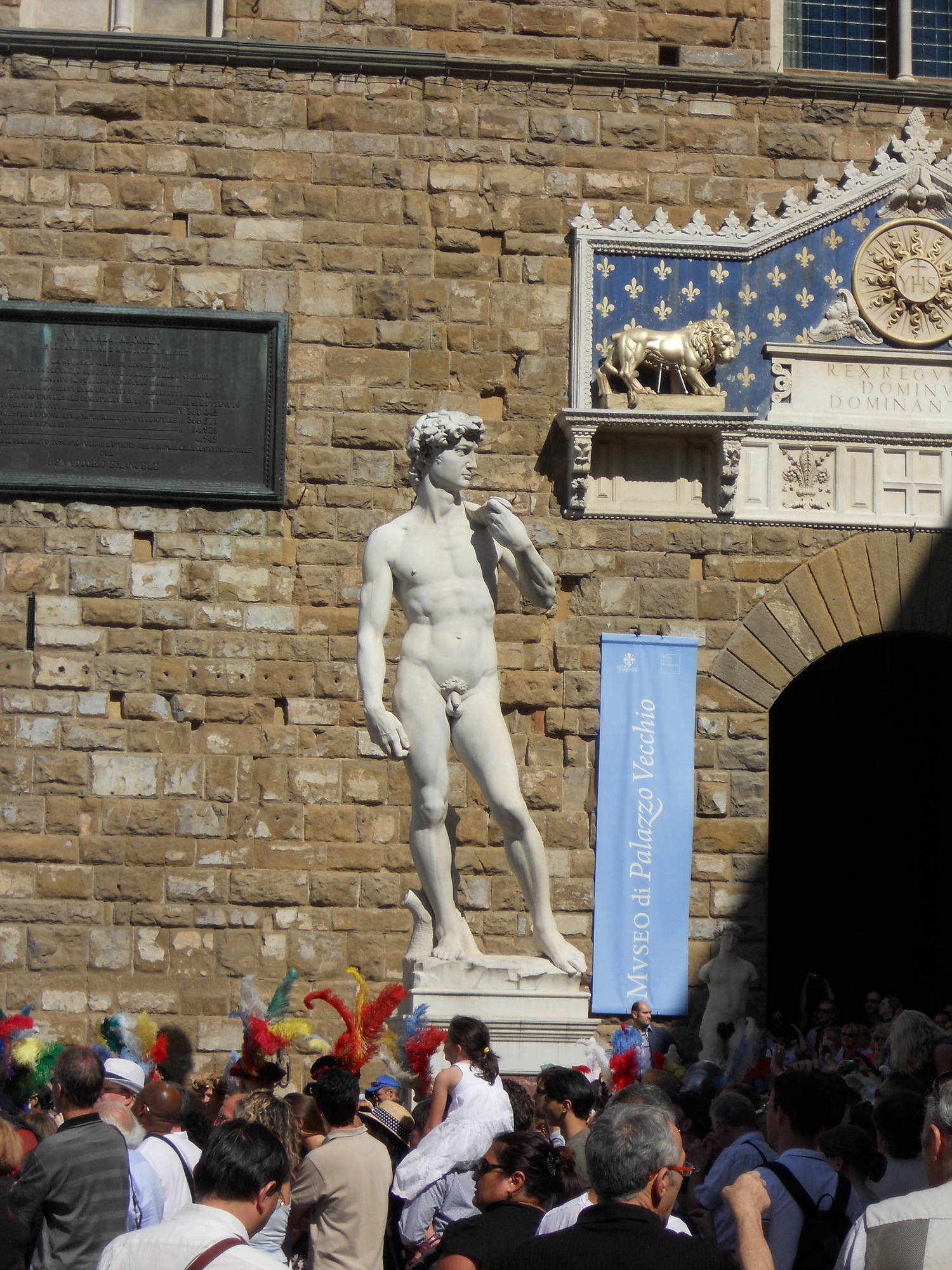 Copy of David in the piazza

We stood among the Florentines and other tourists trying to discern from bits of Italian we understood why the crowd had formed. Eventually, it became clear that a parade was about to begin in honor of San Giovanni Day and the calcio (soccer) matches that were to take place that evening. It is said that calcio is THE sport in Italy and allegiances to a certain squadra del cuore (favorite team) are created at a very young age. The Italians are very passionate about calcio and it shows in the local discussions (or arguments as the case may be) about a favorite team and in the media. 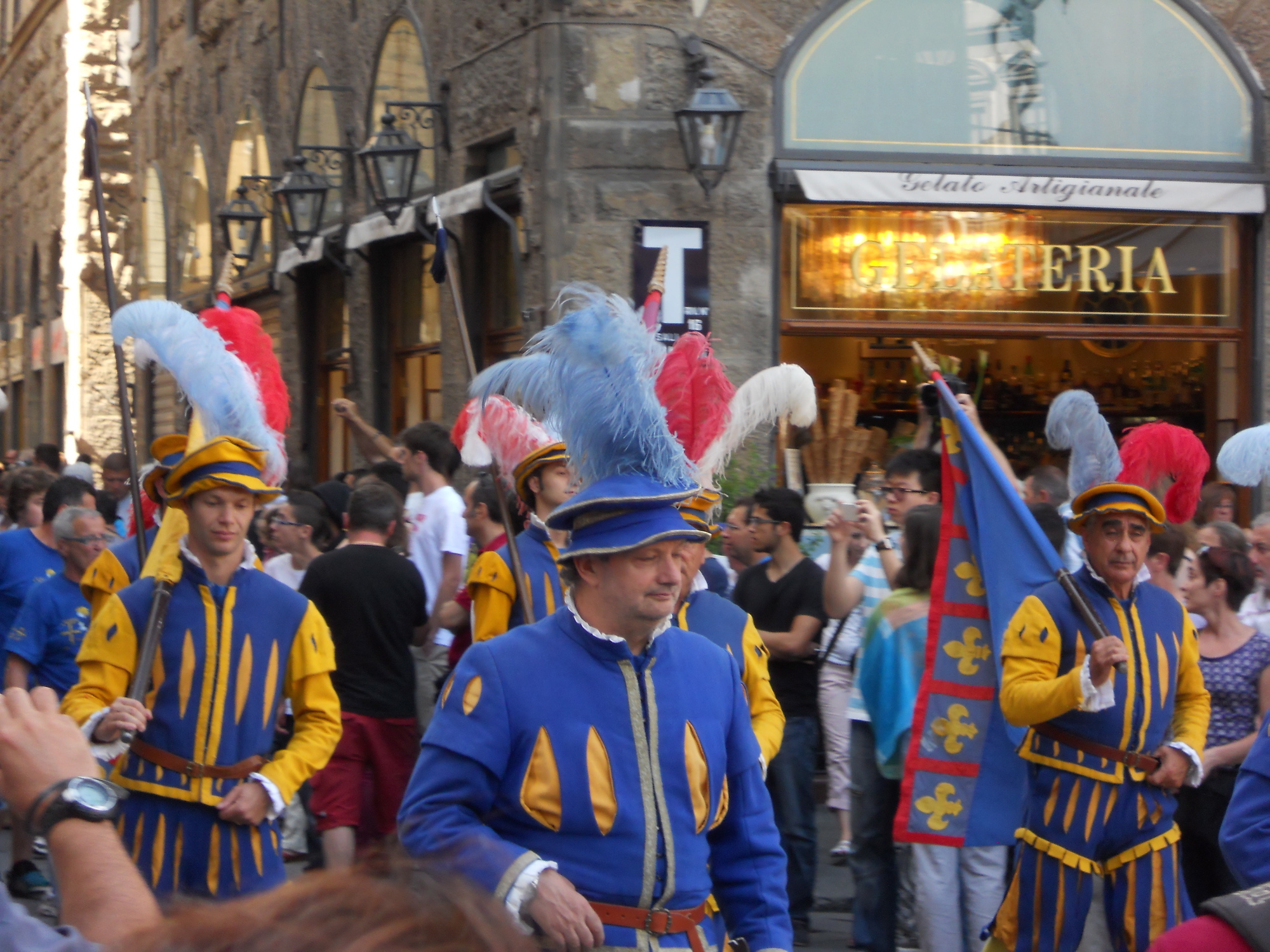 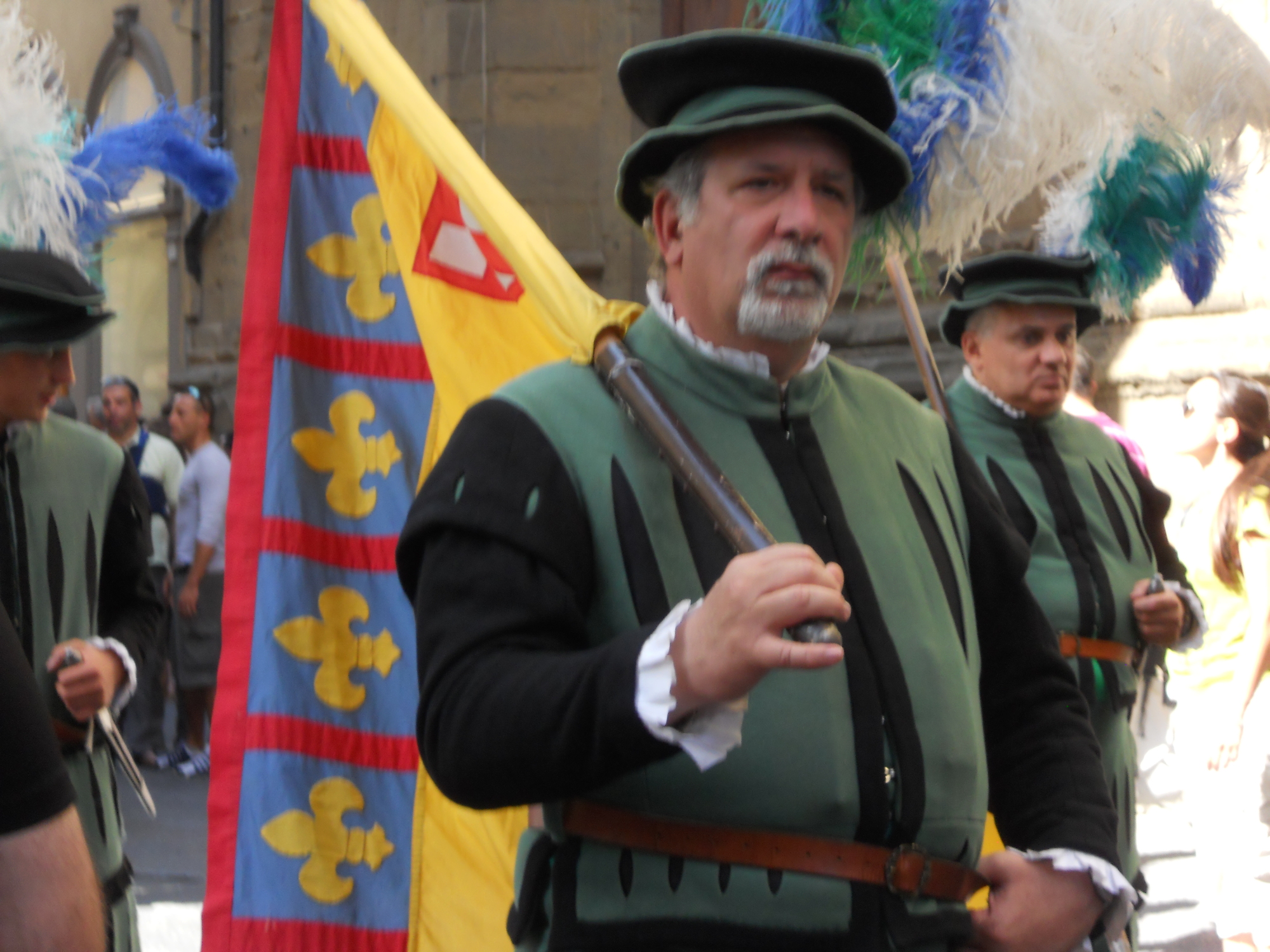 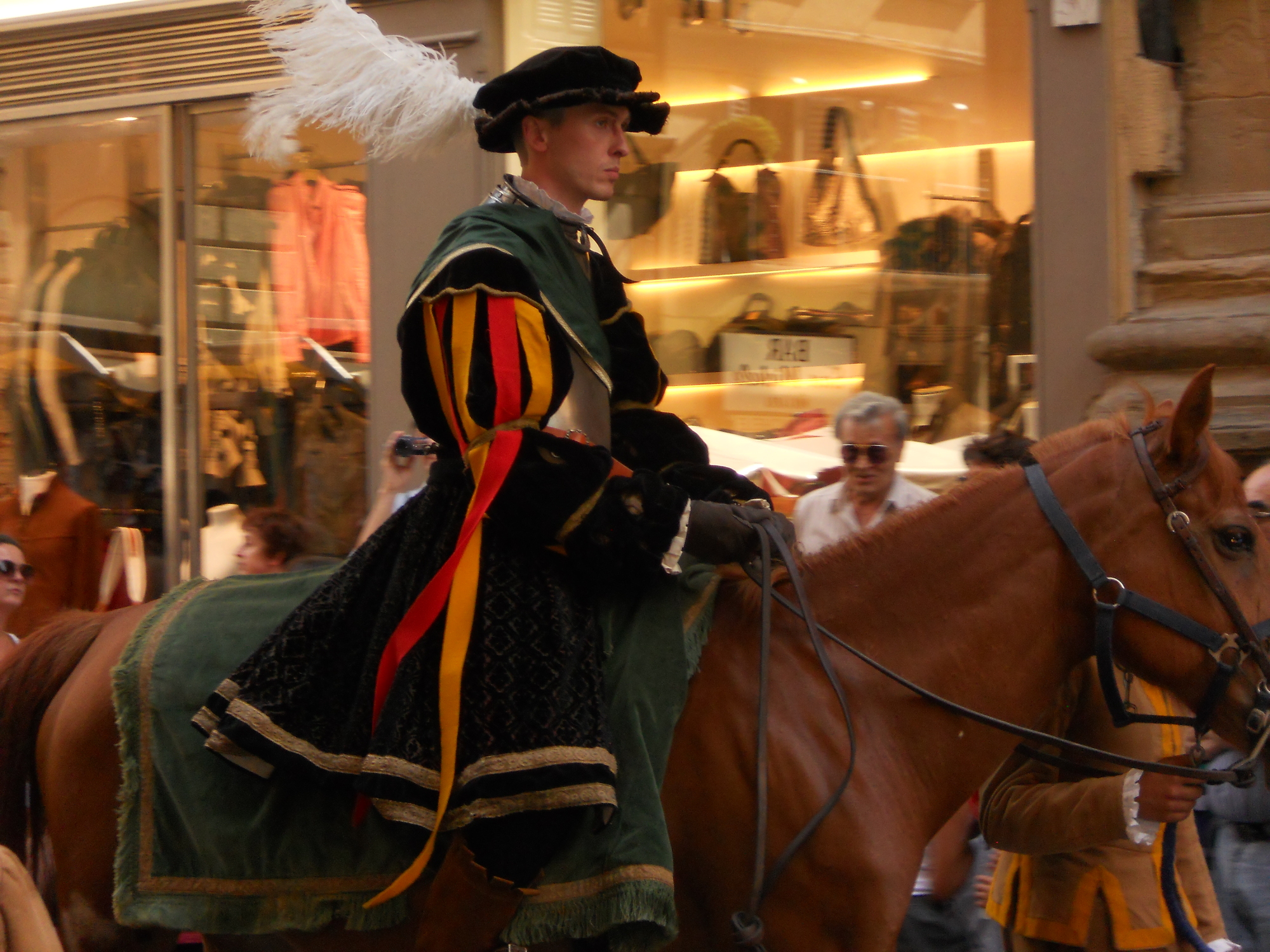 As I mentioned in previous posts, I love it when an opportunity presents itself to enjoy something you had not planned for or had any idea was going to happen. Serendipity. Gotta love it.

Our dinner of deliciously fresh veggies, bread, olives and cheeses at the B & B gave us a little break from navigating restaurants and crowds. It also gave us a chance to buy our own bottle of Prosecco (Italian sparkling wine), which was crisp and refreshing after a long day under the Tuscan sun. (Had to get that in there at some point…) 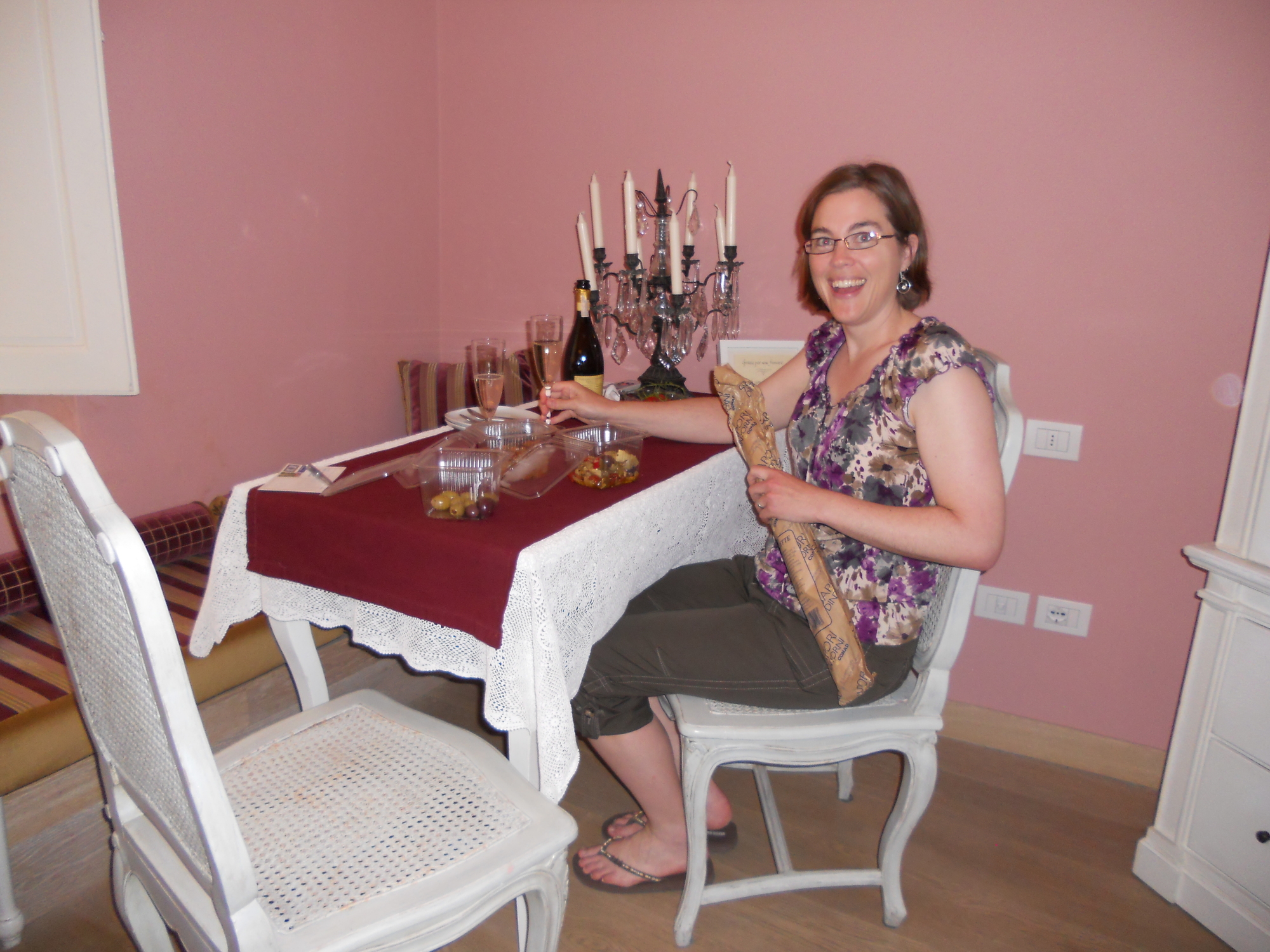 Mappy and our humble yet tasty dinner

It was during this dinner that I came to the important conclusion that despite my well-documented German (on my dad’s side) and northern European (a mix of sorts on my mom’s side) ancestry, I had to be descended from people of Mediterranean cultures. People like the Italians and the Greeks. Prosecco may or may not have contributed to this conclusion, though I stand by it as I type this. Here is small segment from our conversation that evening to better understand my conclusive evidence:

Me: My people must be Mediterranean.

Me: Yeah, my people. You know, my ancestors.

Mappy: I thought your people were from the north, the lands of fair-skinned, blue-eyed people. Like yourself. You have looked in a mirror lately, right?

Me: Doesn’t matter. My point is my original people must have been from the Mediterranean region. You know, like from the beginning of time. I’m sure of it.

Mappy: And how do you know this?

Me: a) I like hot weather and everyone knows it is hot in the Mediterranean region. b) I love olives, olive oil, tomatoes, basil and mozzarella and feta cheeses. c) I also love wine. Good wine. Like this Prosecco.

Mappy: You think your people are from the Mediterranean region because you like hot weather and olives?

Me: I know, it’s kinda surreal how obvious it is.

Mappy: That’s one way to look at it.

Mappy eventually came around to seeing my point of view, though I think it took most of the trip to convince her. Or maybe she just got sick of hearing me say things like “my people love this sort of thing” or “my people would be glad I’m seeing this site”. Either way, she eventually agreed with me. Because that’s what good friends do.

After dinner, we walked down to the Ponte Vecchio (Old Bridge) to gather with the other tourists and Florentines to watch the grand firework display over the Arno River that evening. The Ponte Vecchio was originally built in 1345 and was later added to in 1565 when the Grand Duke of Florence, Cosimo I de’ Medici (pronounced MEH-dee-chee, in case you want to sound Italian), had the Vasari Corridor built, a passageway that goes above the shops and enabled Florence’s ruling Medici family to go from the town hall to the Palazzo Pitti, their grand palace across the Arno River without having to mingle with the common folk and smelly butchers on the bridge. Local butchers inhabited the shops that line both sides of the Ponte Vecchio from 1442 to 1593 when the Medici Grand Dukes decided they’d had enough of the smelly and unsightly dead animals lining the bridge and prohibited them from selling there because it was bringing down the prestige of the city. Several gold merchants quickly filled the vacant shops and since then nearly all of the shops that line the Ponte Vecchio sell gold and fine jewelry.

Perfectly framed by the arches of the Ponte Vecchio, the hour-long fireworks show was glorious to watch. To top it off, at the end of the show, paper lanterns were lit and released over the river. A truly magical end to our time in Florence.

There are tons more things to see and do in Florence, much more than we could fit into our short time there. While Mappy wasn’t so enamored with the city because of the crowds, traffic, and noise, I really enjoyed my time there and would certainly return some day to see some of the things I missed. It is a city full of gorgeous art at every turn, whether it is in the famous paintings and sculptures in the museums or adorning the ornate architecture of the buildings. You can’t throw a slice of pizza and not hit something amazing or beautiful. (Though really, you shouldn’t be throwing pizza. That would be a food travesty, not to mention a waste of perfectly good pizza.)

In my next travel-related post, I’ll be sharing where we went next on our Italian adventure: the Cinque Terre, the five charming villages clinging to the western coast of Italy. Until then, fine readers, tell me your thoughts or ask me your questions about Florence or Italy in general. I’d love to hear from you!

← Letters from Benedict: On Maps, Photos, and the Trip Around the Sun Challenge

Cusack in the Kasbah→