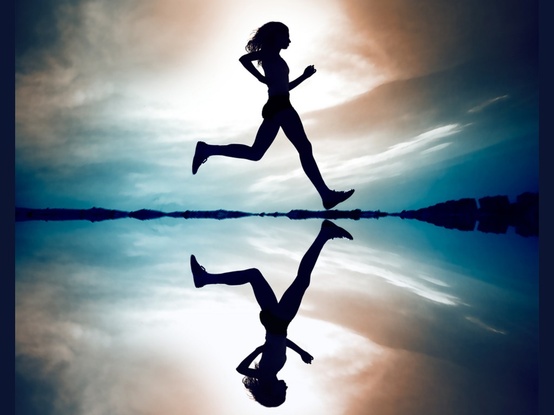 I have a confession to make:

I am not a runner.

So what, right? Big deal. Who cares?

Typically, that statement wouldn’t be such a thing to confess unless you live where I live, in a city that has been dubbed Track Town USA. Then it can be quite the big deal.

You see, running is the life blood of this city. The numerous running trails are like arteries and veins that sustain its inhabitants. Runners of all ages are seen at all times of day running around town, down the street, and on the running trails and tracks. You can find runners outside pounding out the miles in all kinds of weather. If you gathered up a random handful of citizens here, I guarantee at least half of them will be training for or will have recently finished running a 5K race, 10K race, a marathon or a triathlon.

My city is also known for being the place where the first Nike running shoe was created in the 1960’s by then University of Oregon track coach, Bill Bowerman. He created the now famous waffle iron tread pattern – the same pattern that’s still seen on shoes today – with an actual waffle iron. 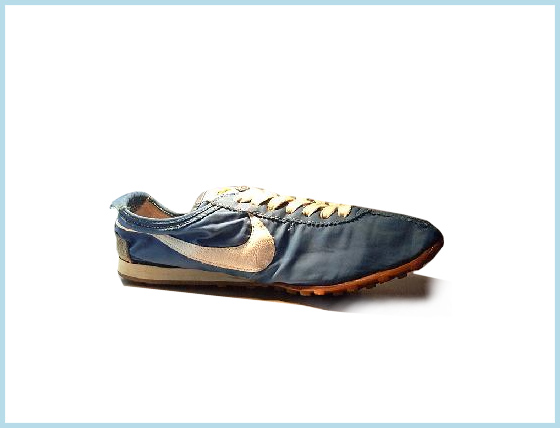 Nike CEO Phil Knight has donated tons of money into the University of Oregon’s athletic programs, more than any other donor I’m aware of. He’s been integral in the building of the new baseball stadium (PK Park), the new basketball stadium (Matthew Knight Arena – named for his son), and the Knight Library (the main library on campus). The U of O football team has a different Nike uniform for every game. (A bit excessive? Yes, but when your biggest donor gives them to you, what are you gonna do?) 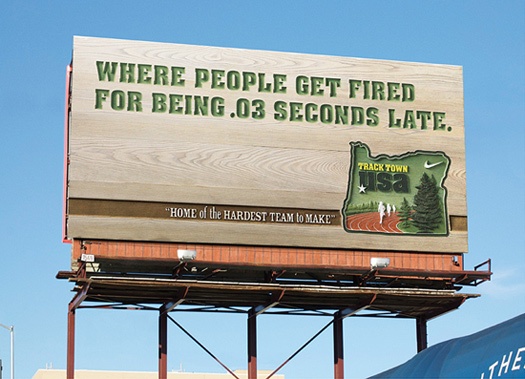 In case you thought I was exaggerating, this is an actual billboard here. Source: google.com via Ashley on Pinterest

It’s like the whole city is part of some big running club and I’m left out.

Now here’s the pathetic thing about all of this:

I want to be runner.

And not just a person who occasionally runs or someone who jogs a bit then walks the rest of the way. I want to run like the runners I see all around me: smooth as glass, heads held high, breathing calm and controlled as they go into their second and third miles. I want to be in the club. I want to give a knowing nod at the other runners when they glide past me on the running trail.

And in order to do that I have to, you know, start running. Small detail, I know, but a seemingly pertinent one at that.

In the years since I’ve been a resident of Track Town USA, I’ve tried to become a runner numerous times. I’ve bought the shoes and the clothes. I’ve gone to the running trails and the tracks. I’ve read a little on technique and breathing. And during each attempt at becoming a true runner, I feel like someone has stabbed me in the side with a blunt object as I gasp to get enough air into my burning lungs. I end up leaving the trail feeling dejected and worried that one of the other runners will trip over the part of my lung I hacked up somewhere back by the 800 meter marker.

So why I am bringing up all of this now? Because running mania is coming to my city.

From June 21st through July 1st, my city will host the US Olympic Track and Field Trials. Running and all things track-related will reach fever pitch here during those ten days. 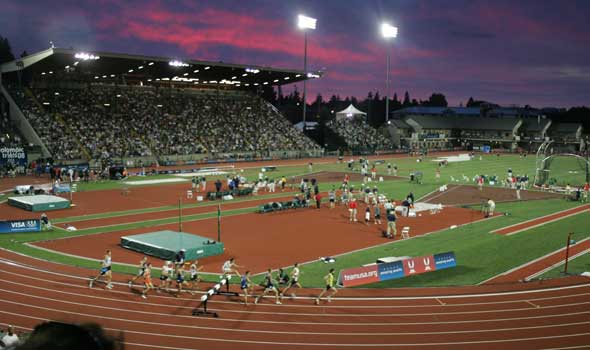 In all fairness, the Olympic trials are quite fascinating to watch. When my city hosted it four years ago, I went down to Hayward Field and braved the crowds to catch some of the action. You haven’t seen running until you witness the Olympic hopefuls gliding around the track like they are out for a Sunday stroll. Truly amazing.

With the Olympic trials starting, I’ve been inspired to try the running thing again. I vowed this time to take it slowly (I’m an impatient wannabe runner), building up to a respectable distance in so that I can own the title of ‘runner’. I want to keep my lungs inside my body where they belong. I want to get the metaphorical knife out of my rib cage. I want to glide alongside the other runners.

Last week I gave it another go. I gave up going to the gym one evening even though my primary motivator for going five nights a week (besides feeling good and getting in shape, of course) is the fact that I get to watch Vampire Diaries via Netflix while working out. I’ll shamelessly admit that whenever I feel a bit lazy about exercising, all I have to do is remind myself I that I can watch sexy, shirtless vampires for the next 45 minutes and I’m dressed and out the door before you can say Damon Salvatore. 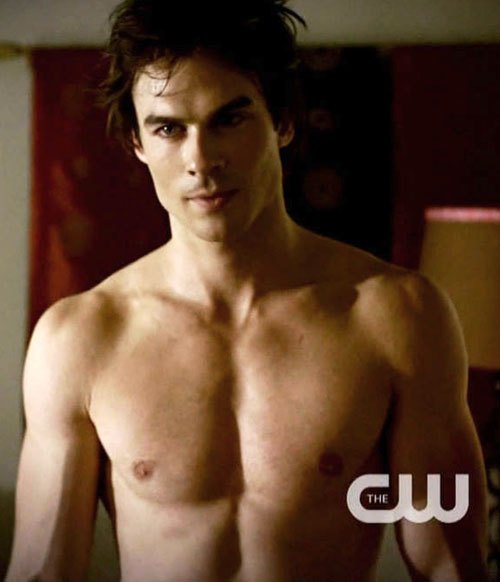 I came to terms with a vampire-less workout and laced up my big girl shoes. I walked over to the running trail paved with the forgiving bark-o-mulch and the handy meter markers to show you how far you have gone. 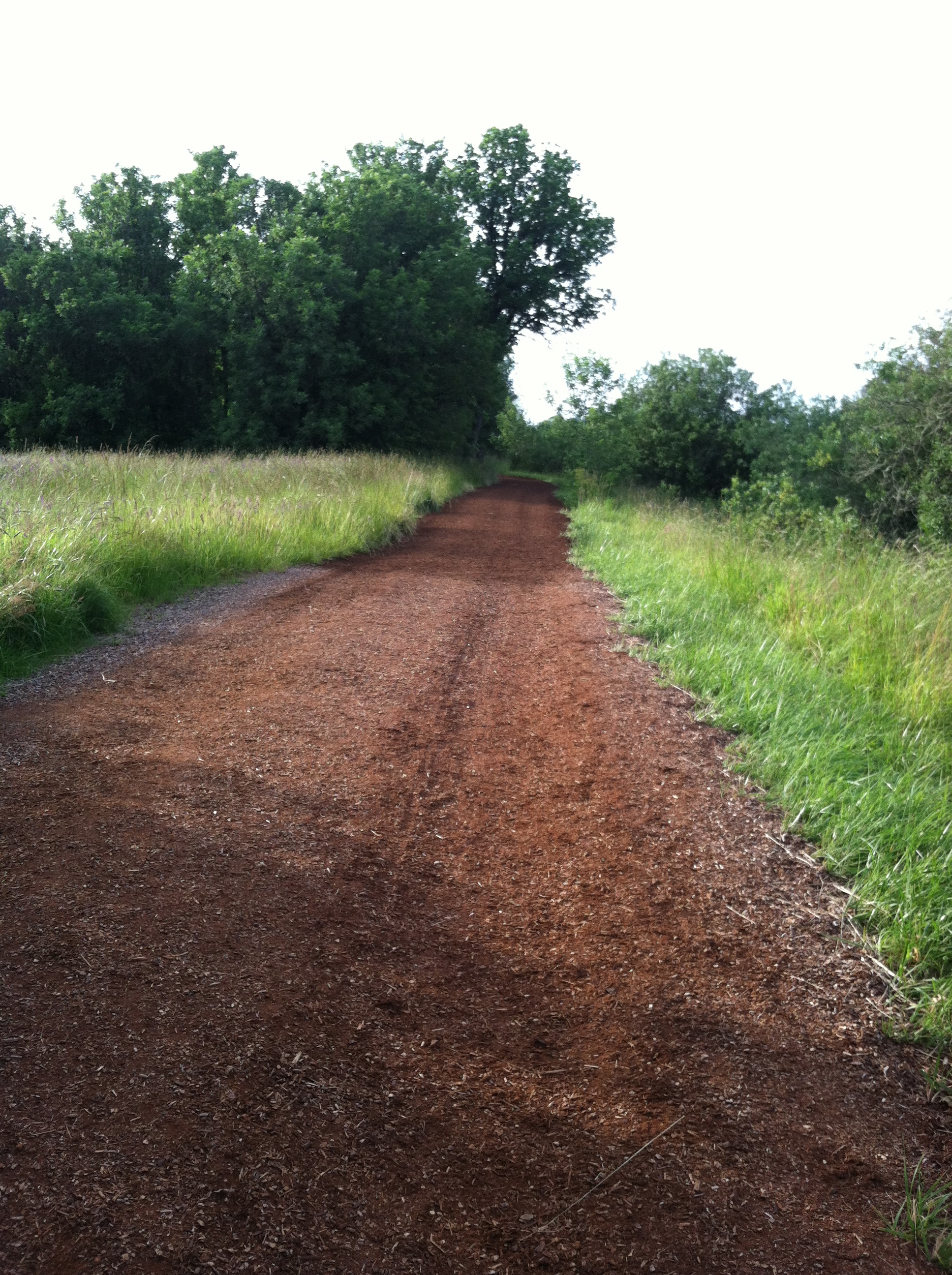 Such a long stretch ahead…

After a brief warm up, I worked up to what I thought was a respectable running pace. That is, until the real runners flew past me in a blur. But I ignored the twinge of doubt in my head telling me this wasn’t such a good idea. I’ll call that voice Skeptical Tami (ST). The other voice (you all have more than one in your head, right?), Positive Encouraging Tami (PET), chimed in with her own two cents:

PET: Don’t listen to that tart. You can do this. Keep up the pace. Don’t you mind the other runners. You’re a beginner right now.

ST: Whatever. (Her usual reply.)

I swiftly ran past the 100 meter and 200 meter markers and felt pretty good. Breathing was steady and all of the workouts at the gym seemed to have prepared my legs for this. No blunt objects stuck in my side yet. No burning in my lungs. 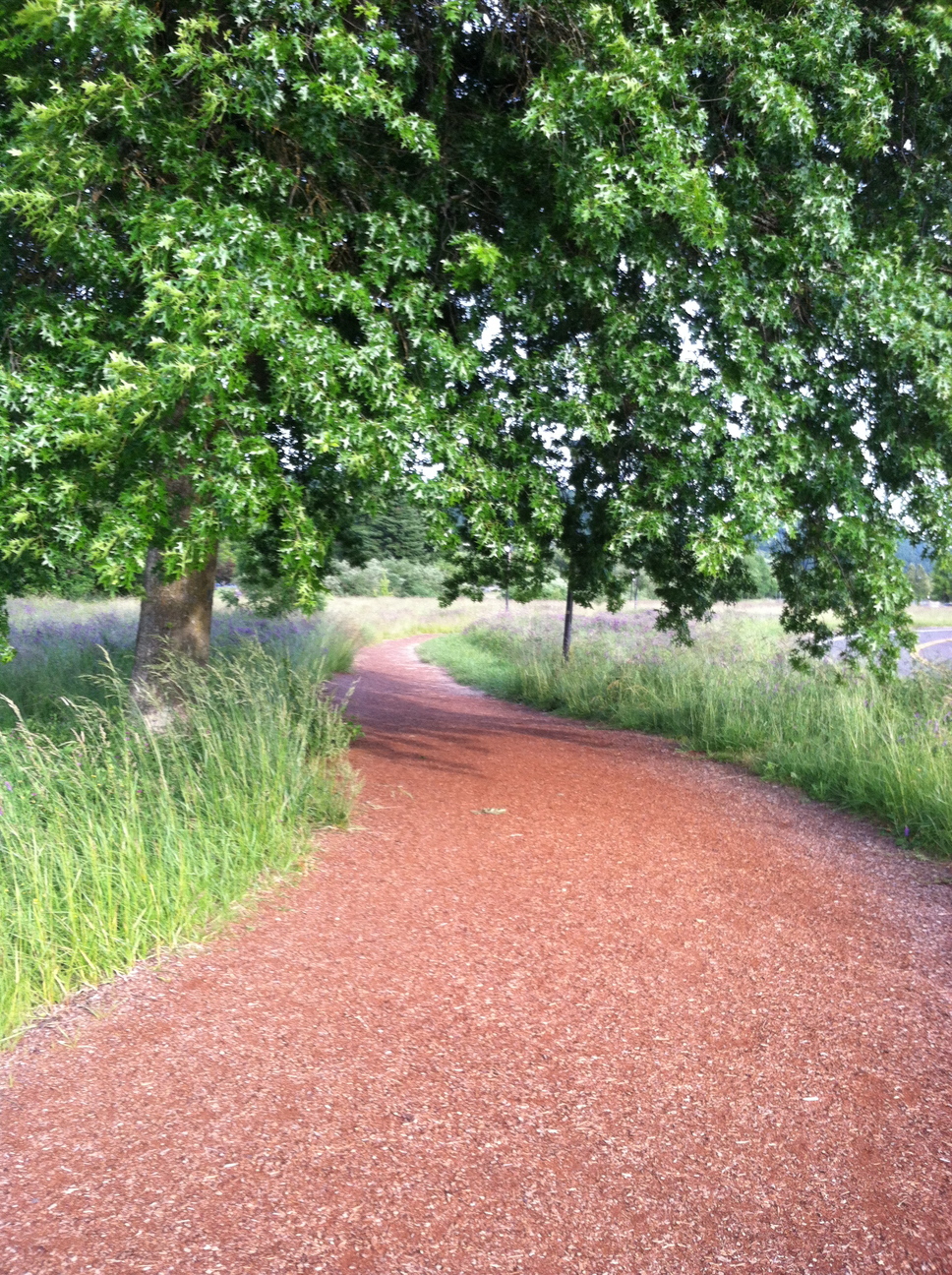 I congratulated myself for essentially for running what would have been one full lap around a track, a whole 1/4 mile for you metric system phobics out there.

And then the pain in my side started. A dull ache at first and easy enough to ignore. But then my lungs began their fiery revolt. The peanut gallery in my head had some thoughts to share on the subject:

ST: I don’t want to be catty, but I have to just say it: Told ya so. You could be in the air-conditioned gym watching sexy, shirtless vampires instead of running around this dusty trail.

PET: Ignore her. Keep your breathing even and steady. You can do this.

Still, I pressed on.

The cramp in my side persisted and my breathing became more like that of the wheezing variety seen in chain-smoking asthmatics.

But I kept running. 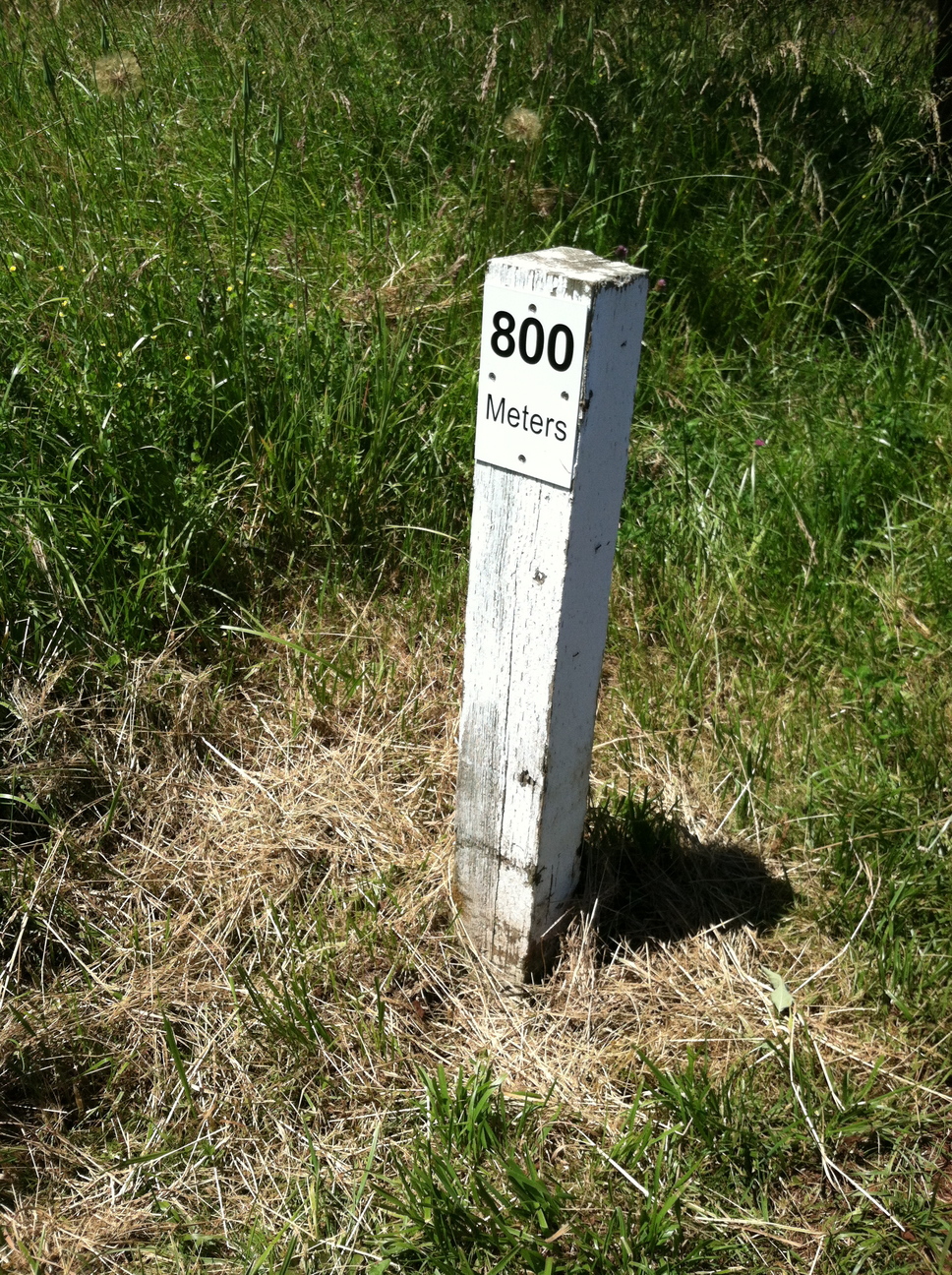 I gave myself a mental high-five for running without stopping for a half mile even though I wanted to stop and look for the piece of my lung I left there the last time I tried this.

My side felt as though a shiv had been driven through several internal organs by now. My memory is hazy, but I think the voices in my head were saying this:

ST: The Salvatore brothers would not want you to suffer this way.

ST: And your point is?

ST: I can see those sculpted pecs and abs clear as day on the screen when we’re at the gym. Trust me. They’re real.

I cursed the stupid sexy, shirtless vampires for not preparing me better for this. I think this was kept in my head, but I can’t be sure due to lack of oxygen.

And while I was lambasting the vampires and their sexy, shirtless ways, something miraculous happened: the 1000 meter marker appeared up ahead, totally within reach of my winded, red-faced, sweaty grasp. 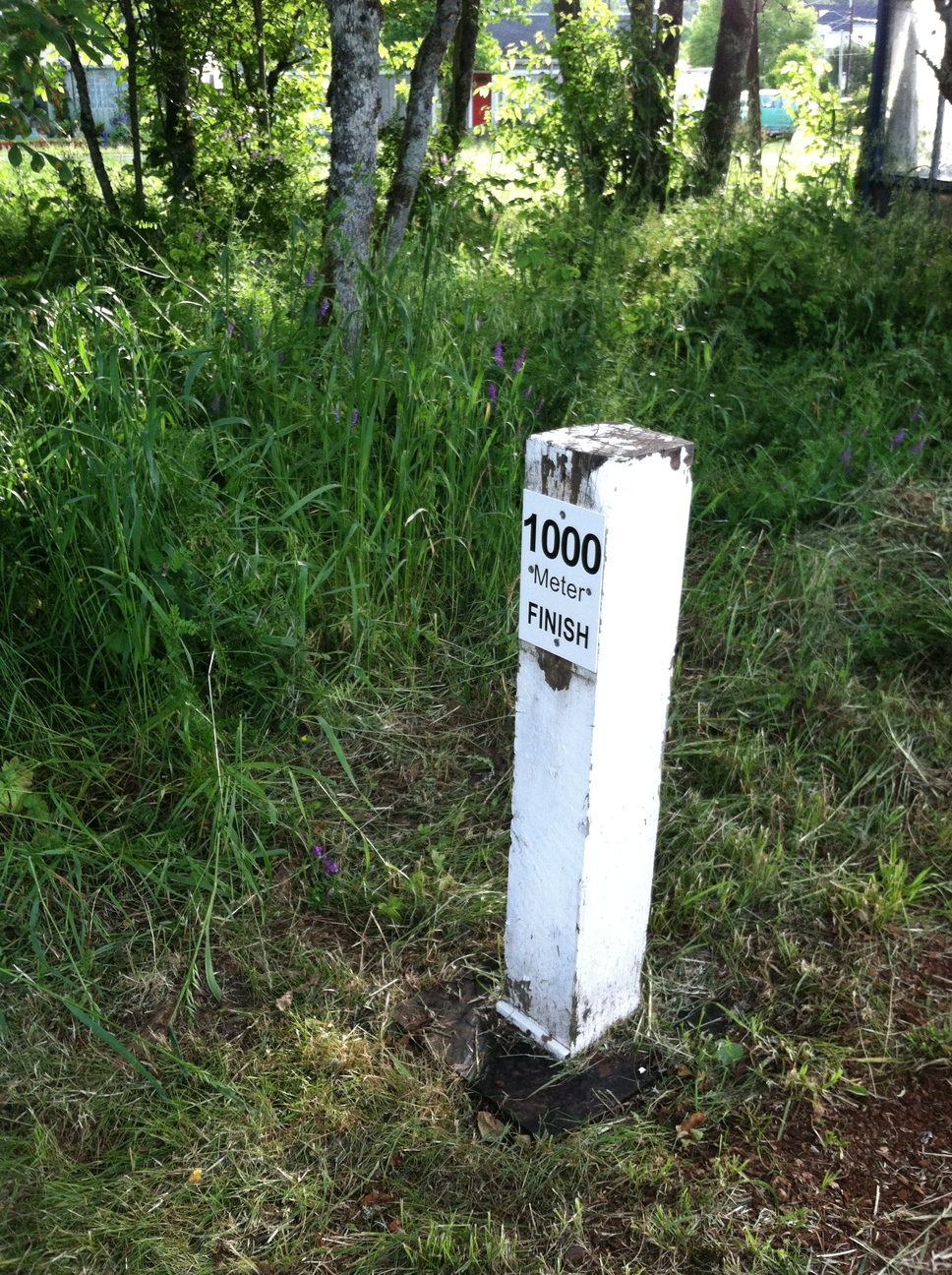 I had done it: one full lap around the trail without stopping.

Then I slowed to a walk while I still had possession of all internal organs.

Once I could breathe without feeling like my lungs were on fire, I could hear PET’s tiny voice coming through: Hey, not too shabby for your first time out on the trail. 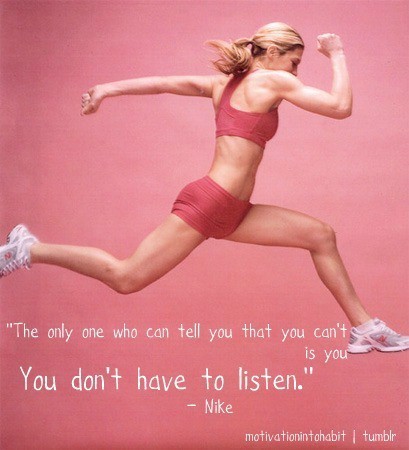 Good advice for pretty much everything in life, don’t you think? Source: google.com via Dana on Pinterest

Since then I’ve gone running four more times and have pushed myself up to a full mile. My goal by the end of summer? A respectable three miles.

I’ll take these small, one-mile victories for now and continue to reward myself with an episode of sexy, shirtless vampires when I get home from the running trail. I know I won’t ever get to the gazelle-like swiftness of the Olympians who fly around the track at Hayward Field. But perhaps someday I will be able to go to the running trail, give a knowing nod to the other runners and proclaim, “Yeah, I’m a runner, too.”

How about you, fabulous readers? Do you have any fitness goals? How are you doing in your quest to reach them? What motivates you? Any words of advice for me? Any plans to watch the Olympic trials or the Olympics? If you’re going to London to watch them in person, can I stow away in your suitcase? Am I crazy for wanting to be a runner? (Wait, don’t answer that last one…)

30 thoughts on “Sexy, Shirtless Vampires Will Not Prepare You for the Olympics”