← Dear Benedict: On the Gifts Frankenstein Gave Me 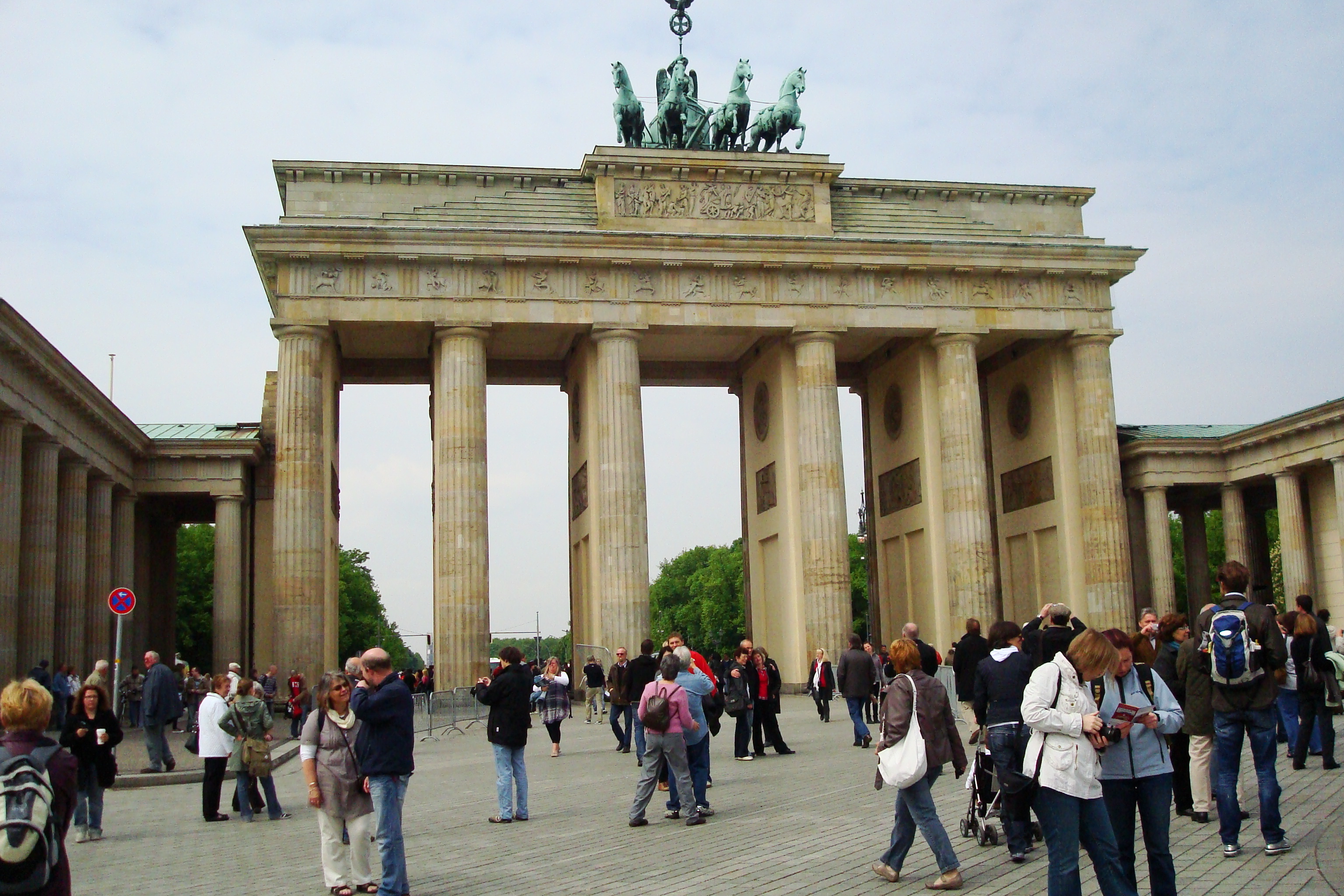 Like Paris (which you can read about in this previous post), I’ll admit I had a lot of preconceived notions about Berlin before travelling there though they weren’t of the idyllic, romantic variety. Most of what I knew about Berlin stemmed from history lessons in school and from my college German classes and most of the information given was centered around World War II, Hitler, Nazis, and the Berlin Wall.

So when my friend, Anne, offered to show us around Berlin, I jumped at the chance to see the city through my own eyes. I was very curious about this city that has seen so much turmoil and change over the last century.

We took an early flight from Frankfurt and arrived in the city just as the morning commuters were making their way to work. Emerging from the subway into the grayness of the day, I noticed that everywhere you looked you could see reminders of the ravages of WWII. No place in the city shows this more than the Holocaust Memorial or Denkmal für die ermordeten Juden Europas (the Memorial to the Murdered Jews of Europe). 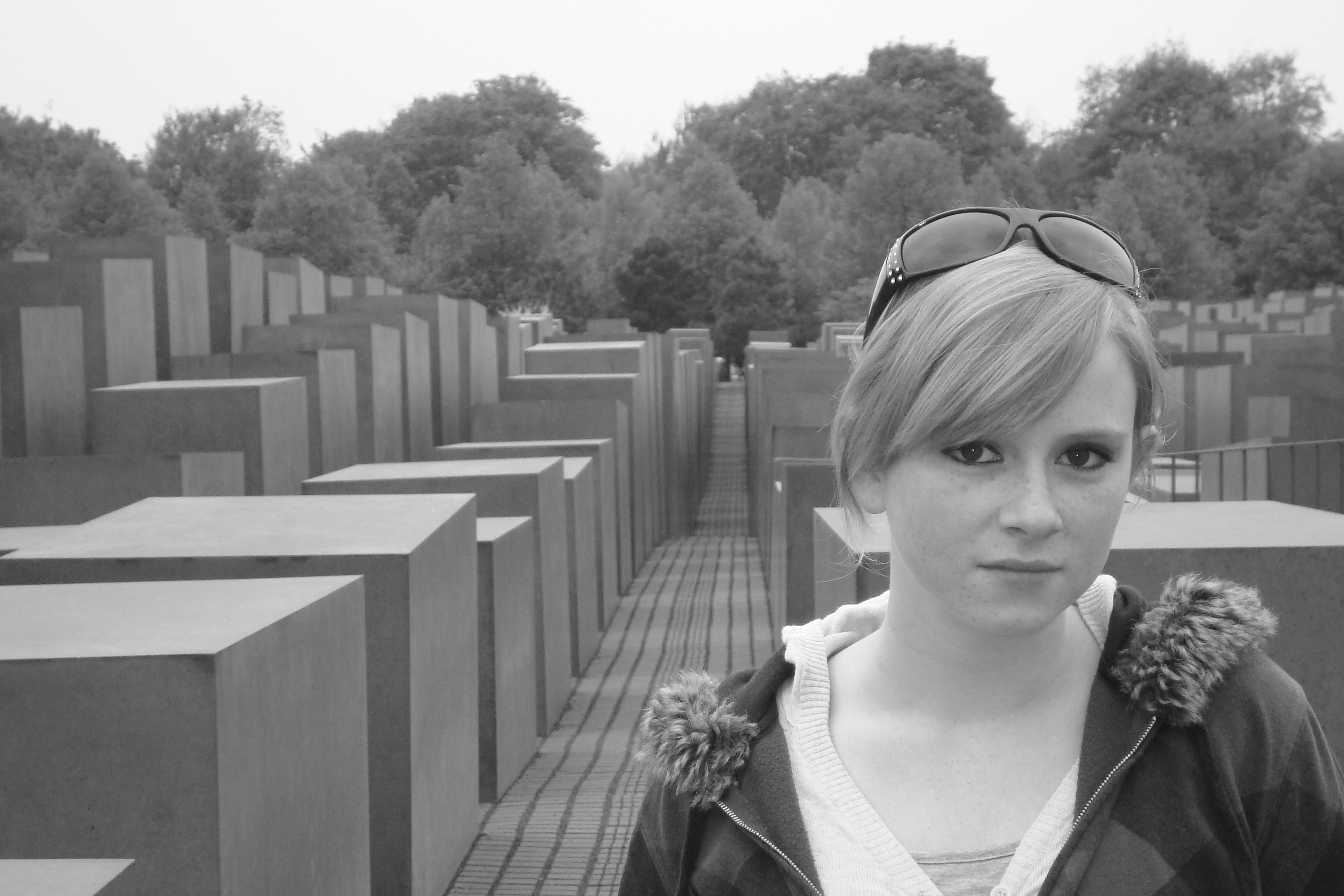 The memorial is comprised of 2711 concrete slabs or stelae ranging in size and shape from a few inches high to heights that tower over you. They are arranged in a grid pattern over the 4.7 acres of prime real estate in the center of the city. The designer of the memorial, U.S. architect Peter Eisenman, said he hoped to “create a feeling of groundlessness and instability; a sense of disorientation” with the unmarked concrete stelae and undulating pathways. Walking through the memorial, you are certainly struck by the disorienting way the paths and stelae interact. Overall, it’s a very somber, sobering experience. 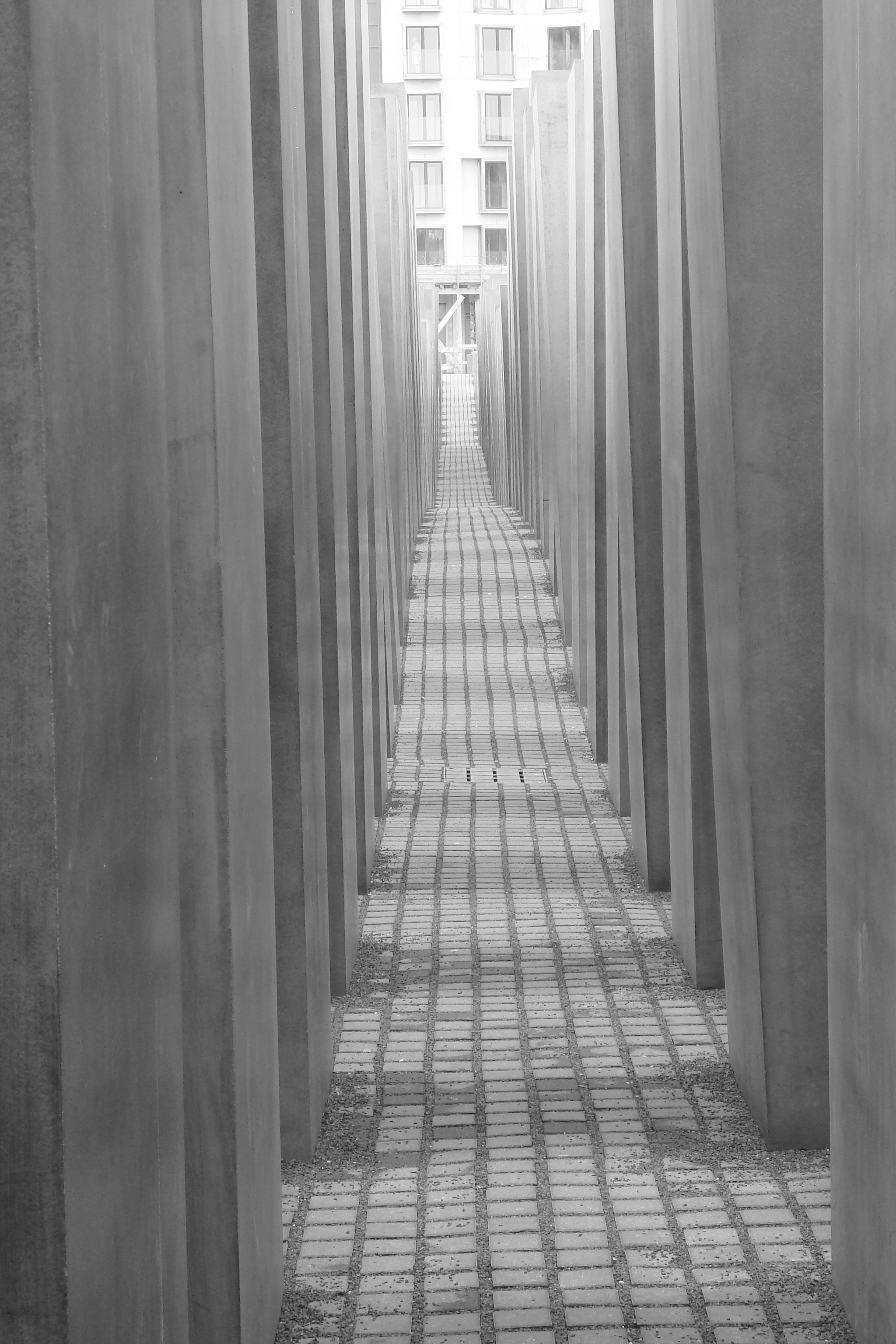 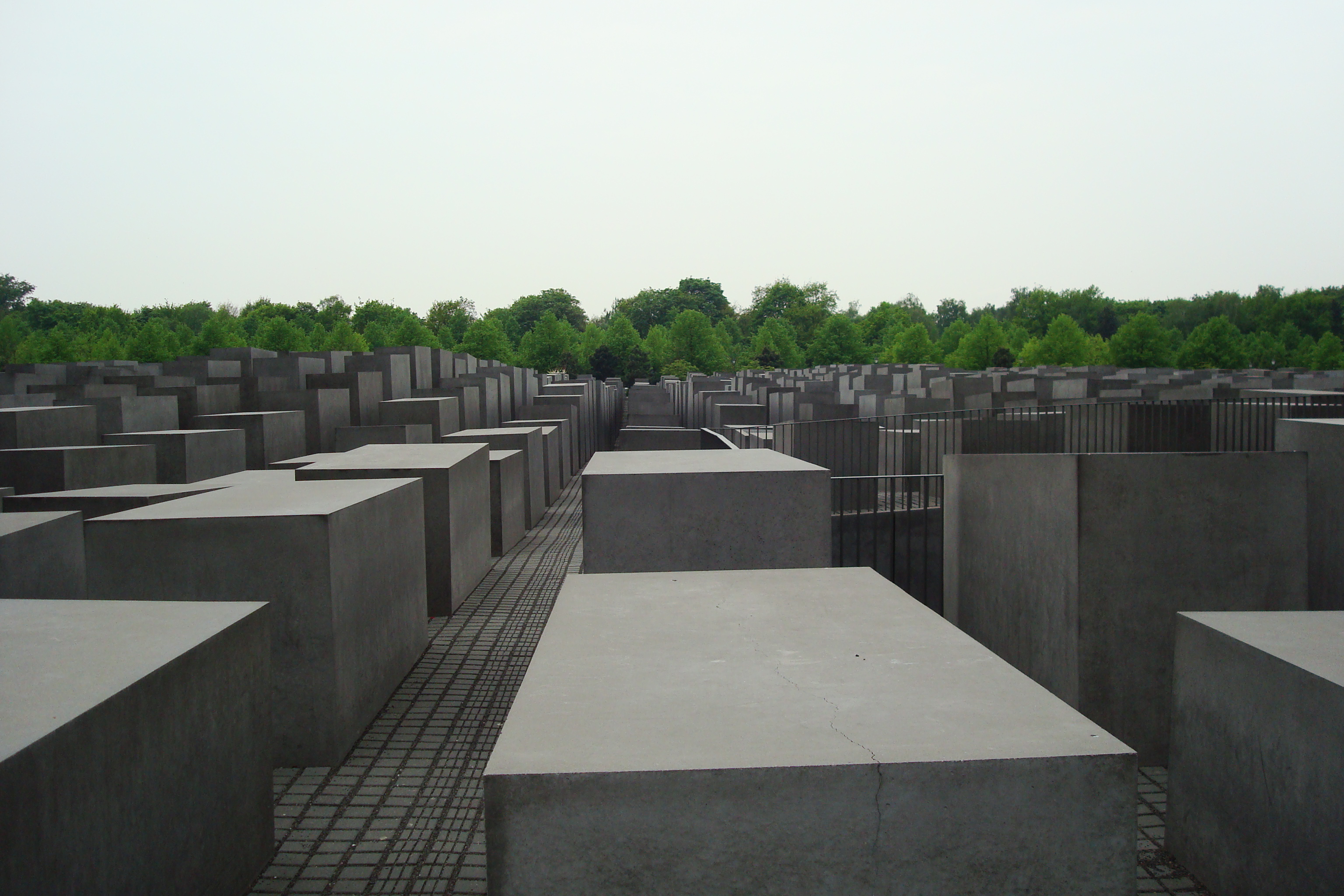 I soon discovered that you haven’t even scratched the surface of somber until you go below ground to the “Information Center” where the story of the murdered Jews of Europe and the names of all of the lives taken during the Holocaust are listed. People walked in silence through the rooms, many with tears in their eyes while looking up at the faces and names of people who were senselessly and horrifically taken from this world. I can’t even put in words how powerful this memorial is; if you’re ever in Berlin, I highly recommend seeing it.

Feeling very somber and heavy-hearted, we walked towards the ubiquitous symbol of Berlin, the Brandenburger Tor, or the Brandenburg Gate. Situated on the grand boulevard of Unter den Linden, the gate was originally built in 1791 as a symbol of peace commissioned by Emperor Wilhelm II. Ironically, the gate became a symbol of a divided Berlin in 1961 with the construction of the Berlin Wall. It incorporated the gate in its 96 mile-long stretch as it divided the city into East and West Berlin. The symbolism of peace and reunification was returned to the gate in 1999 with the fall of the Berlin Wall. 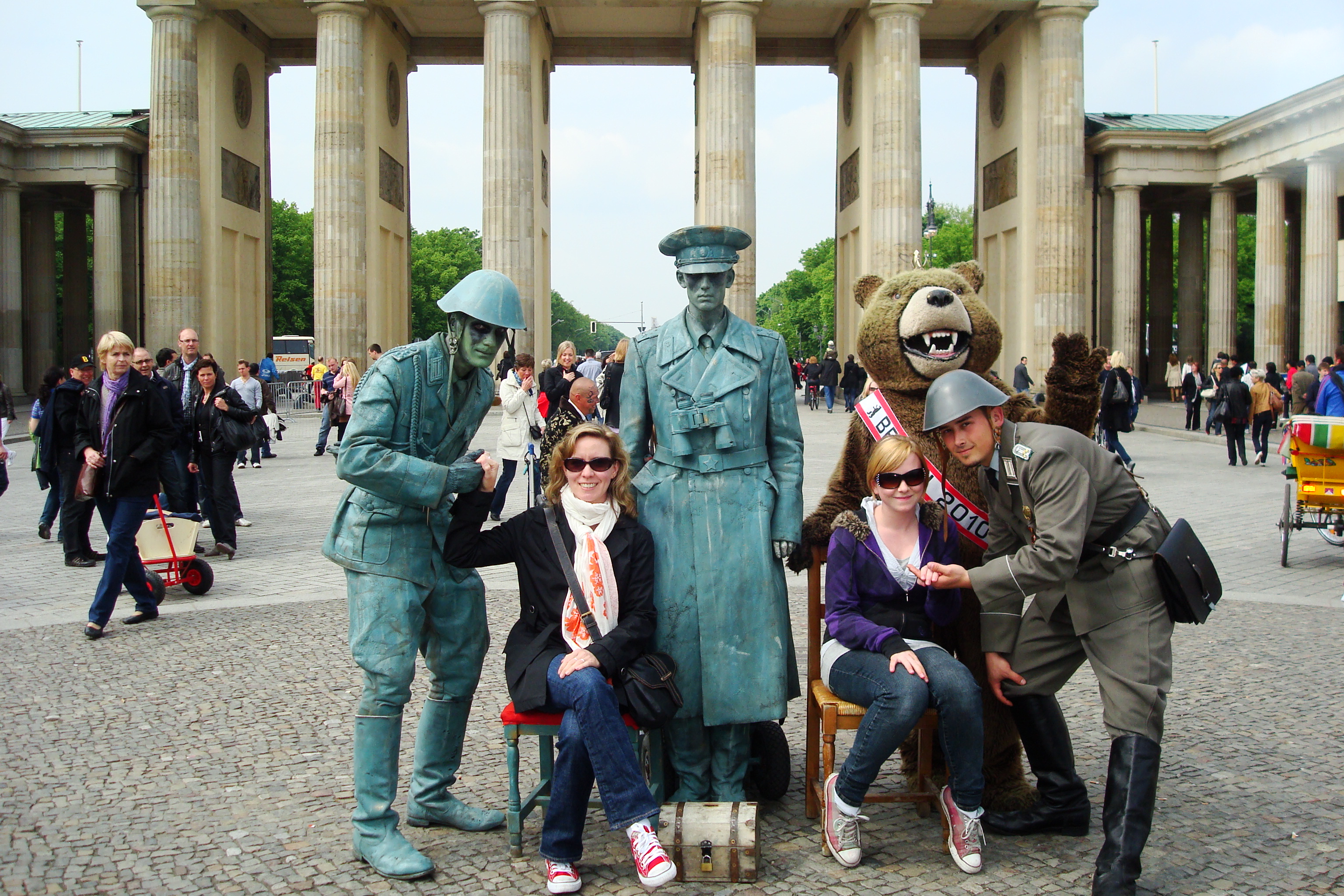 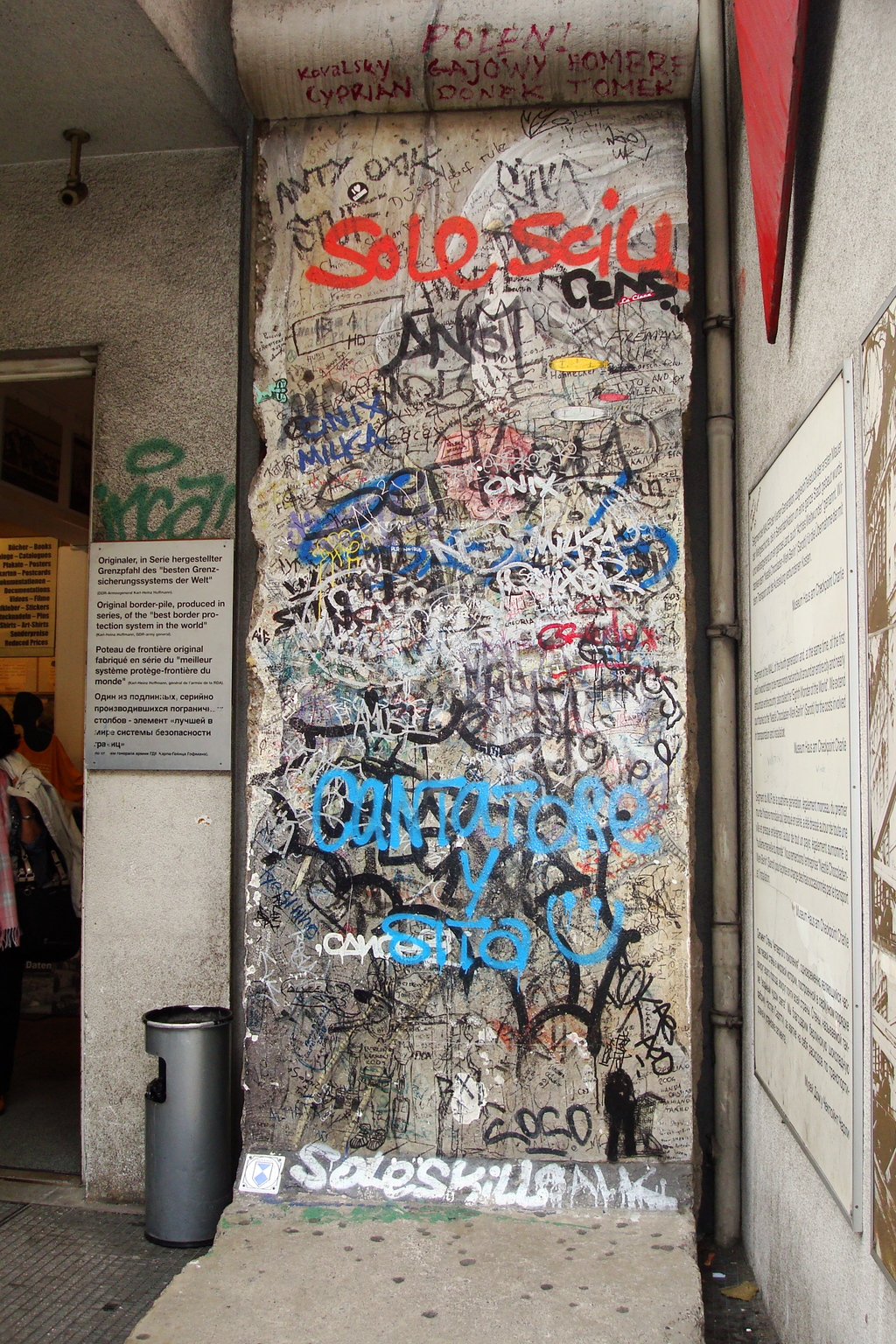 To see more of the city, we decided to get on one of the hop-on, hop-off tour buses. I had never taken one of them before and was surprised at how informative and easy it was to see a relatively huge section of the city. What I found most fascinating was the drive through the former East Berlin. The architecture in the residential neighborhoods was decidedly more stark and oppressive-looking compared to the decorative buildings of the former West Berlin. I don’t have any of my own photos to share, probably because it was so striking and shocking to see how things were so completely different once you crossed the political line that was once the Berlin Wall into the former Soviet sector of the city.

We hopped off near the Brandenburg Gate and walked down Unter den Linden where such magnificent sights such as the venerable Berlin Opera House (built in 1912) have been preserved. In November 1943, it was almost completely destroyed by fire bombs during WWII. It was later rebuilt and opened again in 1961 featuring Mozart’s Don Giovanni. 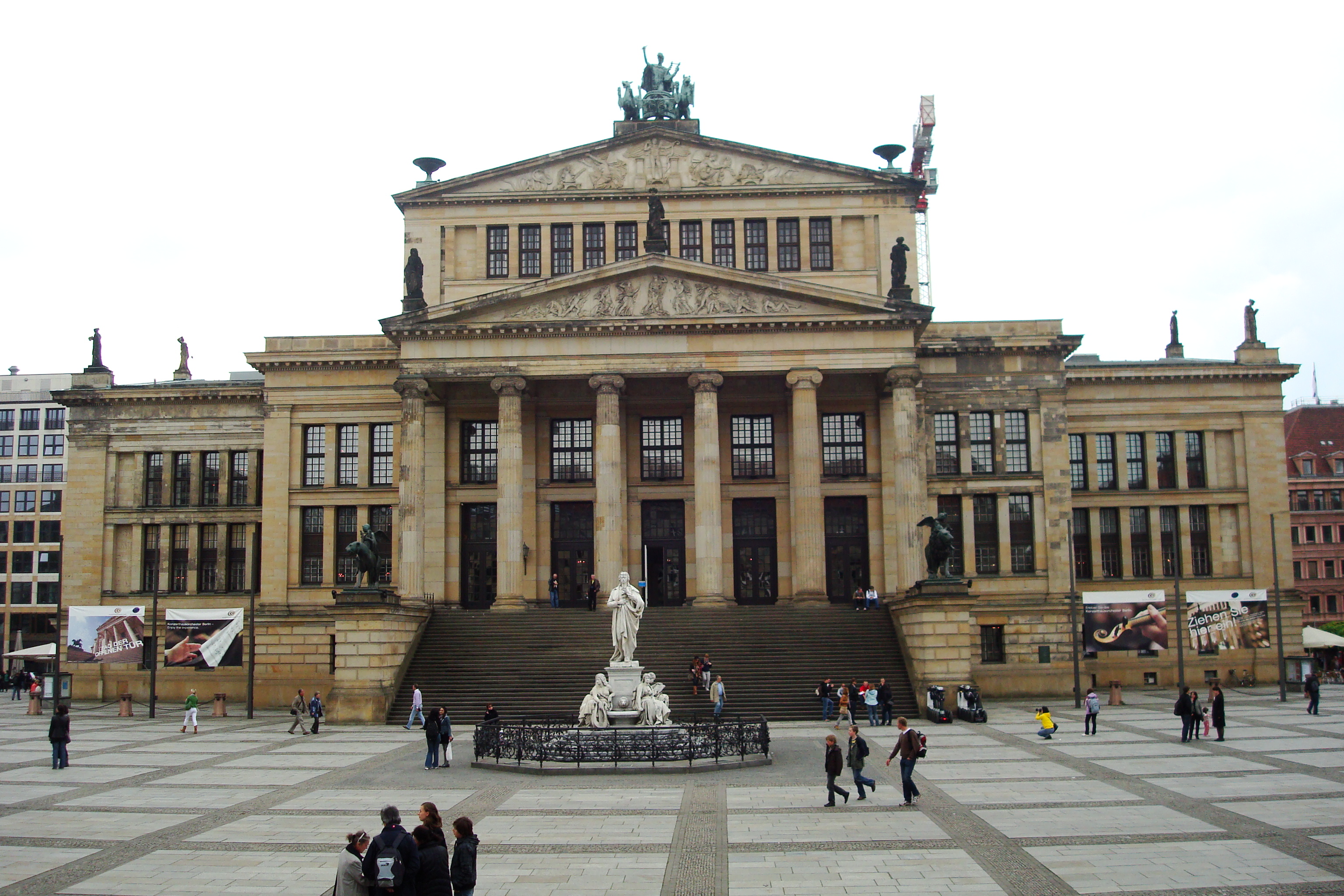 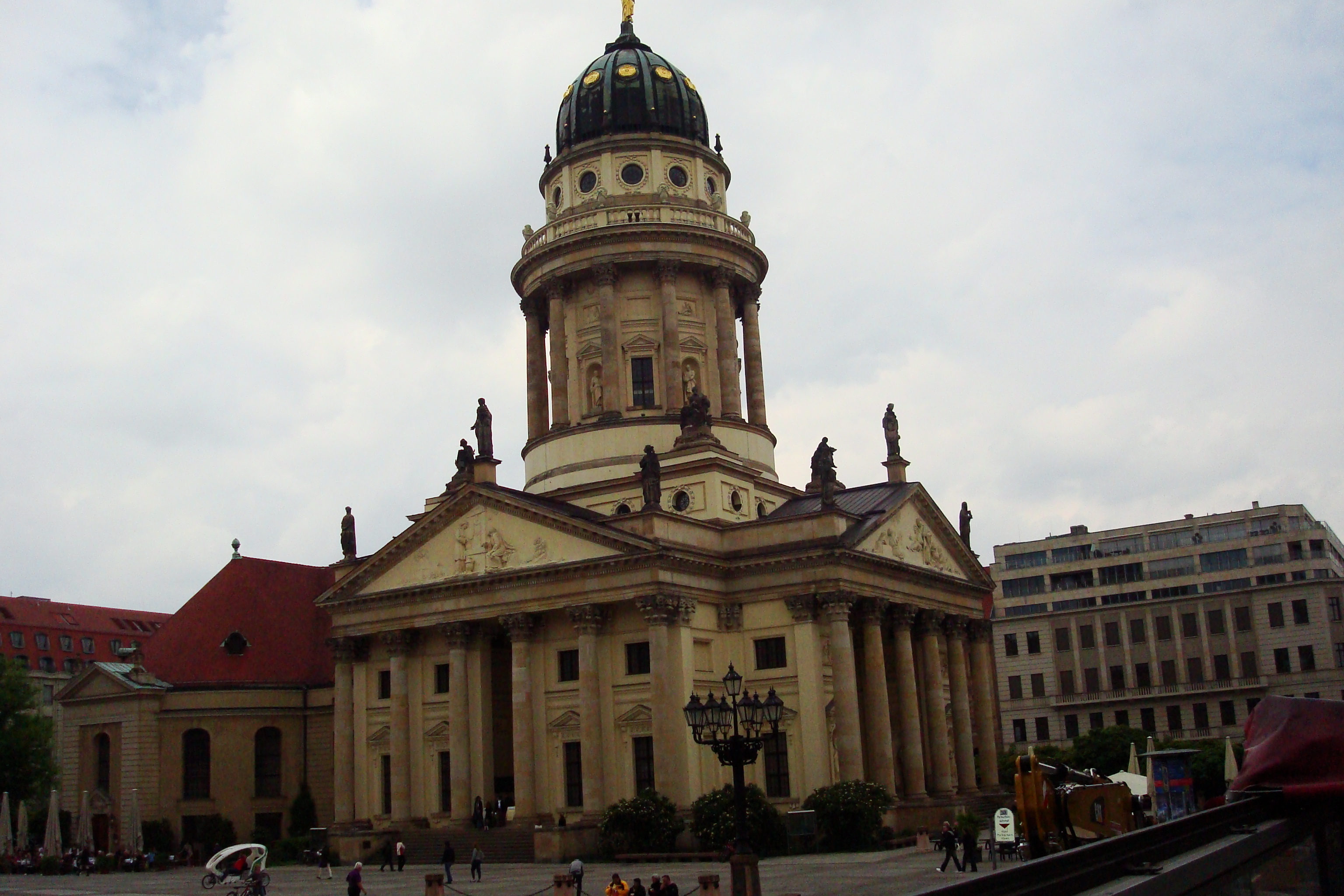 Deutscher Dom, the German Cathedral, built shortly after the French Cathedral. It was completely destroyed by fire bombs during WWII, then rebuilt during the 1980’s and opened as a museum in 1996.

Before going for dinner, Anne wanted to show us Hackesche Höfe, a series of eight interconnected courtyards (höfe) in which small shops, cafes, restaurants, and apartments were tucked away like a miniature city within a city. 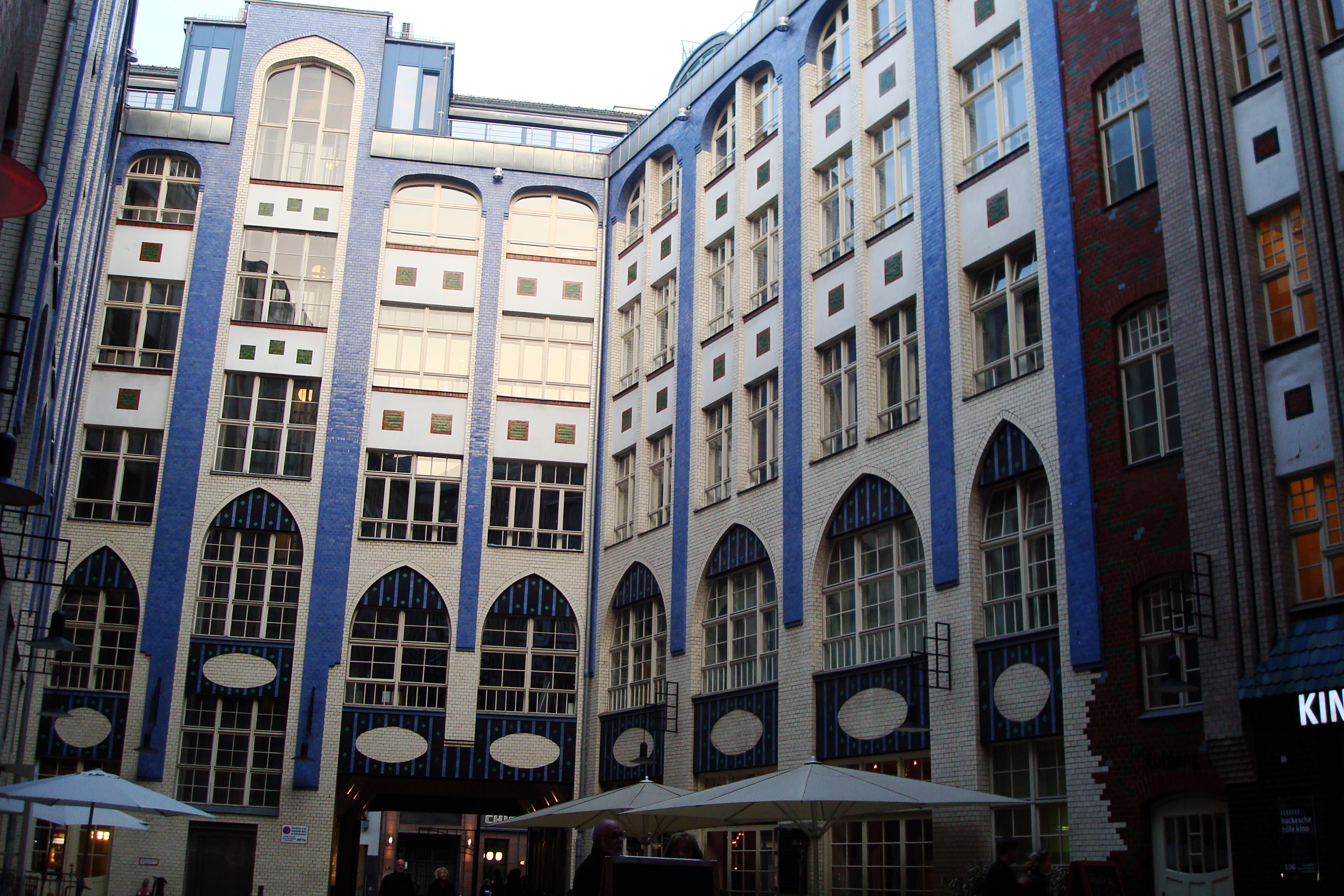 Wandering through the courtyards of the Hackesche Höfe

For dinner, Anne insisted we go to a restaurant where I could try a Berliner Weisse, a German beer mixed with one of two different flavorings: raspberry (my choice) or woodruff (Anne’s choice). It was sweet and refreshing. 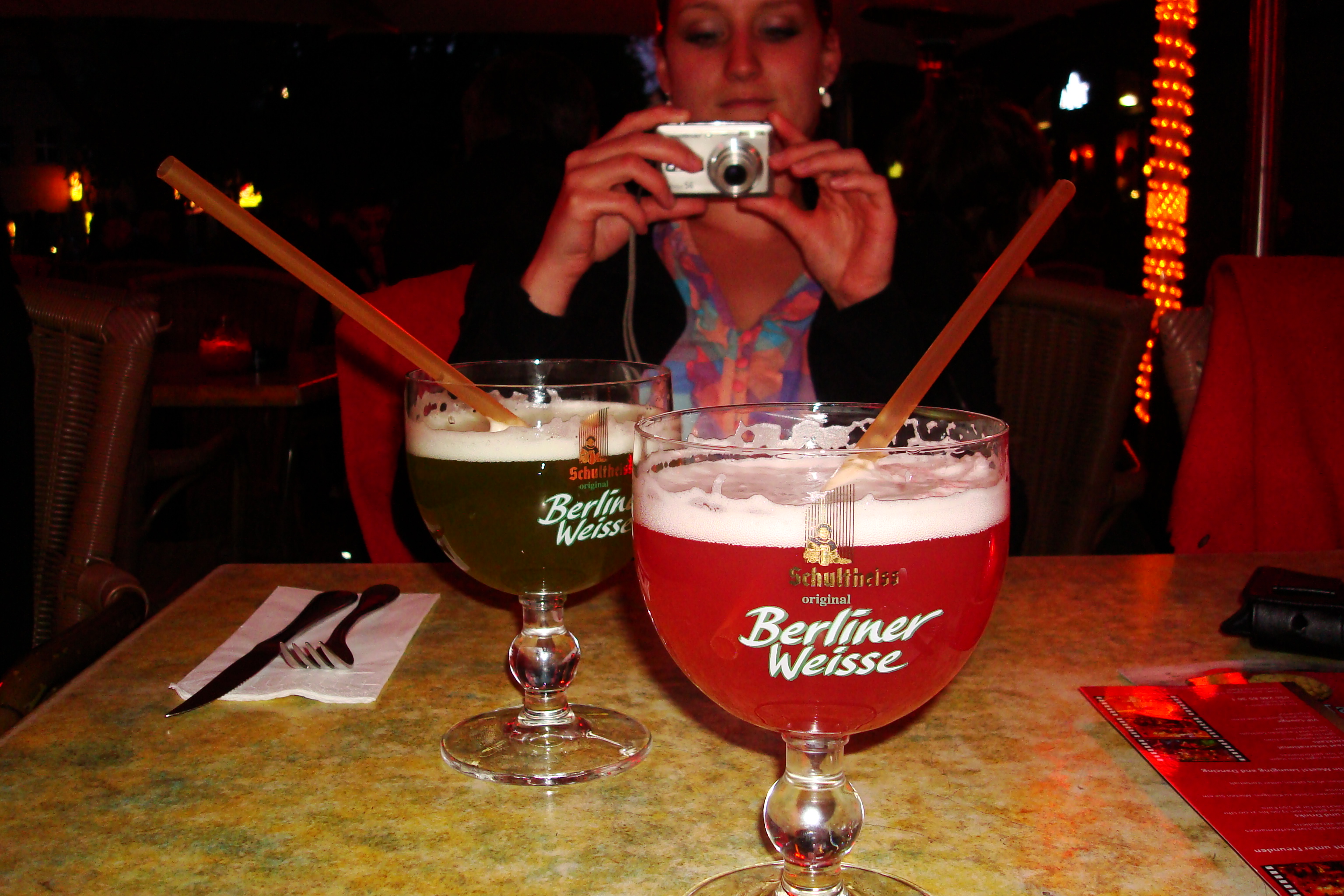 The next day brought cold rain that made it difficult for sightseeing. Nevertheless, we intrepid travelers trudged on going to sites such as the Topography of Terrors, an outdoor museum on the site of destroyed buildings of the headquarters of the Gestapo and the SS Nazi regime from 1933 to 1945. We were still reeling from our visit to the Memorial to the Murdered Jews of Europe the day before so we opted to not see it. Even though I was across the street when taking this photo, it gave me chills just to think about the horrors that were committed in that location. 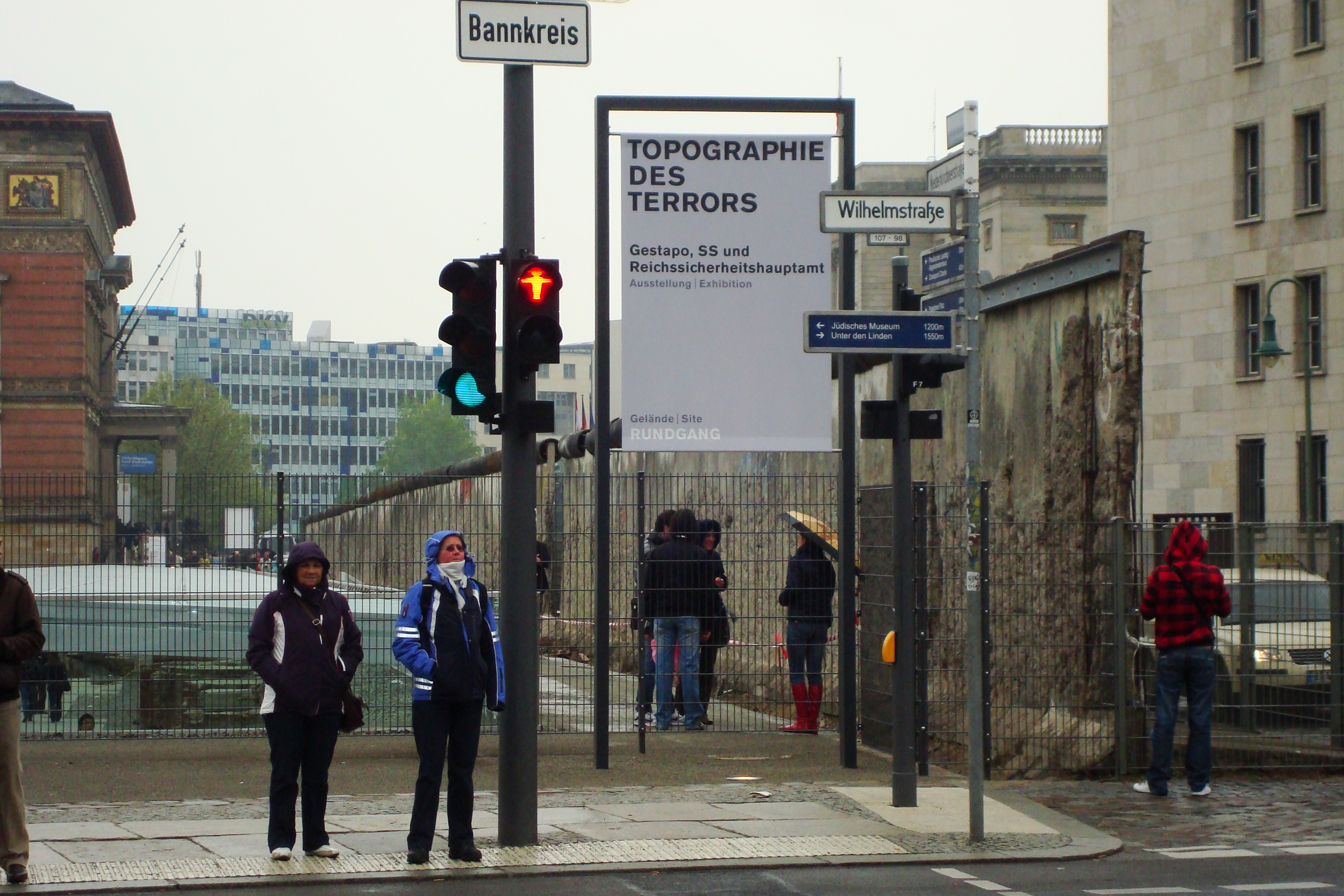 Next we walked to the site of Checkpoint Charlie, the checkpoint between the American and Soviet sectors of the city. The actual guard station that once stood there has been refashioned and is a touristy place for photo ops with actors posing as American and Soviet soldiers on guard duty. 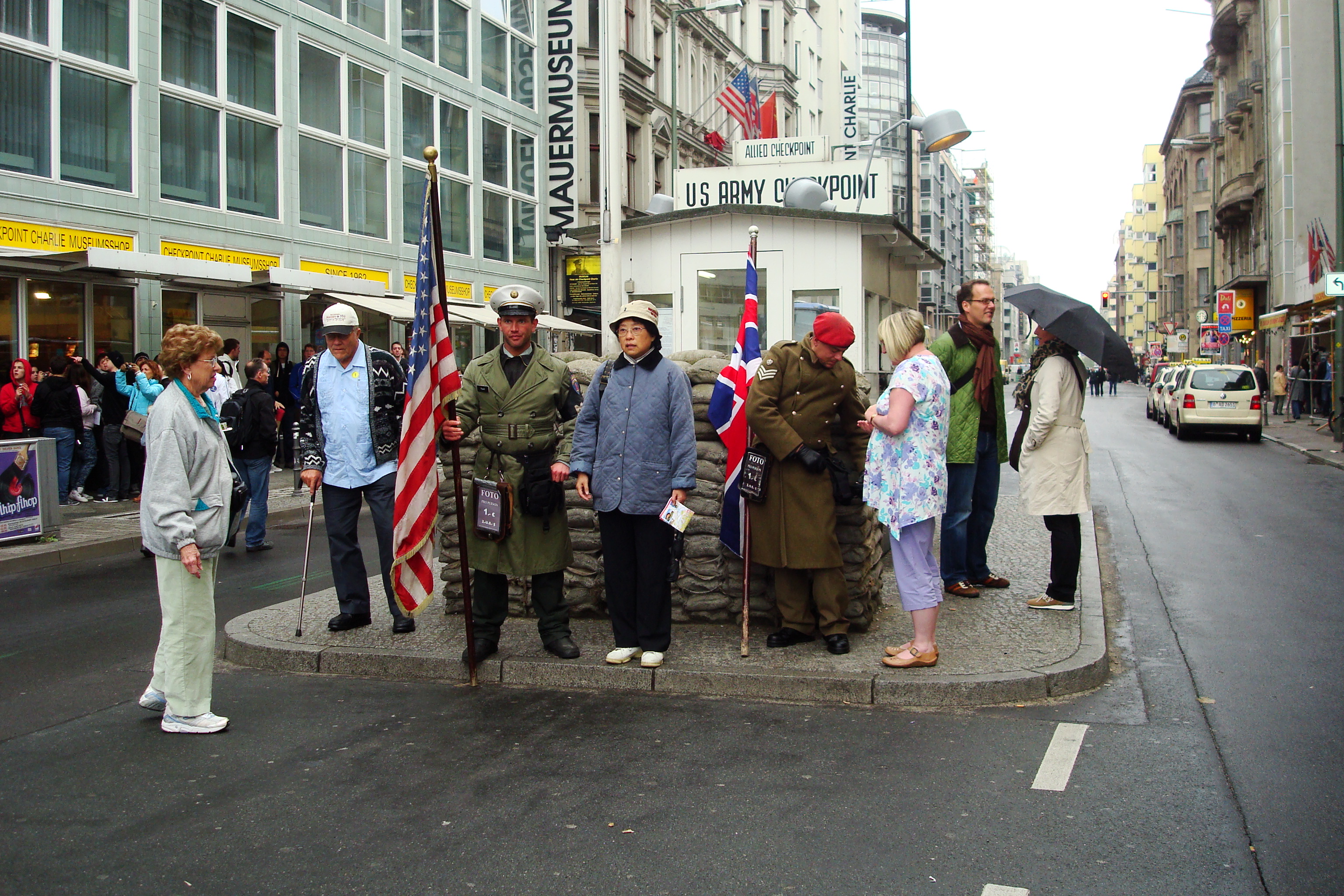 What I found more interesting than the checkpoint itself was the photography exhibit that stretched down the street and explained the history of the wall. 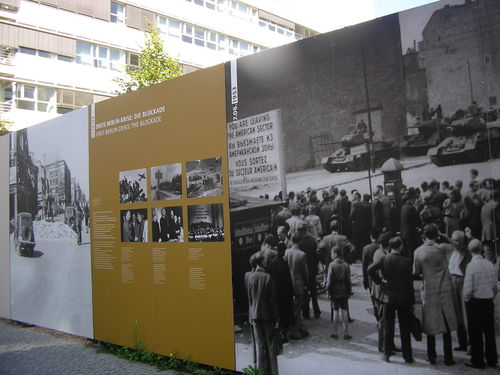 Looking for something less somber, we decided to go to the Pergamon Museum, located on Museum Island in the middle of the Spree River. The namesake of the museum, the Pergamon Altar, is on display in its complete, original size. The museum also houses an impressive collection of ancient Islamic and Middle Eastern art discovered by German archaeologists in the early 20th century. 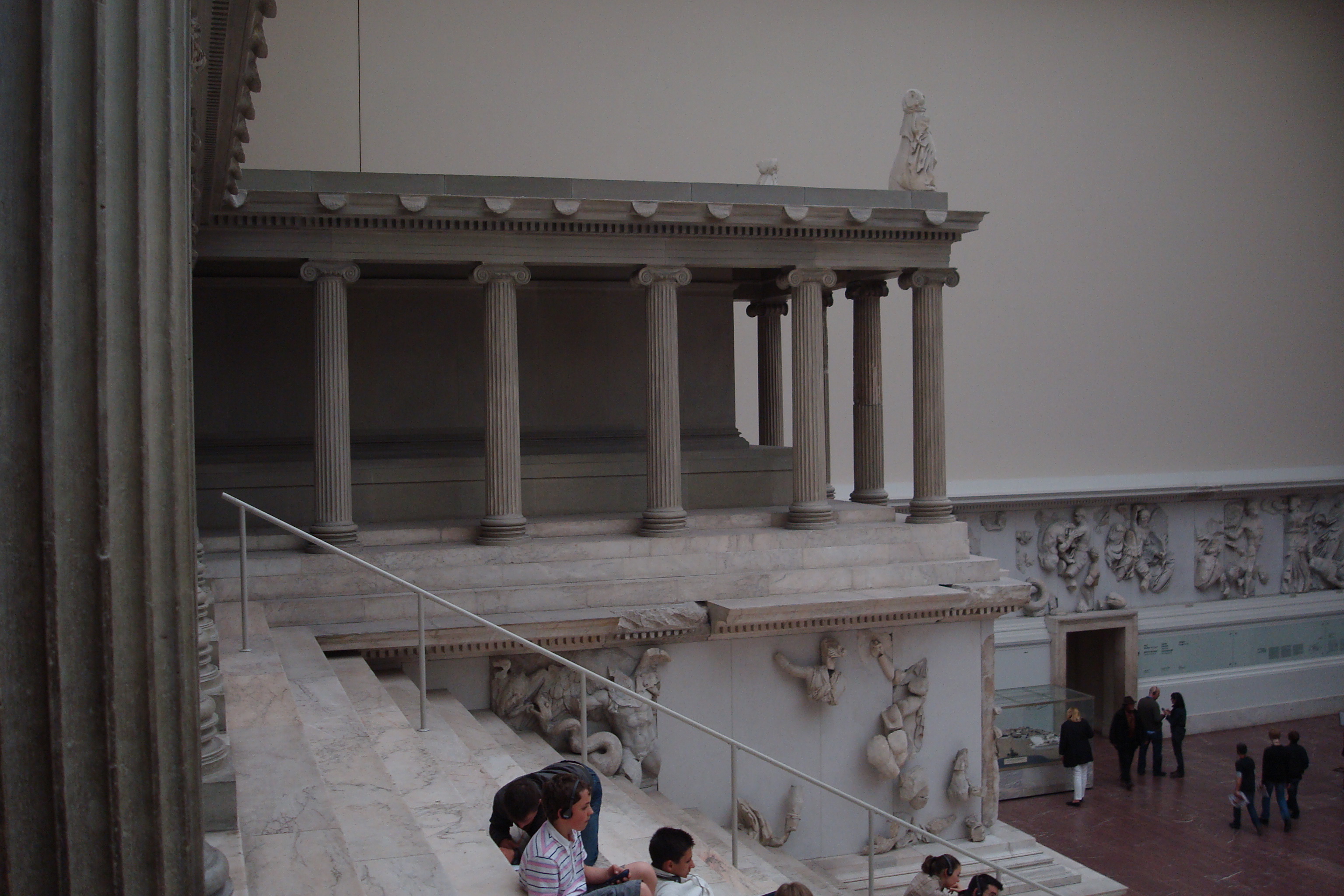 Built during the 2nd century on the terrace of the acropolis of the ancient city of Pergamon in Asia Minor, the reliefs and freezes are so intricate and detailed that I spent a great deal of time slowly wandering around the massive structure to see them all. Sadly, I couldn’t touch the ruins like I could when visiting the Porta Nigra in Trier (read more on that here) or the Roman ruins of the Chellah Necropolis and Kasbah (more on that here).

Our time in Berlin was winding down but before we took the train back to the airport, a stop in Berlin’s famously huge KaDeWe department store was in order.

Founded in 1905, Kaufhaus des Westens is reportedly the second largest department store in all of Europe. It certainly gives NYC’s Macy’s a run for its money in terms of sheer size and grandeur.

Seeing the Berlin of today definitely changed my views of the city. Like a phoenix rising from the ashes of its haunting history, Berlin is a modern city in the midst of shedding its post-WWII image and the decades it spent divided by a massive concrete wall. The juxtaposition of the old and new throughout the city is, to me, a testament to the strength of its citizens and to Germany in general. Instead of shying away from the horrors of the past, Berlin acknowledges what once was while also showing that the past, while deeply influential in its future, doesn’t have to define it.

8 thoughts on “Berlin: Rising from the Ashes”

← Dear Benedict: On the Gifts Frankenstein Gave Me