← Letters from Benedict: On Frankenstein at the Movies & Signature Features

Dear Benedict: On the Gifts Frankenstein Gave Me→ 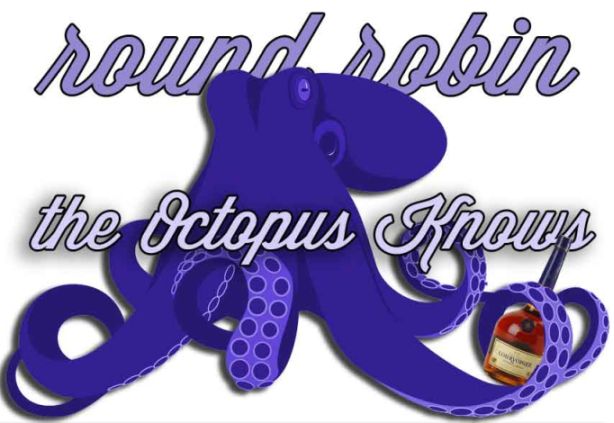 In early April, the talented and creative Laird Sapir suggested a collaborative fiction writing project that would develop across the blogs of writers from various genres.

The complete list of participants with links to each installment is available at The Octopus Knows on Laird’s blog.

Elaine Smothers wrote the last scene on her blog and left us wondering what would happen after a blast tore apart the apartment where Ninja the octopus was being held captive. Here’s what happened last:

“Stay here until I give the okay,” Simon warned her. “At least one of us needs to make it out of here alive.”

For once, Marguerite conceded without argument. She was about to voice her stipulations when she realized she was alone in the hall.

“Holy mother of …” Before Simon could issue further expletives, Marguerite was beside him, mouth open in abject horror, searching for words she’d never find.

Ninja had wedged his body into a corner of the wall, tentacles grasping baseboard, doorknob, and any projection that might prevent him from slipping into the bottomless fissure that now divided the room.

Clicking his parrot-like beak in agitated consternation, he looked from Simon to Marguerite, his words clipped and precise: “I don’t know which of you is responsible or what you’ve unleashed, but it’s not from this world…

Simon stood there, mouth agape, sucking in an unhealthy amount of dust and debris. It sent him into a spasmodic coughing fit and nearly tossed him into the chasm created by the blast. Marguerite grabbed the back of his shirt and pulled him back to safety, letting him fall to the floor in a cloud of dust. Before he could utter a thank you, Marguerite had used her wand to weave a sturdy ladder out of the remaining bed linens for Ninja to make his way across the jagged opening in the floor.

“I see Simon has reunited with his bodyguard,” Ninja said.

Marguerite snorted. “Trying to keep him from killing me is more like it.”

It was just like old times: Ninja and Marguerite making jokes at Simon’s expense while Simon lay somewhere nearby recuperating from whatever pickle he had gotten himself into. If things weren’t so dicey at the moment, Simon might have cracked a smile at the nostalgia of it all.

“Hardly,” Simon said, standing up and attempting to brush the soot off his pants. “Need I remind you of Berlin? And what about Stockholm? And then there’s -”

“Stockholm? Are you kidding me?” Marguerite scoffed. “It was me that kept you from lighting yourself on fire that night! You and that stupid afro wig you insisted on wearing.”

“Hey, that wig has come in handy more times than I can count,” Simon said, chuckling at the memories that flooded his mind. “Remember the time we were in London and we…” Simon began but couldn’t finish the sentence. London. The scene of the accident. The humiliation of it all overwhelmed him, the memories as fresh as if it had just happened yesterday. Tears welled in his eyes and his bottom lip trembled.

Marguerite sighed heavily and rolled her emerald eyes. She didn’t want to be stuck reeling Simon back from Oldwoundsville, not when there were more important things to focus on. “Ninja, what happened here?”

Ninja slithered across the floor to the bed. He was always more comfortable in water but seeing as the tub was somewhere near China by now, the damp mattress would have to do. Thank goodness this dump still had water mattresses in every room and this one happened to have a tiny leak.

“As you both know, I was brought here under duress in a bag by that dolt, Braden. It wasn’t long before Mr. Jones arrived looking rather haggard, if you ask me, though not nearly as bad as our friend here,” Ninja said, pointing a tentacle at Simon. “What is with you middle-aged men and your obsession with junk food? If I had the ability to sign up for an aerobics class, I’d be all over that in slick second. Why just the other day-”

“Ninja!” Simon and Marguerite both snapped.

The octopus narrowed his eyes at them. He hated being interrupted almost as much as he hated it when Simon hid the Courvoisier. At least the package with the Flashdance DVD and stretchy terry cloth headband and argyle leg warmers (eight of them, of course) had arrived before he had been kidnapped. Ninja had been waiting for days for Simon to leave the house so he could have himself a one-octopus dance party but the guy never went anywhere. Until today, the very day Mr. Jones put the plan into action.

“Fine. Have it your way,” Ninja said, crossing two of his tentacles across his chest. “My guess is Mr. Jones came to take me back to the secret underground lab for more experimentation when one of you,” Ninja’s glare was pointedly focused on Simon, “caused the floor to go kablooey.”

“Hey, it wasn’t me,” Simon said, holding up his hands and looking from Ninja to Marguerite.

“I see you have your wand back,” Ninja said, nodding at Simon’s hand.

“Yes, it was returned to me this evening,” Simon said. He glanced Marguerite’s way to gauge her reaction to his statement but her calm, cool expression gave nothing away.

“And you’ve used it this evening?” Ninja asked.

“Well, yeah. Of course I have,” Simon replied.

Ninja sighed and shook his head. “And while your wand was out of your possession for the last year, did it occur to you that it might have been tampered with?”

Simon looked at the trusty wand in his hand. He tuned it over, scrutinizing it for any perceptible changes or alterations but saw none. He turned to Marguerite and said, “Was something done to Sparky?”

Marguerite hated that he still called his wand Sparky, a remnant of their high school days when they named everything from wands to plants to pillows. “Not that I’m aware of,” she said. “I wouldn’t have given it to you if I thought it had been compromised. Something else did this.”

Simon regarded her with fresh skepticism. He still wasn’t sure he could trust her. On the one hand, she had disappeared from his life after the accident when he needed her most. On the other hand, she did just save him from falling to a rather gruesome death just a few moments ago. He figured she wouldn’t have bothered if she had an evil plot to kill him. As difficult as it was going to be, Simon realized that if he was going to make it through this night he was going to have to trust her.

“I believe you,” he said, one corner of his mouth curled up in an awkward half-smile.

“That’s always been your biggest fault as an agent. You trust way too easily,” said a scratchy voice from behind them. Marguerite and Simon spun around to see Mr. Jones standing in the doorway to the apartment with his umbrella pointed at them like the gun it truly was. His dark hair was singed and smoke rose in wisps from his clothes. Soot covered his face making his pale grey eyes appear like ghostly orbs floating in the darkness.

“Mr. Jones!” Marguerite gasped. “We thought you were–”

“Dead? My dear, it would take more than a blast from an altered wand to do me in,” Mr. Jones said. Still pointing the gun at them, he pulled from his jacket pocket a crisp, white handkerchief embroidered with a crimson fleur-de-lis in the corner. He dabbed at his face a few times and then blew his nose.

Simon looked from his wand to Marguerite and back again. Had Sparky really caused all of this damage? Had Marguerite lied? Had she tampered with his wand? Or had Mr. Jones altered it knowing that Marguerite would sneak it to him tonight? Or maybe, just maybe, Braden caused this as a way to save Ninja from the evil clutches of Mr. Jones.

“Now we can do this hard way or the easy way,” Mr. Jones said. “But one way or another, I’m going to leave with the octopus.”

Ninja cleared his throat to get Simon’s attention. A subtle flip of the lucky tentacle and a look exchanged between the two old friends told Simon all he needed to know.

“You can have him,” Simon said coolly. “He was starting to get on my nerves anyway. But it’ll cost you.”

“What? He’s racked up quite the credit card bill with all of his Home Shopping Network purchases,” Simon said. Ninja snorted derisively but otherwise remained silent. “Don’t think I haven’t noticed the packages arriving each week. Leg warmers? Really?”

“Hey, at least I get off the couch which is more than I can say for you,” Ninja said.

“Helloooo! Y’all seem to have forgotten I’m the one with the Gunbrella here,” Mr. Jones said, proudly waving his latest invention as a reminder that he was the one with the upper hand. “The only deal I’m making is the one where I spare your lives in exchange for the octopus.” He once again pointed the gun at Simon’s chest.

“I’ll go with you,” Ninja said, sliding down from the bed. “Just put that ridiculous thing away.”

Mr. Jones was about to utter an argument in favor of the ingenious Gunbrella (“The umbrella that can save you from a thunderstorm as easily as it can save you from a mugger!”) when a flash of brilliant white light suddenly filled the room causing him to drop the Gunbrella to shield his eyes. Then just as quickly as it appeared, the light faded and the room returned to its original dimly lit ambience.

Mr. Jones knew what had happened before he even opened his eyes.

The room was empty.

A sly grin slowly spread across his face. Not only had they escaped with the octopus, but they also managed to take the Gunbrella with them. Just as he predicted, Simon never could resist a fancy gadget.

Mr. Jones took the remote control device out of his jacket pocket, extended the antenna and pressed the giant red button. It glowed like an evil eye and then began to flash indicating the tracking device was working.

Meanwhile, somewhere dark and far away, Simon, Marguerite, and Ninja landed one on top of the other with a thud and a squish, Ninja being the unfortunate one on the bottom of the dogpile. After disentangling themselves from each other, Marguerite flicked on her flashlight to have a look at their surroundings.

She barely heard the argument starting between Simon and Ninja, something that normally would have grated on her nerves, because her whole attention was focused on the thing her flashlight beam had found in the darkness.

“For the love of all that is chocolate, what IS that?”

Tune in next time for Richard Monro’s installment here at his blog to find out what happens next to Simon, Ninja, and Marguerite.

← Letters from Benedict: On Frankenstein at the Movies & Signature Features

Dear Benedict: On the Gifts Frankenstein Gave Me→