I am so glad you’re going to see the filmed production of Frankenstein when it’s showing in movie theatres in the U.S. Most certainly go see it both nights because Jonny Lee Miller and I swap roles for the second showing. That way you can see us both as Dr. Frankenstein and as the Creature. I know, you would have enjoyed it live in London a bit more as it was properly intended to be seen. A movie doesn’t quite compare to live theatre, but at least you get to see the performance.

Editor’s Note: The U.S. showings are June 6th and 7th, not the dates shown at the end of the trailer.

So, does this soothe some of the angst you wrote me about last week after watching the last episode of Sherlock? Maybe? Just a teensy bit? Did I mention that I’m wearing very little when I first appear on stage as the Creature?

Speaking of pandering, sending me a parcel with all of my favourite sweets as a way to get critical Sherlock information out of me was a nice try. Do you really think I’m so easily swayed by my sweet tooth? 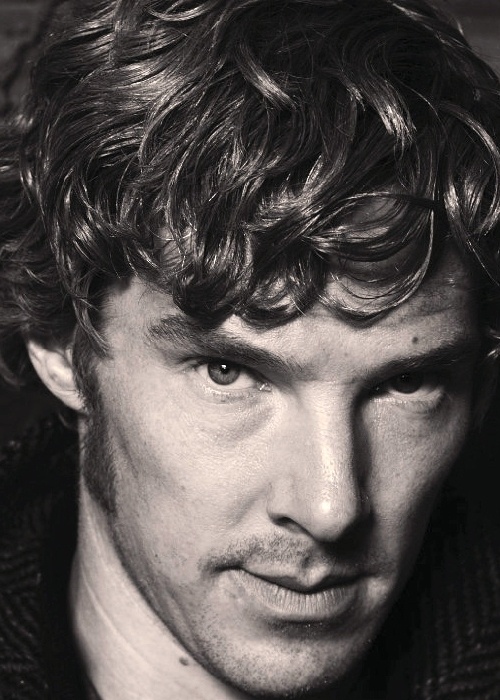 I’m not so easily swayed that I can’t send you my smoldering, skeptical look. Source: Uploaded by user via Tami on Pinterest

Thank you for sending it, though. I’m not sure if the strange occurrence that happened shortly after your parcel arrived is somehow connected, but knowing you I thought I’d ask.

I had been sampling a few of the tasty treats when I heard a knock at the door. A stout, elderly woman was standing on my doorstep stating she was there to clean my flat. I told her I hadn’t scheduled an appointment for a cleaning that day. She spoke in a language I wasn’t familiar with but she was insistent. After a few awkward moments with her speaking in foreign tongue and erratic hand gestures, I allowed her in to my flat because she clearly wasn’t going to take no for an answer.

There was something familiar about her, something I couldn’t quite put my finger on. Was it that she carried her portly figure as though she had never aged beyond the slender young woman she had once been? Was it the Hobbit-like appearance of her clothing? Or was it that she efficiently cleaned the rooms of my flat while the sounds of The Cure, Depeche Mode, and New Order could be heard coming from her 1980’s-era Walkman?

Before I could make any sense of it, I had a sudden urge to sit down on the sofa and close my eyes. I was quickly pulled into a bizarre dream world in which I was observing Sherlock being repeatedly questioned about the last episode by an unseen interrogator. I was drawn to the soothing voice asking questions of Sherlock. I was also grateful that the anti-truth serum Mark and Steven had given me after we finished filming the last episode was properly working. The soothing voice was persistent and I wanted to tell what I knew but the information was literally under lock and key in my mind.

When I awoke, my brain felt as though it had been combed through with a rake. Surprisingly, the cleaning woman was still there, sitting on a chair as though waiting for me to awaken. She had laid out a tray of freshly steeped tea and biscuits. I sat up, still groggy from sleep, and accepted the steaming cup of tea she handed me. She smiled, nodded knowingly at me, and then took her leave before I could utter any words. It wasn’t until she had been gone several minutes that I finally realized what was so familiar about her.

I should have looked for it when I first met her at the door. It’s the same feature that was evident on my rescuer that night I went to the movies. Obviously, it’s her signature feature:

The telltale tiny mole to the left side of her mouth.

I’ll certainly be looking for it whenever I meet someone new, yet oddly familiar to me from now on.

One thing’s for certain: being friends with you is never boring.

P.S. You might want to borrow my fake mustache next time, friend.

13 thoughts on “Letters from Benedict: On Frankenstein at the Movies & Signature Features”