← Letters from Benedict: On Secrets, Angst & The Long Wait 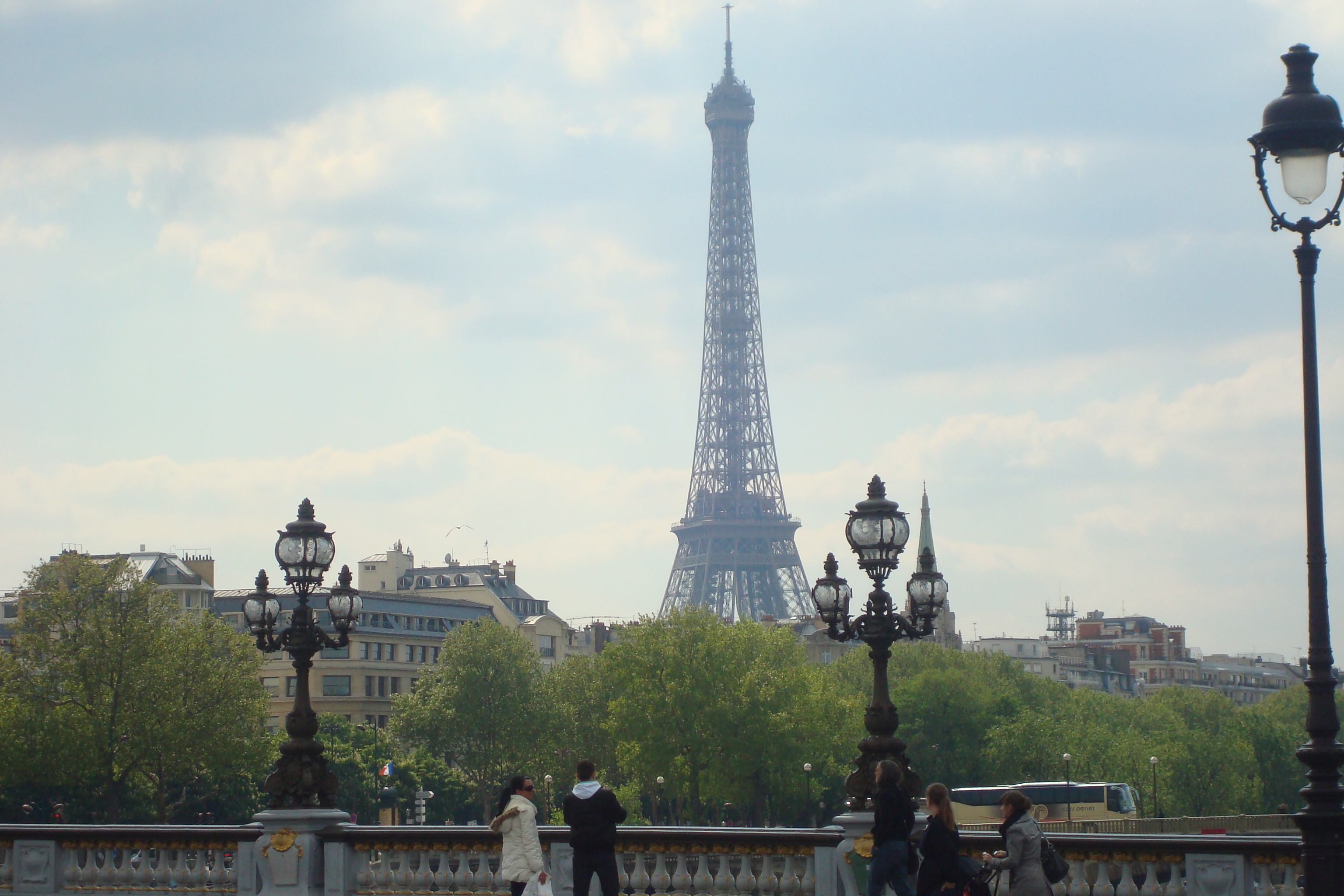 Paris is a mere three-hour train ride from St. Wendel, Germany, where my daughter and I were staying with our friend, Anne. Being that close to the City of Light, I didn’t have to think long about whether we would make the journey across the border in to France. How could we travel all that way and not go to Paris?

As I’ve said before in previous posts: Go big or stay home, right?

On the train as we hurtled past bucolic farms and rolling hillsides, I wondered if the Paris in my mind would measure up to the real thing. Just mention Paris and I could easily bring up a myriad of romantic ideas in my mind, carefully culled over the years from books, movies and the general media: friends sipping coffee at a sidewalk cafe, couples drinking fabulous wine over leisurely dinners, expensive couture artfully displayed in boutique windows, and amazing art and architecture around every corner. The closer we got to Paris, the more the iconic images swirled in my head: Notre Dame cathedral, the Louvre and the Mona Lisa, the Sacre Coeur, the Eiffel Tower, cobblestone streets lined with patisseries and boulangeries enticing you with treats of all kinds, and flower shops bursting with colorful beacons of happiness. Could any city stand a chance against all of that?

I would soon find out.

After checking in to our hotel, Anne, my daughter, and I set out on foot to explore the city. Our first stop? Notre Dame. (I figured we should start with the least desirable thing for the teenager and work our way up to what she considered the more fun stuff.) 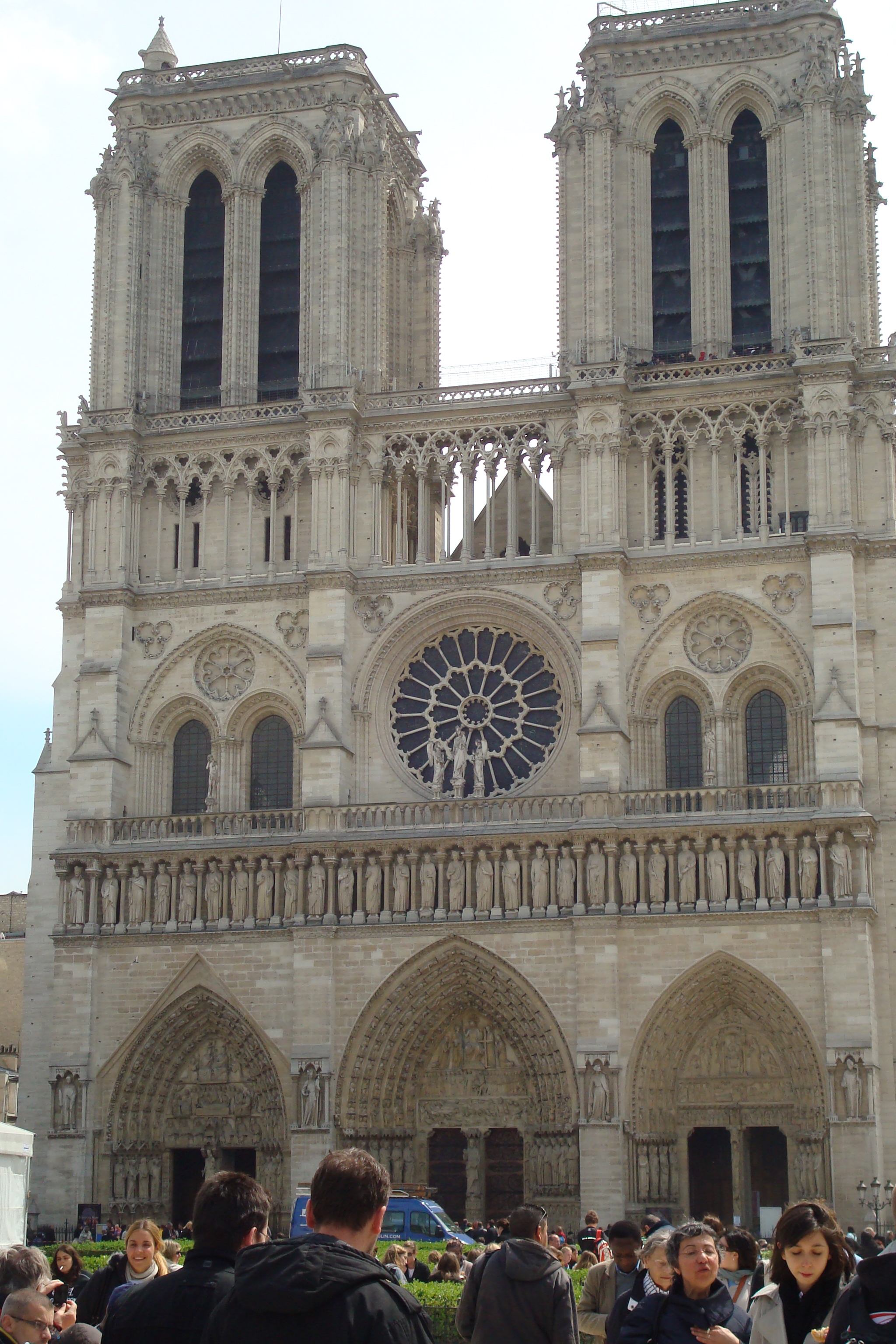 Notre Dame Cathedral (full name: Cathédrale Notre-Dame de Paris, “Our Lady of Paris”) is a Gothic cathedral on the Île de la Cité in Paris. Construction began in 1163 and was mostly completed by 1250. It is one of the most visited sites in France, welcoming over 13 million visitors each year.

I can attest to the popularity of the cathedral. It was packed inside with people jostling past each other for a glimpse of a piece of art or a better view of a stained glass window. It was gorgeous, don’t get me wrong; we just picked a bad time to see it. Regardless, we were able to get a sense of the place. (Not knowing much about the cathedral, I found myself wishing Anne’s father had written out a cheat sheet of facts for me to refer to.) 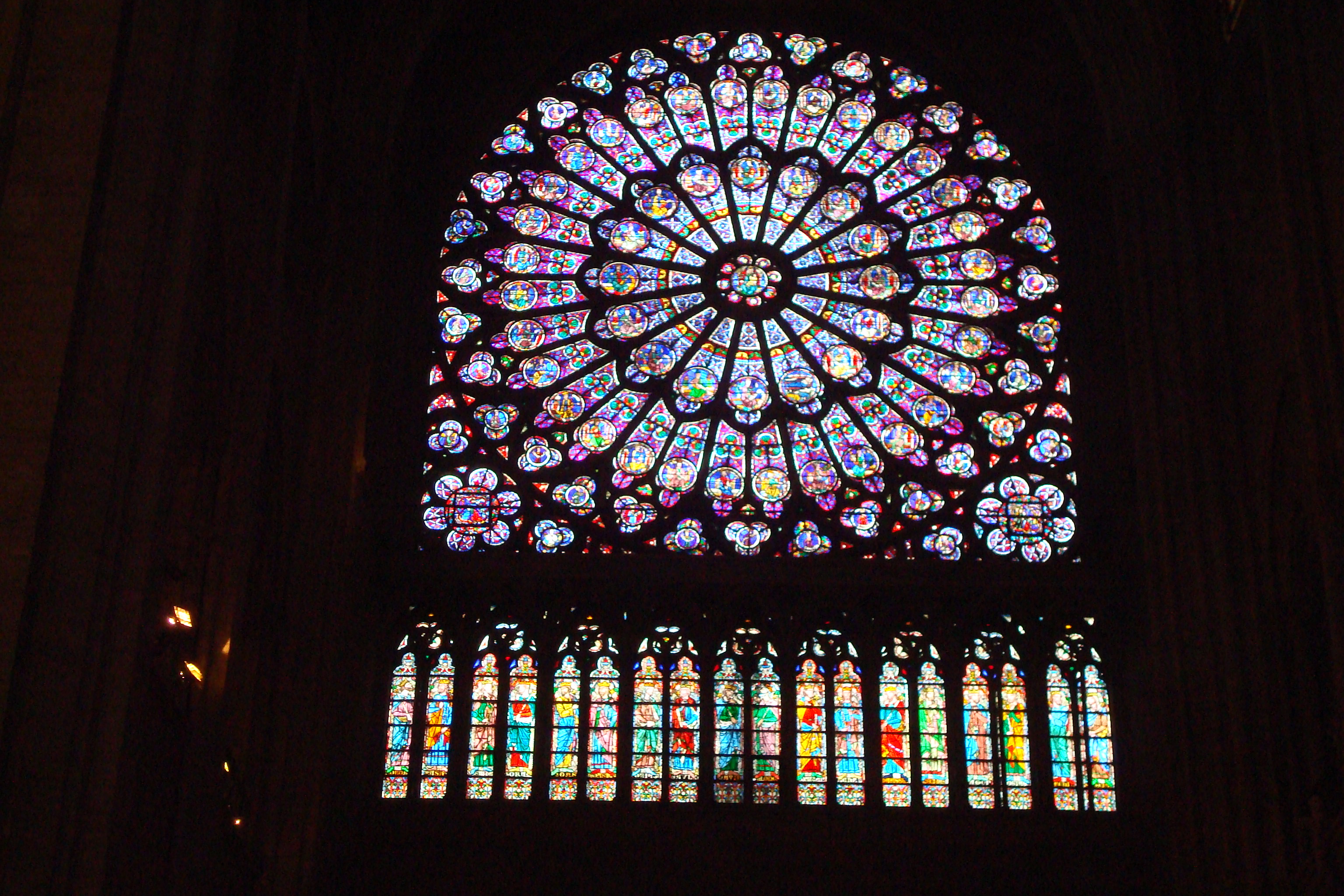 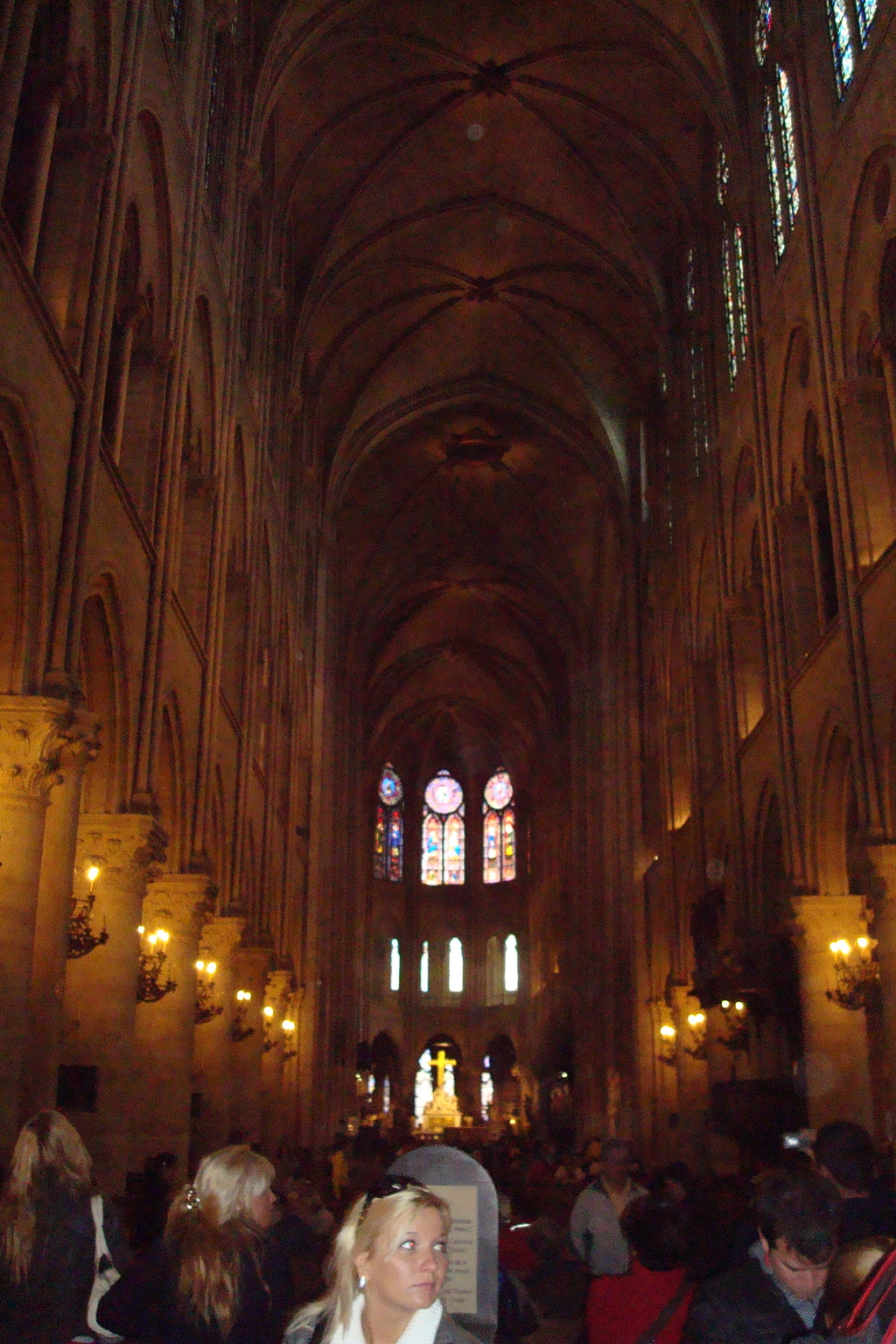 We left the quiet confines of Notre Dame and walked to our next destination: the Louvre. It was even more massive than I had imagined. I knew we didn’t have enough time to see even a fraction of the art inside, so we gave ourselves a time limit and decided we could be content seeing what we could in that time frame. 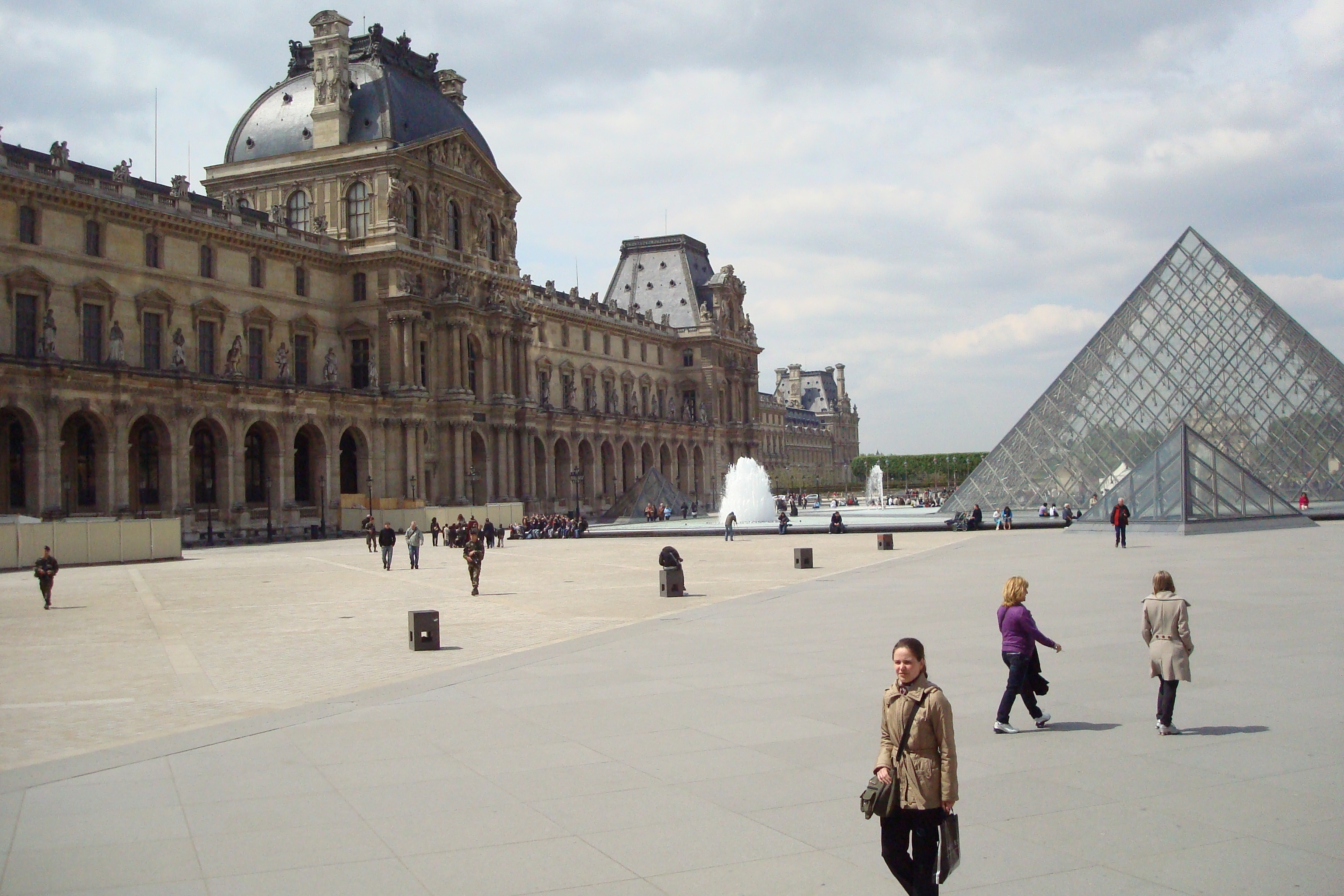 Turns out you don’t see much when you get yourself trapped in the wing with the Mona Lisa.

We easily found the Mona Lisa and were herded into the room with a lot of other people shuffling their way up to the famous painting. It is much smaller in person than I thought it would be. None of my photos came out very well so I won’t insult Da Vinci by posting one here. It was lovely but you couldn’t get close enough to it to really appreciate it.

We left the room with the Mona Lisa and wandered down the wing into a room with what has since become one of my favorite pieces of art in Paris solely because we passed it about a thousand times, trying in vain to make it to another part of the museum. I swear the grin on its face became both more smug and more hilarious each time we passed it. 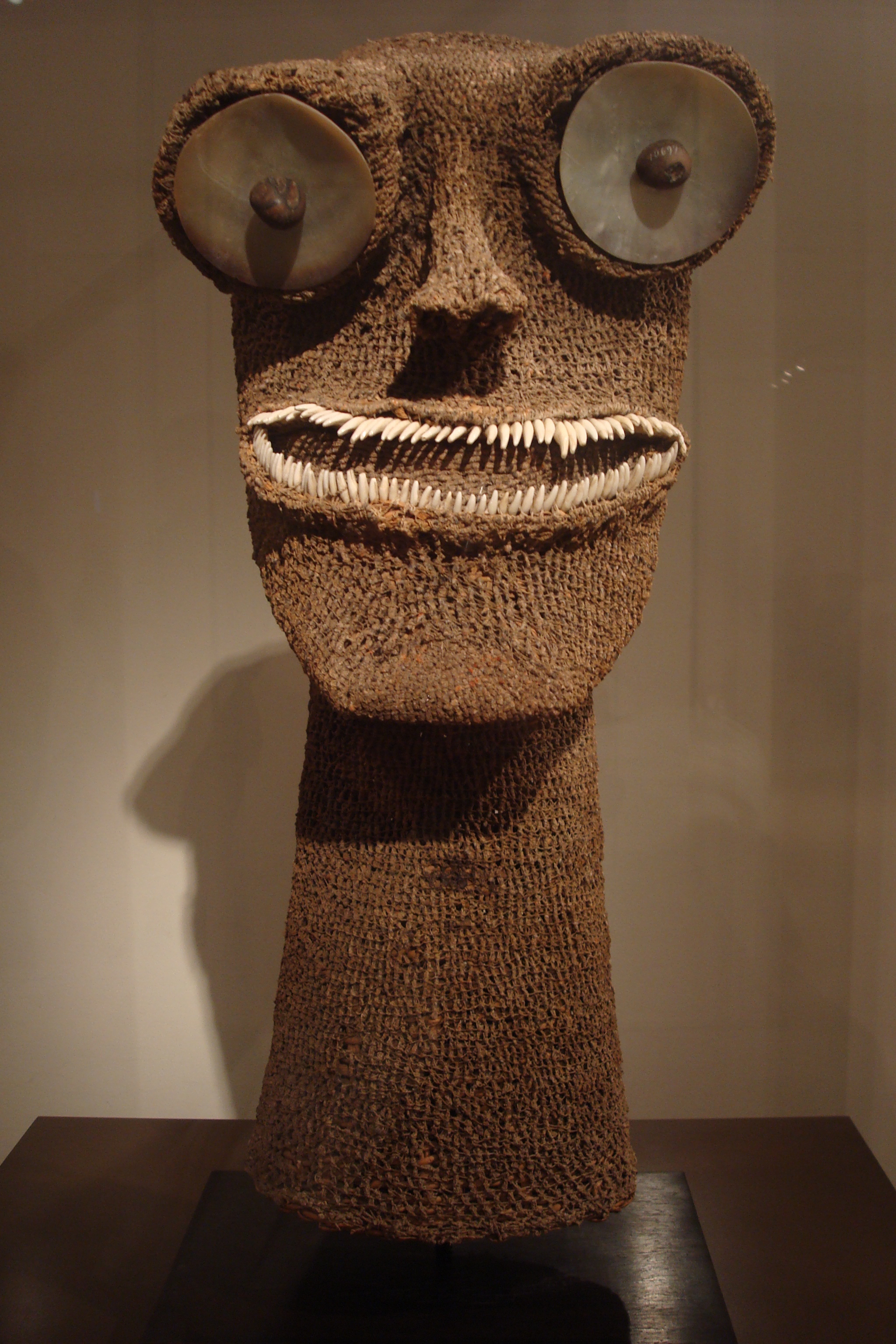 Silly art patrons! You will succumb to my devious plan to trap you here so I get noticed as much as that tart, the Mona Lisa. Mwhahahaha!

After consulting with a few security guards, we plotted our escape and finally made our way out of the Louvre. I plan to go back some day, though I will make it a point to avoid the wing with the Mona Lisa for fear that I may never make it out in this lifetime.

The sun was emerging from behind the rain clouds making it possible to have lunch at a sidewalk cafe. From there, we walked through the city with the Eiffel Tower in our sights as our next destination. 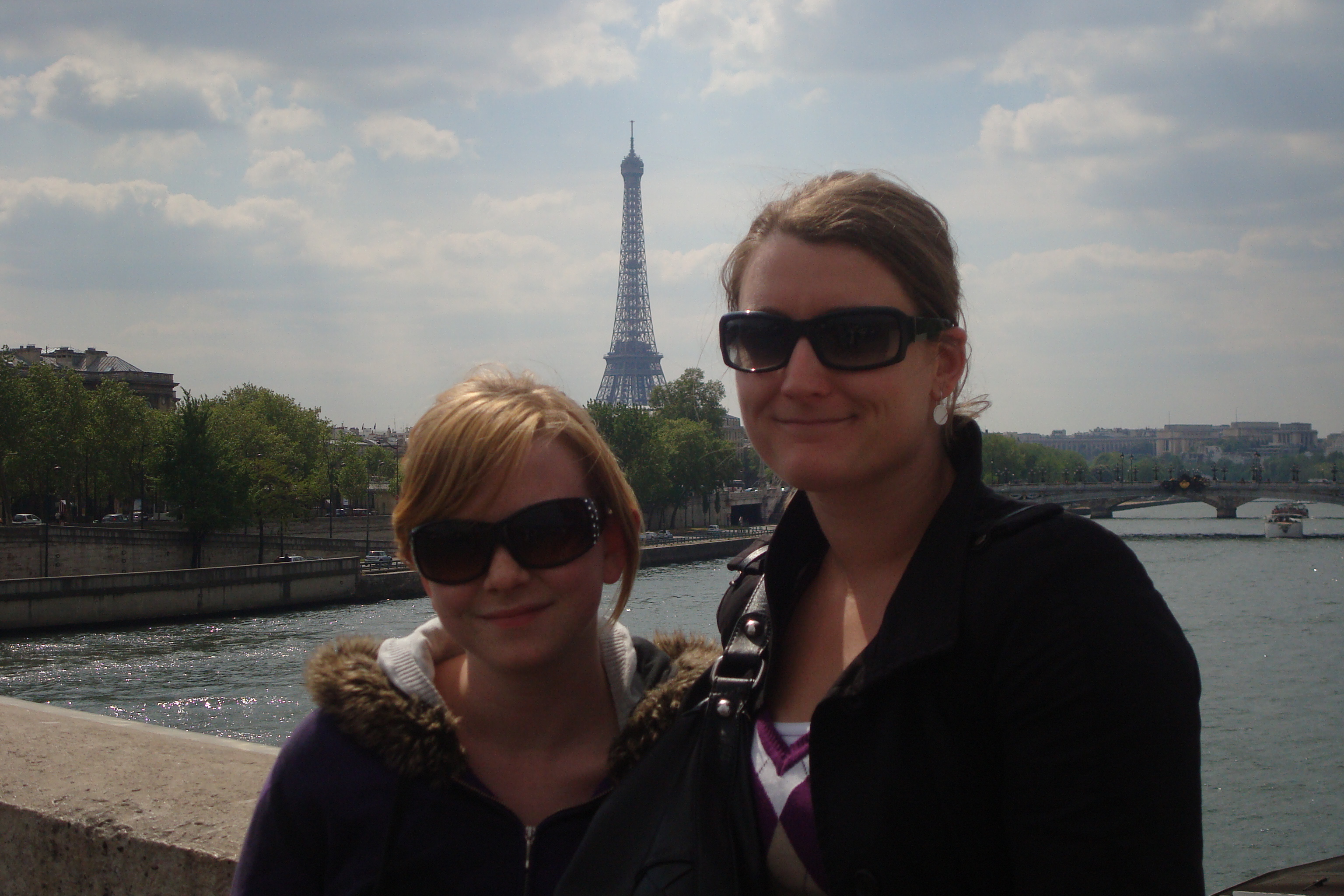 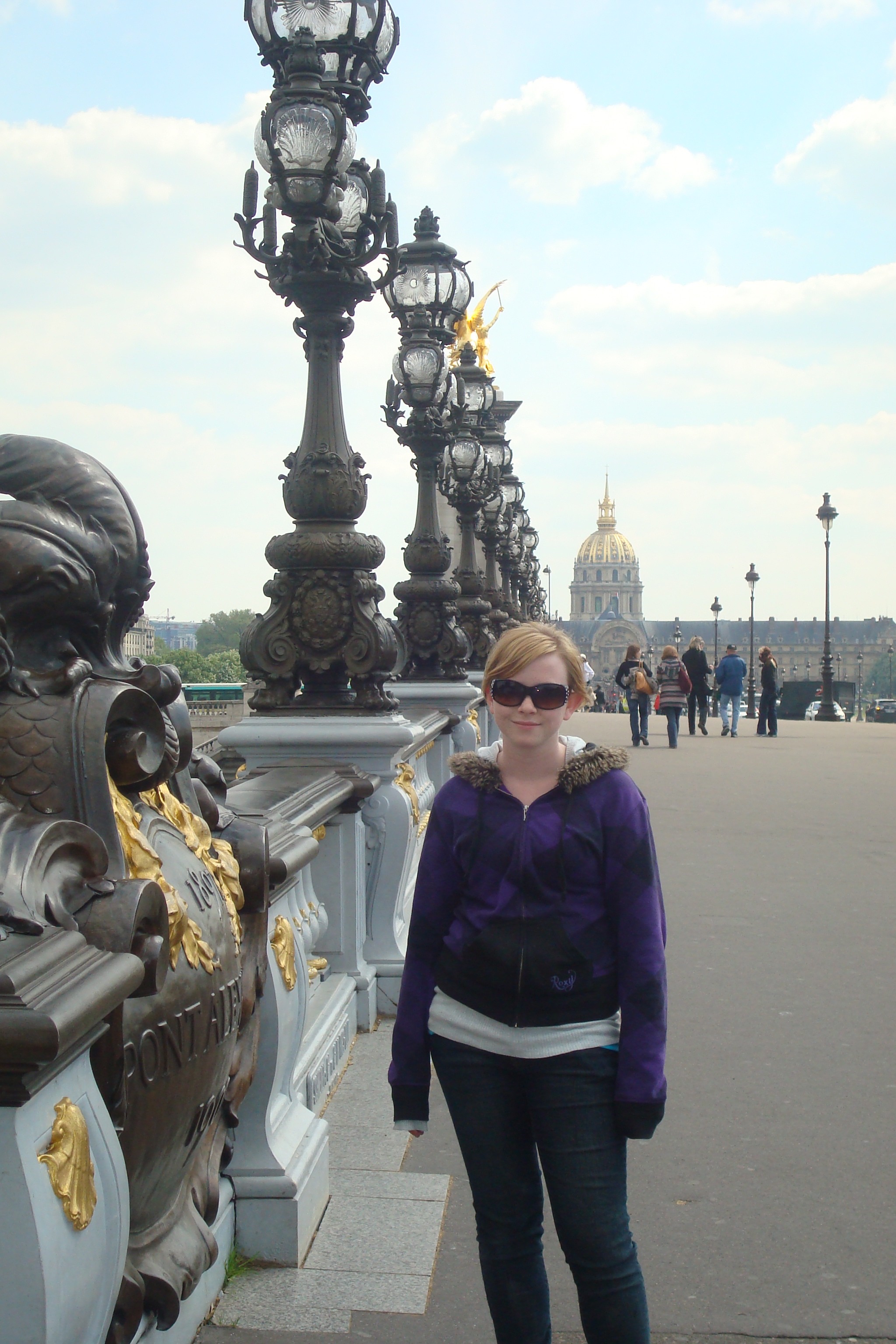 As we approached the base of the Eiffel Tower, we saw the line of people waiting to go up to the top viewing area. We debated for a few minutes if we wanted to wait in the long line or come back the next day. In those few fateful minutes, the number of people in line somehow magically multiplied by ten. It now snaked around the corner and out of sight from where we stood. Our decision? Go across the street and take pictures of the Eiffel Tower and not waste precious Paris time standing in a line. 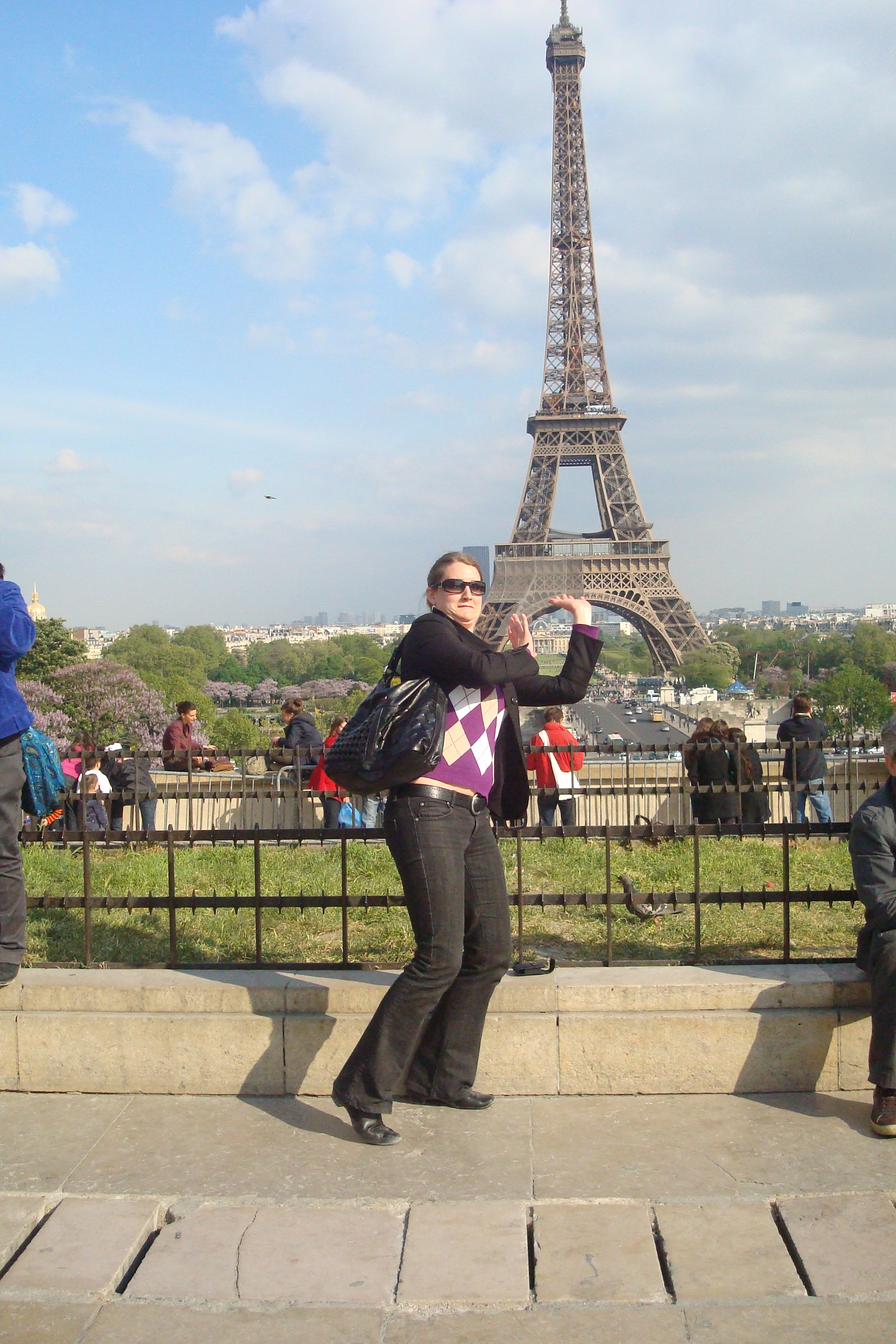 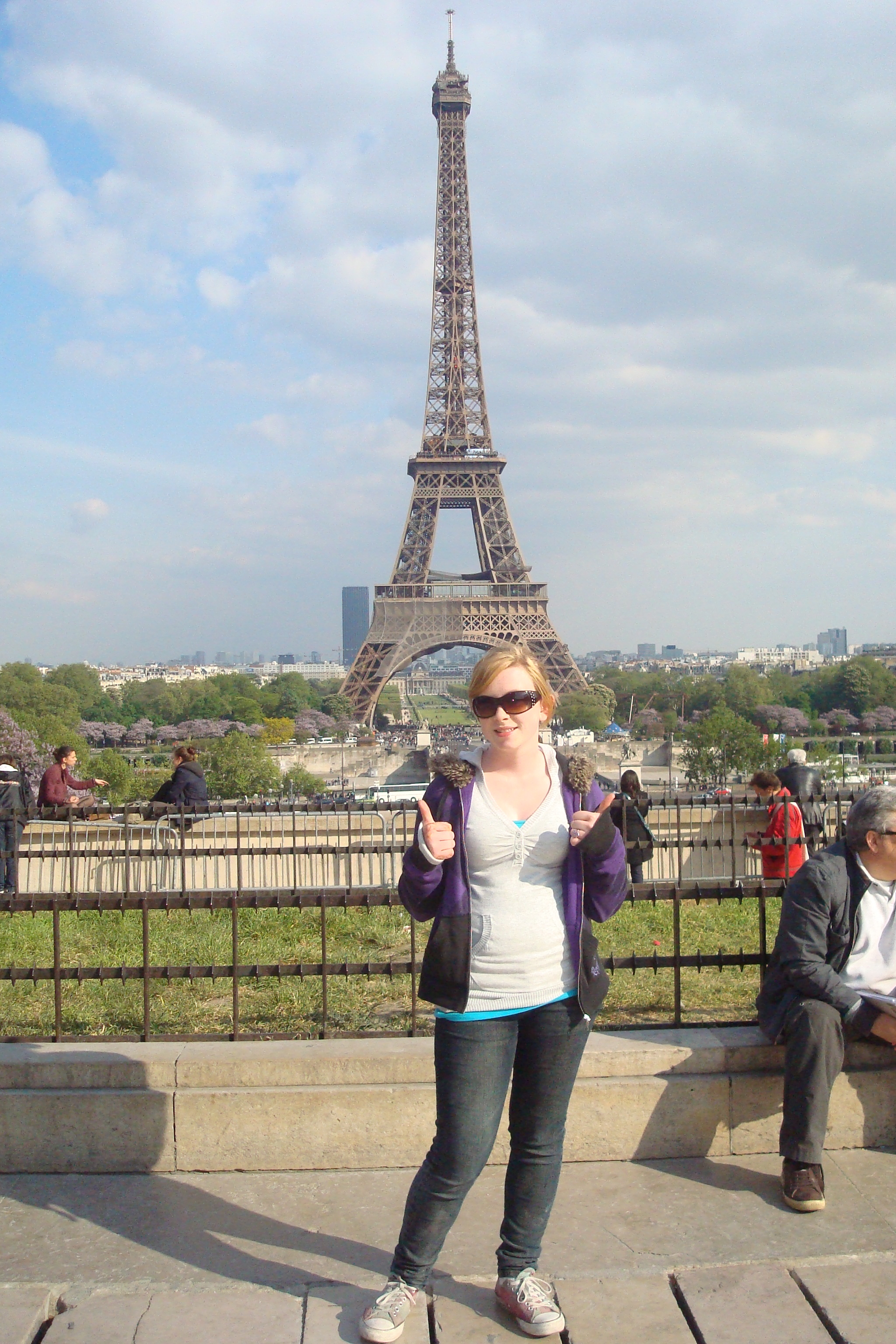 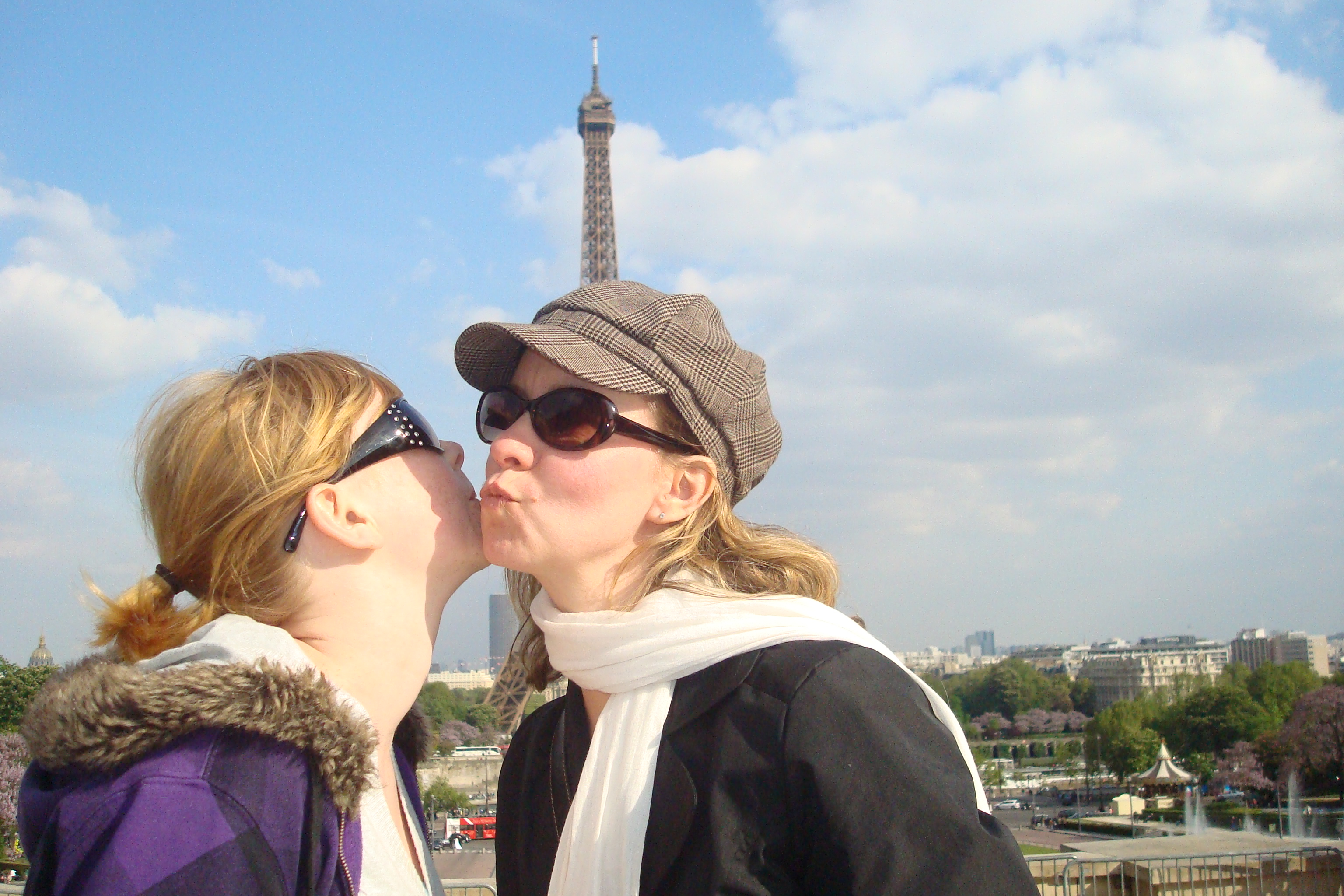 As great as it would have been to go up in the tower, I think we had more fun this way.

That evening, we decided to go to the Sacre Coeur and wander the streets of the neighborhood surrounding it. The Sacre Coeur Basilica, or Basilique du Sacré-Cœur, sits atop the butte Montmartre, the highest point in Paris. Construction began in 1875 and was finished in 1914.

Once you’ve climbed the hill and up the steps, you enter a very quiet, serene place of worship that’s in stark contrast to the loud, boisterous groups of people hanging out on the steps outside. 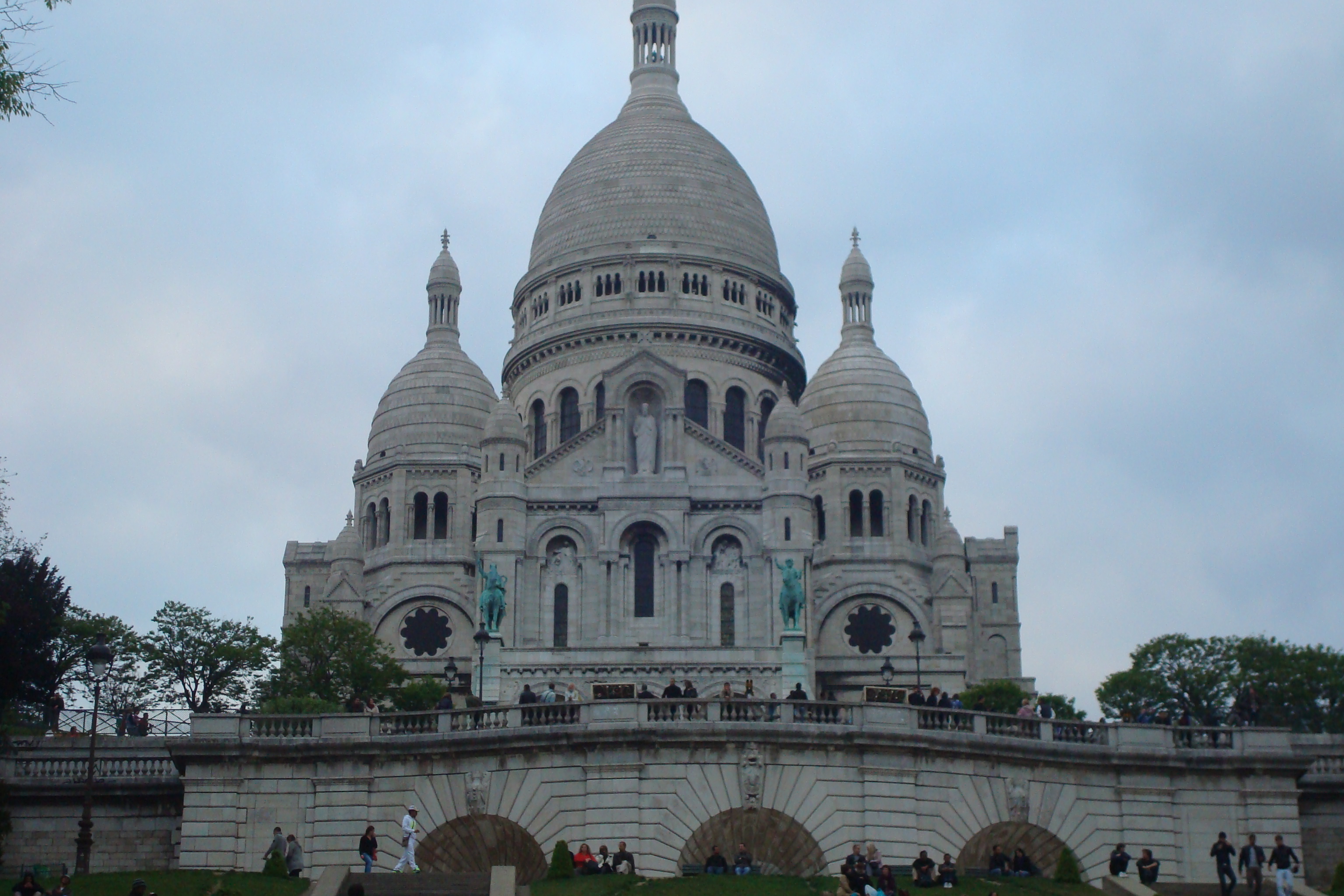 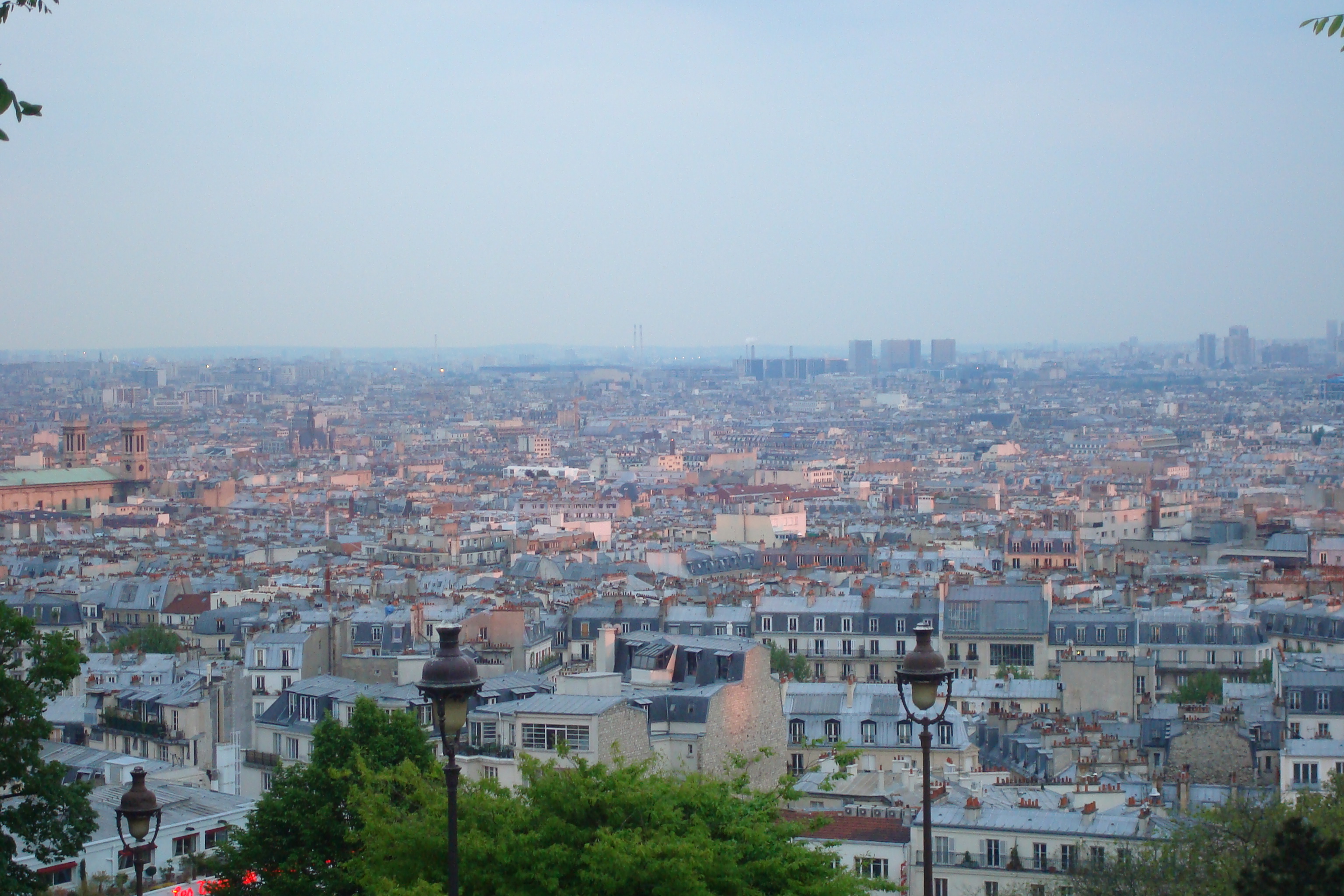 The Montmartre neighborhood that surrounds Sacre Coeur is likened to Greenwich Village in New York City. Once a haven for artists seeking cheap rent and a community of other creatives, many now lament Montmartre’s shift to a place where few artists can afford to live and the overpriced tourist traps that skirt its edges. But as we wandered around the streets, it was obvious there was so much more to this area than what I’d read or heard so far. I made another mental note (among the many I had made so far on this journey) to return to Paris some day to more properly explore neighborhoods like Montmartre.

The next day brought lots of warm sunshine (which was very welcomed since it had been raining off and on in both Germany and in Paris for the last several days) and with it a day of shopping as promised to the teenager. Of course, we had to walk down the Avenue des Champs-Élysées, the famous avenue lined with cinemas, cafés and restaurants, and luxury specialty shops. Window shopping was about the only thing in our budgets on the Champs-Élysées but it was fun to do nonetheless. 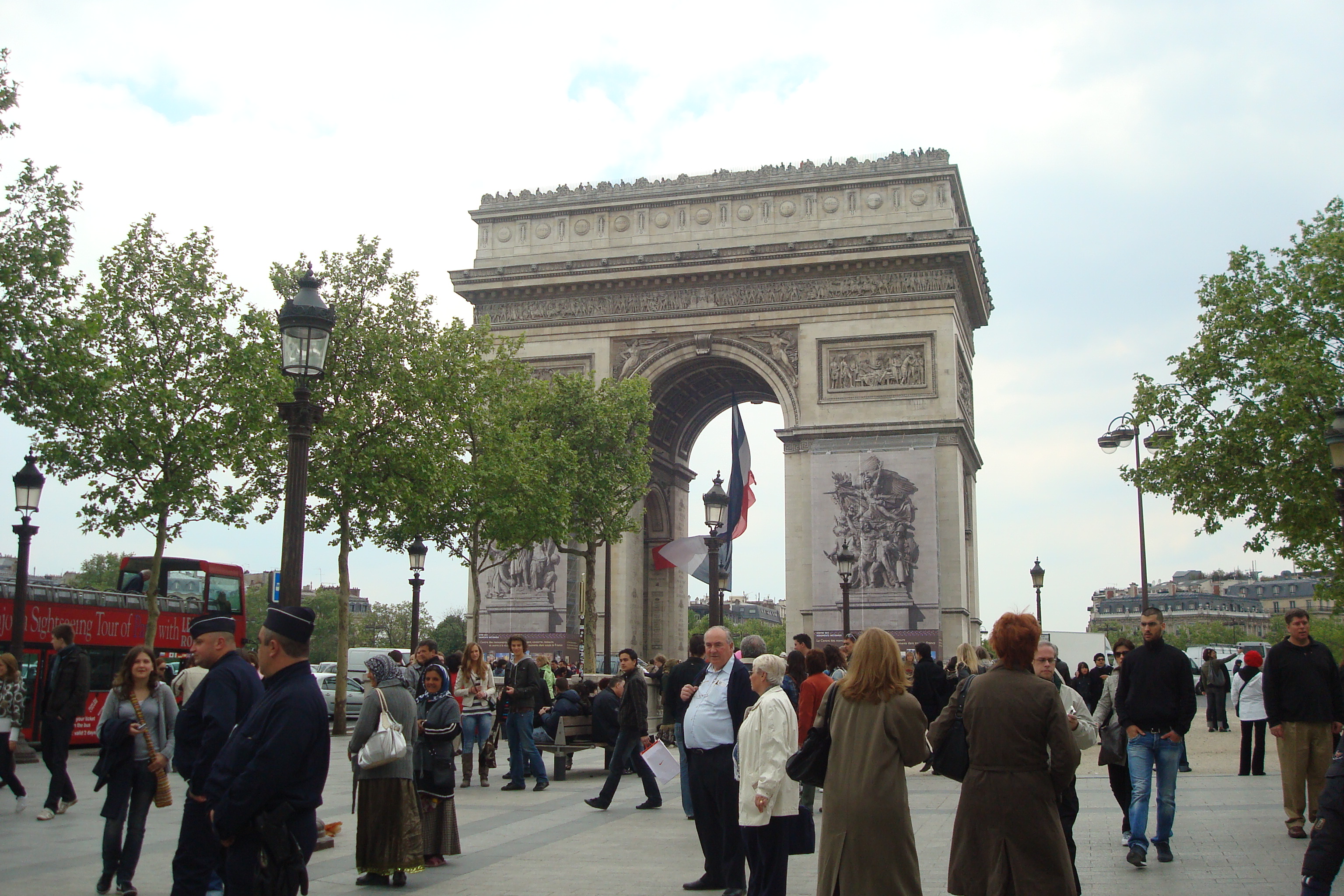 The Champs-Élysées ends at the Arc de Triomphe, built to honor the victories of Napoleon. If you’re willing to climb all of the stairs to the top, you are rewarded with a glorious view of the city. 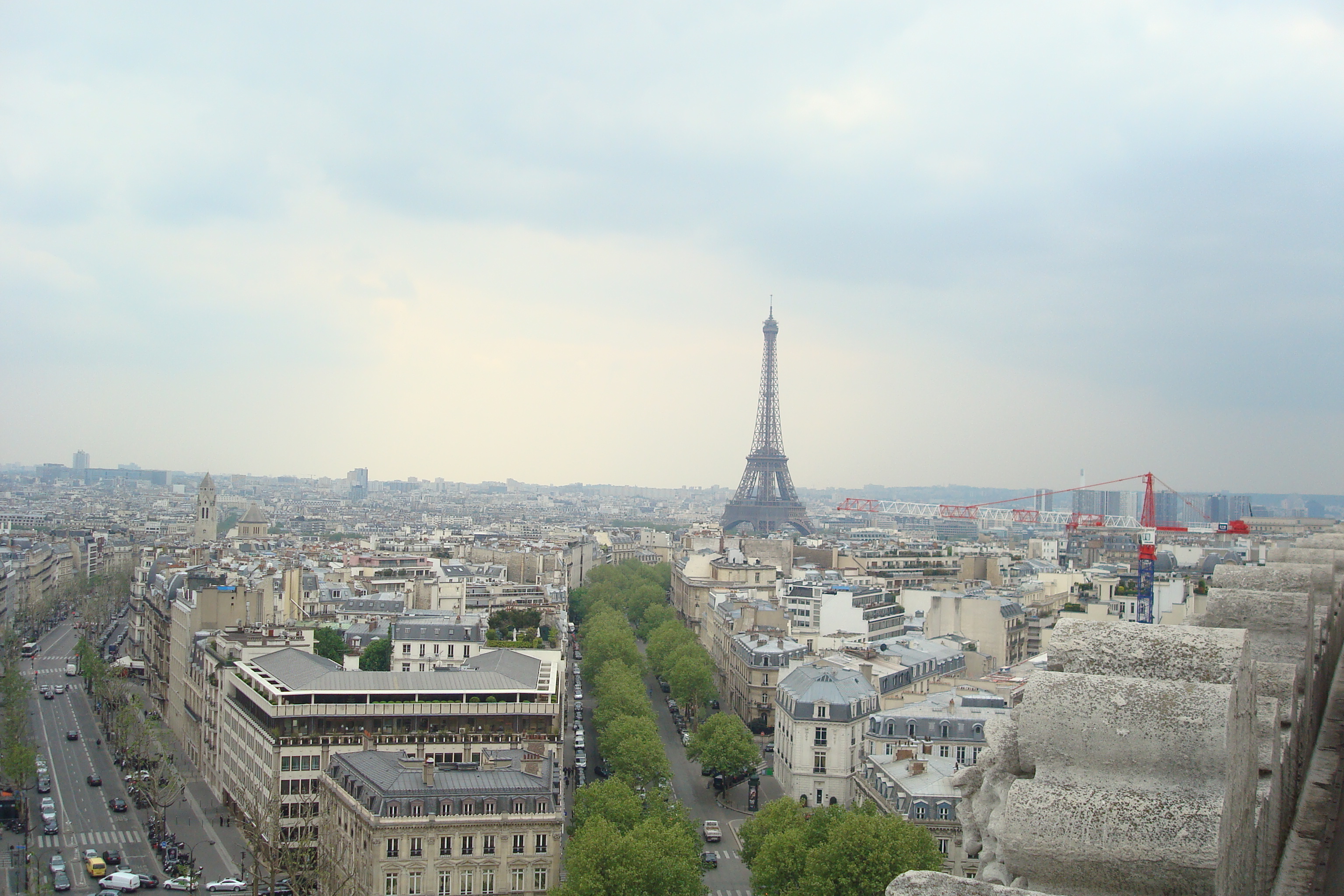 It was nearing the time to return to the train station and head back to St. Wendel. One last meal in Paris meant one more chance to sit outside at a cafe and take in the Parisian vibe as we pretended we did that sort of thing everyday. 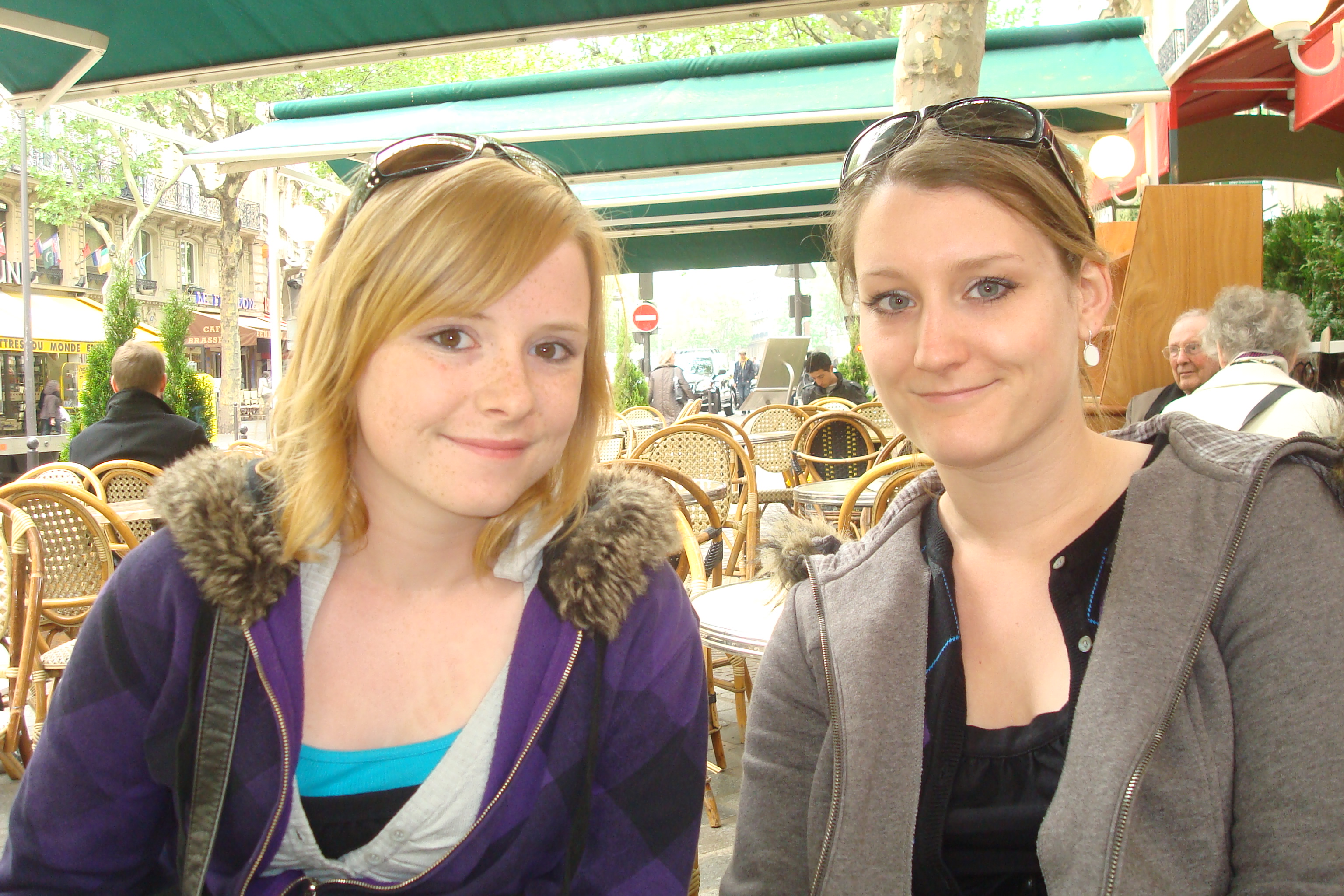 Did Paris measure up to my romantic ideas and iconic notions? It most certainly did. Paris is definitely on my list of places to return to when I have more time to explore it properly. We only had time for “Paris Lite”; I’ll return to the City of Light when I can do a more thorough exploration of it, most likely avoiding many of the touristy places now that I’ve been there, done that.

And I completely agree with Audrey Hepburn in Sabrina:

Paris is always a good idea.

Have any of you wanted to go to Paris? Anyone been to the City of Light? Any Parisian stories to share? Come sit in the kasbah and share!

22 thoughts on “Paris Is Always a Good Idea”

← Letters from Benedict: On Secrets, Angst & The Long Wait