Letters from Benedict: On Secrets, Angst & The Long Wait→ 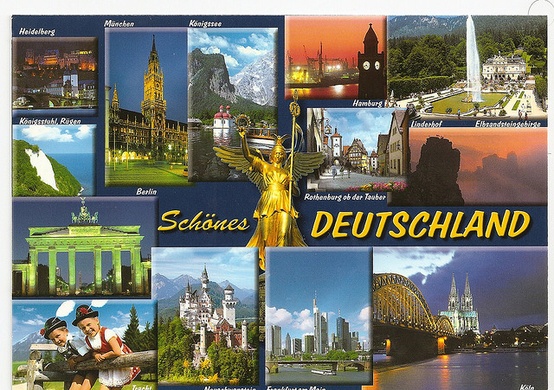 Just a few of the many beautiful sights to be seen in Germany. Source: flickr.com via Tami on Pinterest

I met my dear friend, Anne, by chance in 2002 when she traveled from her native Germany to the U.S. at the tender age of seventeen. She was participating in a two-week student exchange program with one of our local high schools. A neighbor (who was hosting a German exchange student from the same program) came to us one evening and asked if we might be able to help out another exchange student who was in need of a place to stay because her initial place wasn’t working out. We were glad to help and welcomed her into our home for the remainder of her program. Little did we know then that a long-lasting friendship was in the making.

We did our best to entertain Anne and show her around our town and Portland. Her parents profusely thanked us on the phone for letting her stay in our home. We didn’t feel like we were due any such thanks and in all honesty felt like we were getting more out of the deal than Anne. I had always wanted to host an exchange student when I was in high school but it was never a possibility for my family. And now here I was getting the chance to do it, albeit 13 years later. I loved hosting her and was incredibly impressed by the multiple languages (English, French, Spanish, Italian) she could speak with relative fluency. I enjoyed hearing about her life back in Germany and hoped to visit her there one day.

The two weeks flew by and before we knew it, the time had come for us to say good-bye to our German guest. 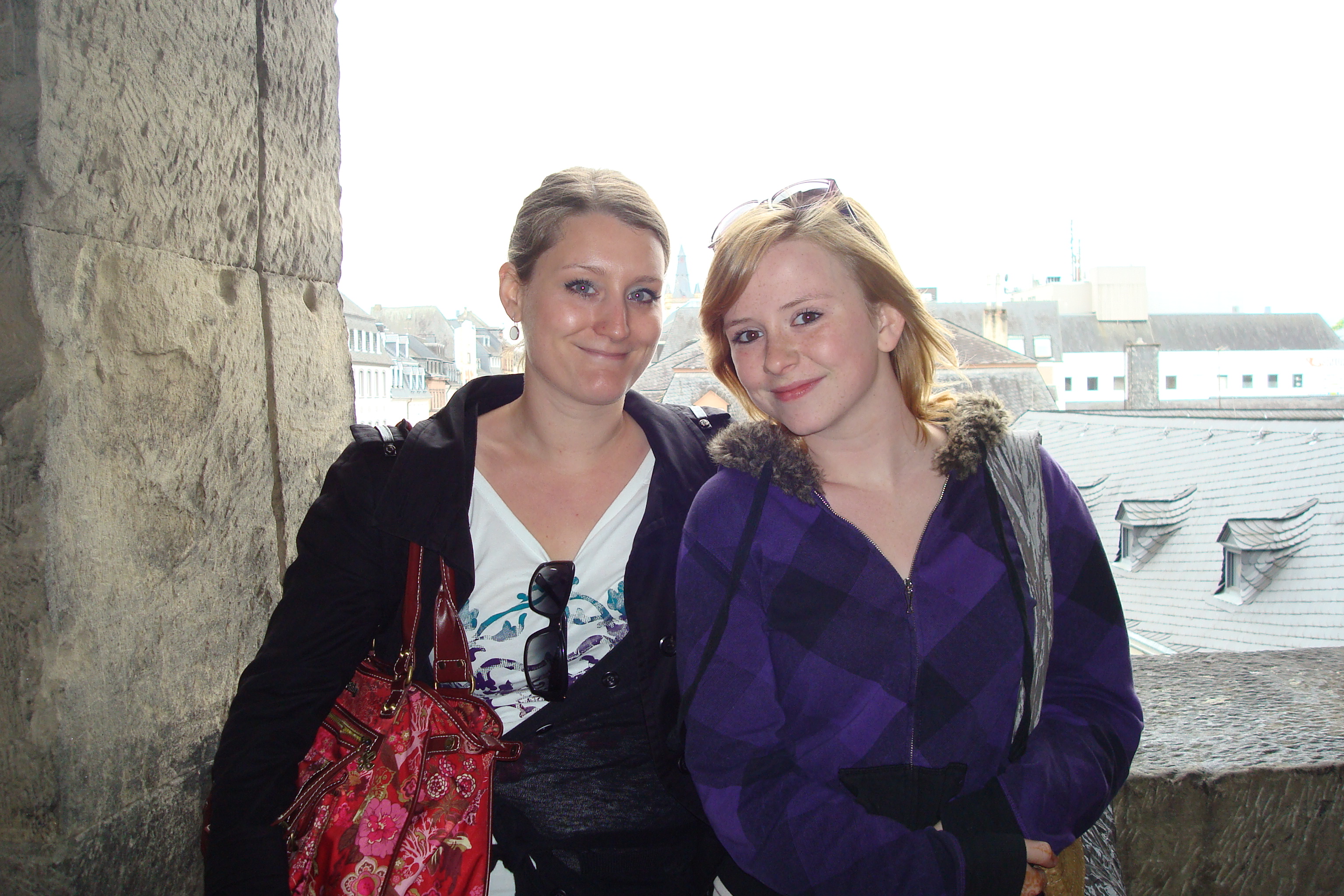 Anne and my daughter

In the intervening years, we kept in touch with her and her with us. Many letters, emails, and packages went back and forth between us. It has been a friendship that has spanned a decade and many, many miles. Anne came back to visit us following her graduation from high school in 2004 and then again last spring following the completion of her studies from University.

She and her family have extended numerous invitations for us to visit them in Germany, but it wasn’t until I began planning our trip to Morocco in 2010 that actually making it there was in the realm of possibility. Morocco is just a hop, skip and a ferry ride from Spain which is right next to France which borders Germany. Easy peasy, right? And since we were already going all that way, I knew we had to make a stop over in Germany to see Anne.

So, only eight years and a short flight from Madrid later, my daughter and I arrived in Frankfurt where Anne welcomed us with open arms. We had finally made it to Germany!

Anne lives in the small town of St. Wendel near the French border. (Paris is just a quick three-hour train ride away so we also planned to make a two-day trip there during our stay in Germany. More on that in a future post.)

St. Wendel is in Saarbrucken in the far southwest corner near the French border

For our first full day in Germany, Anne and her father, Hermann-Josef, took us to Trier (the oldest town in Germany) and then on a driving tour of the picturesque Mosel wine region of western Germany. On our way out of town, we stopped off to pick up Anne’s uncle and then made our way on the Autobahn to the lovely town of Trier. 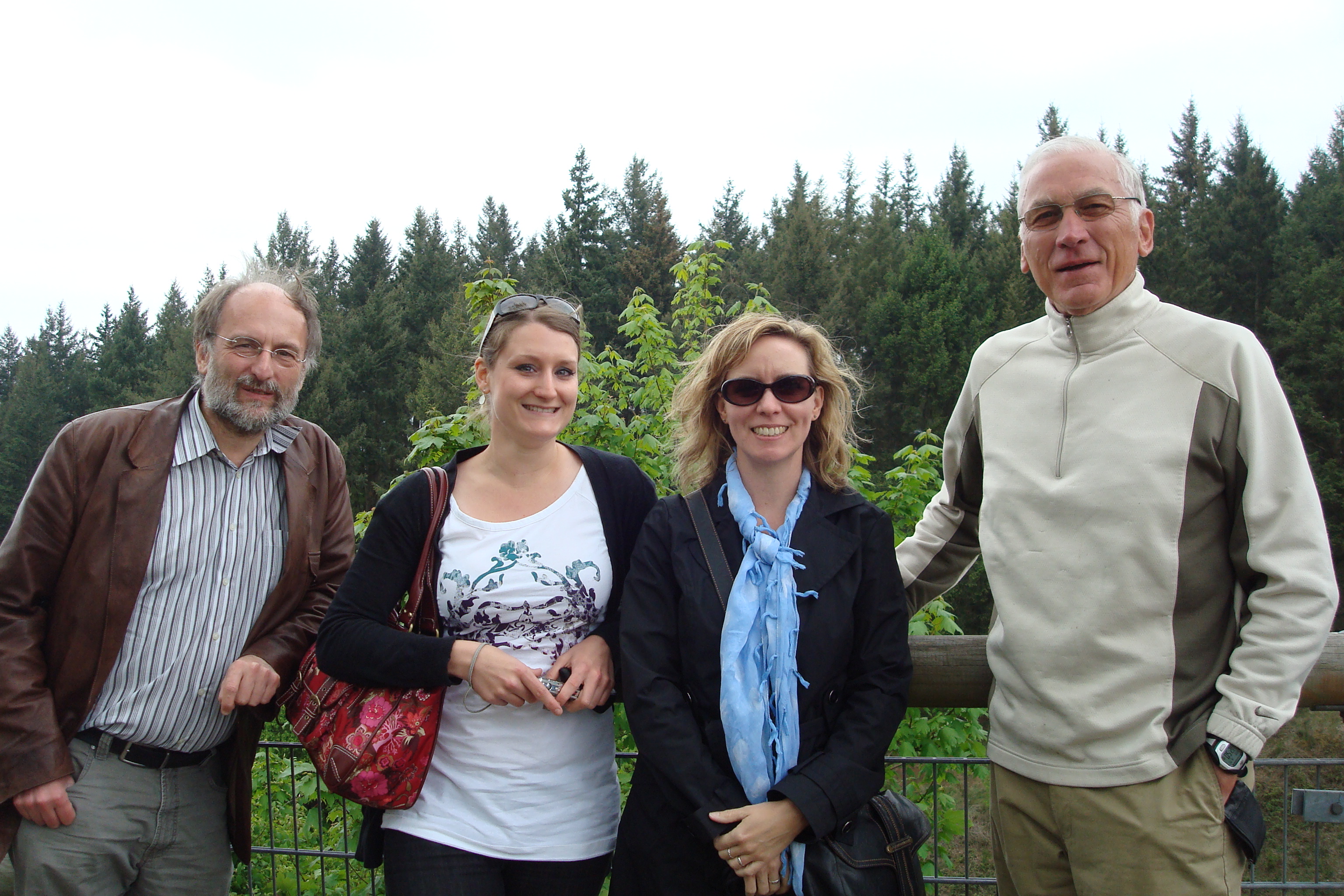 Hermann-Josef, Anne, me, and Anne’s Uncle

The town of Trier is known for being the oldest established town in Germany as well as for the Roman ruin, the Porta Nigra, or Black Gate, which stands sentry at the entrance to the town. 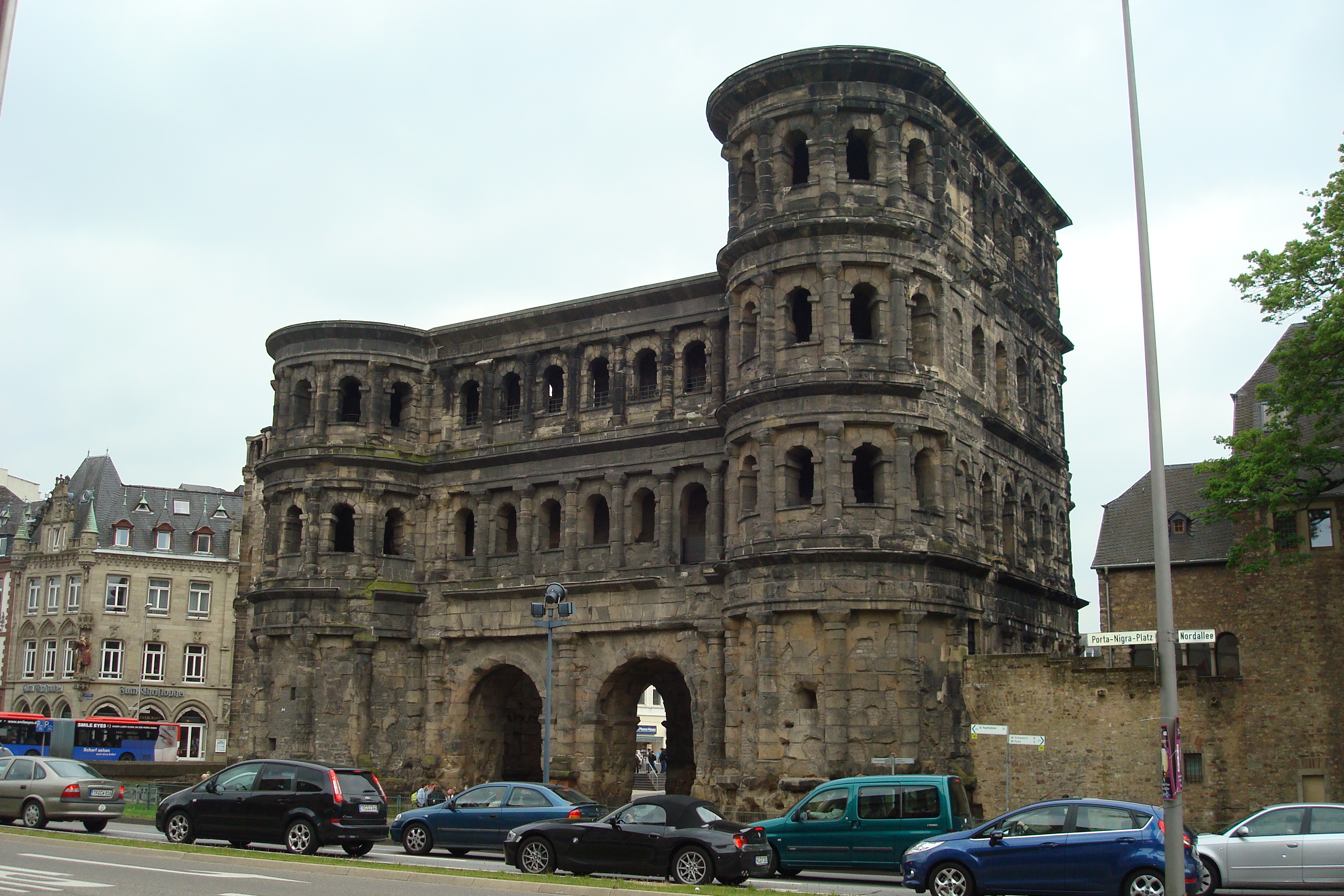 I, of course, loved that we could go inside the Porta Nigra and walk around while touching the walls of the ancient monument. No ropes or barriers for this wannabe archaeologist! I’m sure my staring at the stone work and petting of the walls looked strange to the other visitors but since we don’t have things quite this old in the US for me to experience, I had to take my opportunities when I could. 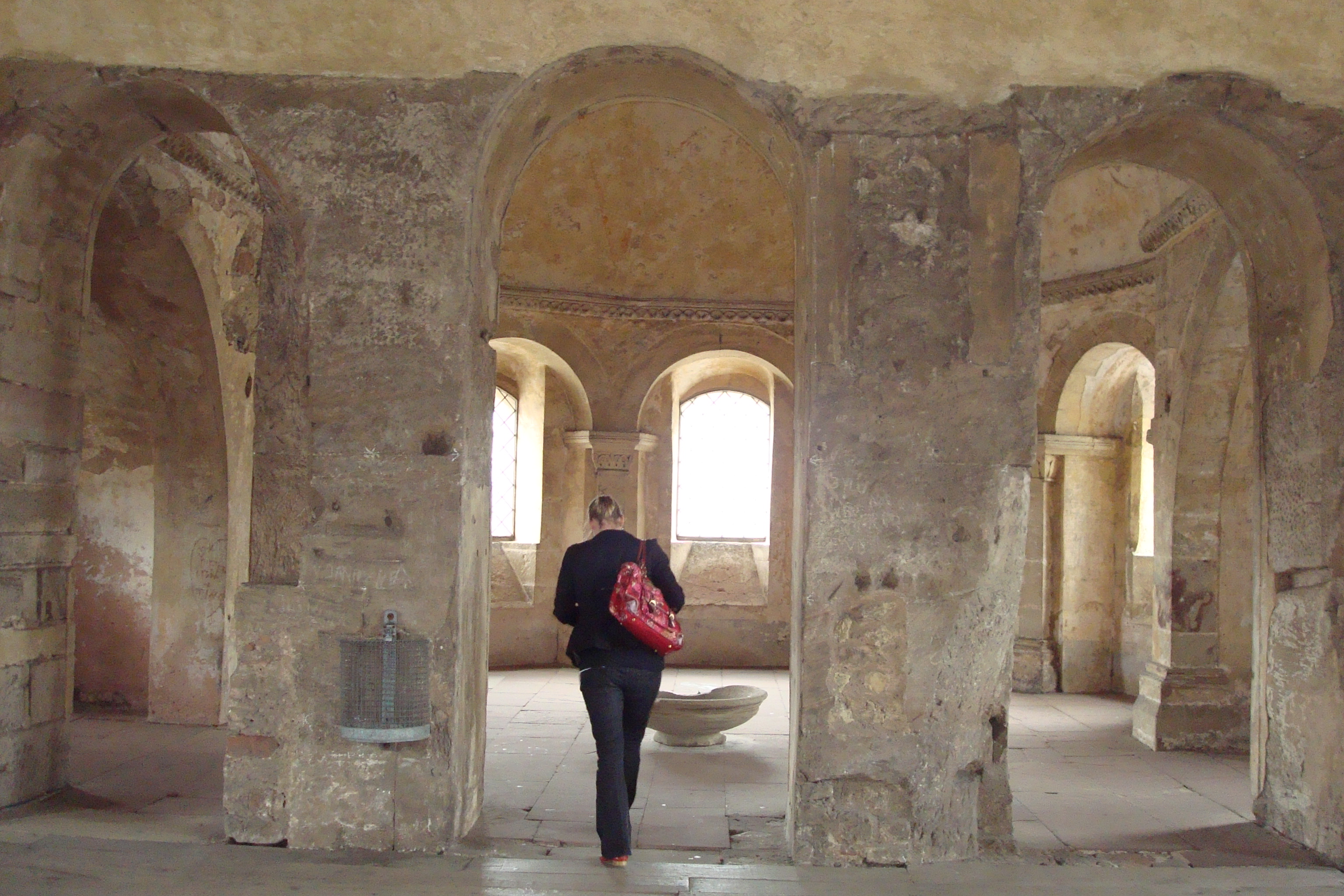 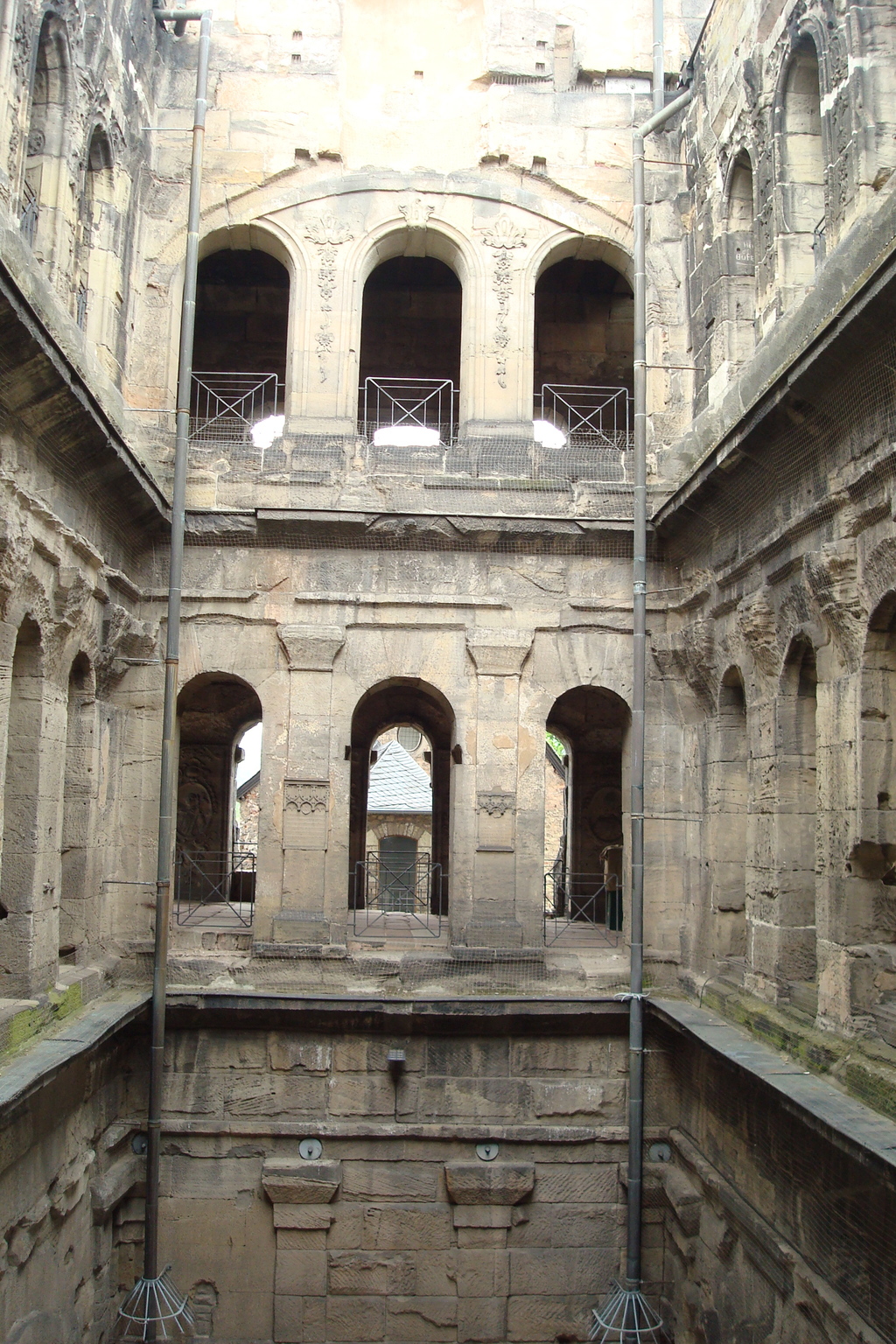 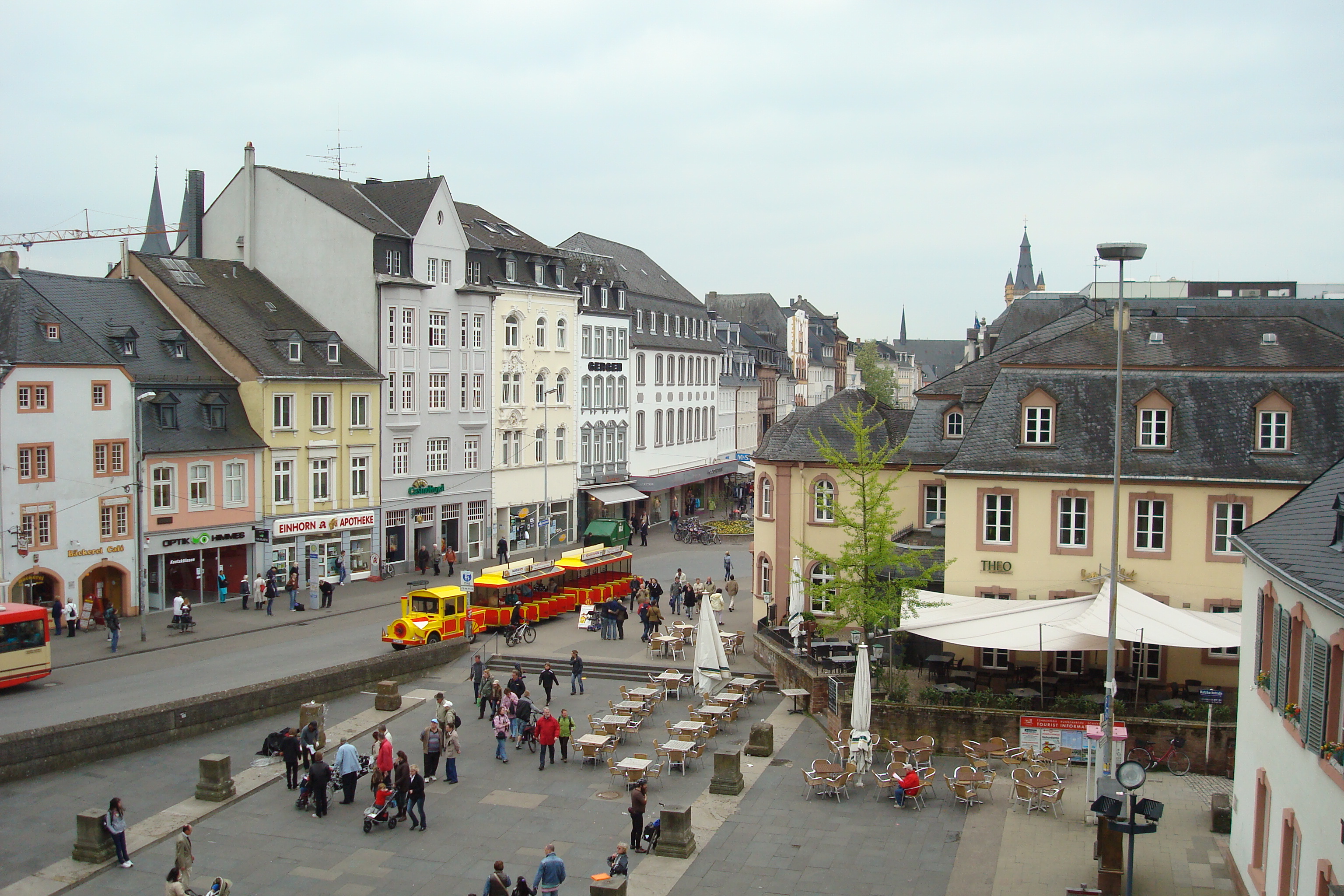 A view of the shops and cafes of Trier, taken from inside the Porta Nigra

When I was done fondling the ancient stones of the Porta Nigra, we walked through the neat and tidy streets of Trier, making our way over to the Cathedral of St. Peter, the Trierer Dom. 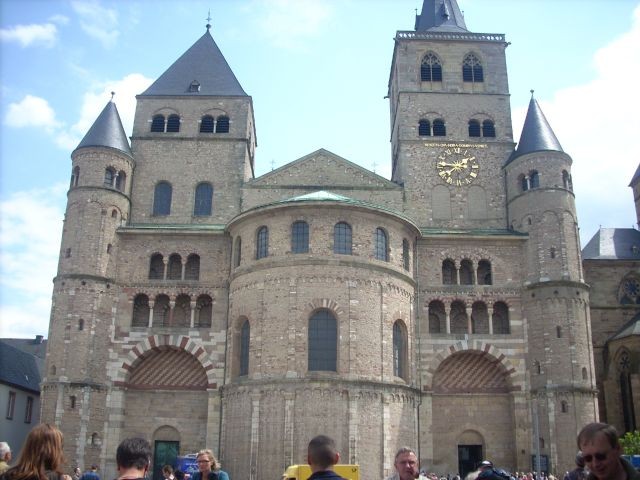 The Trierer Dom. This is a much better photo than the one I took. Photo credit ~ www.traveljournals.not

The Dom, as it’s called, is the oldest cathedral in Germany as one might expect since it resides in the oldest town in Germany. It was built in the 4th century over the foundations of buildings of the Roman city of Augusta Trevororum (founded in 30 BC). 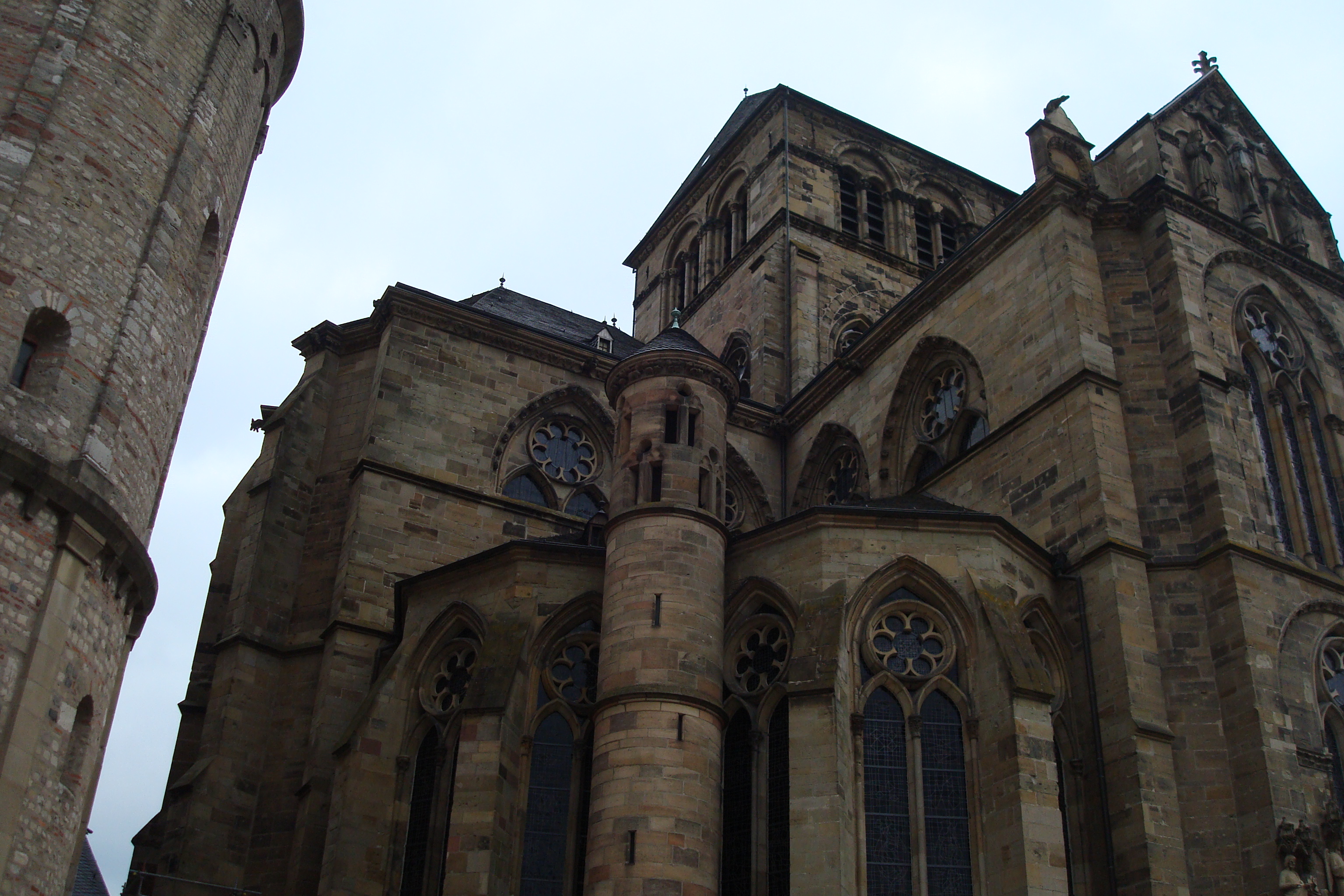 Anne’s father has an abundance of knowledge of church edifices and sculptures and shared with me the significance and meaning behind much of the architectural decorations. I found it fascinating; Anne, who has heard these stories many times before, and my daughter, who wasn’t really into architecture or churches to begin with, wandered off on their own. Even though Hermann-Josef doesn’t speak much English and I don’t speak German very well, we found a way to communicate (with some translation help from Anne from time to time).

Unfortunately, it was at this point that my camera battery died and I don’t have any photos of my own the interior of the church or the rest of the day as we went on a wine tasting spree in the Mosel region. 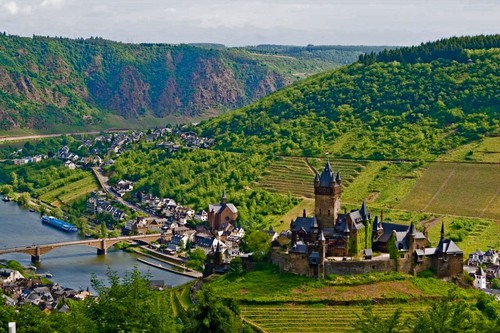 The Mosel wine region of Germany is lush, green and full of tiny little villages, all with their signature wines (mainly white) for you to taste. One place we stopped before heading to dinner at the winery (where we met up with Anne’s aunt and cousins) was a centuries-old building that housed a pub and wine bar. The unique thing about this building is that it was literally as wide as my outstretched arms could reach (and mind you, I am a mere 5’4″). It was tiny, like something off the movie set of the Hobbit. A cozy fire burned in the fireplace and the proprietor was lively and entertaining, though I couldn’t understand much of what was being said since everyone was speaking in German. (Anne did translate some of it for us.)

The next day we were whisked off to the town of Heidelberg, a town that has a large population of Americans due to the close proximity to one of our military bases. The town is full of lovely shops and restaurants. 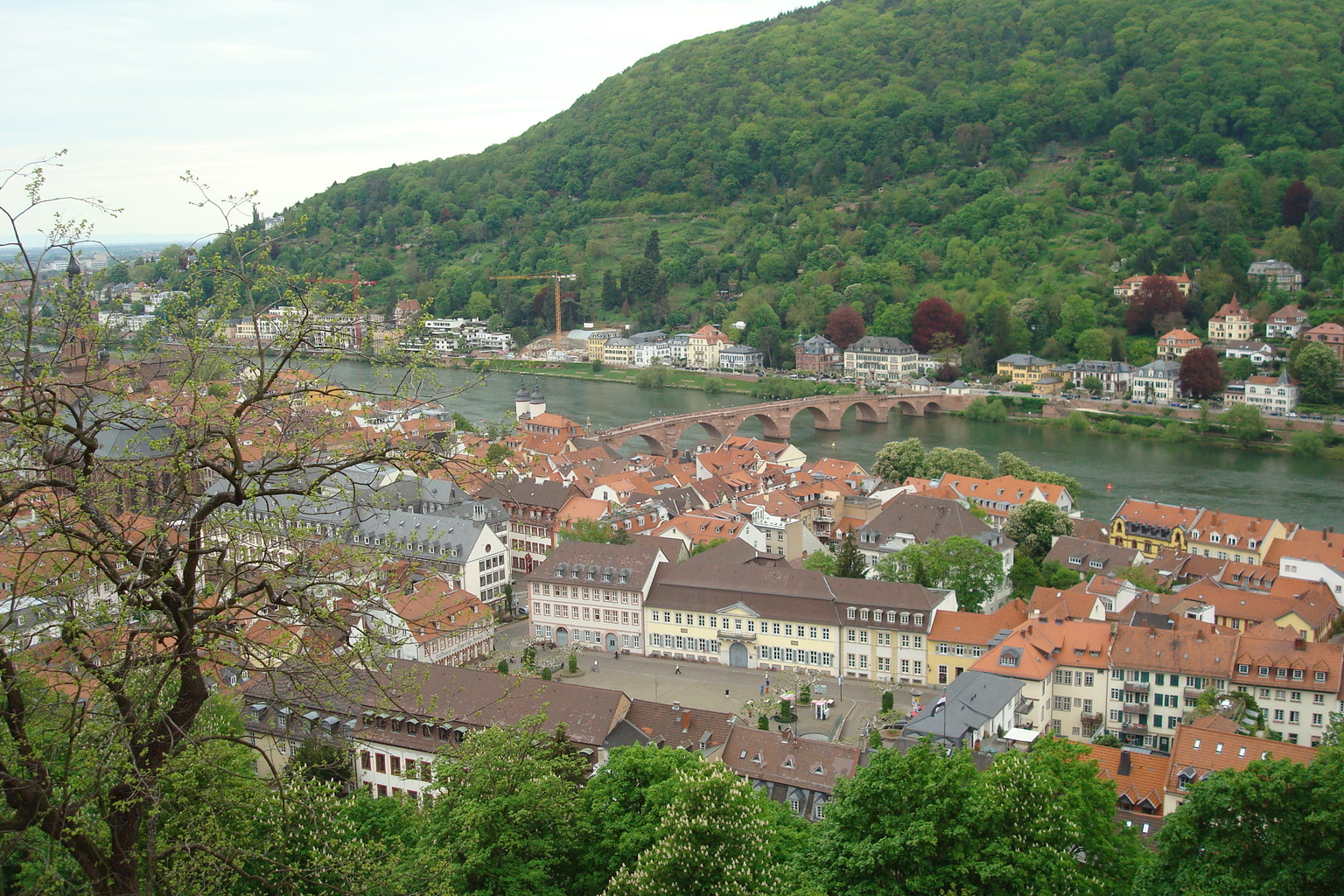 While there, we toured the Heidelberger Schloss, or Heidelberg Castle. The castle was first mentioned in 1214 when Ludwig I received it from Emperor Friedrich II, so this is generally accepted to be the rough estimate of the time it was built. Around 1294, it was expanded into two castles, the original being referred to as the Upper Castle and the second one referred to as the Lower Castle. The Upper Castle was destroyed in 1537 by a lightening bolt so all that remains today is the Lower Castle. 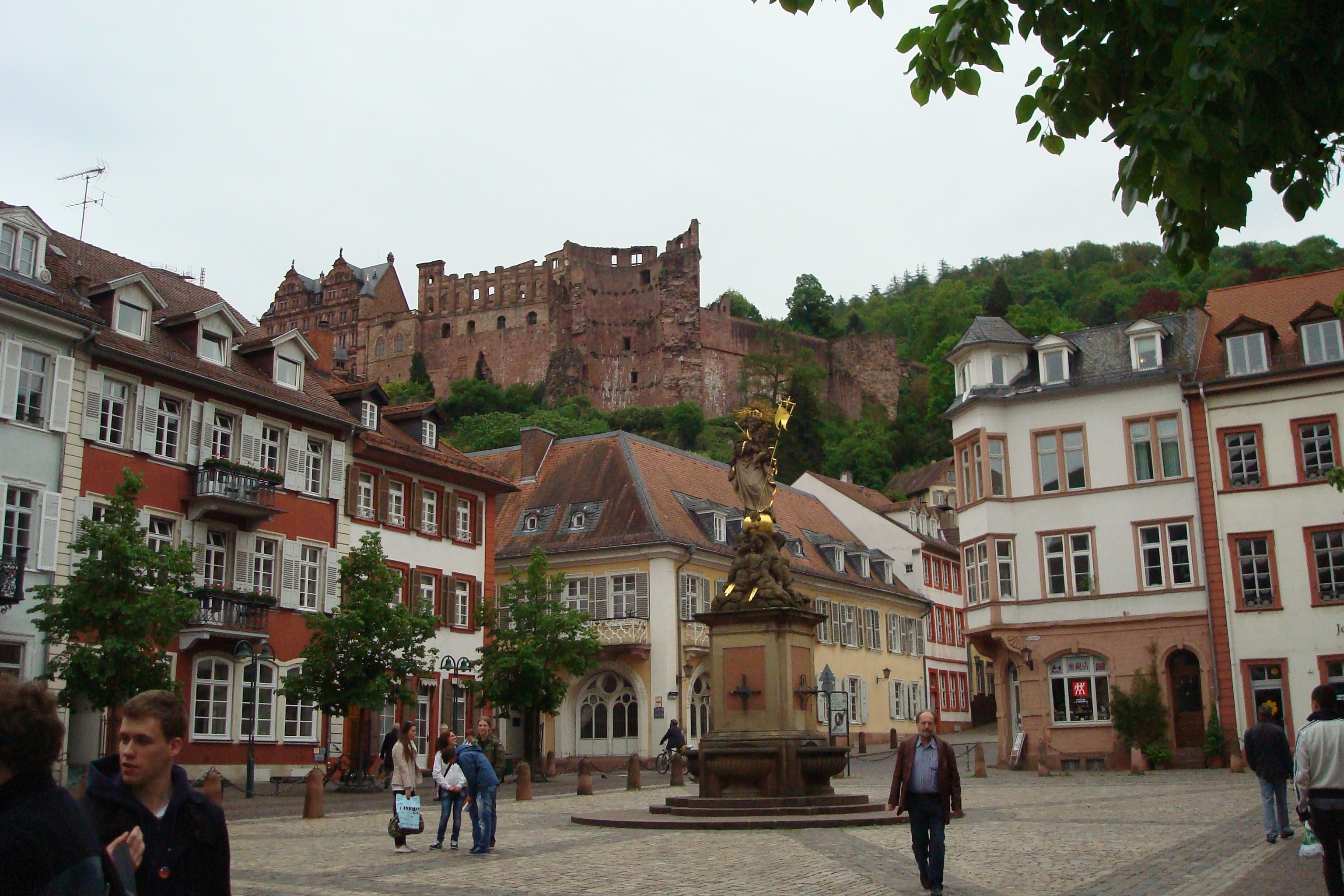 Heidelberg Castle up on the hilltop, as seen from the town square 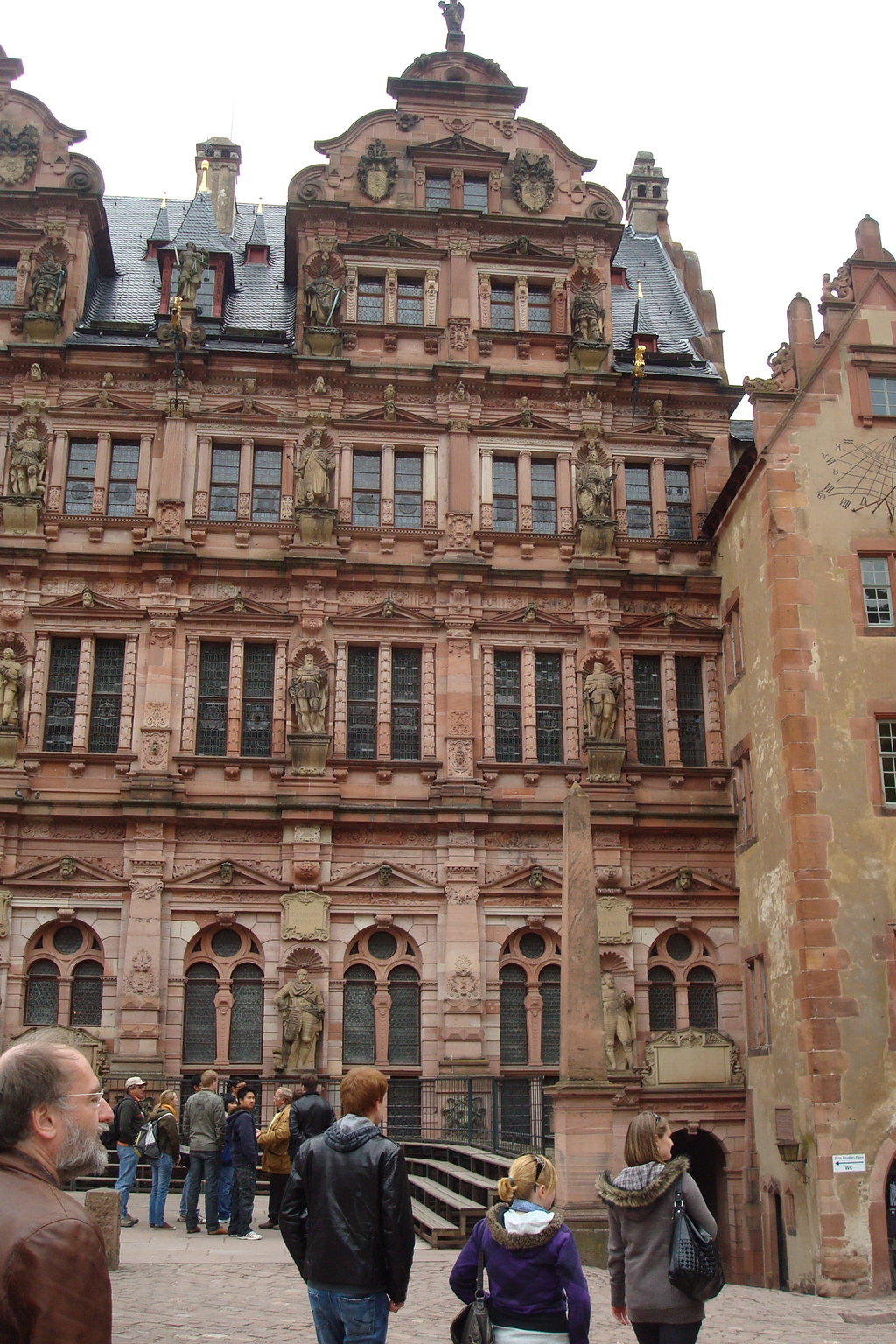 In front of the castle

Inside, more petting of ancient stones and artifacts ensued. We toured through some of the many rooms, including the town’s pharmacist’s room. 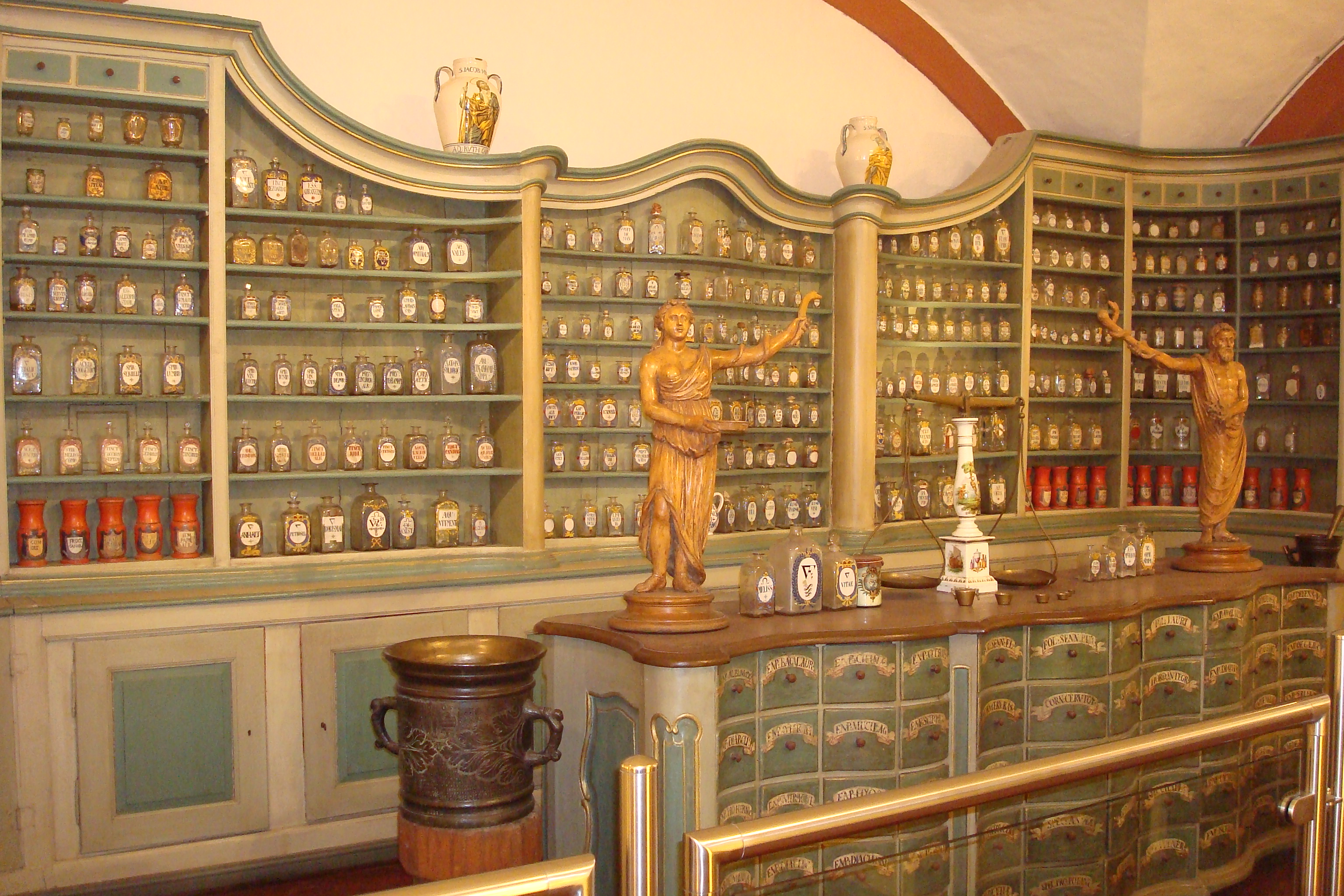 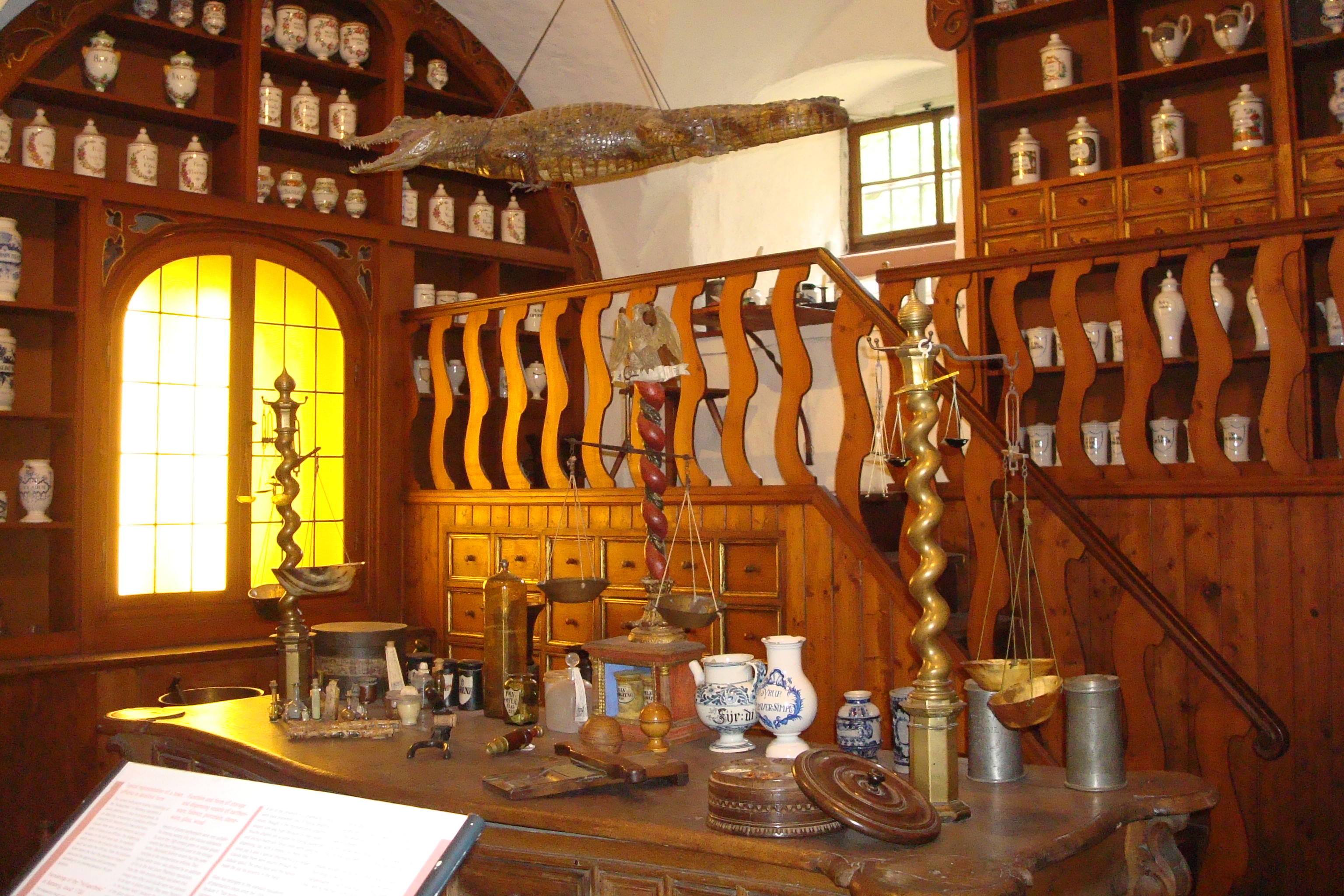 We also were able to walk through the cellar where the wine was made and stored. The castle is home to an incredibly huge wine casket that has its own set of stairs and balcony. 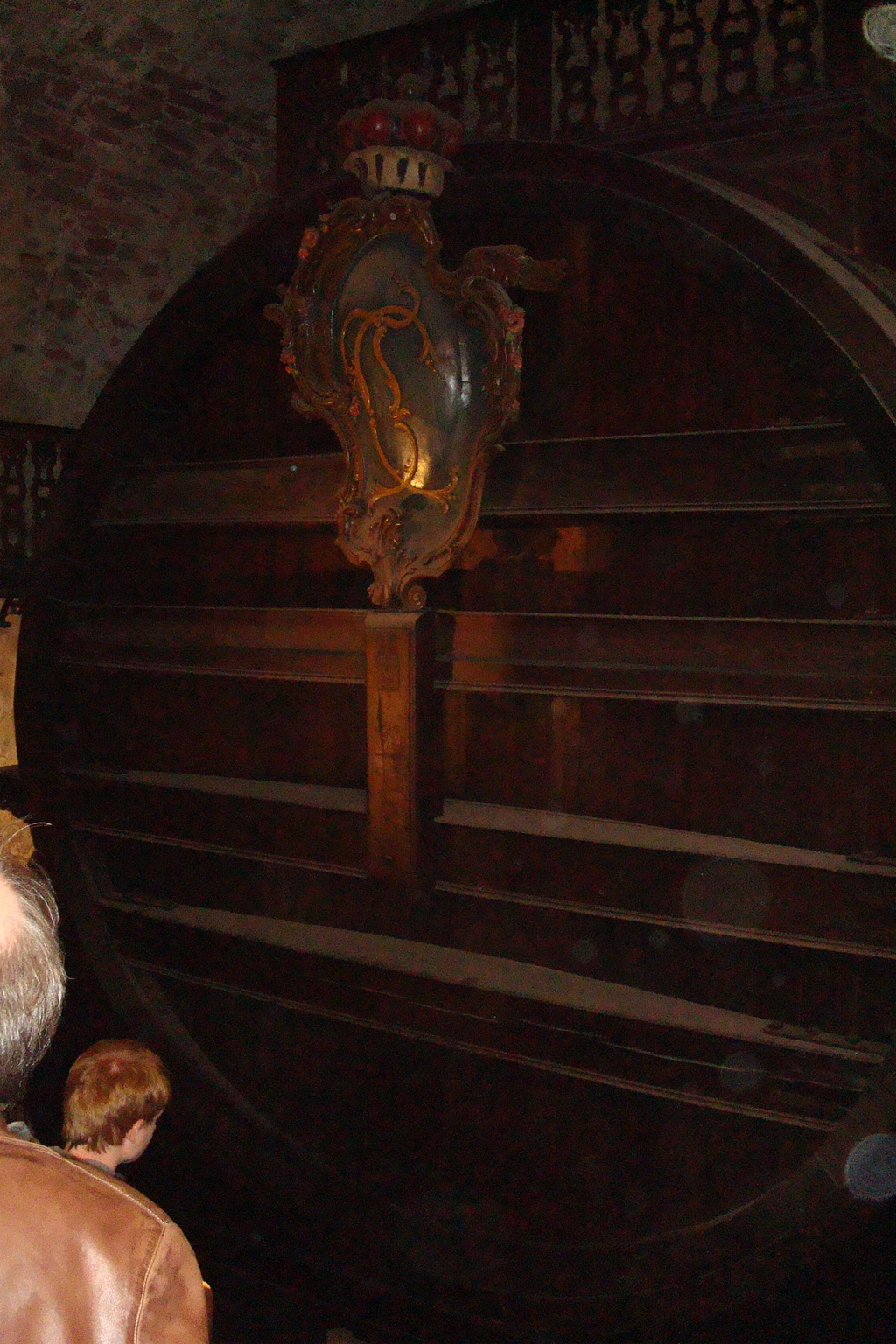 Those German rulers sure liked their wine. 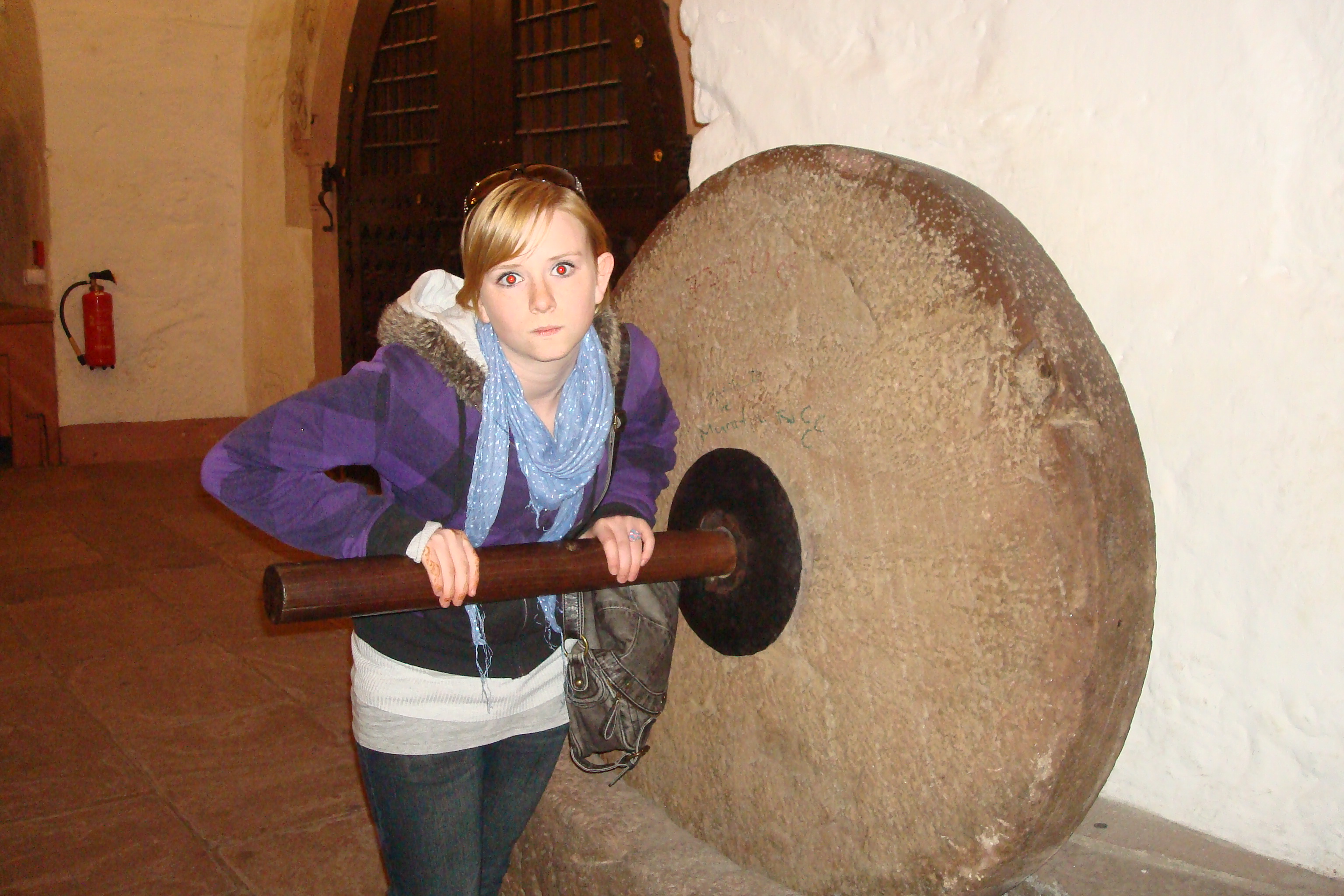 We spent the rest of the afternoon walking up and down the cobblestone streets of Heidelberg, sipping coffee, and slipping in and out of the little shops. Castles, coffee, and couture (o.k., not exactly) made for a great second day.

Since we had arrived in Germany, there hadn’t yet been time to explore Anne’s hometown of St. Wendel. So the next day we set out on foot to explore the town named after its patron saint, St. Wendelin of Trier.

St. Wendelin is reported to have lived in the area around 600 AD. When he died, pilgrims came to the area, known then as Basonisvillare, to worship at his grave at the local church throughout the 7th, 8th, and 9th centuries. The number of worshippers grew in such large numbers that the town was later renamed Sankt Wendel in honor of the patron saint.

On our walk through the town, we passed by the statue of St. Wendelin up on a pedestal holding what looked like a golden shovel in his hands. I asked Anne why he was featured with such an object and she replied that she wasn’t exactly sure except that he must also be the patron saint of golden shovels. Good enough for me. 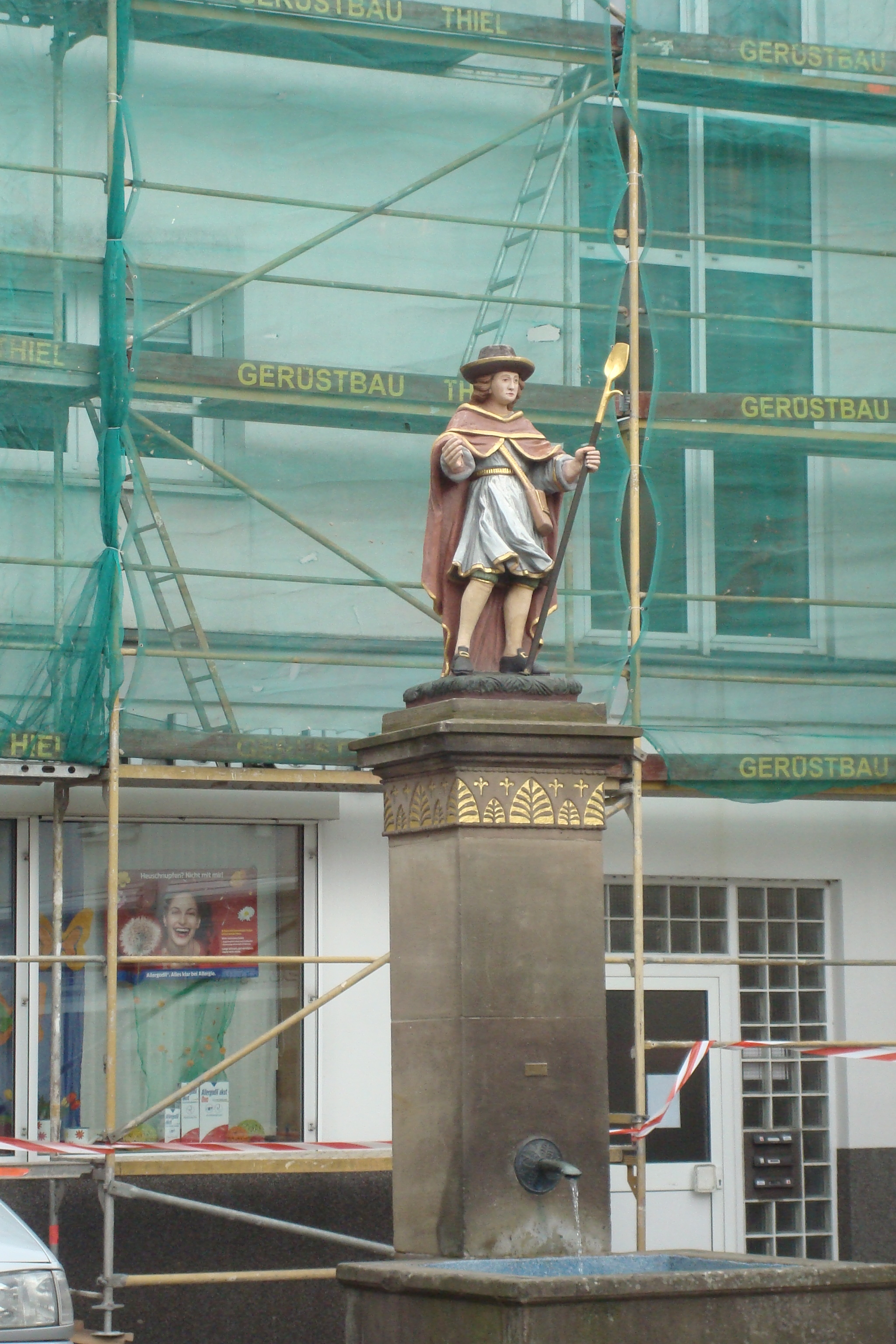 St. Wendel is a charming town with neatly laid out streets, quaint shops and bakeries and buildings older than many in the US. 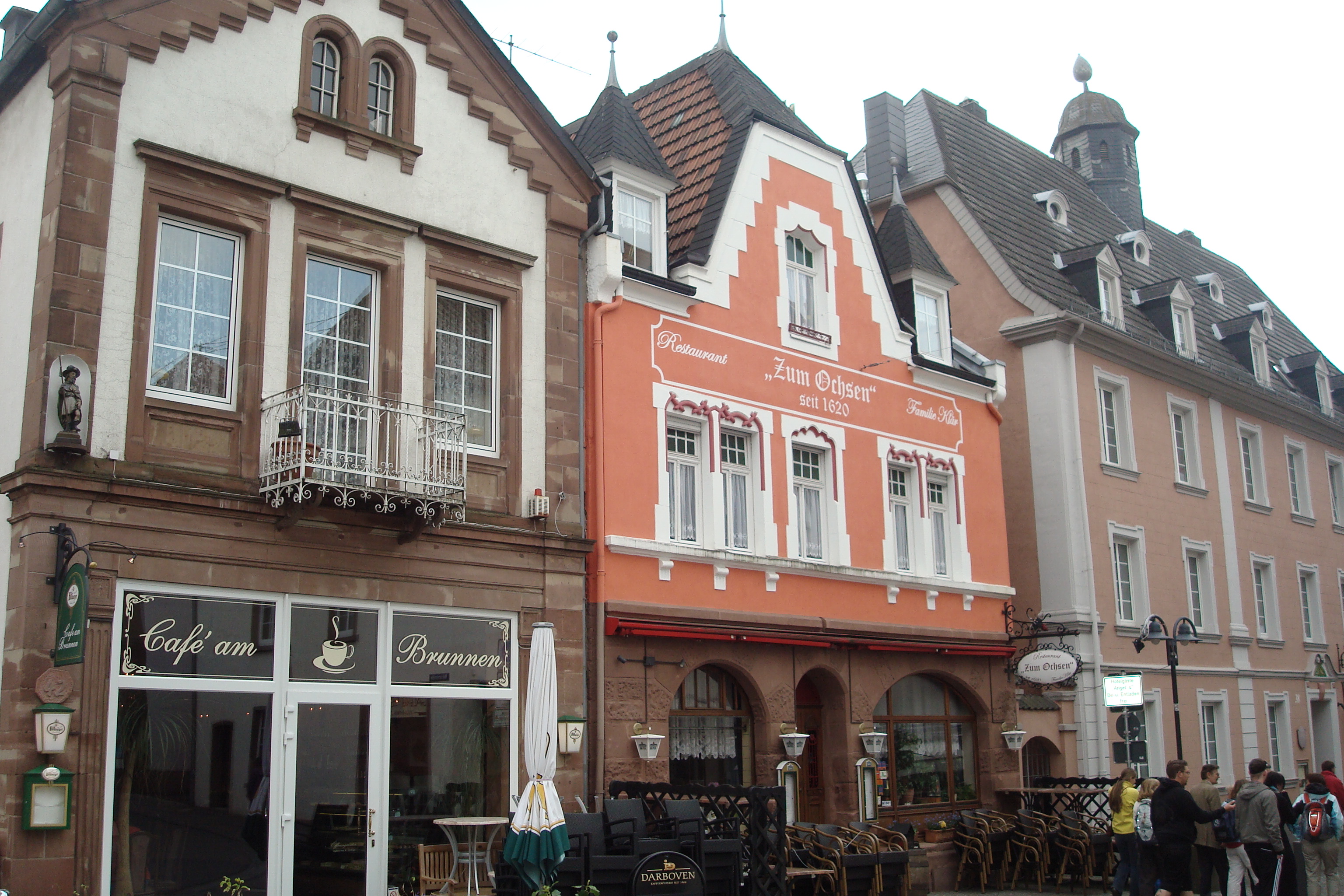 The orange building in the middle was built in 1620 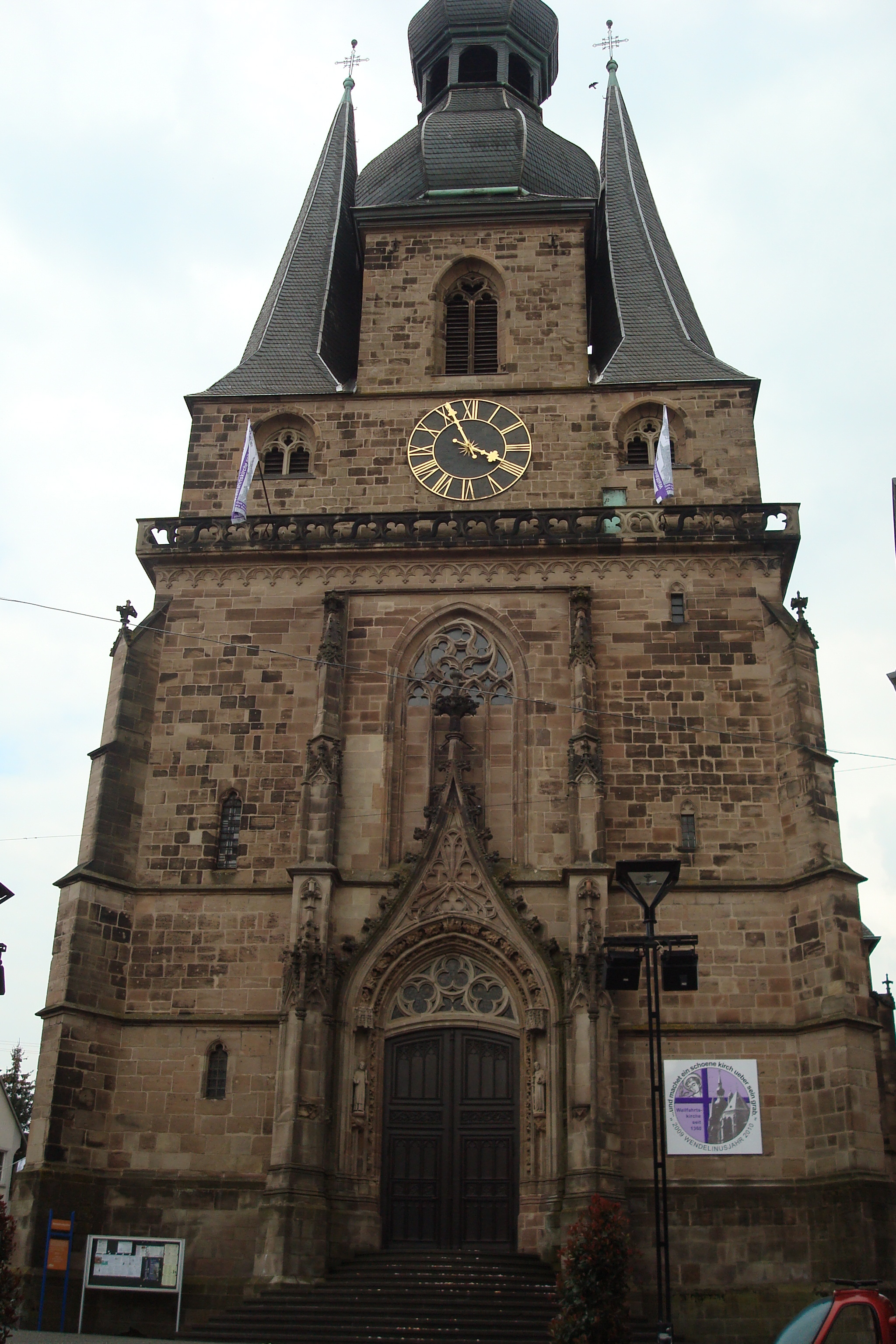 The main Catholic church in St. Wendel. Along one of its walls you can see where shrapnel from bombs and gunfire damaged it during WWII.

One of the things I was really enjoying about our time in with Anne and her family was breakfast. At home in the US, breakfast is usually a quick affair: a cup of (heavenly) coffee, some cereal or pancakes, a bit of fruit and bing-bang-boom, we’re out the door. Not so in the Baur household.

Breakfast is treated much like we treat dinner. An abundance and variety of food is laid out and enjoyed over a much longer amount of time than I devote on an average morning. Coffee, tea, juice, vegetables, cereals, cheeses (Anne’s favorite), meats, and lots of delicious, freshly baked breads from the local bakery. It took some getting used to at first. A lingering breakfast meant getting up earlier, something I usually avoid whenever possible. But after a few days, I began to really appreciate the ritual of it all and truly missed it when we returned home.

In my next travel post, I’ll share about our time in Paris. Until then, intrepid readers, do sit in the kasbah and share a thought or ask a question. Have any of you been to Germany? Or have a wish to go to Germany? Ever host an exchange student? What was it like? I always love hearing from you!

Letters from Benedict: On Secrets, Angst & The Long Wait→