Letters from Benedict: On Jaguar, Going to the Movies & Rescuers in Black→

Despite the interest we both had in seeing Marrakesh, my daughter and I departed Rabat and the Cross-Cultural Solutions program feeling a little down. (You can read more about our volunteer week in Rabat with CCS here, here, here, and here.) Our time with CCS was incredible and fantastic. I highly recommend the program overall and can’t say enough positive things about it. I felt like I was finally getting that study abroad experience (minus the exams and papers) I so craved but never did when I was in college.

As a souvenir of sorts, my daughter decided to have Khadija, the house manager, do some henna tattooing on her before we left. 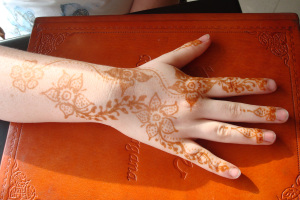 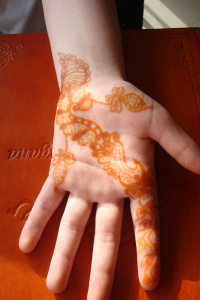 Exactly one week after we had arrived at the CCS house, we said our final good-byes, boarded the crowded train and then settled in for the five-hour ride to our new temporary home in the Moroccan interior.

The description in Lonely Planet’s Morocco guide (2010) sums it up nicely:

“Marrakesh is too packed with mind-boggling distractions and labyrinthine alleyways to adhere to boring linear logic. If you did have a destination, you’d only be waylaid by snake charmers, out-of-control donkey carts, trendy silver, leather poufs and ancient Berber cures for everything from relationships to rent.”

Founded in 1062 by Berber tribes and later becoming one of the Imperial Cities, Marrakesh is similar to Fez in they both have a Ville Nouvelle (new part of the city created by the French and Spanish occupiers), a medina (ancient walled section of the city), and a Jewish quarter. When Morocco became an independent nation in the early 1900’s, Marrakesh returned to its origins as a stop over for caravans given its proximity to the the desert as well as the Atlas Mountains. It wasn’t until the 1960’s and 1970’s when it was given the reputation as a place of mystique and mystery by hippies and spiritual seekers who passed through Marrakesh. Later visits from famous musicians (Led Zeppelin, The Beatles, and The Rolling Stones to name a few) gave the city a boost in tourism and the reputation as a mystical place to visit has stuck ever since. 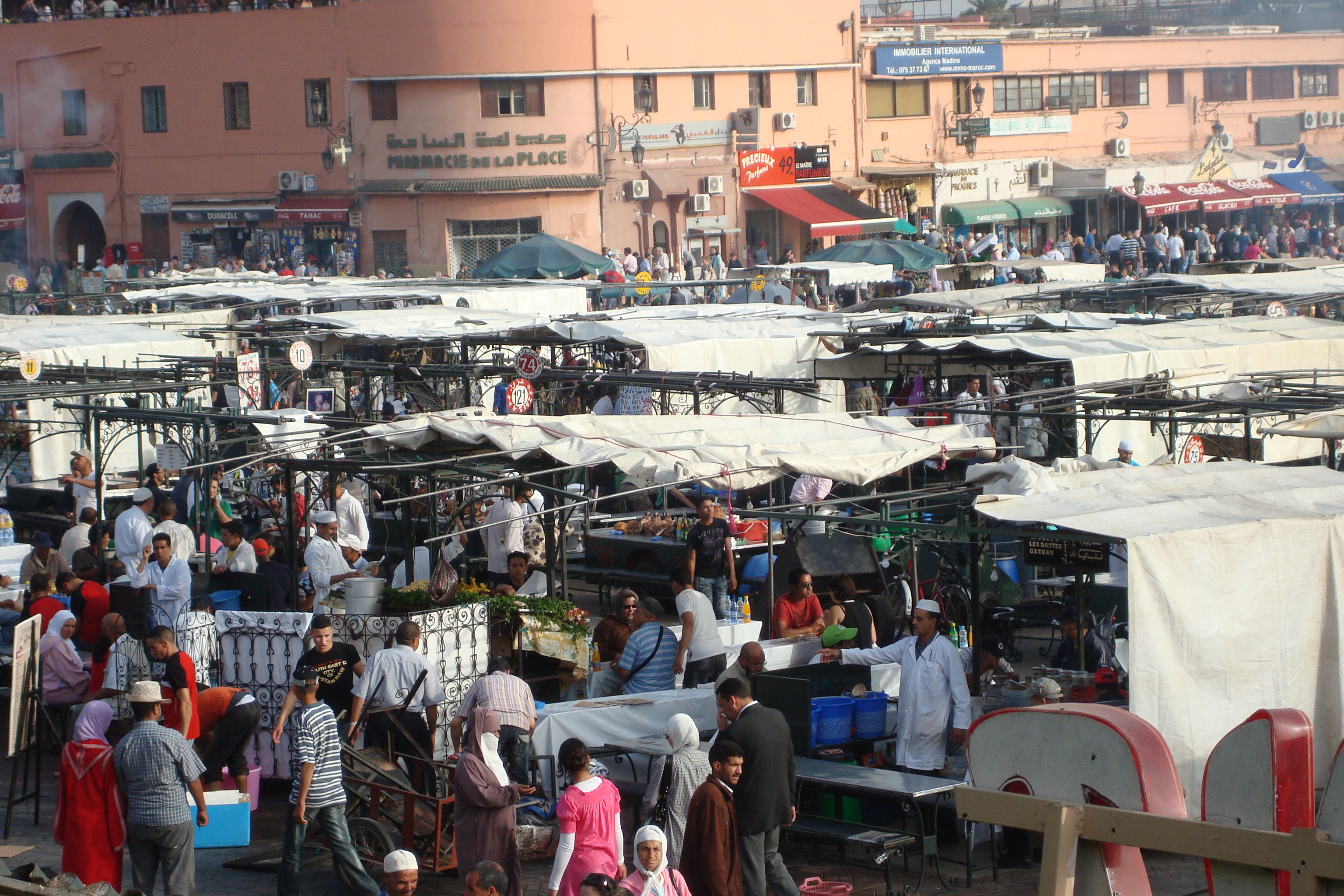 Djemma el-Fna, the main square of the ancient medina of Marrakesh

Because we chose to stay longer in Rabat, we only had a day to explore. For the record, one day is NOT even close to enough time to scratch the surface of this amazing city. I had arranged for a driver to pick us up from the train station and help us navigate the winding alleyways and streets of the medina to our riad, much like I did in Fez. Marrakesh’s medina is as complicated as Fez’s, though by now we were used to being more than a little lost when it came to finding our way through these dusty roads. 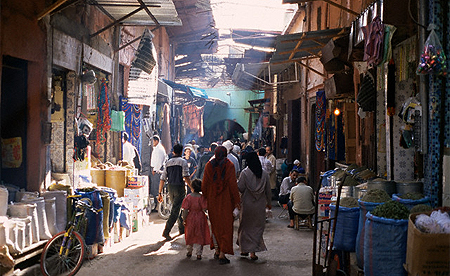 When we arrived at Riad Massine II, we were shown to our very narrow room. Later, over cups of tea in the courtyard, our host explained that the easiest way to find our way back to the riad was to “follow the lights”. At first, I had no idea what the he was talking about. It was when we were about to leave and explore the medina that the host stepped outside the door and pointed to the electric light fixtures mounted on the sides of the buildings. He explained whatever way the light is pointing, that’s the direction you should turn until you find your way back here. Ingenious and immensely helpful. 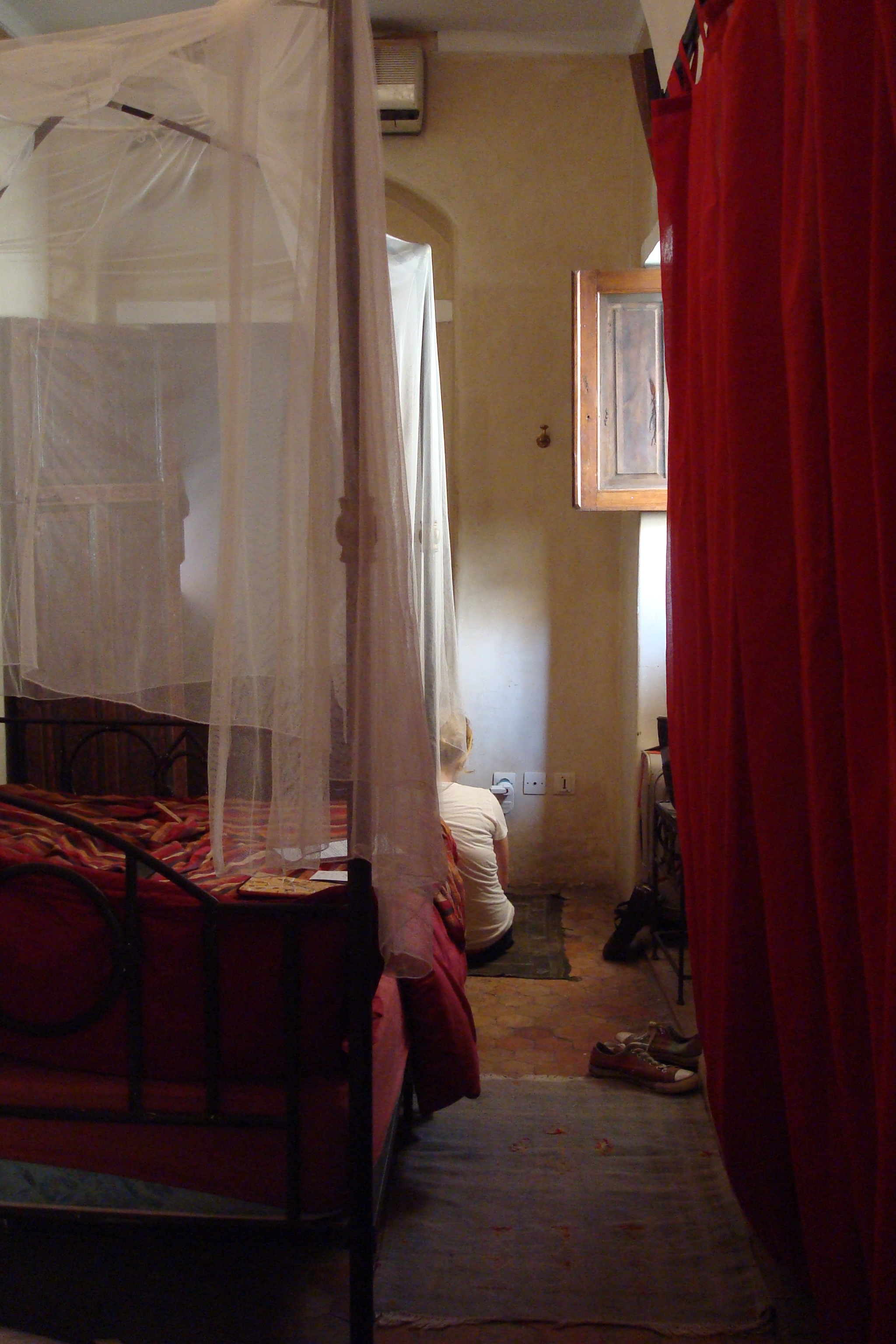 It was very hot that day and my intrepid traveling companion was worn out and exhausted from a busy ten days of traveling and a week of volunteering. After a brief nap, we decided to first find some place cool to sit and eat before exploring the medina. The vendors in the Djemma el-Fna were starting to set up for the dinner crowd. Hundreds of booths and tables were springing up over the entire square and the musicians, fire eaters, magicians, and snake charmers were setting up around them. I wanted to see the action that is the Djemma el-Fna without being in the fray just yet so I found a restaurant with a balcony that gave us a great place to observe it all. 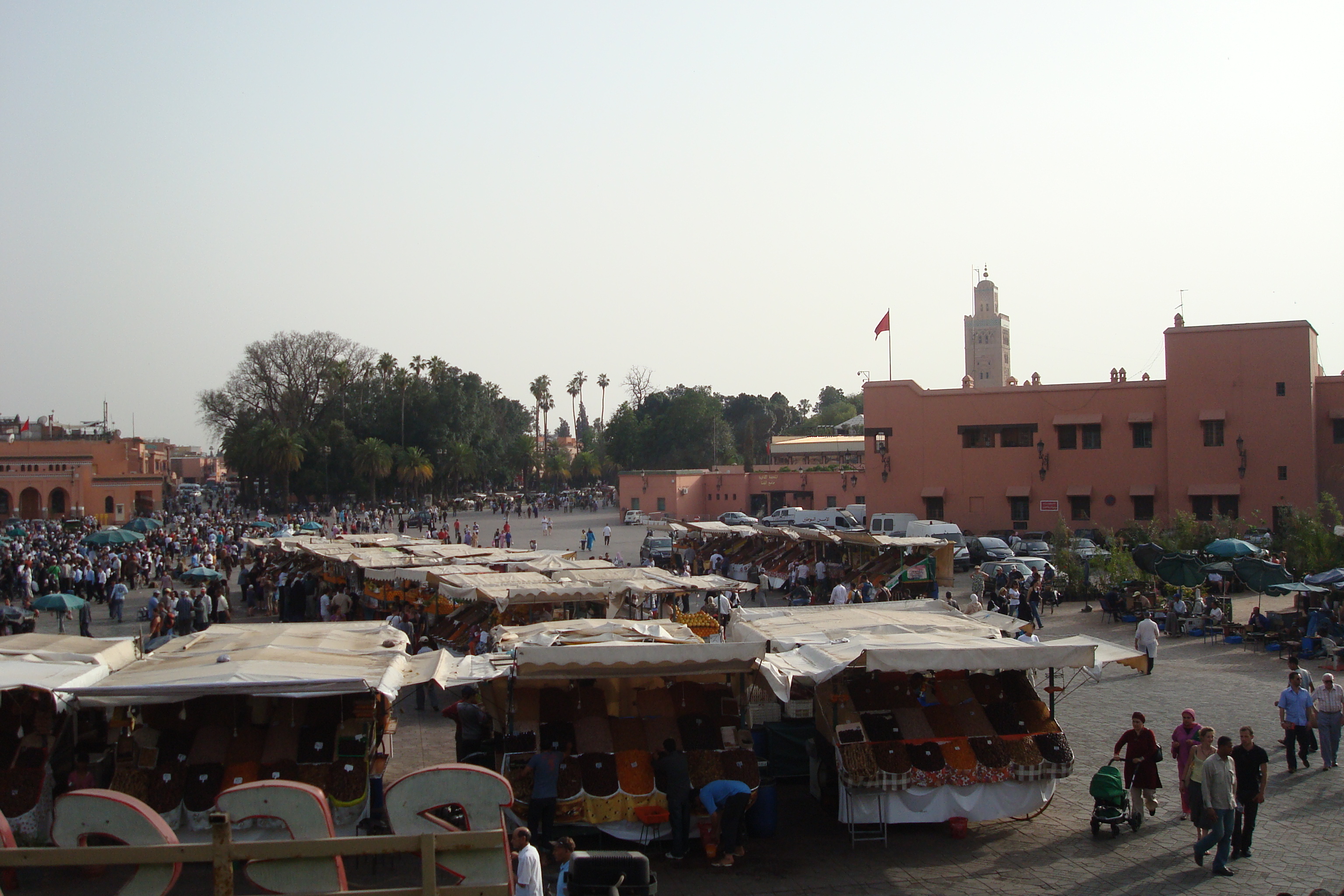 The medina of Marrakesh has vendor souks much like the ones in Fez and Rabat. Exploring and getting lost in them is a bit of the fun in walking through the medina. We found the shop owners and vendors in Marrakesh to be a bit more assertive in trying to lure you into their shops compared with the two other medinas we visited. The practice I had with negotiating and being firm with the shopkeepers in the relatively gentler medinas in Fez and Rabat came in handy in Marrakesh. I was glad this city was at the end of our trip for that reason.

Because we didn’t have time to explore any cultural sites beyond the medina, we decided to make a leisurely afternoon and evening of wandering the streets of the medina and doing a little shopping. I did have one thing I was looking for, though: a small bag in which to carry my newly purchased tagine (you can see a photo of it in this post) safely home. Given its awkward shape, it wasn’t fitting too well into the suitcases we brought. Just stopping to look at something drew the shopkeepers to you like moths to a flame. I had to be very persistent in saying “la shukran” (no, thank you) to them and walk away if I wasn’t remotely interested in buying something. Marrakesh is host to millions of visitors each year and the medina is one of the most visited sites there. The shopkeepers, while friendly and nice, can see you – the tourist – a mile away and are ready to try just about anything to get you to buy their goods. 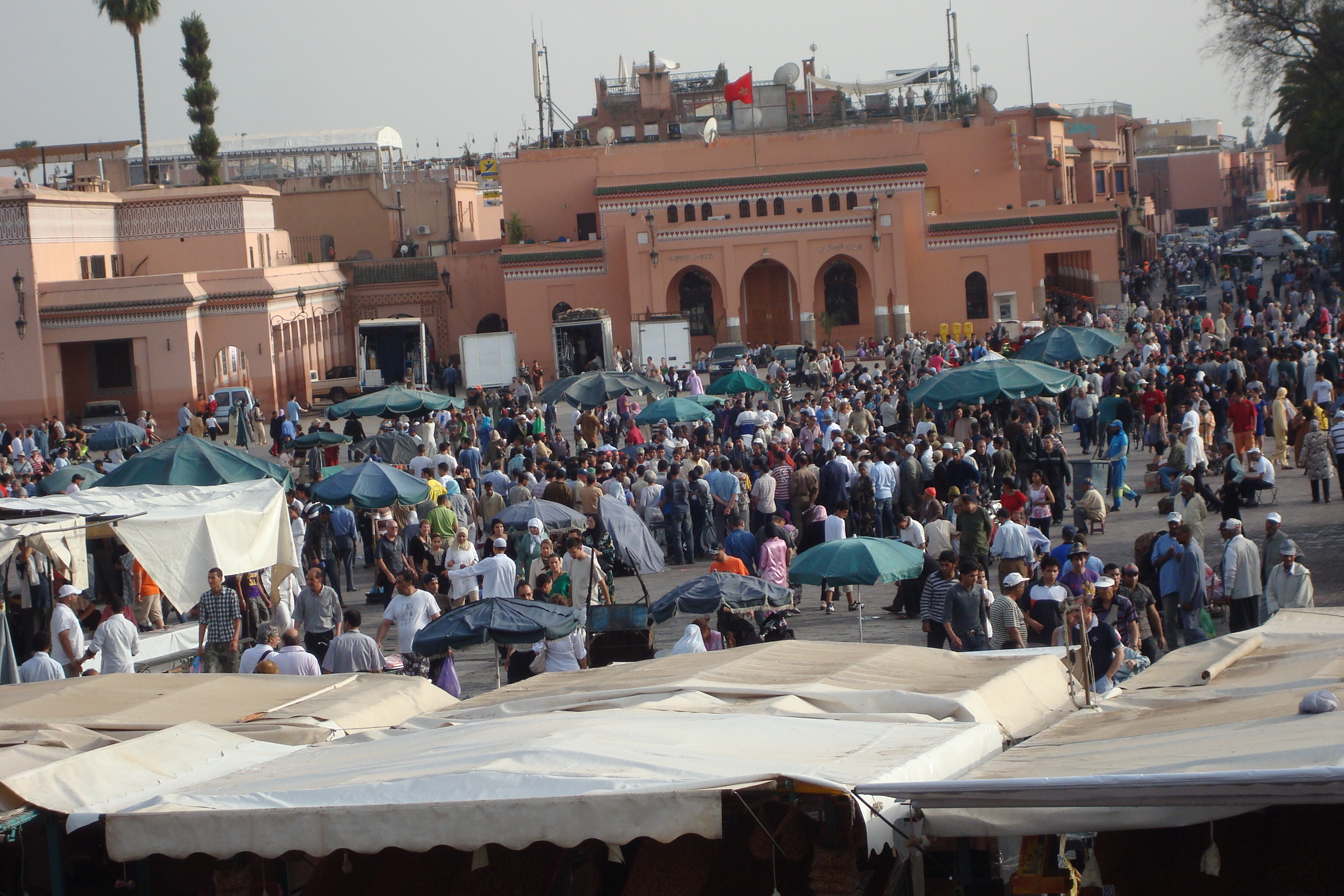 Since we were going in and out of shops that sold bags, we were told over and over again by various shopkeepers that they had “real fakes” to sell us. Shouts of “Come see our ‘real fakes’!” and “Real fakes sold here!” were heard over and over again as we walked along the narrow, crowded streets. (A “real fake” is, of course, a knock-off designer bag made to look like the real thing.) We found this very funny, especially since this was supposed to be the big selling point of the bags.

At one particular shop, I was shown numerous bags that I had no interest in buying and when I gave my polite, yet firm “La shukran”, the shopkeeper insisted that he had “just the bag for me” at his other shop “just around the corner”. Again, I said “La shukran” and threw in a “Merci” for good measure hoping he got the point and walked out of the shop.

The shopkeeper must have thought I was agreeing to follow him to the other shop because he walked briskly ahead of us and was trying to talk to us in French and Arabic and attempting to direct us to the other shop. When we coincidentally walked past the other shop, the shopkeeper darted into the store, grabbed the “ideal” bag for me (it wasn’t) and was back out before I could protest again. It took me another five minutes to extricate us from that shop. Eventually, I did find the perfectly shaped bag for transporting the tagine, though we had to endure that kind of scenario a few more times before I purchased it. (And no, it wasn’t a “real fake”.)

I also bought myself a necklace as a reminder of my Moroccan travels. I wanted a souvenir that was both beautiful and something that I would use. The necklace is not fancy or made of expensive beads; rather, it just spoke to me as being The One. I think of Morocco every time I wear it. 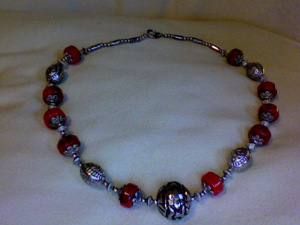 While perusing in the jewelry shop, one of the shopkeepers asked us if we were English or American. When I said we were Americans, I’ll admit I was for a brief second worried that he might scoff at us or want to rant about the evils of the U.S. Instead, he asked what we thought of Morocco and if it was anything like what we had likely heard in the news and media. He seemed genuinely interested in our American viewpoints of his country, and specifically, if we had negative, preconceived notions of a Muslim nation and if they were confirmed during our visit. I, of course, gushed over my experiences in Morocco and how I felt very welcomed in his country. I also assured him that I was there to learn about and see a culture different from my own and not to keep tabs on the differences or pass judgement on it. We had a great conversation about how travel can open a person’s eyes in ways that just reading about a place cannot. We also lamented how the media’s focus on the radical few can really damage a person’s view of a country. It was, by far, my favorite part of the evening.

We wandered the medina streets until late and then, following the lights, made our way back to the riad. We had an early flight the next morning and needed to get some sleep before continuing our intrepid travels in Europe. Because our time was very, very brief in Marrakesh, I’ll direct you to My Marrakesh, a fascinating blog written by an American woman who runs a guesthouse just outside of Marrakesh as well as a boutique store in Marrakesh, for more insights on this wonderful city. Also, to see some  amazing photos of Morocco, check out Nin’s Travelog. Her photos are so much better than mine and show more of what we saw while in Morocco, especially in Fez.

When the time came to say goodbye to Morocco and to Africa, I’ll admit I was sad. Morocco had quickly become one of my favorite places in the world even though I couldn’t claim to have been to many places yet. I had many more places to see and experience but I already knew I would return some day. Fez had enchanted me beyond words. I had but the merest of tastes of Marrakesh and was craving more of the fascinating city. Then, there were the places I hadn’t even seen yet: the coastal town of Essaouira, the desert to explore on camel back, and the mighty Atlas Mountains. Oh yes, Morocco, I will be back someday to see more of your delightful, exotic beauty.

Next up: Madrid, Berlin, Paris, and London. Stop back in the kasbah over the coming weeks for more stories of the intrepid travelers as we explore a bit of Europe!

How about you, lovely readers? What are your thoughts, opinions, or questions on my very brief time in Marrkesh or my time in Morocco overall? Do your preconceived ideas of a place you’re visiting (either positive or negative) overly influence you when you’re there? Do you find that those preconceived ideas radically change once you’re there? Have you ever been treated negatively for being an American abroad? Step into the kasbah, have some tea and share!

24 thoughts on “My All-Too Brief Time in Marrakesh”

Letters from Benedict: On Jaguar, Going to the Movies & Rescuers in Black→