Letters from Benedict: On the Olivier Awards, Aluminium, & How Acting Can Help Your Writing→

I hadn’t expected the city of Rabat to have such a wealth of historic sites to see. surprisingly, it is home to some Roman ruins. One place we visited while there was the Chellah Necropolis and Kasbah which was originally built by the Phoenicians in the eighth century BCE. In 40 CE, the Romans built the ancient city of Sala Colonia, creating a walled port city on the banks of the River Bou Regreg.

The Roman settlement lasted until the mid 12th century and eventually was taken over by various Berber and Merenid tribes through the next several centuries. A ribat or fortress-monastery and necropolis was built on the site and eventually gave the city its current name, Rabat.

The Almohads arrived on the scene in the 12th century and rebuilt the ribat as a kasbah, creating a strategic location for military campaigns to bring Andalusia back under Muslim control.

Rabat enjoyed a brief stint as an imperial capital (as did Fez at one point) until the end of 13th century when the death of the sultan Yacoub al-Mansour ended its heyday as well as the construction on Chellah and the Hassan Mosque (discussed here). Chellah fell into disrepair for many centuries until the city reclaimed it as a historic site and opened it to visitors. 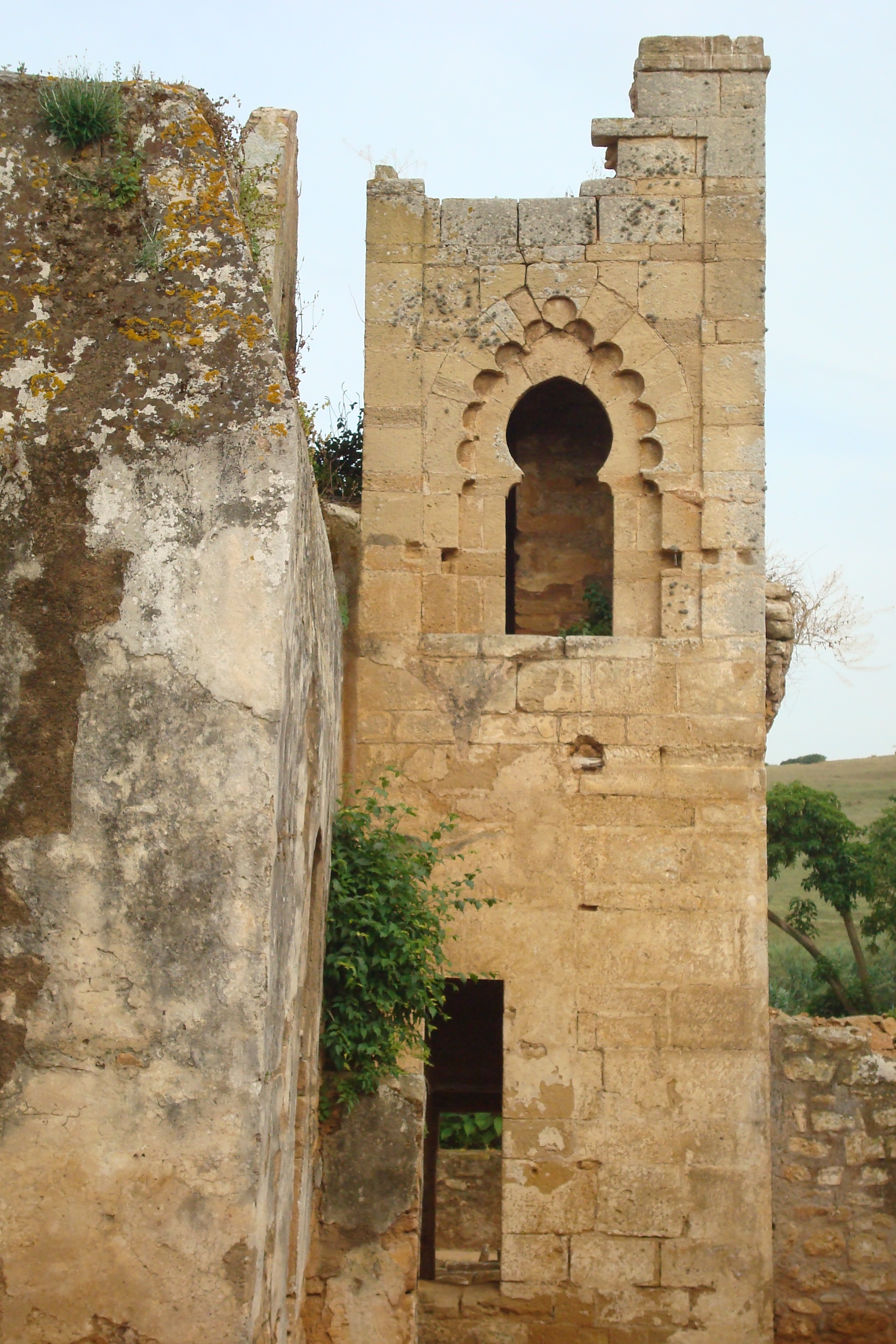 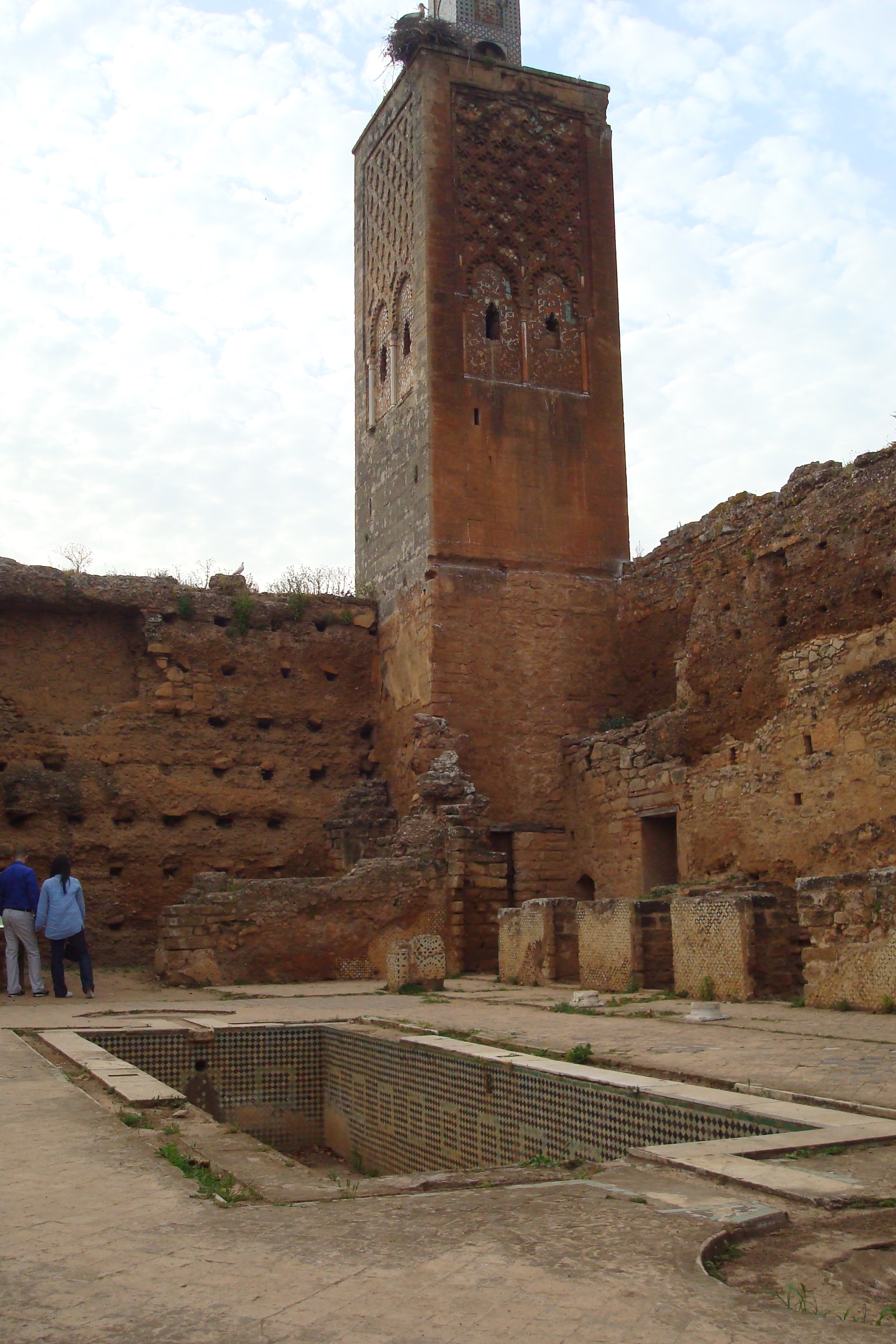 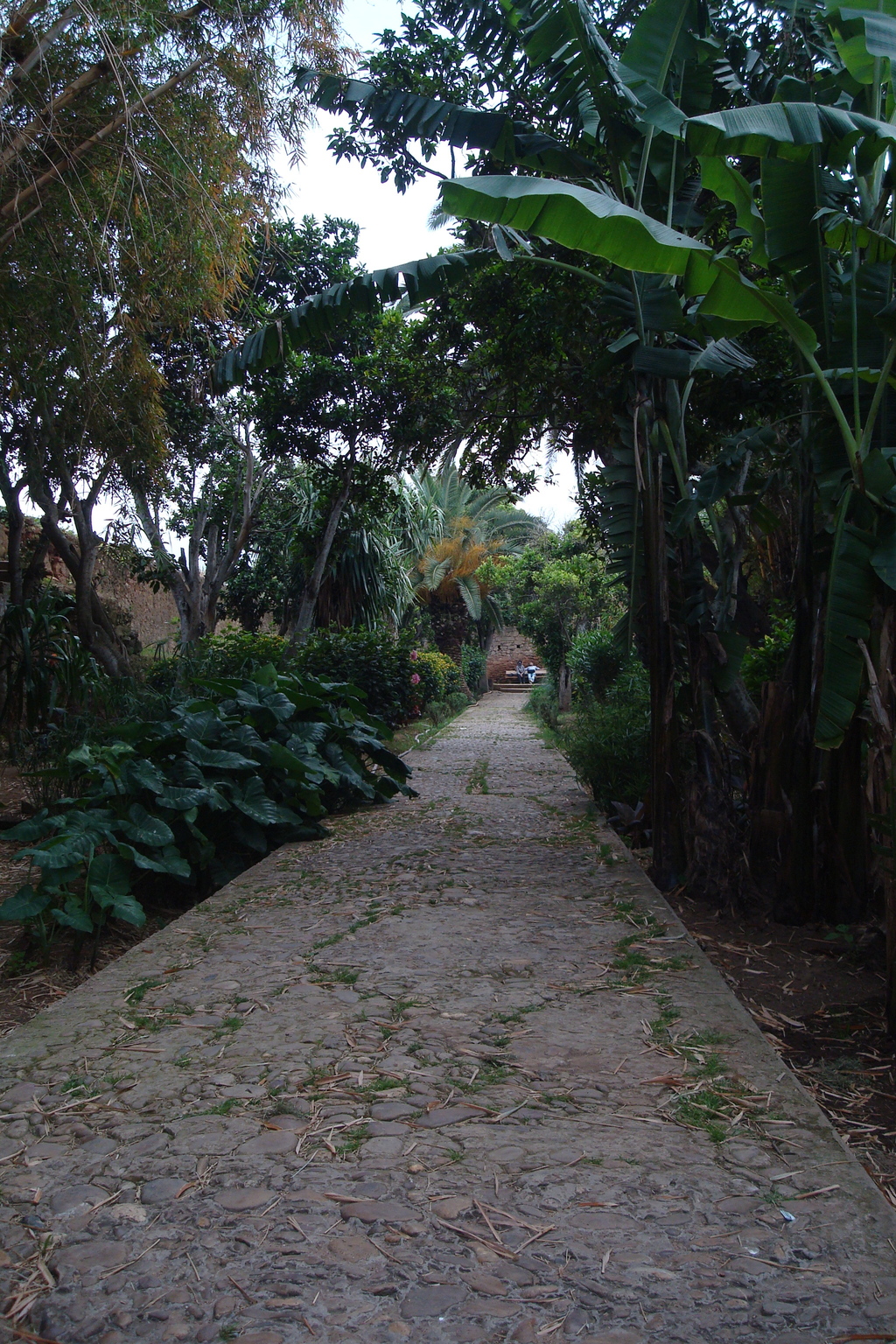 Once inside the walls of Chellah, the past opens itself to you. Chellah was once an ancient cemetery for royalty and as you meander through its winding pathways, you can find tombstones and burial sites.

Walking through the ruins, you can also see the influence of the Romans in the layout of the roads, the baths, the gardens and the architecture such as the Arc de Triomphe, Temple of Jupiter, the forum, and a pool connected to aqueducts.

Then there is the Islamic influences in the peaked archways, the remains of zelij mosaics in a medersa (theological college), and the minaret from which calls to prayer were announced. 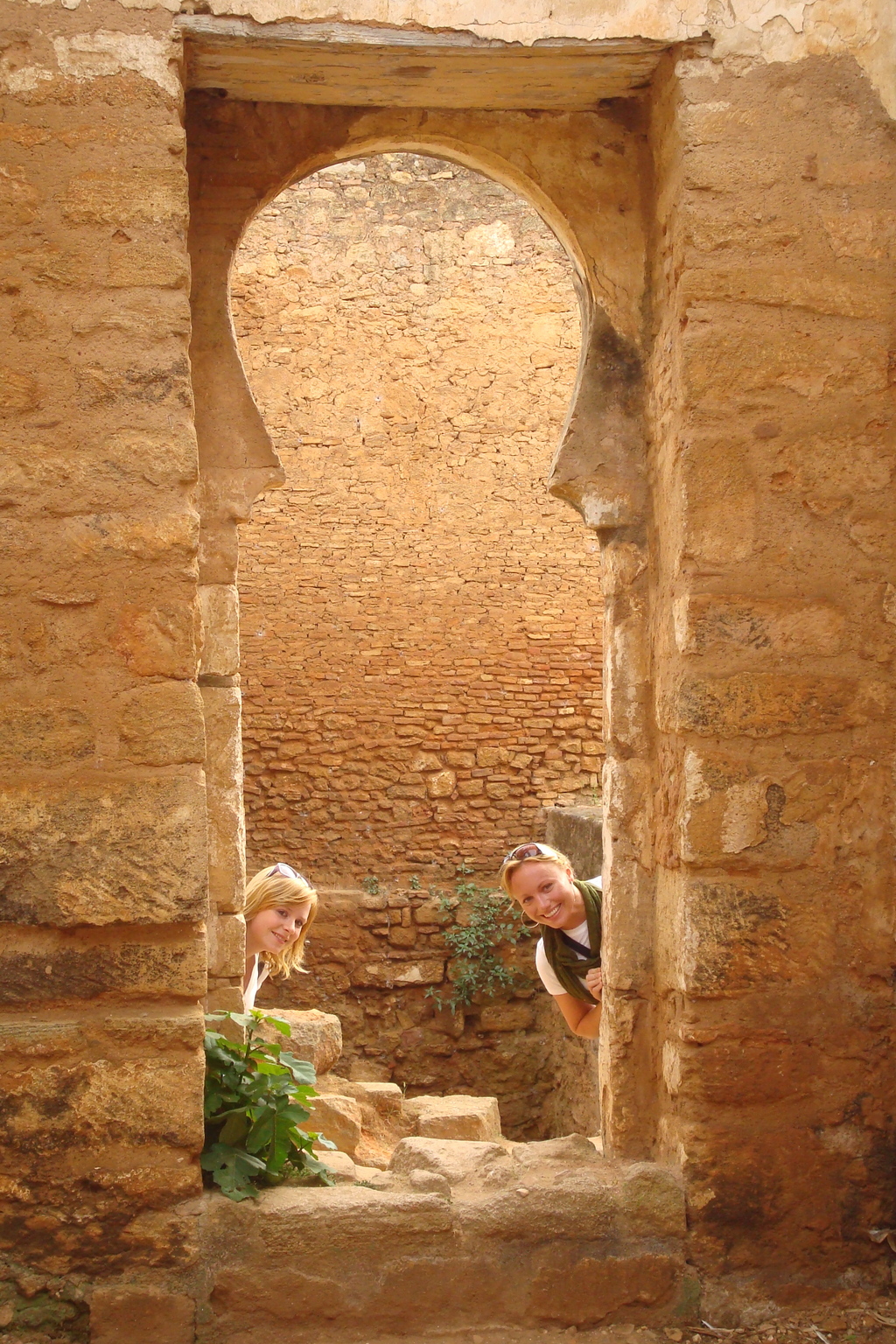 Never having seen real centuries-old ruins, I was amazed that you could simply walk around in the necropolis like it was any old city park. You could reach out and touch the walls and step on the pathways following in the same hallowed footsteps of the inhabitants that once lived there. You could walk through the doorways with the ghosts of Chellah’s ancient past. 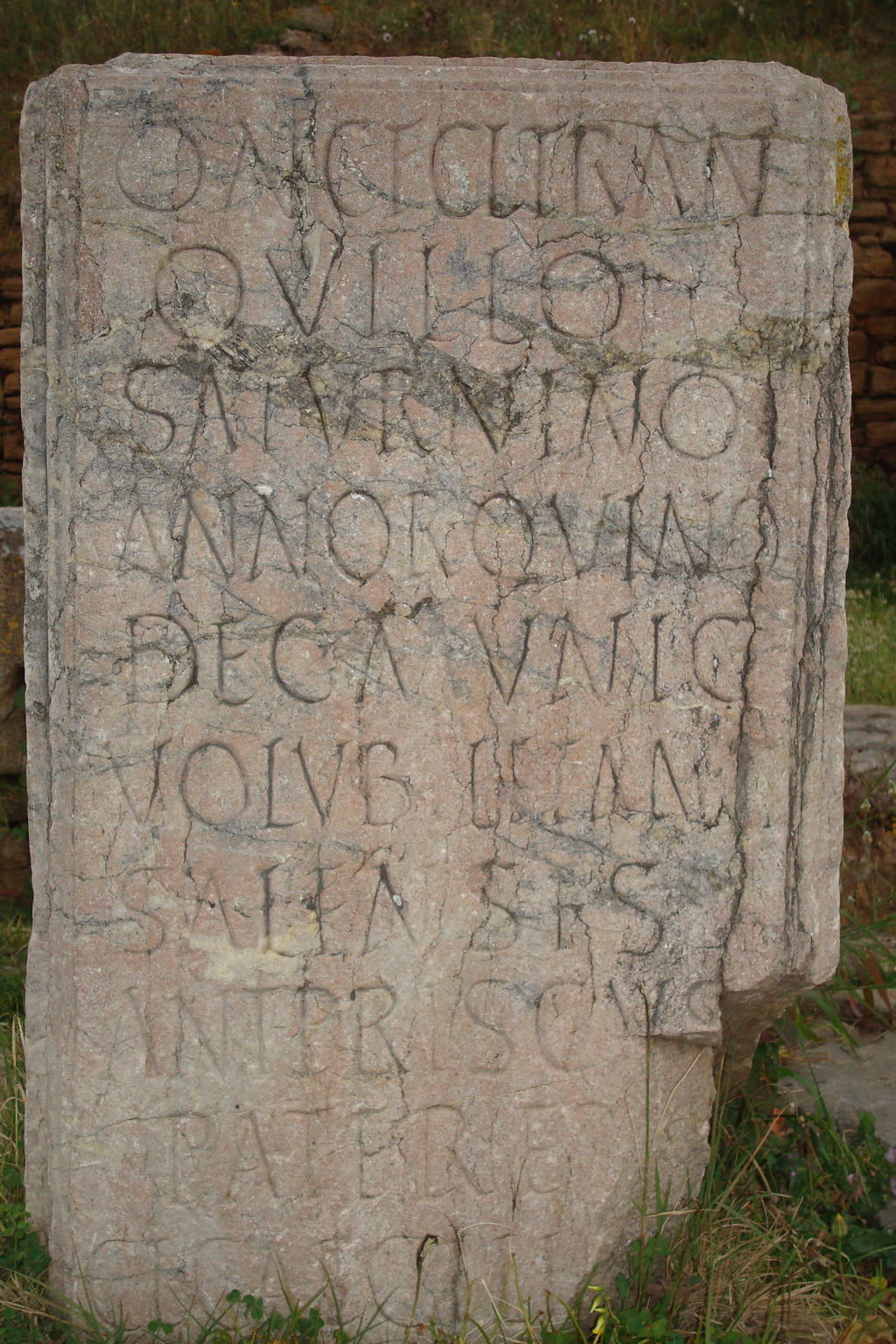 One of the other cultural activities that CCS offered was cooking lessons with the ladies who run the house. Khadija and Aicha spent an afternoon teaching us to make some traditional Moroccan foods using a tagine, or conical clay pot. 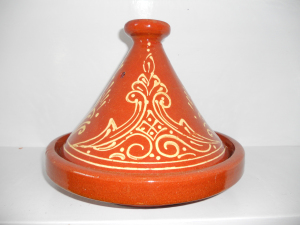 The tagine I bought that miraculously made it from Morocco, across Europe, and then home in one piece.

Tagine is also the name of the finished dish you can create in these pots. They come in all sizes and colors, though most Moroccan homes have plain ones similar to the one I bought.

Khadija and Aicha made it look so easy as they chopped herbs and sprinkled spices over the vegetables placed in the big tagine in the CCS kitchen. The dish we were making was going to be served as part of the dinner that evening so, you know, there was no pressure on getting it right. And yes, it turned out delicious.

In a tagine, food is cooked with just a little water placed in the clay pot at the bottom.  Once you have layered in your vegetables (and meat for those of you who are omnivores), starting with the most dense veggies at the bottom (e.g. potatoes, carrots) and building up to the least dense or quickest cooking veggies at the top (e.g. zucchini, tomatoes), you pour in a small amount of water. Saffron, fresh parsley, paprika, and fresh cilantro are key ingredients to the typical tagine and are liberally sprinkled over the top of the whole thing. Then the cone part of the tagine is placed on top and, depending on what you’ve layered inside, it can take anywhere from 30 minutes to an hour to cook on the stove top or open flame.

What you get out of all of that chopping and layering is a mouth-watering melange of tastes punctuated by the heavenly mixture of saffron, parsley, paprika and cilantro. (My taste buds are craving it right now as I type this!) Tagines are typically served with Moroccan flat breads (for scooping up the veggies and broth since utensils are not the norm) as well as couscous.

We also learned how to make a simple Moroccan white bean stew. It is one of my favorite things to make and so easy to do. Comprised of cannellini (white kidney) beans, grated tomatoes, grated onion, saffron, cilantro, parsley, paprika and a little olive oil, it couldn’t be easier to make and is soooo good.

I loved this part of our cultural experience and have since made it a priority to find ways to connect with the places I visit through the food that’s cooked there. To me, it is one of the best ways to experience another culture. Plus, there’s the added bonus of having recipes to bring home and recreate, thus creating a deeper appreciation of the whole journey.

By now, our week with CCS was winding to an end. My daughter and I had been contemplating returning to Fez with our new friends or going on to Marrakech as planned. (Actually, my daughter was pretty clear on what she wanted to do (go to Fez) while I debated it until the last minute.) Amazingly, I was granted divine intervention to help me in my decision-making process in the form of this note left on my bed on our second to last evening in Rabat: 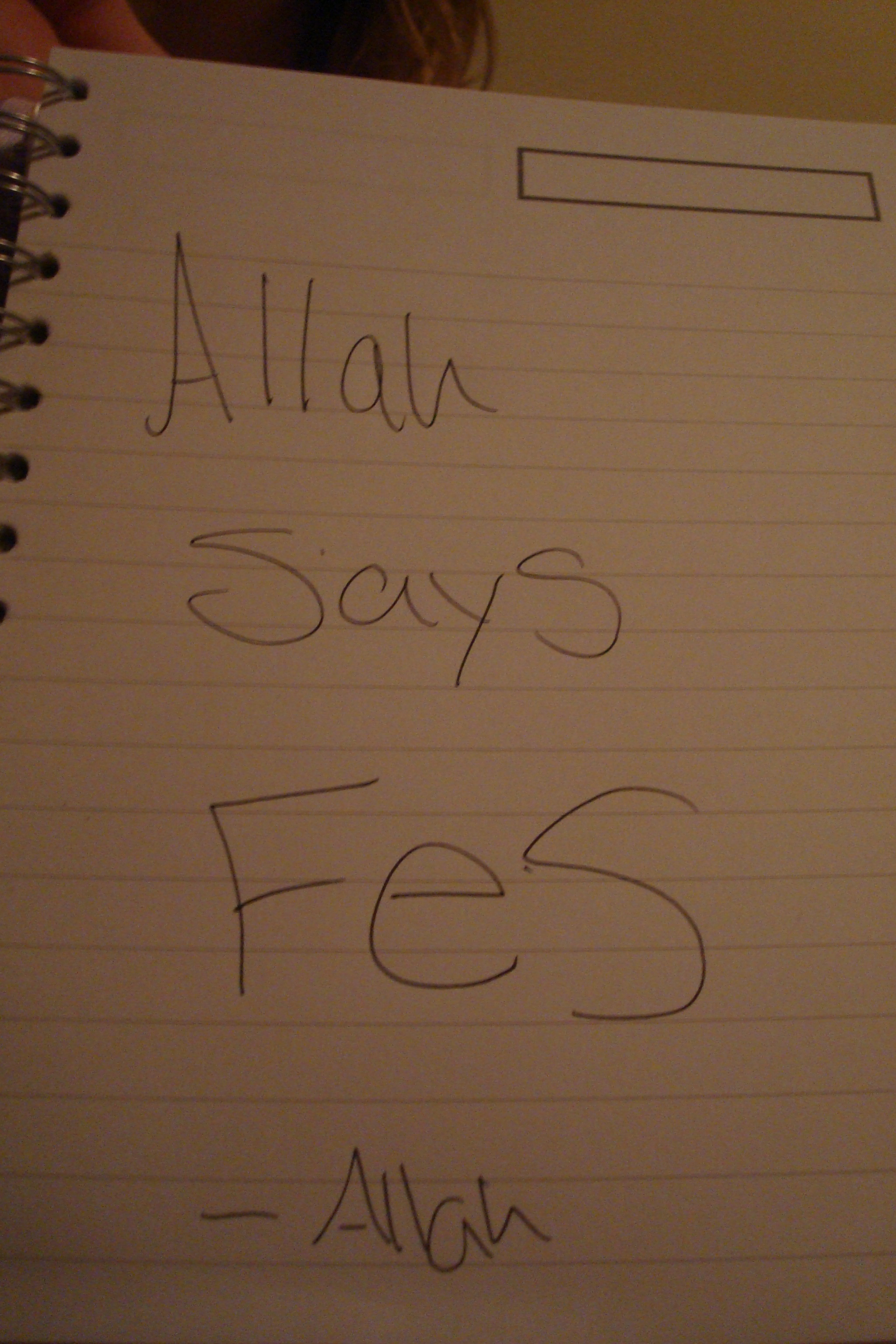 It's funny how Allah and my daughter have similar writing.

Despite what Allah was recommending, I decided we should forge ahead to new adventures in Marrakech, especially since we had a flight from there to Madrid in a few days to continue our intrepid travels in Europe.

On our final night, our cohort decided we should eat in a restaurant near the medina, something none of us had done yet since we ate all of our meals at the CCS house. The restaurant, Dinarjat, was mysteriously difficult to find. We had to wind through several tiny alleyways and streets and eventually ask for directions. And then, like coming upon a secret passageway in a fantasy world, we happened to find the door to Dinarjat. One of my friends went to open it and found it locked. A passerby noticed the confused looks on our faces and told us that we needed to knock to gain entrance. 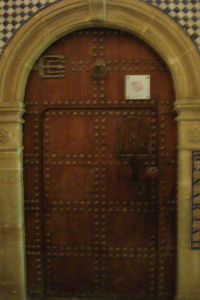 Inside was a Moroccan delight. Gorgeous architecture, dim lighting, and delicious food. 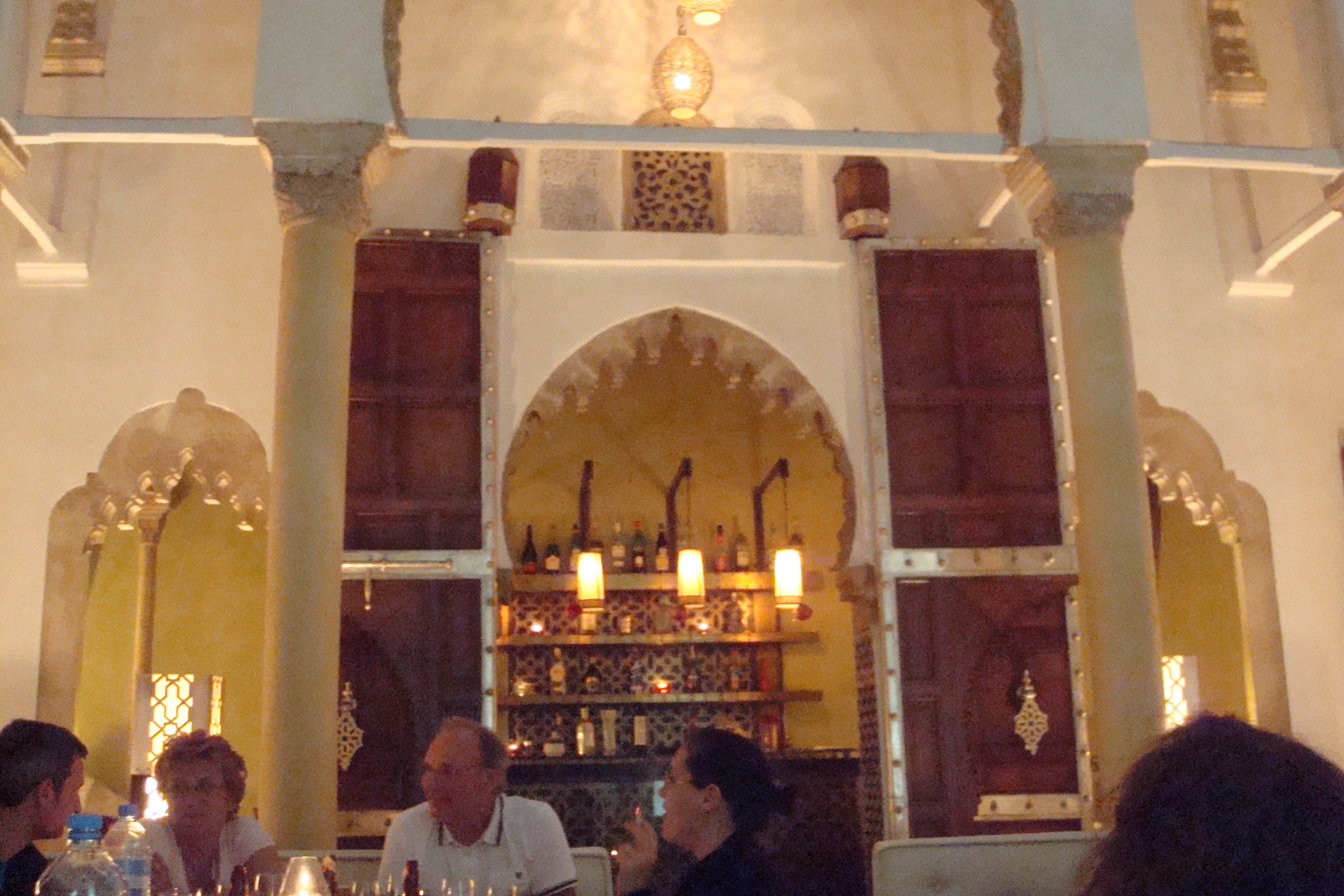 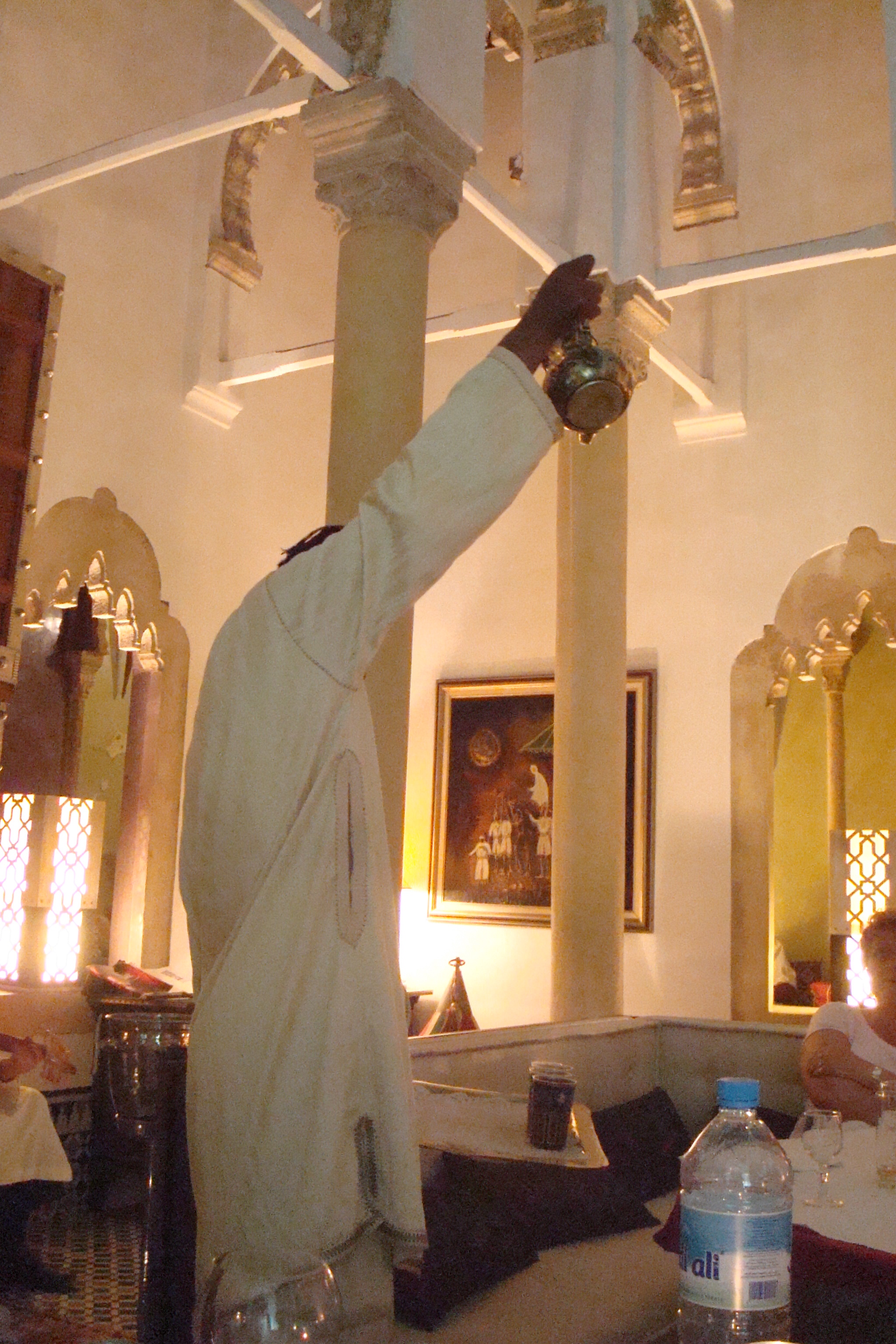 A server pouring the mint tea the traditional way, from way up high. Don't try this at home, kids.

It was a great way to end our time with our new friends and CCS. A full week of experiences and a lifetime of memories.

It was with sadness that we packed our bags and boarded the train to Marrakech the next day. Goodbyes are never easy and saying it to each of the people we connected with that week – including our little buddies at the hospital – was difficult. But I knew Marrakech was ahead, just waiting to show us her side of Morocco.

In my next travel post, I’ll share our experiences and the sights we took in during our all too brief time in Marrakech.

Questions? Comments? Please sit down in the kasbah, have some tea and share. I’d love to hear from you!

16 thoughts on “Volunteer Week in Morocco with Cross-Cultural Solutions: Part 4”

Letters from Benedict: On the Olivier Awards, Aluminium, & How Acting Can Help Your Writing→