Letters from Benedict: On Writing Caves, Poetry & Mystery Parcels Left in the Woods→

Even though we were sad to say good-bye to Josephine, Dar El Hana, and Fez, my daughter and I boarded the train to the capital city of Rabat with our sights turned towards our volunteer week with Cross-Cultural Solutions. (For more information about CCS, see this post here.) 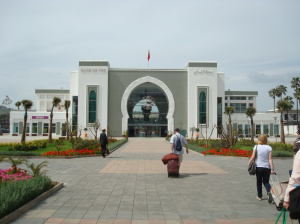 Even the train station in Fez is beautiful. Dear local chamber of commerce: please take note.

The first thing we noticed when we arrived in Rabat was how modern it seemed. (More on Rabat in future posts.) The city has preserved the centuries-old walled medina and like Fez’s, it functions much the same as it did when it was first built over a century ago.

Our train was late arriving into Rabat so we hurriedly left the station to grab a taxi. This was my first attempt at procuring one all on my own since Josephine had arranged all transportation for us in Fez. With a little help from a friendly train station attendant (who helped stop the cab driver from ripping us off), we made it to the CCS Home Base easily and quickly. 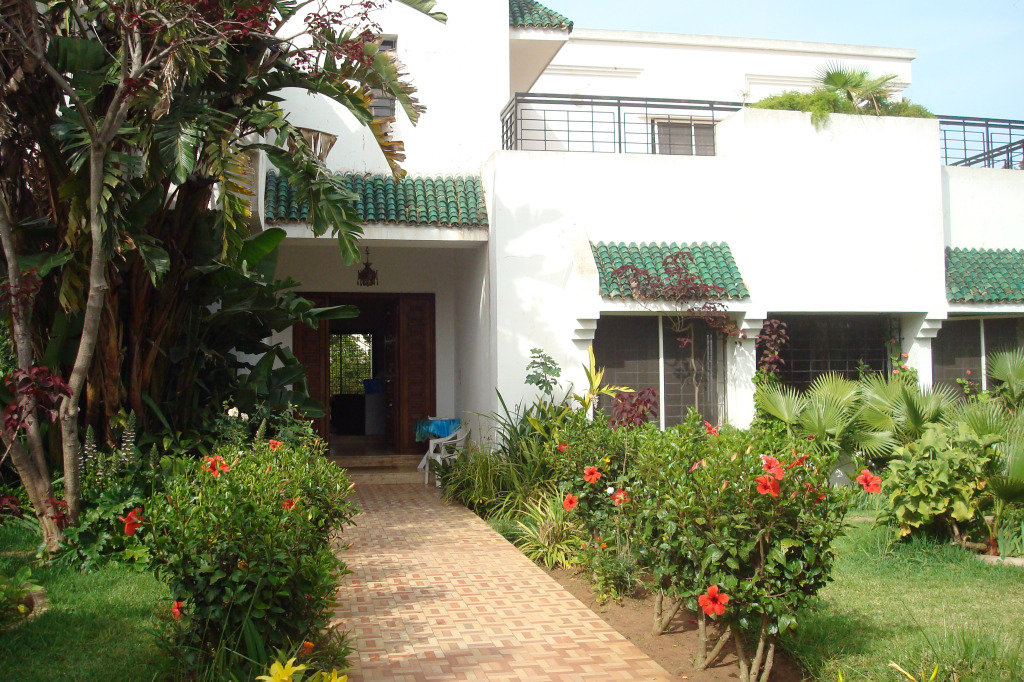 CCS Home Base in Rabat, our home away from home for a week

I had been told by my friend that the CCS home base in Rabat was very nice, but his descriptions really didn’t do it justice. Warm, welcoming, and wonderful (for you alliteration lovers out there) – that’s how I would describe it. 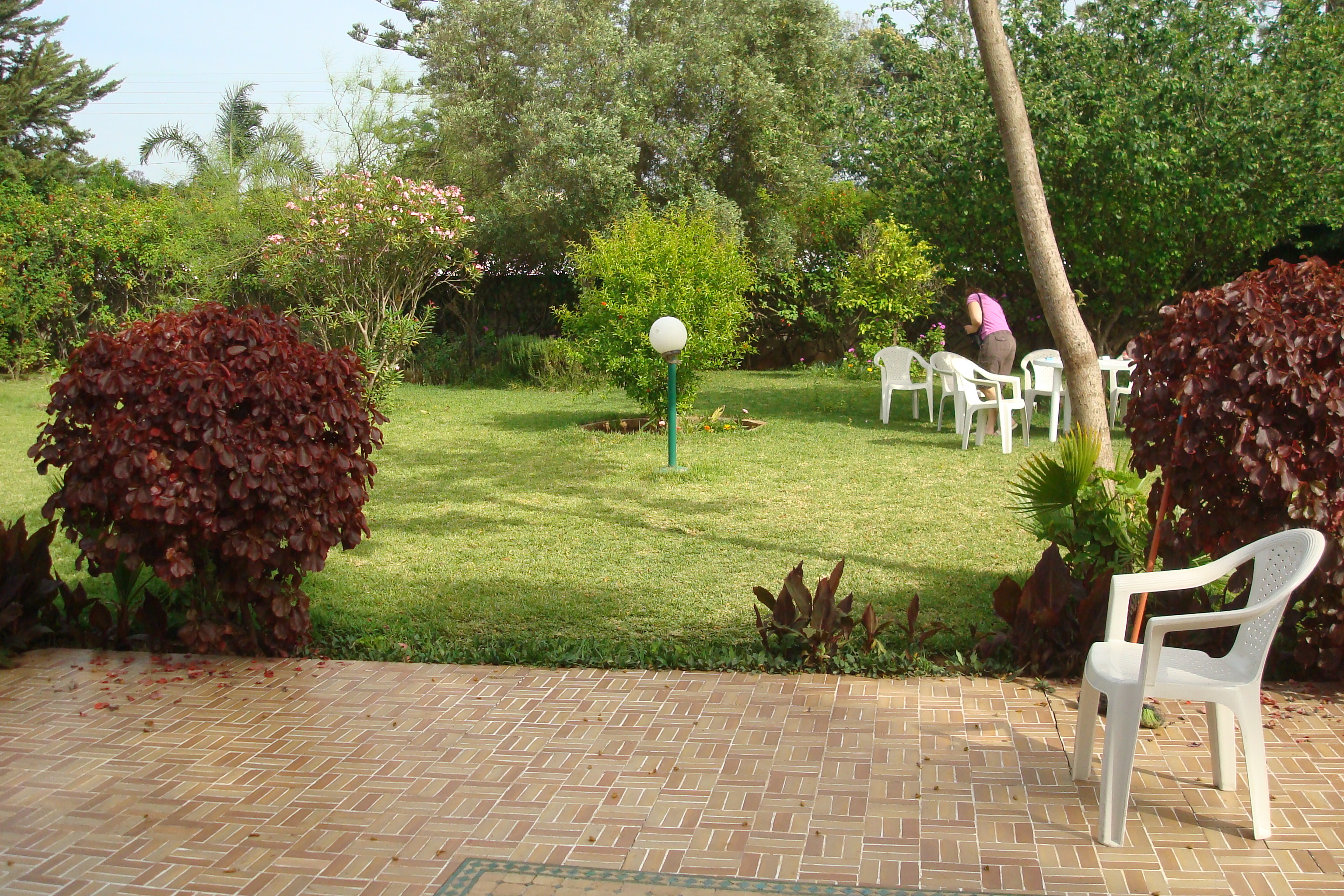 The three-story home is located in a nice neighborhood, close to a grocery store, shopping center, and several parks, and is a quick taxi ride to the medina or the beach. It can house up to 25 volunteers spread out over the three floors with 3-4 people per room.

Upon arrival, you’re given your room assignment and introduced to your roommates. A typical room usually contains two sets of bunk beds and a closet for your belongings that you can secure with your own lock (if you choose). It is basic, but then you’re not there to live in luxury or spend much time in your room. Our room was on the main floor and shared with a woman named Liz, who was also there for the week-long Insight Abroad program. 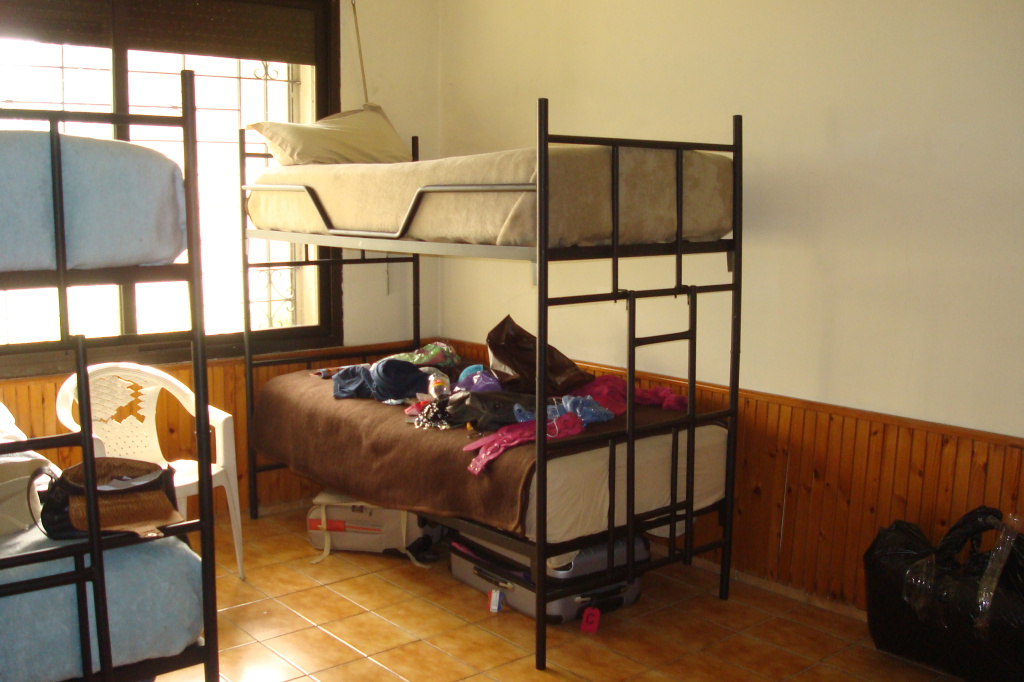 Can you tell which bed belongs to the teenager?

By the time we arrived, the four other people who were doing the week-long Insight Abroad program with us were already there and settled in. The house was full of activity and introductions and getting-to-know-you conversations. I felt very welcomed by everyone, including the volunteers who had been there for several weeks. I was duly impressed so far. 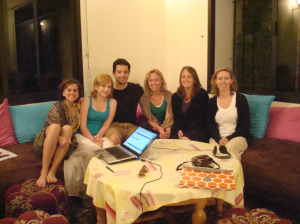 Our Insight Abroad cohort hanging out in the common room.

The house and the grounds are well-managed by a friendly, helpful staff. Khadija, the house manager, is very approachable and is always willing to chat or give advice or answer any questions. (She also is a wickedly good henna tattoo artist.) She works closely with Aicha, who does all of the cooking (breakfast, lunch, dinner, as well as afternoon tea time) and Fatiha and Leila, who do all of the cleaning of the house. 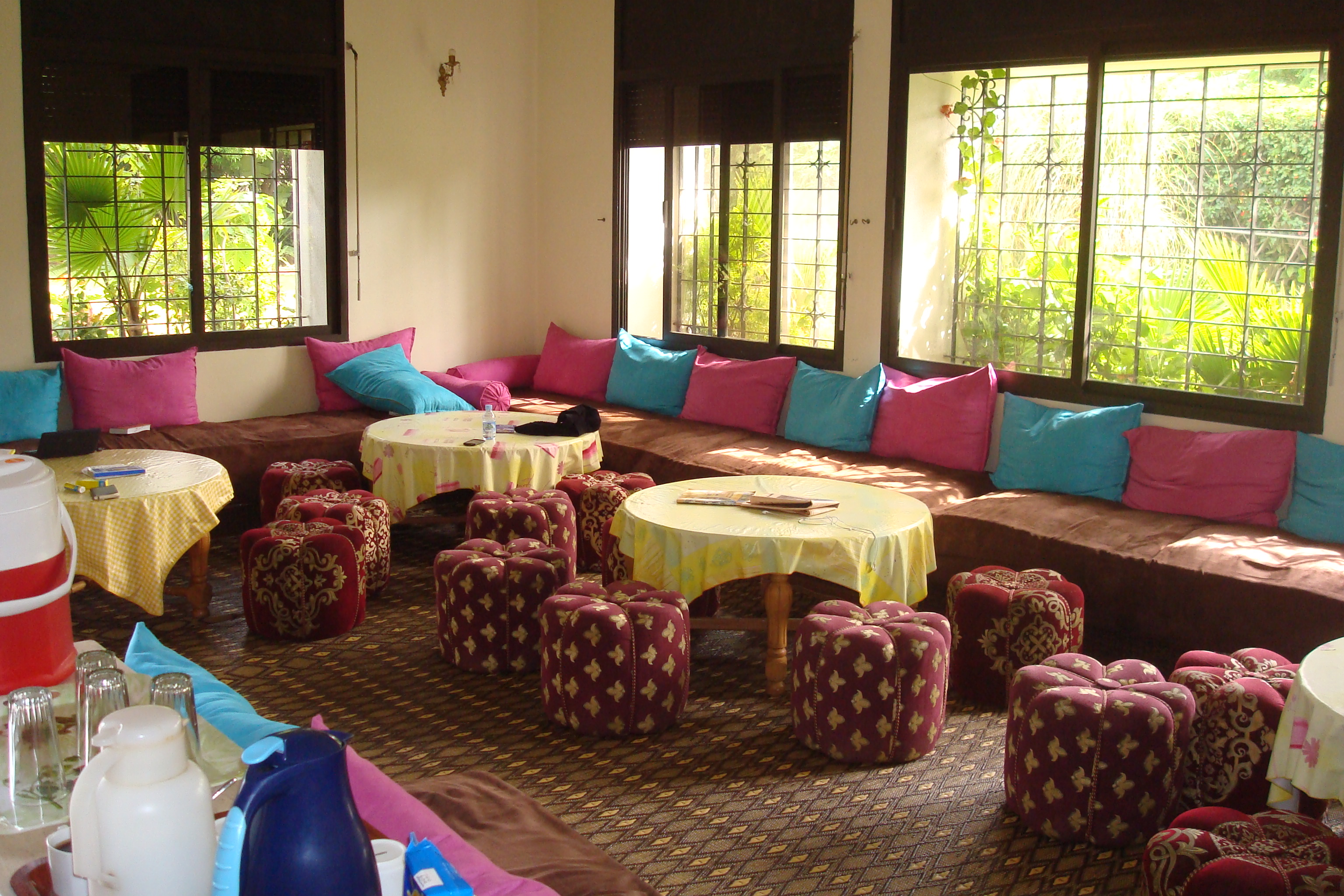 The common room where meals were eaten and general hanging out occurred. Look familiar?

We were also introduced to the two men who make the program run smoothly. Mohamed is the Country Director and oversees the whole shebang. With an easy-going smile, he is often seen in his study at the house making sure every thing is running smoothly. Abdellah is the Program Coordinator and handles all of the volunteer placements as well as some of the cultural activities in the house and the community. A very knowledgeable, very friendly man. (You can see photos of and read more about the staff at the Morocco Home Base at the CCS website here.)

That evening, a Saturday in late April, we were told that a free Earth Day festival going on in the park nearby. We decided to join the group of volunteers from the house that were walking over to the celebration. Expecting something small-scale, I was surprised to see how big it was. It took up several acres of park space and had a huge stage set up for musical performances. We all made our way over to the stage to listen to a few bands and to dance to the Moroccan version of rap music in Arabic. Not my thing, but interesting nonetheless.

What was striking to me was how few women and girls were in the crowd. Rabat is a more modern city where many women can be seen wearing European-styled clothes instead of the traditional djellaba (long robe with long bell-shaped sleeves) and head covering. Even so, conservative Muslim edicts are still followed by all women which includes dressing modestly when not wearing a djellaba and not being seen in public with boys or men who are not your relatives or your spouse. 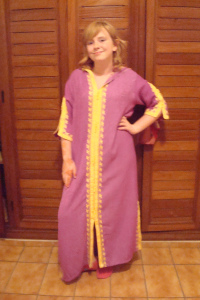 My daughter modeling her djellaba

A short time later, the rap performers left the stage to great applause from the crowd. Lots of announcements were followed by more applause and then the lead act was announced, though I couldn’t quite understand what was being said because it was all spoken in either Arabic or French.

Then, to my great surprise, I heard a man speaking in English up on the stage. It took me a few moments to realize who it was because we were pretty far from the stage.

Still, I had to confirm it with one of my new friends.

Yep, that’s who it was up on stage. 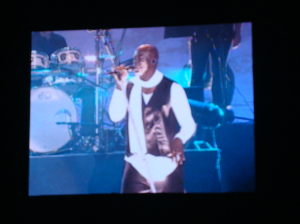 In case you thought I was making it up.

Travel Mojo would definitely get a raise when we got home.

Next time, I’ll write about our week-long volunteer project at the children’s hospital and some of the cultural activities we participated in through CCS.

And now it’s your turn! I’d love to hear your thoughts, opinions, and questions you might have about CCS, Rabat, or volunteering abroad.

22 thoughts on “Volunteer Week in Morocco with Cross-Cultural Solutions, Part 1”

Letters from Benedict: On Writing Caves, Poetry & Mystery Parcels Left in the Woods→