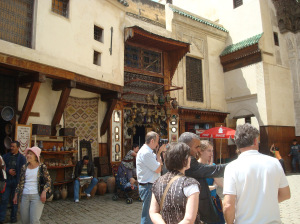 The medina in Fez is huge and can be difficult to navigate for the first time visitor even if you are armed with a highly detailed map. The winding walkways and alleys are like a complex labyrinth and were originally designed to make it difficult for intruders to make it into the heart of the city. This was apparent to us as we followed our porter to Dar El Hana the previous day. Jet-lagged and intoxicated by the sights, we could have easily been wandering for hours trying to find the dar.

Josephine, our host, had recommended in a prior email that we should hire a guide to show us around the medina. Normally I steer clear from such tours since I like to see things on my own and at my own pace. But given the complexity of the medina, the immensely rich history is possesses and the limited time we had in Fez, I took Josephine up on her suggestion and had her make the reservation for us.

Our guide, Hakim, arrived at Dar El Hana to pick us up to avoid any confusion over meeting locations. Not only was I impressed by his thoughtfulness and punctuality, but I was also quickly won over by his snappy suit and his professionalism. 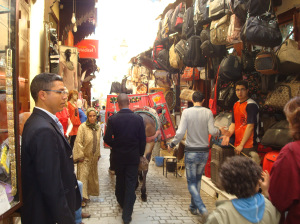 Hakim, our guide, on the left

We set out along one of the two main roads, the Tala’a Kbira. Hakim expertly guided us along, keeping an ever vigilant eye out for us so we didn’t get run over by a donkey heavily laden with crates of Coca-cola or a cart full of vegetables and fruits. Shouts of Balak! Balak! would be heard just seconds before Hakim would quickly motion us to the side to let the workers pass us. I was certain that without him orienting us to the ways of the medina, one of us would have surely lost a toe (or worse).

Hakim has a wealth of knowledge, not only on the present day medina, but also on its history. I was in heaven. I have been in love with learning about the history of ancient cultures and ever since learning about what archaeologists do at the tender age of 8, I knew that was what I wanted to be when I grew up. (Sadly, my high school guidance counselor strongly urged me to pick a more “sensible” profession, like psychology, and not pursue a career among the dusty ruins and artifacts of antiquity. I have a few thoughts about that, but that’s for another post.) So, getting to hear about and see first hand the rich history of the medina made me feel like my worlds had finally aligned. I was completely giddy with excitement as I followed along next to Hakim as he told us what he knew and what he was learning about the medina in his studies at university.

What about the teenager? Was she as thrilled as I was to be steeped in such marvels? Not so much. But she humored me in the way only a teenager can: grudgingly. 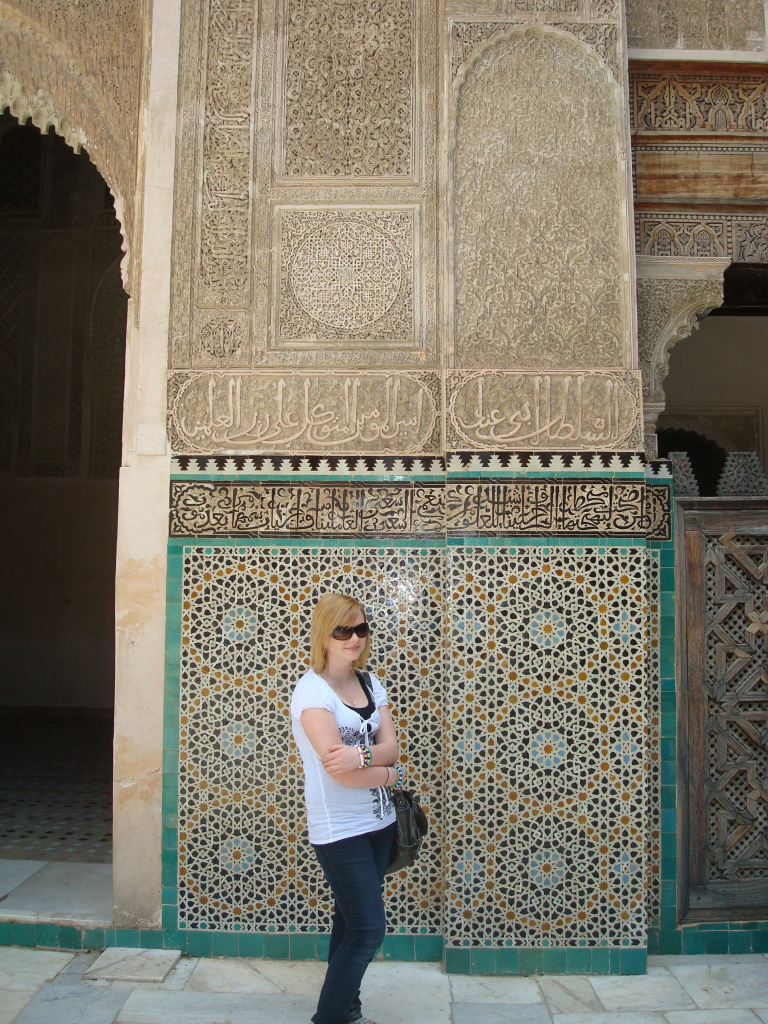 Go stand over there by the 700 year old wall and let me take your photo, o.k. sweetie?

We learned that Fez is divided into three distinct parts: the oldest part, Fez el-Bali or “Old Fez”, contains the core of the medina, or walled part of the city; the Fez el-Jdid or “New Fez”, is named such because it is “only” 700 years old, and contains the Jewish quarter; and the Ville Nouvelle, the newer, modern part, created during the French occupation of Morocco in the during the late 19th and early 20th centuries.

Hakim wanted us to officially begin our tour at the entrance to the medina, at the Bab Bou Jeloud, or blue gate (a photo of which is in this post here). The gate is covered in a blue tiled mosaic on one side because the color of Fez is blue. The other side of the gate is decorated in green tiled mosaic, the color of Islam.

From there we entered the medina and stopped at the remains of an ancient water clock. Scientists have been studying it in hopes of restoring it to full functionality. For now it sits idle, waiting for the day when the water will drip slowly from bucket to bucket, indicating when an hour has passed. 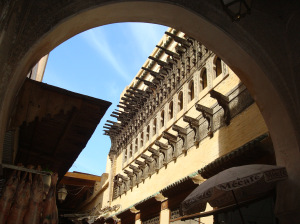 Water clock built in to the side of the building. The wooden protrusions once held vessels that when full would tip over and empty the water into the next vessel, indicating an hour had passed.

Hakim was proud to show us the Bou Inania Medersa, a religious college that was built in the mid-1300’s and is still a functioning college today. Gorgeous and intricate tilework mosaics and carvings of Qu’ran scripture covered nearly every wall. 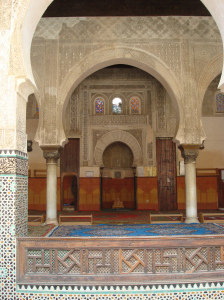 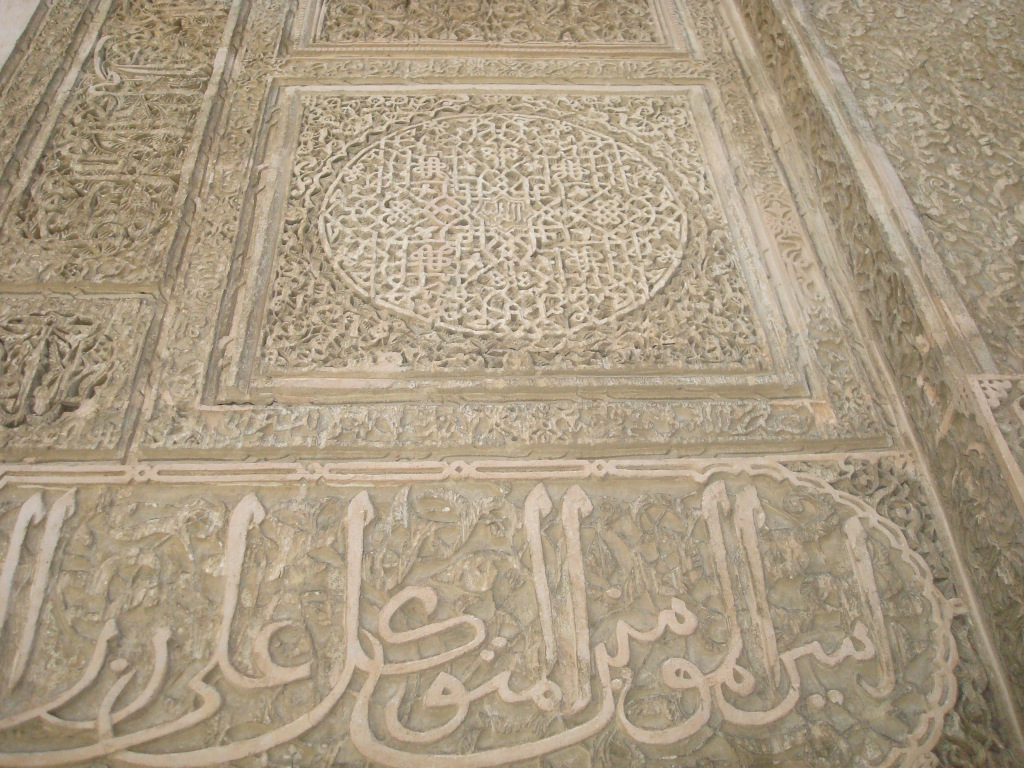 We left the medersa and followed Hakim as he explained that the medina is divided into souks, or distinct areas, based on the wares that are sold there. For example, there is the metal working souk, the weavers souk, the food vendors souk, and so forth. 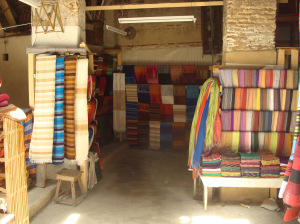 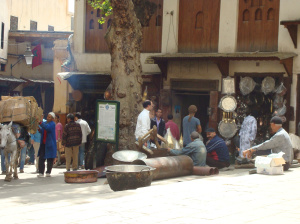 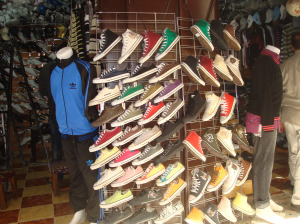 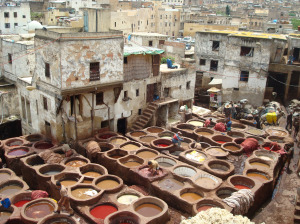 Leather souk and the incredibly smelly tanneries. I won't say much about these other than bird poop is used to make the leather more pliable. And yes, the leather workers are literally steeped in the stuff all day long. Makes you think twice about buying leather.

Interspersed in each of these souks is the neighborhood bakery. According to Hakim, the bakery is the hub of a neighborhood because everyone brings their daily bread to be baked there as most homes do not have ovens. The local baker knows which bread belongs to which family by the hash marks or designs cut into the tops of the unbaked dough by the woman of the house. The local baker is also seen as a kind of matchmaker for many people because he tends to have the pulse on what’s going on in the neighborhood. 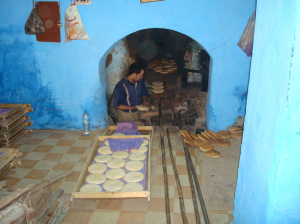 Typical bakery where the neighborhood's bread is waiting to be baked.

Next, Hakim took us to a kindergarten class in the medina. He pointed out the Mickey Mouse above the door as the indication that we were about to enter a school for children. 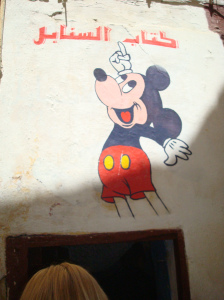 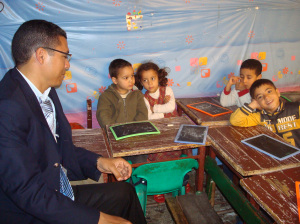 Hakim talking to the kindergarteners, asking them to recite their numbers in Arabic for us. 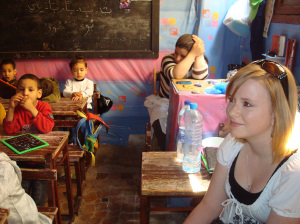 My daughter listening to the kindergarteners teach us to count in Arabic; I believe she was thinking "Oh crap, they want me to repeat after them? I didn't sign up for this..." 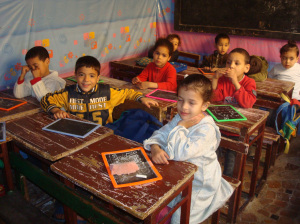 Adorable kindergarteners waiting patiently for us to sing Twinkle, Twinkle, Little Star to them.

Hakim also took the time to explain a little about Islam to us. One of the five basic tenants of Islam is looking out for and taking care of all people in your community no matter who they are, something we saw in action a bit later during our tour. As we walked past a disabled beggar woman, she accidentally fell from the chair she was sitting on and hit the ground with a loud thump. Within seconds, four or five men and women leapt to her aid, helping to settle her back on her chair and making sure she was o.k. Very impressive. 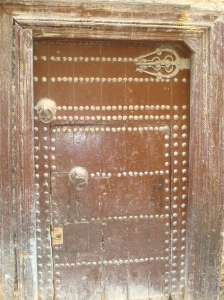 Typical residential door in the medina

We also learned about the architecture common in many homes in the medina. For example, most homes were built with a small, interior receiving room just inside the door (I forget the name) and elaborately carved wooden screens on the upper balconies to shield the women from visitors who were not relatives until the man of the home introduced them. Doors on most homes also have a way for visitors to indicate if they are known to the family. Unfamiliar visitors would often arrive on horseback and therefore be up higher, hence the need to an upper door knocker. The lower door knocker was used for visitors familiar to the family. The large brass, egg-shaped design in the upper right is seen on most doors throughout Morocco and is called the hand of Fatima, or khamsa, which means five in Arabic and refers to the five fingers of the hand. Fatima was one of the daughters of the prophet Mohammed and having this symbol on your door provides protection from the evil eye, a superstition believed throughout the Middle East and many parts of Africa.

Hakim explained that the medina is believed to be the world’s largest contiguous car-free urban area and is listed as a UNESCO World Heritage Site. It is also home to The University of Al-Karaouine, founded in AD 859, the oldest continuously functioning university in the world. We weren’t able to go in due to restoration projects going on, but Hakim knocked on the door and a gentleman who worked there agreed to take my camera and snap a few photos for me. 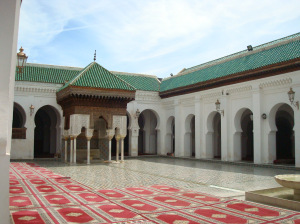 Inside the central courtyard of the Karaouine University. Beautiful red prayer rugs wait patiently in the sun.

After three hours of rubbernecking and ogling, our time with Hakim was up. He led us back to Dar El Hana and left with a gracious and polite thank you for letting him share the medina with him that morning. I was so glad we had the chance to see it through his eyes and hear the stories he had to share. Well worth the time and money.

With a few hours left before our train departed to Rabat, my daughter and I decided to make a go of it on our own (we were intrepid travelers after all) and headed back out into the medina for lunch. Both of us were already realizing that we needed to come back to Fez someday soon. I was so impressed that my daughter went from grudgingly following behind Hakim on the tour to being enchanted by the beauty and mystery that is Fez. 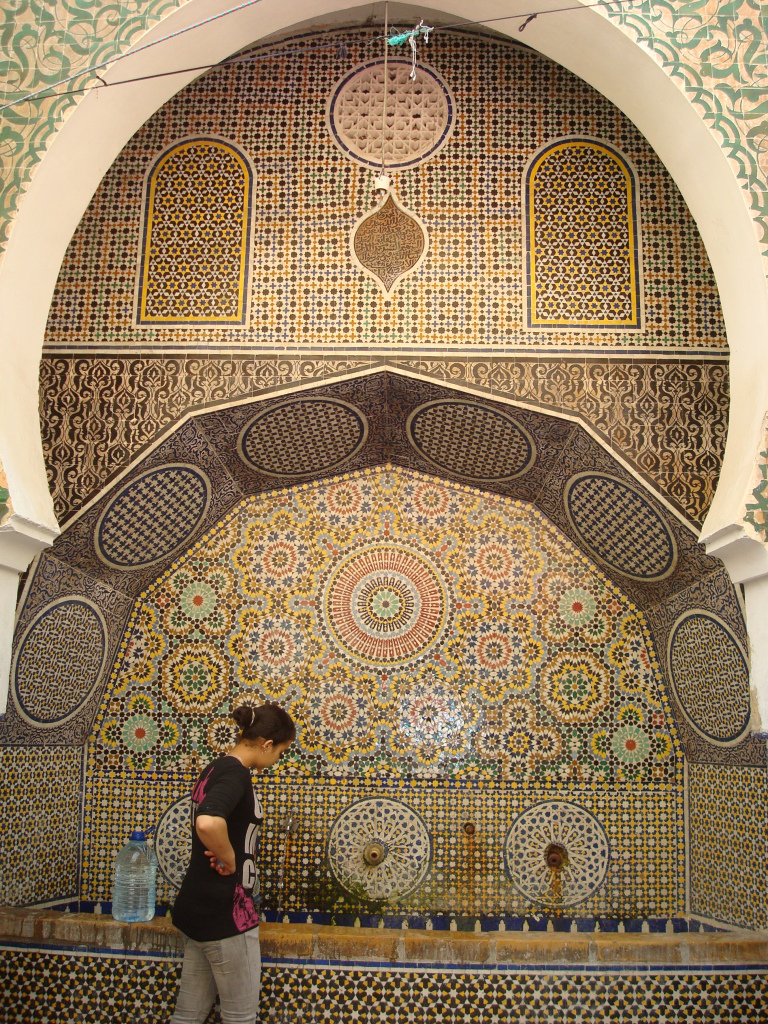 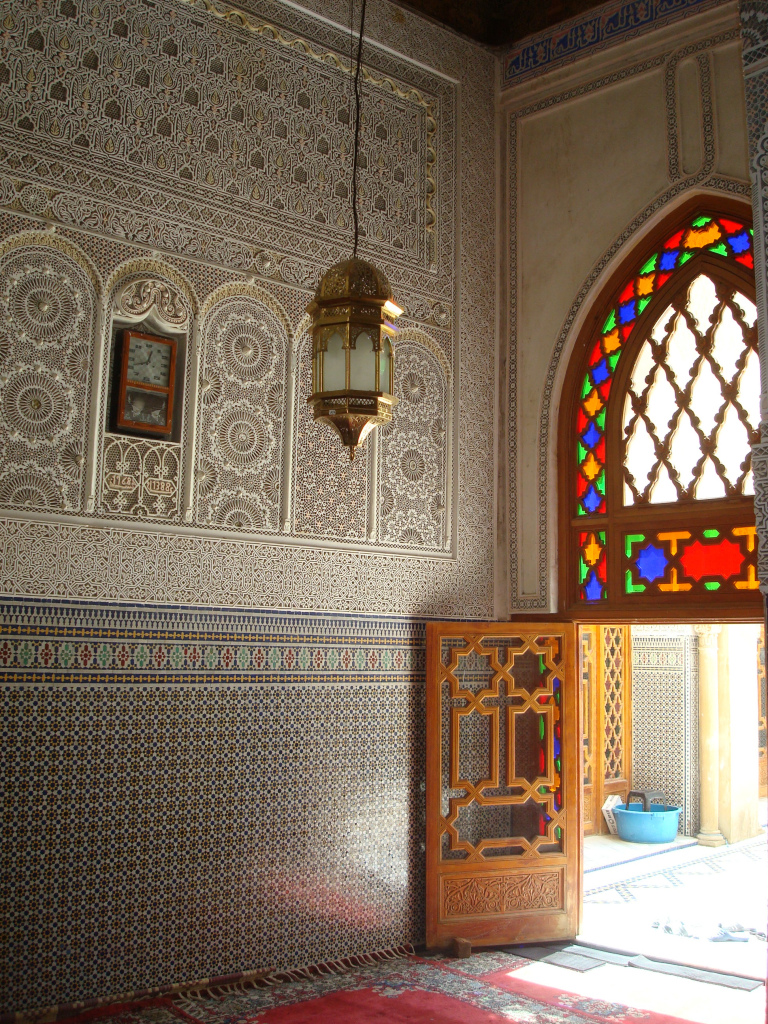 Anteroom of a place of prayer 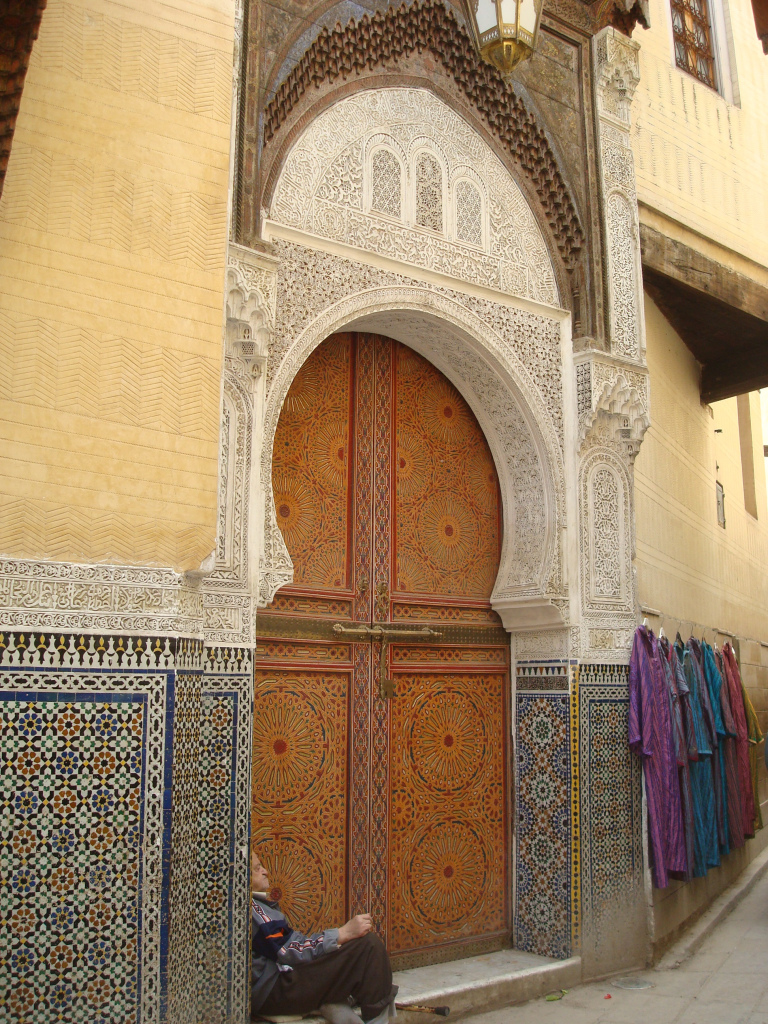 I had a thing for doorways. Simply gorgeous.

If you’d like to learn more about Fez, I highly suggest this book: A House in Fez by Suzanna Clark. She is another Australian expat who moved to the Fez medina and chronicles her adventures in restoring a traditional riad (home with an open central courtyard).

So, dear readers, are there places in the world that you would love to go back to? Where are they? What drew you in and left you wanting more? I’d love to hear about.